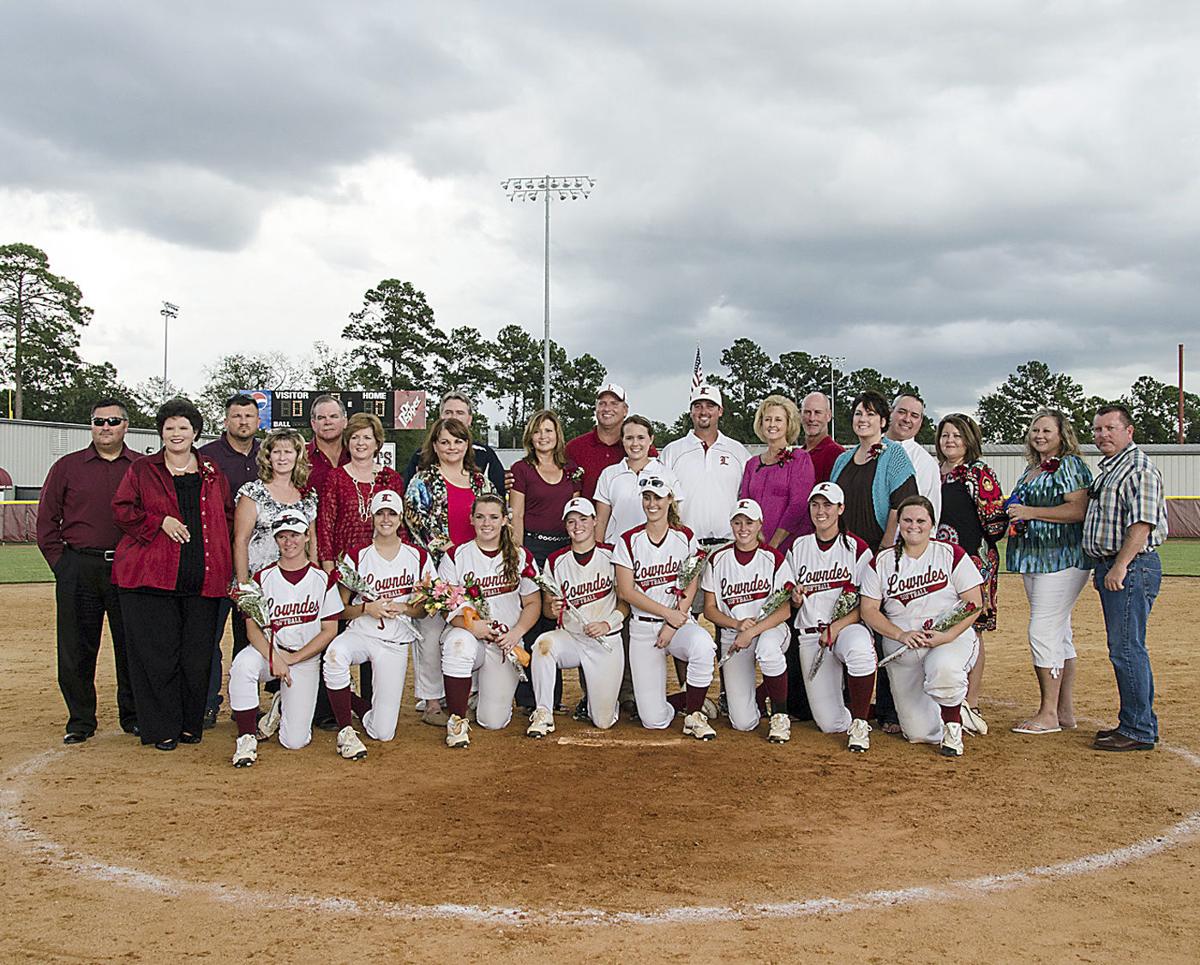 Lowndes’ senior softball players pose with their parents after Senior Day festivities on Thursday at the Morris-Coats Field of Dreams. The seniors were honored in between the Vikettes’ two games on Thursday. 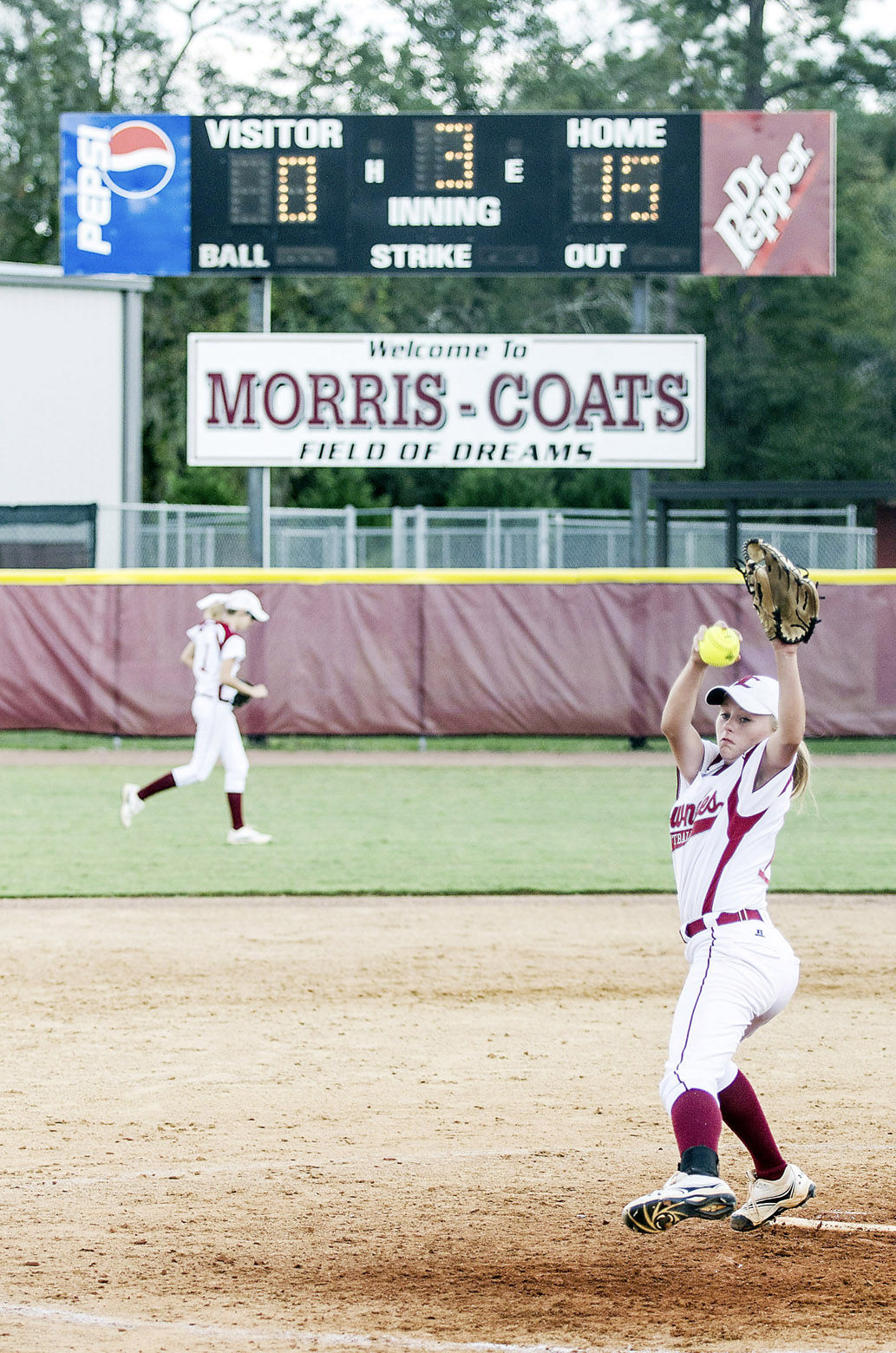 Lowndes’ Tiffany Bishop warms up before the third inning in game 1 on Thursday. Bishop pitched a shutout in game 1 and combined with Victoria Barber on a no-hitter in game 2.

Lowndes’ senior softball players pose with their parents after Senior Day festivities on Thursday at the Morris-Coats Field of Dreams. The seniors were honored in between the Vikettes’ two games on Thursday.

Lowndes’ Tiffany Bishop warms up before the third inning in game 1 on Thursday. Bishop pitched a shutout in game 1 and combined with Victoria Barber on a no-hitter in game 2.

Lowndes’ softball team dominated both ends of its Senior Day doubleheader with crosstown rival Valdosta on Thursday at the Morris-Coats Field of Dreams, and earned two mercy rule victories.

Just about everything went right for Lowndes on Thursday. Its hitters pounded the softball all day long and scored 33 runs in the doubleheader sweep. Tiffany Bishop and Victoria Barber, the Vikettes’ senior pitchers, did not allow a run in either game. Heather Robinson hit a three-run home run in the first game and a grand slam in game 2.

“We pitched well, we threw strikes, we made plays and we hit the ball. That’s what you’ve got to do,” Lowndes head coach Stewart Thomas said.

The Vikettes made quick work of the Lady Wildcats in game 1, scoring four runs in the first inning and 11 in the second to earn a mercy rule victory.

Lowndes’ onslaught began right away. The first four players to bat for the Vikettes in the bottom of the first all reached base and scored. Cara Parker led off the first with a single to left. Chelsea Mefford followed with a single to left center. Becca Prairie grounded to third, but the throw to first was off the mark and got away from the first baseman, allowing Parker to score.

Then Robinson, Lowndes’ cleanup hitter, stepped up to the plate. Robinson jumped on a pitch and drilled it over the fence in left center for a three-run homer, giving the Vikettes a 4-0 lead.

Then Lowndes exploded in the second, crossing home plate 11 times and nearly batting around twice. Leading off the inning again, Parker hit a fly ball that was dropped by the right fielder. Mefford hit a ground ball to short, but the shortstop’s throw was off the mark and Parker scored. After a walk, a fly out and a single by Barber loaded the bases, Kendall Holland lined a single to left, scoring Mefford. Keeli Jackson grounded to third and the third baseman tried to throw home, but her throw hit courtesy runner LaGhia Woods in the helmet and got away. Woods scored. Barber tried to score as well, and the throw was in time to get her, but when she slid, she knocked the catcher’s glove off of her hand and the ball rolled away, putting another run on the board.

Tiffany Bishop followed with a double to left, plating Holland to give the Vikettes a 9-0 lead. Wendy Palmer’s RBI single to left scored Jackson, and after Parker walked, Mefford lined a two-run single to right, bringing home Bishop and Palmer. Then Prairie ripped a double to right, scoring Parker to make it 13-0. After Robinson walked, Barber lined a double to left, and Mefford and Woods came home with the Vikettes’ final two runs, giving them a 15-0 lead.

Bishop shut the Lady Wildcats down in the top of the third, and the game was called due to the mercy rule.

Robinson’s homer gave her three RBIs in game 1. Mefford went 2 for 3 and drove in four runs. Madison Floyd had two hits and drove in two runs.

The Vikettes continued to pound the softball in game 2, putting 18 runs on the board.

Lowndes took control of the game right away, scoring nine runs in the top of the first and building an insurmountable lead before its opponents even had a chance to bat.

Floyd walked, and moved to third on two more wild pitches. Then after Holland walked, she and Floyd executed a double steal, with Floyd sliding home for the run. Two more walks loaded the bases, then Parker and Mefford drew bases-loaded walks, scoring Holland and Jackson. Palmer ran home after an errant pickoff throw. Then Prairie lined a shot between the third baseman’s legs, and Parker and Mefford scored to give Lowndes a 9-0 lead.

In the top of the third, a walk to Parker and a double by Mefford put two runners in scoring position. Parker scored on an error, then Robinson singled in Mefford, extending the Vikettes’ lead to 11-0.

Lowndes closed out another mercy rule victory with a seven-run fourth inning. Bishop reached on an error and scored on Parker’s one-out single. A single by Mefford and a walk to Woods loaded the bases.

Then Robinson saw a pitch she liked, and hammered it. The ball sailed over the fence in left center, over a car parked behind the fence and nearly reached the batting cages. It was a grand slam, and it gave the Vikettes a 16-0 lead. It was her seventh home run of the year.

Three batters later, with runners on second and third, Summer Barker lined a single into center field, and Floyd and Jackson ran home to make the score 18-0.

The game was halted after four innings, due to the mercy rule.

Thursday was Senior Day at Lowndes. In between games, Lowndes’ eight seniors — Cara Parker, Chelsea Mefford, Heather Robinson, Kendall Holland, Keeli Jackson, Victoria Barber, Tiffany Bishop and Ashley Blodgett — were honored, along with their parents. Every senior presented Thomas with a miniature disco ball as a token of their appreciation to him.

“They’re a great group of girls,” Thomas said. “They’ve bought into (our program) 100 percent. And they play hard. Each one of them are passionate about the game.

“I couldn’t be more proud of them.”