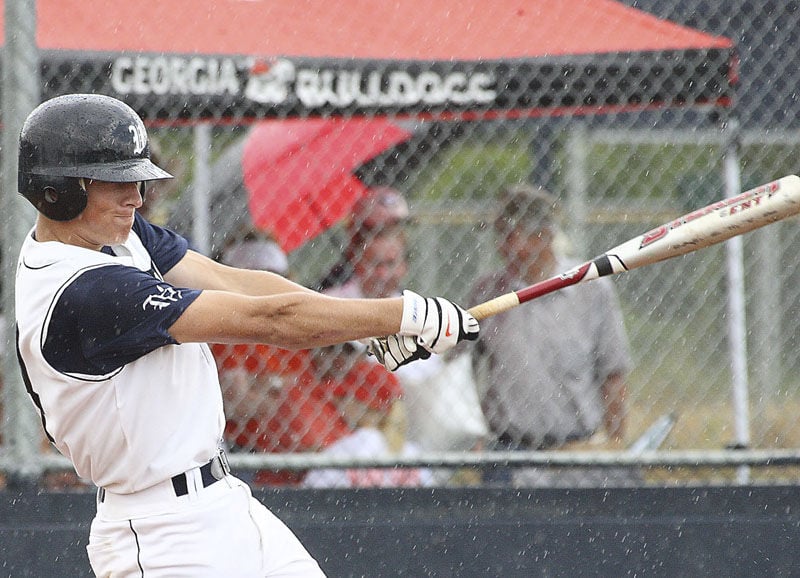 Valwood School’s Todd Baker hits a single against the Christian Heritage Lions in game 1 of a best-of-3 series on Friday at Valwood. Christian Heritage won the game, 4-2, and wound up advancing to the semifinals of the GISA Class AA playoffs. 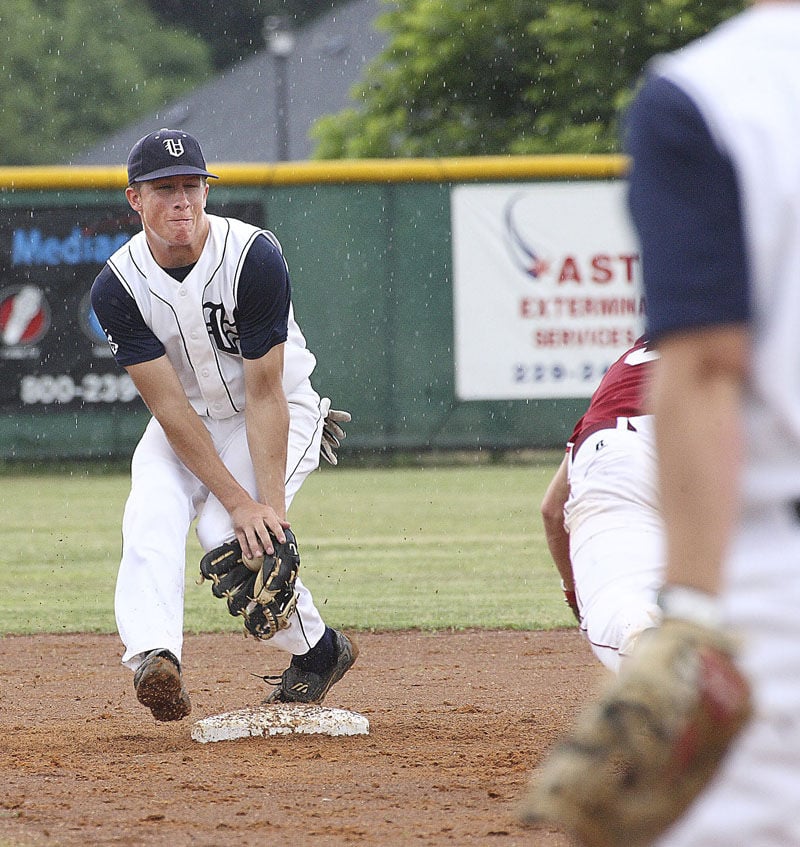 Valwood second baseman Casey Guilliams fields the ball and gets an out against Christian Heritage Friday afternoon. 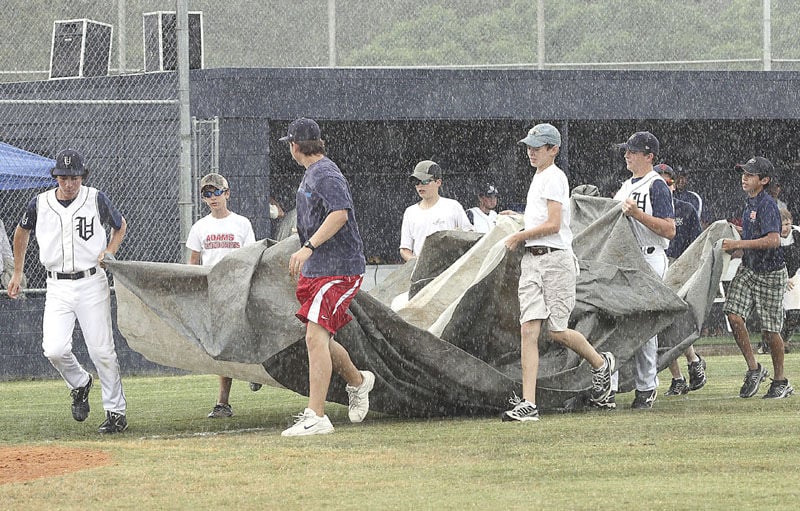 Valwood baseball players carry out the tarps to cover the field during a rain delay Friday afternoon.

Valwood School’s Todd Baker hits a single against the Christian Heritage Lions in game 1 of a best-of-3 series on Friday at Valwood. Christian Heritage won the game, 4-2, and wound up advancing to the semifinals of the GISA Class AA playoffs.

Valwood second baseman Casey Guilliams fields the ball and gets an out against Christian Heritage Friday afternoon.

Valwood baseball players carry out the tarps to cover the field during a rain delay Friday afternoon.

VALDOSTA — The Valwood Valiants’ improbable playoff run came to an end on Friday at the hands of the Christian Heritage Lions. The Lions won the first two games of a best 2-out-of-3 series, 4-2 and 9-2, at Valwood’s baseball field. It was a remarkable season for the Valiants. They advanced to the quarterfinals of the GISA Class AA playoffs for the first time since 1993, and they did it with six freshmen and two eighth graders. There were only four seniors on the team. “It was nice. We hadn’t been to the playoffs since 2001,” Valwood head coach Brett Martin said. “I thought it was big. Our seniors deserved it. And it was good to get the team here, because we have so many young kids. Now they have a taste of it. Getting playoff experience, and showing them how it is, will hopefully make them want to come back.” Playing in front of a large crowd with a lot of the student body watching, since the series started at 1 p.m. and school let out early Friday, the young Valiants appeared nervous. In the top of the first inning of game 1, the Valiants committed three errors, which allowed two runs to score. “I think it was playoff jitters,” Martin said. “We had an eighth grader and a freshman make an error. I think we were just nervous, but we worked it out and ended up playing well.” After a rough first inning, Valwood settled down behind ace left-hander Carter Karras, who worked easily through the second and third innings. The Valiants tied the game 2-2 in the fourth inning on a costly error by Lions shortstop Gray Hutchinson. With two outs, Troy Woodward drew a walk and moved up to second when Deron Smith was hit by a pitch. Both runners moved up on a wild pitch and came in to score when Karras hit a ground ball that went through Hutchinson’s legs. However, the Lions retook the lead in the bottom of the fourth. Rollins Jolly led off with a double and scored on a single by Tommy Malerbi to make it 3-2. Besides scoring two runs on Hutchinson’s error, the Valiants couldn’t do much against Lions starter Jarred Cronan. Cronan was cruising along, but in the bottom of the fourth, he injured his shoulder sliding into second base. He was removed from the game, and Hutchinson took over on the mound. Hutchinson worked the final three innings, allowing just one hit, Valwood’s only hit of the first game. In the top of the seventh, the Lions added an insurance run on an RBI ground out by Landon McClure to make it 4-2. Woodward struck out with a runner on second to end the first game. Karras took the loss after pitching all seven innings and allowing four runs and 12 hits. Two of the four runs were earned. He struck out eight. “We just didn’t give him any support,” Martin said. Todd Baker went 1-for-3. For the Lions, Cronan picked up the win after giving up no earned runs and no hits in four innings. Catcher Parmalee Ward went 3-for-4 for the Lions. In the second game, the Lions put the pressure on the Valiants by scoring four runs in the first inning off of freshman starter Jake Reeves. Hutchinson started the bottom of the first for the Lions by flying out, but the Lions loaded the bases on a pair of walks and a hit. McClure, the Lions’ starting pitcher, helped himself by knocking a two-run double to make it 2-0. Daniel Groce then delivered an RBI ground out, and McClure ended the first-inning scoring by coming home from third on a passed ball. Unlike Cronan and Hutchinson in game 1, McClure was tested by the Valiants on the mound in game 2. Through the first five innings, McClure gave up no runs, but Valwood had runners on the corners with one out in the first and had the bases loaded with two outs in the third. Both times, McClure retired Adam Dye to end the inning. The Lions scored three more times in the fourth to make it 7-0 and put the game out of reach. Valwood battled to get on the board, though. In the sixth, Hutchinson booted two ground balls at short to allow the first two Valiant batters to reach safely. Both base runners, Wyatt Harris and Reeves, advanced to second and third on a wild pitch, and Harris scored on an RBI ground out by Reynolds Henry. Smith followed with an infield single that scored Reeves to make it 7-2. The Lions plated two more runs in the bottom of the sixth to make it 9-2, and then Jolly, the Lions’ center fielder, made a diving catch on a ball to end the game, series and Valwood’s season. Karras ended his senior season by pitching the last two innings. He struck out five of the six batters he retired. Alex Waldron went 3-for-4 at the plate in game 2.