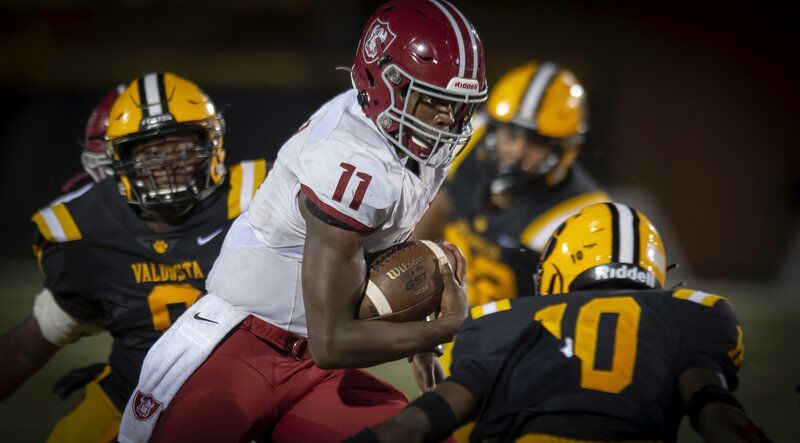 Dave Sundin | Special to the Times Jacurri Brown runs during the 2020 Winnersville Classic. Brown was awarded the Most Outstanding Palyer award for his efforts. 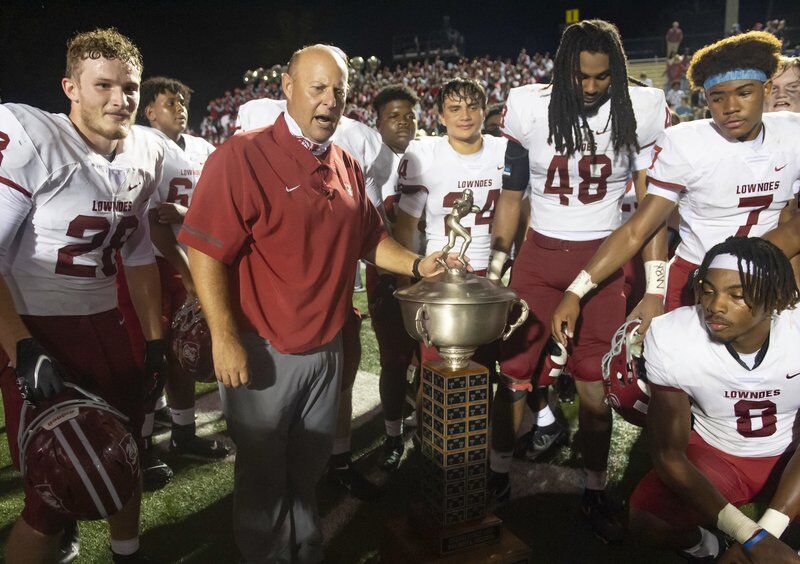 Dave Sundin | Special to the Times Lowndes head coach Jamey DuBose and seniors pose with the Winnersville trophy after the 33-21 defeat of crosstown rival Valdosta. 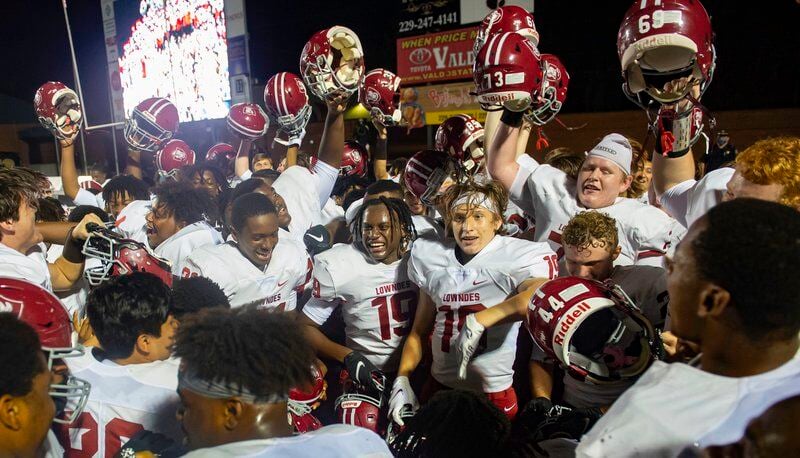 Dave Sundin | Special to the Times The Lowndes Vikings celebrate after winning the 2020 Winnersville Classic at Bazemore-Hyder Stadium. 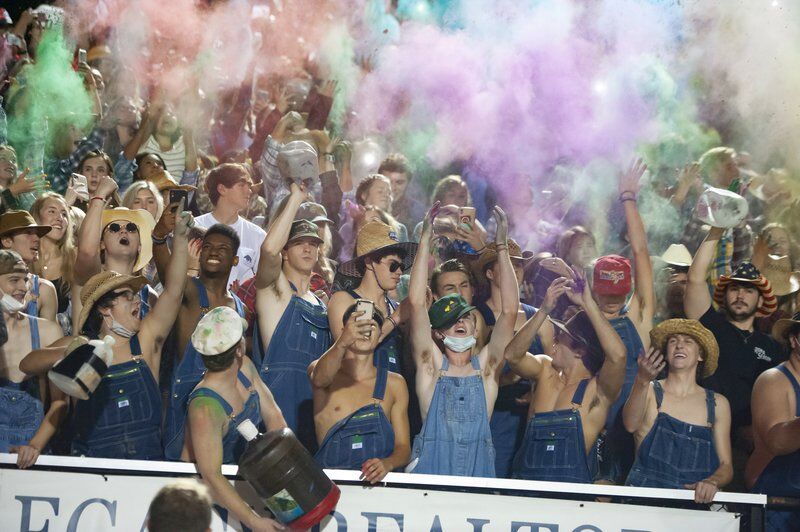 Dave Sundin | Special to the Times The Lowndes student section throws colorful powder into the air ahead of the 2020 Winnersville Classic.

Dave Sundin | Special to the Times Jacurri Brown runs during the 2020 Winnersville Classic. Brown was awarded the Most Outstanding Palyer award for his efforts.

Dave Sundin | Special to the Times Lowndes head coach Jamey DuBose and seniors pose with the Winnersville trophy after the 33-21 defeat of crosstown rival Valdosta.

Dave Sundin | Special to the Times The Lowndes Vikings celebrate after winning the 2020 Winnersville Classic at Bazemore-Hyder Stadium.

Dave Sundin | Special to the Times The Lowndes student section throws colorful powder into the air ahead of the 2020 Winnersville Classic.

VALDOSTA—This one was just a little sweeter.

On top of the Vikings seniors getting a sweep against the Wildcats, they also spoiled their homecoming in Lowndes’ 33-21 Winnersville Classic victory.

The Vikings moved up to 5-0, while the Wildcats were knocked to 2-2 after the contest.

Quarterback Jacurri Brown took home the 2020 Winnersville Classic Most Outstanding Player honors, but the defense fought through some adversity led by senior linebacker Jalon Baker with his two interceptions.

Jacurri Brown and Dominque Marshall were responsible for both touchdowns scored by the Vikings in the first half.

On their first drive, Brown found Marshall headed to the endzone on a post route to get a 33-yard score, striking first in the Winnersville Classic.

When the Wildcats got possession of the ball with seven minutes left in the first quarter, they were stymied; being forced to punt after a three-and-out.

Beginning on their own 38, the Viking offense marched 43 yards to the Wildcat’s 19-yard line, before Brown and Marshall connected again for a touchdown to give the Vikings a 13-0 lead with 2:02 remaining in the first quarter.

Less than a minute later, Wildcats quarterback Amari Jones was picked off by Jalon Baker.

“Winnersville. That was his motivation,” Vikings Head Coach Jamey DuBose said about the senior linebacker. “He’s a ballplayer and always around the ball making tremendous plays.”

But the Vikings could not get six after many unsuccessful shots to the endzone.

They settled for a Preston Hart field goal to nab a 16-0 lead to end the first quarter.

In the second quarter, only three points were scored from another Hart field goal. The Wildcats showed signs of life before the break, with their defense holding Lowndes from getting in the endzone and the Wildcat offense making strides despite not scoring.

The Wildcats came back in the second half with a vengeance, scoring 14 unanswered points on the Vikings.

Ramecia Burgman knocked down a Jones pass in the endzone, but the Vikings were flagged for roughing the passer.

A couple of plays later, Jones would run in a two-yard keeper to get the Wildcats their first points on the board.

As the fourth quarter began, the Wildcats still were building their momentum.

When Tristin Bohler checked in at quarterback for Brown after his helmet came off during a play, he threw an interception to Valdosta’s Maxwell Cherelus near the Wildcat’s sideline.

The turnover was followed by roughing the passer and offsides penalties called on the Vikings, giving them good field position to reach within striking distance.

Aalah Brown beat Burgman to catch a 24-yard receiving touchdown from Jones to get within five with more than nine minutes remaining in game action.

The Wildcats defense began to get stingy, but it wasn’t enough as they allowed Jacurri Brown to take it to the house on third-and-eight for a 50-yard rushing score to gain a 26-14 lead with 7:54 left.

The teams traded the ball back to each other.

After the Vikings pushed the Wildcats back to their 5, forcing them to punt, Jacurri Brown fumbled a carry to give the ball right back to the Wildcats.

Shortly after, Jalon Baker retrieved his second interception of the night from Jones with four minutes left.

“We’ve been ready all week,” Baker said. “It feels good to come out here and four-peat against a rival. We had a big performance and the team showed out.”

The Vikings could not capitalize with possession of the ball, but the Wildcats were ready to make its final run at a comeback victory.

They made back-to-back big plays.

First, Jones found Javonte Sherman for a catch over corner back Tylar Belcher.

On the very next play, the Vikings blew the coverage and allowed a 33-yard touchdown from Jones to Nevin Spivey to bring their deficit to five once again with 1:43 left.

Jacurri Brown wasted no time, scoring a 64-yard breakaway scramble with 50 seconds left to get a 12-point lead.

“This has been our fourth war out of five games and our guys are game tested,” DuBose said after the game. “We’ve beaten the 6A No. 1 and 2 teams. We’re finding ways to win, and we held our composure in hostile situations.”

“It was a good relief like air bursting through a balloon,” Jacurri Brown added. “They were talking a lot of trash before the game. When someone is talking trash before a fight, they are scared. We blocked that out and made a statement.”

Though DuBose secured his first Winnersville victory, he wanted to do it for the seniors.

“The biggest thing was to get the seniors their fourth win in a row,” DuBose said. “I wanted to do everything within my power to give them a chance to walk out a winner four times in a row to beat their biggest rival in the nation.”

Next, the Vikings will be back at the Concrete Palace to take the field against 0-5 Alcovy on October 16.