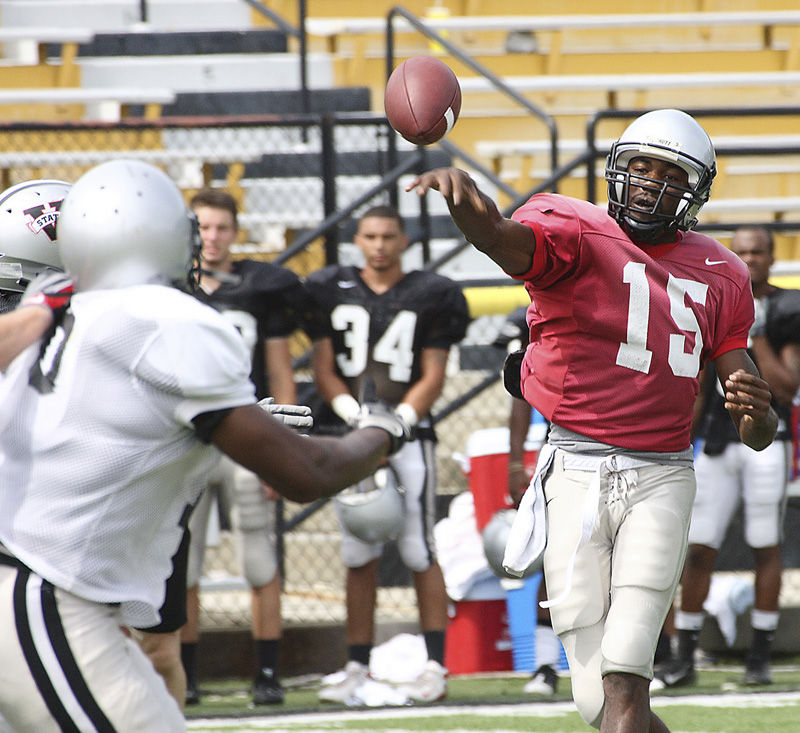 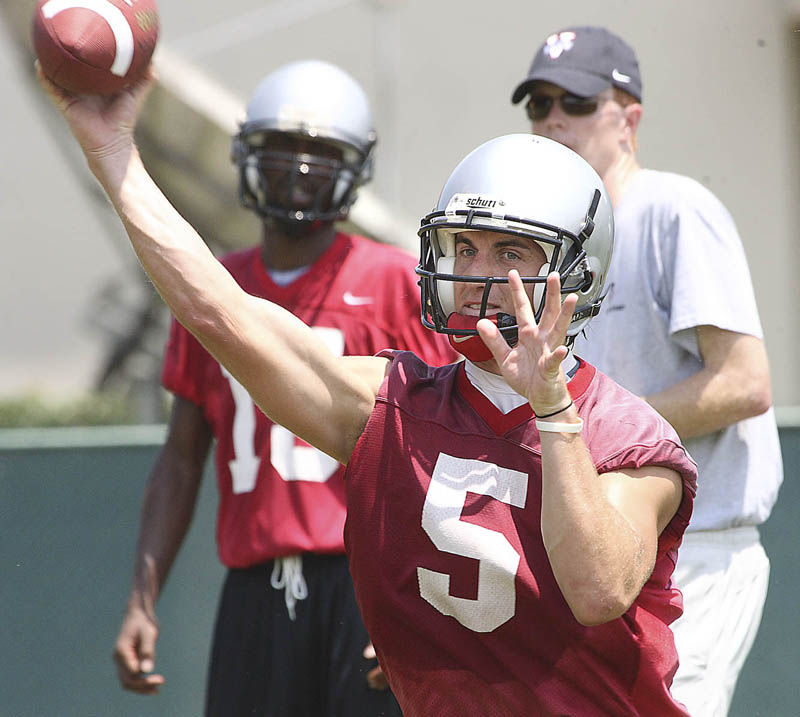 VALDOSTA — Another day passed at Valdosta State football practice without head coach David Dean announcing a starting quarterback. While a starter hasn’t been named, the quarterback competition has sorted itself out. Indiana transfer Kellen Lewis and junior Russ Callaway are battling exclusively for the starting job and getting the snaps with the first team offense. “Everyone knows there’s a competition going on right now,” Lewis said. “The competition is bringing out the best in both people. I have to give props to Russ because when I first got here he was the guy teaching me the plays, and now I’m trying to take his job. Both of us have been out here competing everyday and kind of learning and trying to show we deserve to be the starter. I feel like we can’t go wrong either way.” Dean was hoping to figure out the starter after Saturday’s scrimmage, but the scrimmage was cut short due to lightning. Dean then hoped to make the announcement on Tuesday after Monday night’s scrimmage, but Lewis couldn’t make the scrimmage because he had class. “It’s very frustrating because these guys are tired of answering the question,” Dean said. “We explained it to them. We want them to understand that we’re trying to make the best decision for the football team. They’re tired of answering the question of who’s going to be the starter, who’s going to be this, who’s going to be that. I think ultimately the bottom line is we have to make the right decision.” The Blazers will continue to practice throughout the week. By the end of the week Dean finally thinks he’ll be able to make the decision. “We’re going to look at every facet of the game,” Dean said. “Checks at the line of scrimmage, protection calls, short throws, long throws, how does he manage the game, how does he manage the team. We want to make sure we’re picking the right guy.” With Lewis and Callaway battling for the starting job, Dean said the Blazers will probably redshirt junior transfer Jimmy Coy and freshmen Brett Whitmire and Stephen Warren. He added that Austen Roberts will be the third string quarterback. As far as the battle for No. 1 goes, the delay of announcing a starter has given Lewis more time to learn an offense which Callaway has worked in for two seasons. “I came in with the mindset to not come in and expect anything or say ‘Because I’ve done this at Indiana I deserve to be the starter,’” Lewis said. “It’s a level playing field. Everyone is at zero. Right now I’m just trying to prove that I deserve to be on the roster.” Dean said he’s waiting to see if Lewis can put the Blazers in the right situation when he has to check or relay sideline calls to the offensive line and receivers. “He may have the greatest ability of anyone in the world, but if he can’t do all that and function in 40 second then we’re in trouble,” Dean said. “We want to make sure he can do that.” Callaway has continued to amaze the coaches and players in his quest to get back on the field after tearing his ACL in spring practice. He sports a big brace on his right knee, but his mobility and ability to run don’t appear to be an issue. Most people thought he’d have to be redshirted after the tear, but now he’s in the thick of race for the starting job. “Whoever we choose I’ll feel pretty good about,” Dean said. The Blazers open the season on Aug. 29 against Newberry at Bazemore- Hyder Stadium.