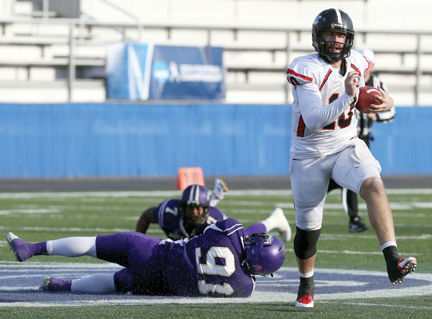 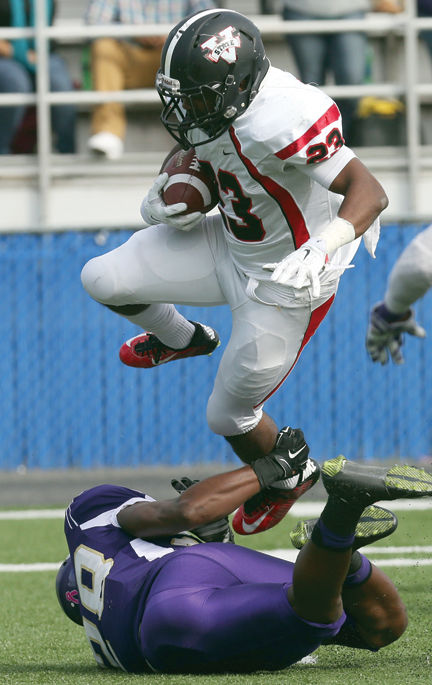 FLORENCE, Ala. — Valdosta State rushed for a school-record 395 yards against North Alabama en route to a 33-31 victory on the road in a Division II first round playoff game between Gulf South Conference rivals on Saturday.

Labeled as a battle between the two best defensive teams in the GSC before the game, it was the offenses that stole the show at Braly Stadium.

Entering the game both teams combined to hold opponents to an average of 670 yards per game, but Valdosta State and North Alabama totaled 400 yards in the first quarter alone on Saturday — finishing the game with a combined 1,152 yards of offense and 64 points.

"That's just typical Gulf South Conference football," said VSU coach David Dean, whose fifth-seeded Blazers travel to face the South Regional’s top seed Lenoir-Rhyne at noon next Saturday in Hickory, N.C. "You never know what's going to happen from week-to-week. The great thing about this is, there are so many great athletes in this conference all the way across the board. You may get games like we had a couple of years ago here, 5-0, and then you may get those 33-31 shootouts. You just don't ever know.

"As an offensive player, and a defensive player, you've just got to play every play like it's your last. You've got to continue to play for a full 60 minutes and whatever happens in the game you've got to be ready to adjust to it."

Anthony Pistelli's 18-yard field goal gave the Blazers a 33-31 lead with 3:19 remaining in the game and Kenny Murphy's interception sealed the win as both teams rewrote its respective school's record books, along with a few career highs, in a back-and-forth contest.

The Lions got the scoring started first when quarterback Luke Wingo found Khyle Jackson behind the Blazers' defense on their first play of the game for an 88-yard touchdown pass and a 7-0 lead.

Valdosta State answered back with a long drive of its own, culminating in a field goal, but Wingo's 7-yard touchdown run on the ensuing drive put North Alabama up 14-3 before reaching the midway point of the first quarter.

Valdosta State scored its first touchdown on a 12-yard pass from Jake Medlock to Chris Anderson with 1:33 remaining in the quarter, and after giving up 199 yards in the opening quarter, the Blazers began to settle in defensively.

Over the next 15 minutes of game time VSU held UNA to 59 total yards, including negative-3 yards on eight rushes, as the Blazers took their first lead of the day on a 6-yard run by Medlock before nursing the 17-14 advantage until halftime.

Earlier this season Wingo set a career-high in passing yardage against Shorter with 321 yards, but on North Alabama's second possession of the second half Wingo's 6-yard touchdown pass to Lamonte Thompson gave the Lions a 21-17 lead and Wingo a new career-high with 352 yards. Wingo would finish with a school-record 511 yards and three touchdowns to just one, albeit costly, interception.

Valdosta State and North Alabama swapped short touchdowns on the next two possessions before Pistelli's first of four field goals traveled a career-high 52 yards to bring the Blazers within a single point heading into the fourth quarter.

The Lions had little trouble moving the ball through the air, as evidenced by the school-record passing yardage, but UNA's inability to run the ball against the "Black Swarm's" front seven made it difficult to run out the clock and win the game. UNA lost a yard on its two fourth-quarter rush attempts.

On the other side of the ball, the Blazers faced little to no resistance in their run game as they racked up 323 yards through three quarters before continuing to punish the Lions at the line of scrimmage in the final quarter.

"We worked on it all week, working on the rushing game" said Medlock, who returned to the VSU offense after missing the last two games of the regular season with a knee injury. "Coming into the game we knew we had to step it up big in the rushing attack and the offensive line did an absolutely wonderful job setting up the holes. Then a couple of tweaks to go against their defense, and Austin (Scott), myself and Ced(ric O’Neal) did a great job today."

Although Valdosta State managed just six points in the game's final 14 minutes, the Blazers rushed for 72 yards while holding the ball for nearly 11 minutes before taking a 33-31 lead with little more than three minutes remaining.

Wingo and the North Alabama offense took the field needing just a field goal to move to 5-0 all-time in the first round of the playoffs, but on the first play of the possession the junior quarterback made his first costly mistake of the day.

"It was just a poor decision on my part," Wingo said. "The linebacker had so much depth and I planned on the receiver just cutting up under him and by time I threw it he wasn't. That's why I didn't step into it well."

Said Murphy on the game-sealing play: "He ran an over route on the middle and I was turned around. Right when I turned around the ball was coming. I just knew I had to make a play for the team."