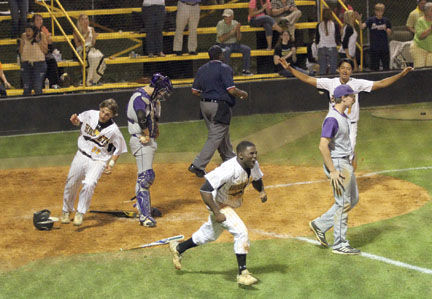 Cook’s Hunter Harrell (22), Stacy Sailor and starting pitcher Sam Goberdhan, right, celebrate after Harrell scored the winning run in the bottom of the 11th inning Tuesday against Fitzgerald, clinching a home playoff series for the Hornets. 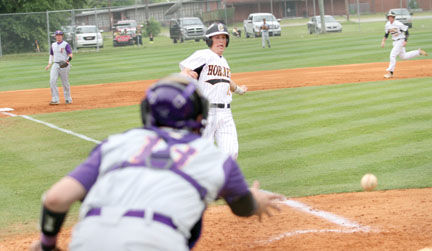 Cook’s Dalton Rentz slides into home to score the Hornets’ first run on a passed ball as Fitzgerald catcher James Clements tosses the ball to home.

Cook’s Hunter Harrell (22), Stacy Sailor and starting pitcher Sam Goberdhan, right, celebrate after Harrell scored the winning run in the bottom of the 11th inning Tuesday against Fitzgerald, clinching a home playoff series for the Hornets.

Cook’s Dalton Rentz slides into home to score the Hornets’ first run on a passed ball as Fitzgerald catcher James Clements tosses the ball to home.

Fitzgerald and Cook clashed Tuesday night in an attempt to secure the No. 1 and No. 2 seeds in Region 1-AA, respectively, which is why both teams were willing to do anything it took to win the 11-inning marathon.

But the Hornets were the ones to get the job done, winning 2-1 in walk-off fashion.

Fitzgerald's Johnny Croley and Cook's Sam Goberdhan met in a duel between aces and neither left-hander disappointed. Croley struck out 11 Hornets in eight dominant innings and Goberdhan fought through some early-inning difficulties to pitch six strong innings of his own.

"Those guys have the best pitching staff in the region, everybody knows that, and we got to see two of their good ones tonight," said Cook coach Cleve Edwards. "I knew going in that if they win tonight, more than likely they're going to win the region, so I knew they'd come at us with their best arms, and they did, but they got ours too.

"It was the definition of a pitcher's duel tonight."

Croley was in-control from the onset of the game, getting through the first inning with just one baserunner before striking out the side in the bottom  of the second.

While Croley cruised, Goberdhan struggled out of the gate. Goberdhan faced six batters in the first inning and, because of some bad luck, another six in the second, but he found a way to limit the damage to a single run.

"The first two innings he struggled a little bit, but once he settled down he looked as good as can be," said Edwards. "He looked like the Sam we know."

The Purple Hurricanes loaded the bases against Goberdhan in the second, but it’s hard to fault him for the way it happened.

Goberdhan struck out the first two batters, but Haven McMillian dropped Blake Lott's third strike, allowing Lott to reach base when McMillian's throw sailed into the outfield. Goberdhan hit the next batter to put two runners on before Demond Lampkin's swinging bunt loaded the bases with one out.

With bases loaded and only one out, Fitzgerald had the chance to bust the game open early, but Goberdhan was able to get out of the jam by striking out Croley before getting a groundout to first.

Croley seemed as he would continue to slice through Cook's lineup as he quickly got the first two batters of the third before he finally ran into a bit of trouble.

Cook put runners on first and second with two consecutive singles before a passed ball gave the Hornets two runners in scoring position with two outs. Croley's pitch to Parker Bennett was too high for catcher James Clements to reach, giving Dalton Rentz a chance to slide into home underneath the tag to tie the game at one.

Croley walked Bennett, giving Cook runners at the corners, but a loud crack off of Maysoe Wiley's bat would land in the glove of Fitzgerald's center fielder for the third out.

From that point on, both staffs' ace put their respective team on their backs.

Croley only allowed four baserunners in his next five innings of work — three via walk — as he mowed down Cook hitters.

Thanks to stolen bases and advancing the runner, Cook was able to put a man on third base twice in that time frame, but the Hornets couldn't connect on a hit to bring the runner home.

Fitzgerald had more difficulty against Goberdhan in his final four innings of work. Goberdhan didn't allow a runner past first base until two singles put runners on the corners in the top of the sixth with two outs, but a fly-out to center ended the threat.

As the game wore on the 1-1 tie would not relent; both teams struggled to get much of anything going on the bases late as the game headed into extra innings.

"I think both teams probably squandered some opportunities to put the game away, but we made the plays defensively and we pitched it good enough to stay in the ball game," Edwards.

It looked like the Hornets' resiliency would pay off in the bottom of the ninth when Gunner George walked with one out and reached third on two stolen bases, but after a strikeout and a walk, Rentz was called out on a bang-bang play at first with George representing the winning run coming in from third.

The game showed no signs of ending as the bottom of the 11th rolled around; besides Cook's ninth inning, neither team had more than one player reach base in extra innings.

But just when the game look liked it may go all night, the Hornets sent everyone home.

Hunter Harrell reached base on a single against Clement and took second on a bunt before George's hit found the ground on the outfield to bring Harrell around from second for the winning run.