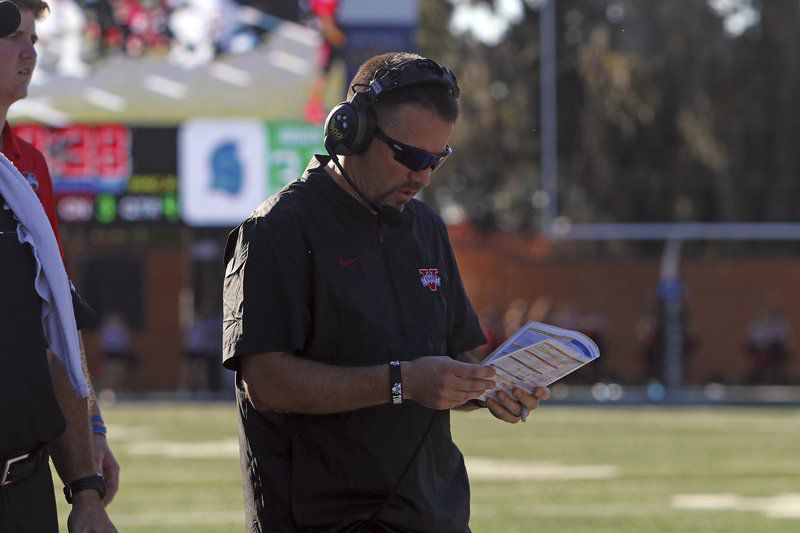 Valdosta State head coach Gary Goff looks at his play sheet during the third quarter of an NCAA Division II Second Round game against West Florida Saturday at Bazemore-Hyder Stadium. 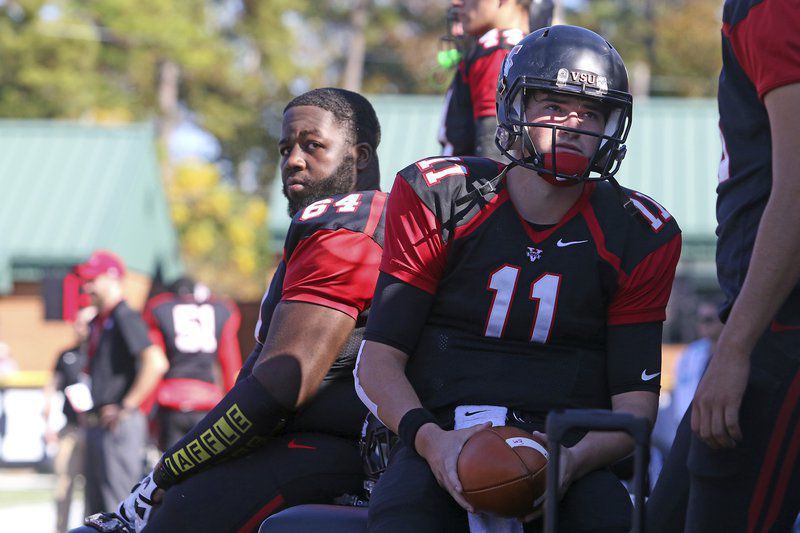 Valdosta State head coach Gary Goff looks at his play sheet during the third quarter of an NCAA Division II Second Round game against West Florida Saturday at Bazemore-Hyder Stadium.

With how they were playing, it was bound to catch up.

Their first loss since November 4, 2017 happened on Saturday against West Florida in the Second Round of the NCAA playoffs –– shattering Valdosta State’s chances of repeating as national champions.

The game ended in dramatic fashion.

VSU had six seconds to score. With a penalty against UWF they were at the 50, then a Brian Saunds catch on the sideline left just half a second on the clock after he went out of bounds.

Enough time for one more play.

All of a sudden, that half a second was gone off the clock before the teams even lined up and the referees called the game.

Despite the questionable conclusion, VSU shouldn’t have been in that position to begin with.

Want to know what happened?

The predictability, conservativeness, and just the lack of aggression offensively. These patterns didn’t just start against West Florida, these began at the start of the season.

Yeah, they were winning by big margins but it was obvious. They relied on the run and dialed back the aggression of throwing deep balls all while having the same weapons from last year’s lethal passing game. Talent carried them until they met a team that could matchup with them.

Air raid offense? That’s what they call it, but I could barely notice.

First off, Jamar Thompkins and Seth McGill are exceptional talents at running back. But it wasn’t their day to shine on Saturday.

West Florida played VSU a few weeks before their playoff rematch. They knew how good VSU’s running game was first hand, so they adjusted. Allowing just 166 rushing yards on Saturday. VSU’s season average is 260 rushing yards per game and that’s including this loss.

But the running backs weren’t even the problem. It was the fact that the coaches relied on handing the ball off when they have weapons to take the top off. Plus, both backs are great receivers out the backfield. Why did McGill and Thompkins combine for just three catches, I have no clue.

Riddle me this—how do you set up your running game when most of your passes are directed to the flats for short yardage.

Mind you, in the first quarter Lio’undre Gallimore had a 69 yard catch and run touchdown that was down the middle of the field.

After that, they didn’t feed him enough. Instead, the extremely athletic Ivory Durham was consistently targeted and he’s the backup quarterback. After awhile, it seemed like every time Durham lined up Rogan Wells threw him the ball. For a short conservative throw, of course.

Throwing to the flat and then running the ball up the middle is not mixing anything up. Even if they were playing it short to eventually air it out deep, they didn’t. They couldn’t keep West Florida honest, want to know why? Check this out:

Durham finished with four catches for 28 yards, I don’t know the exact amount but he was targeted at least six or seven times. He just couldn’t get loose but they stuck with him.

Meanwhile, VSU’s number one option, Gallimore finished with seven catches for 162 yards and two touchdowns. Each touchdowns was for 60-plus yards making for over 130 yards on just two deep throws.

To make it even worse, Gallimore’s touchdown catches were towards the middle of the field. Why they didn’t continue attacking the middle? I have no explanation.

Handoff, throw to the flat, handoff, throw a short pass. That seemed to be the pattern for the first half and most of the game.

When the Blazers had their backs against the wall they played with the heart of a champion. The players fought back..

They wanted it, yet the coaches didn’t set them up to win like they could’ve.

Wells threw for 335 yards and two touchdowns. Looks great on paper, but lets factor in that both touchdowns and 133 of his total yards were to Gallimore on those two deep throws. When you negate that, it’s just 202 yards on 21 completions from Wells.

Do you see it yet?

It’s conservative. Not enough aggression. Whatever you want to call it, it caught up to them at the worst time. In a win or go home situation.

West Florida is a great team but there’s no way to justify what happened unless you look at how VSU’s offense, which was the best in the nation last year, didn’t put up the numbers everyone knows they can put up.

Nobody on that coaching staff wants to hear about last year, but honestly, why completely change an approach that won a national championship.

Wells was a Harlon Hill runner-up, he arguably got snubbed but he went on to win the natty. I know Wells could care less about the individual accolades, but he’s nowhere close to putting up the numbers he did last year.

His fault? Absolutely not.

It’s none of the players’ fault actually. They battled with the heart of a champion in that game and balled out all season.

But it’s hard not to think about what could’ve been if VSU was more aggressive with throwing the ball given the talent they have.

Even when they dropped back to pass, Wells is a proven play maker that makes the right decisions. He has no problem tucking the ball and running for a first down, he’s done it multiple times and even won a game with his ability to run.

‘Rogan Wheels’ is one of his nicknames donned by the media and we didn’t see any Wheels on Saturday.

Simply put. The players weren’t put in the best positions to win.

The offensive decisions have already been questioned, but I want to quickly touch on the defense.

They played well, but not well enough. The last scoring drive for West Florida saw the same player get five catches. Just five of his 14 catches of the night, Tate Lehtio carried West Florida to the end zone and to victory.

But the fact that Lehtio caught 14 passes for 140 yards and his longest reception was just 18 yards tells a lot more than you might think.

West Florida killed Valdosta with mid-range passes. They weren’t 20-plus yards deep but they weren’t throws to the flats for five yards or less.

They were consistent throws for about 10 or so yards. When I asked West Florida’s quarterback about his throwing decisions he had this to say:

“They were giving us a lot of two-man (coverage)” said West Florida quarterback Austin Reed. “We expected that coming into this game with the kind of route concepts we ran the first time. With that two-man, you got two deep safeties dropping with that man coverage underneath, we knew we weren’t going to get a lot of deep shots necessarily.”

In short, they knew what VSU did and the Blazers didn’t even mix it up.

That’s the definition of predictable.

The lack of mixing things up with aggressive play calls when you have the talent to do it.

That’s what killed the Blazers, and that’s what ended their season prematurely. This loss was inevitable due to their play style.

VSU narrowly lost the game, but it shouldn’t have been that close.

Left with a sour taste in their mouths, the Blazers have time to reflect and get ready for the upcoming season next year.

Joshua Miller is a special contributor with The Valdosta Daily Times.