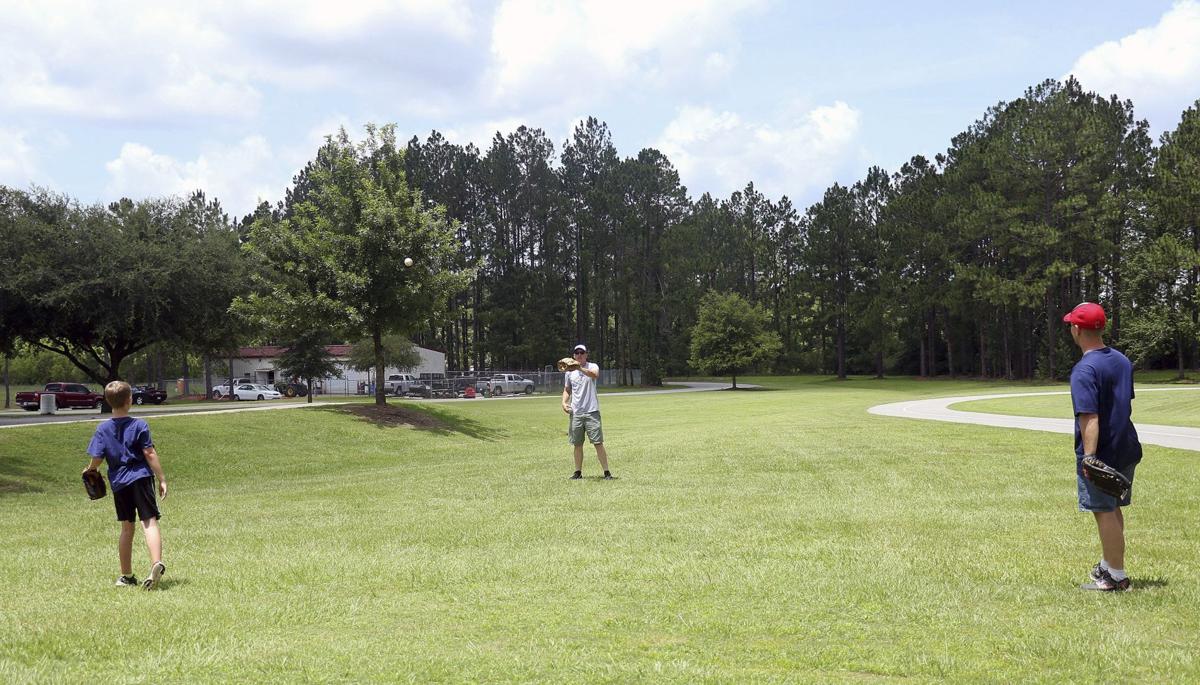 Derrick Davis | The Valdosta Daily TimesEthan Bryan, middle, tosses a baseball with Chris and Cameron Hetrick at Freedom Park on Saturday, Day 174 of his resolution to play catch every day in 2018. 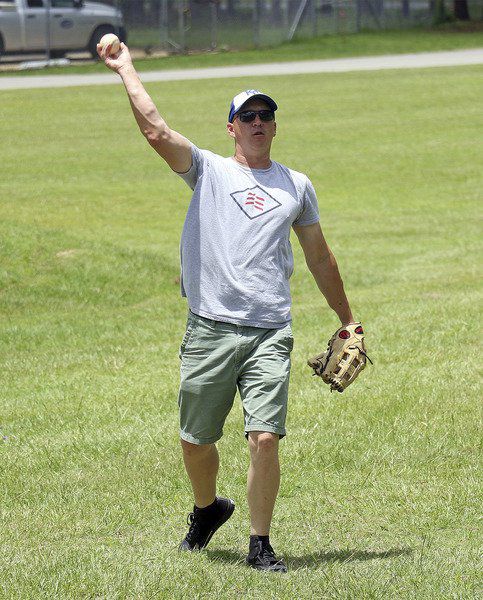 Derrick Davis | The Valdosta Daily TimesEthan Bryan tosses a baseball at Freedom Park on Saturday, Day 174 of his resolution to play catch every day in 2018. 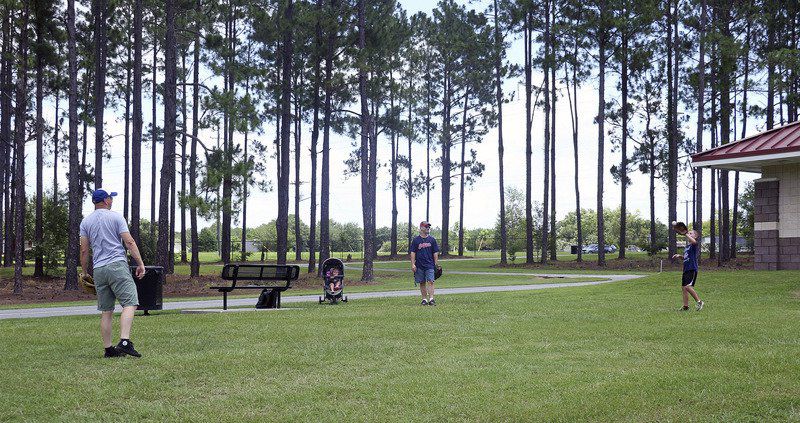 Derrick Davis | The Valdosta Daily TimesEthan Bryan, left, tosses a baseball with Chris and Cameron Hetrick at Freedom Park on Saturday, Day 174 of his resolution to play catch every day in 2018. 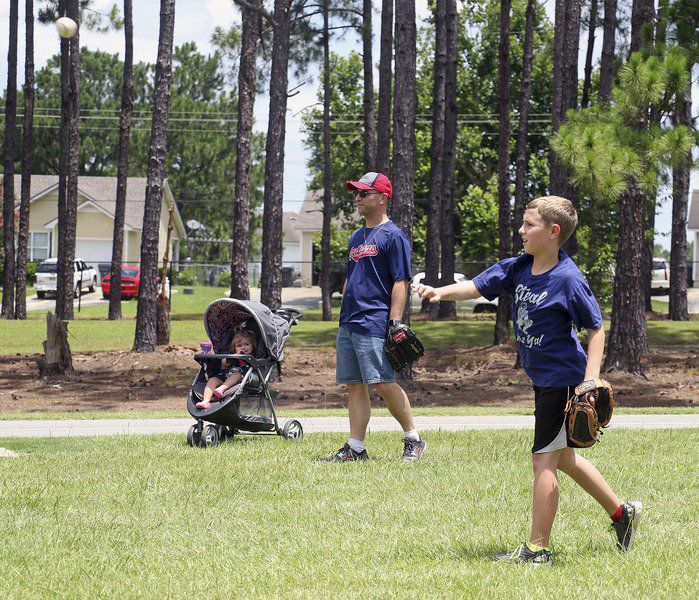 Derrick Davis | The Valdosta Daily TimesCameron Hetrick tosses a ball as his father Chris watches at Freedom Park on Saturday, Day 174 of Ethan Bryan's resolution to play catch every day in 2018. 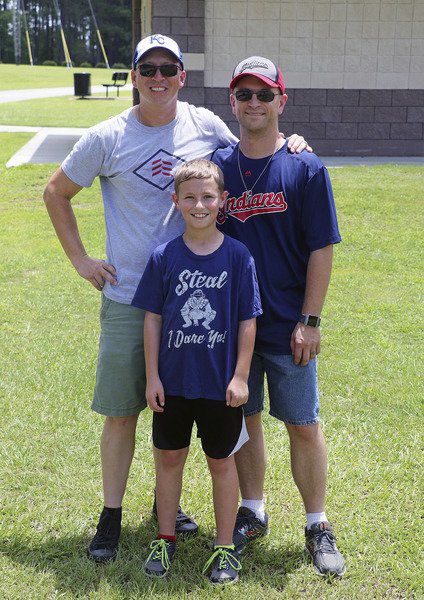 Derrick Davis | The Valdosta Daily TimesEthan Bryan poses for a photo with Chris and Cameron Hetrick after playing a game of catch at Freedom Park on Saturday, Day 174 of his resolution to play catch every day in 2018.

Derrick Davis | The Valdosta Daily TimesEthan Bryan, middle, tosses a baseball with Chris and Cameron Hetrick at Freedom Park on Saturday, Day 174 of his resolution to play catch every day in 2018.

Derrick Davis | The Valdosta Daily TimesEthan Bryan tosses a baseball at Freedom Park on Saturday, Day 174 of his resolution to play catch every day in 2018.

Derrick Davis | The Valdosta Daily TimesEthan Bryan, left, tosses a baseball with Chris and Cameron Hetrick at Freedom Park on Saturday, Day 174 of his resolution to play catch every day in 2018.

Derrick Davis | The Valdosta Daily TimesCameron Hetrick tosses a ball as his father Chris watches at Freedom Park on Saturday, Day 174 of Ethan Bryan's resolution to play catch every day in 2018.

Derrick Davis | The Valdosta Daily TimesEthan Bryan poses for a photo with Chris and Cameron Hetrick after playing a game of catch at Freedom Park on Saturday, Day 174 of his resolution to play catch every day in 2018.

VALDOSTA — One Day 1 of Ethan Bryan’s mission, he played a game of catch in 1 degree weather outside of his home in Springfield, Missouri.

Saturday, on Day 174 of Ethan’s journey, he found himself at Freedom Park, tossing a baseball with Chris Hetrick and his 11-year-old son Cameron in heat topping 90 degrees.

Ethan is an ordinary man with a wife, Jamie, and daughters, Kaylea, 17, and Sophie, 13, but lately, he’s achieved a level of notoriety as he’s embarked on a quest to play a game of catch every day in 2018.

“It has been the most grass roots, no organization taking place (idea),” Ethan said of his expedition’s humble beginnings. “My real resolution was to play golf with my dad once a month, and so for Christmas, my youngest daughter gave me a ball that said, ‘Wanna play catch?’ and on the very last day of 2017, we had been in the middle of Missouri, and a friend hit me fly balls to finish 2017, and it started to snow.

Ethan and Sophie bundled up and braved the cold at a park, where they tossed the baseball back and forth 30 times, a milestone they ruled was a good marker for a session, before taking a selfie to mark the occasion.

In retrospect, Sophie helped spur what would become her father’s year-long adventure, but it wasn’t exactly her motive at the time.

“I guess it started because I had no idea what to get him for Christmas,” Sophie said. “He has a million baseball hats, so I gave him a baseball and just wrote on it, ‘Wanna play catch?’

“He took it to mean I would play catch with him any desired moment, which wasn’t exactly how it was intended, but I kind of went with it I guess.”

While posting the photo of the morning catch to a blog that he originally kept to review his writing, Ethan noticed, about two weeks prior, he wrote a story about why everyone should play catch in 2018. A coincidence that caught his attention.

Later in afternoon, Ethan played catch with Kaylea in 4-degree weather and the two snapped another photo of their fogged glasses upon returning indoors.

After two days of playing catch with their father, Kaylea and Sophie asked Ethan if he would be playing catch with anyone for the third day of the year, and he responded, “Yeah, sure, I am,” ultimately tossing the ball with a friend that had come into town.

Soon after, Ethan’s resolution evolved. Thanks in part to a feature posted by MLB.com subsidiary Cut4, Ethan’s story spread, and he began receiving invitations, both domestic and foreign, to play catch from fans of his mantras: “baseball tells the best stories,” and “baseball brings people together.”

“I was always nervous that, ‘Why would anyone say yes?’” Ethan said. “Then when Cut4 wrote a story about it, I got invitations from all over the country.

“I’ve got invitations from the Netherlands, from Dominican Republic, from other other countries. I don’t even have a passport.”

Nevertheless, after filling the early stages of Ethan’s resolution playing catch with family members and church friends, he and his family set out on a tour through the Midwest at the beginning of the month, with stops in Missouri, Nebraska, North Dakota, Iowa, Michigan, and Illinois.

On his trek through the Midwest, Ethan got the opportunity to toss the ball around with the general manager of the minor league Omaha Storm Chasers, the founder of Baseball Seams Company in Sioux Falls, N.D., and original members of the All-American Girls Professional Baseball Team recounted in the movie, “A League of Their Own.”

Ethan’s quest to play catch has also connected him with a 4-year-old that’s already overcome three heart surgeries, and a cancer survivor trying to resurrect baseball in the small town of Wallenford, Iowa.

“Town of 180, this guy, Ryan, is a testicular cancer survivor, and he’s rebuilding the only ballpark in his town, so kids have a place to play,” Ethan said. “Kids from communities all around are coming to practice, so it was really cool. So, I played catch with him at his field.”

Once the 10-day tour of the Midwest was complete, Ethan felt it was time to go all-in on a trip to Florida, but only if he could find a way to bring the family along for the vacation. Jamie jokingly referred to the trip as the family’s “reward” for putting up with the quest.

On Father’s Day, Ethan played a game of catch in Springfield with a man celebrating his 50th birthday before hitting the road for what would be dubbed the “Tour of Play.”

En route to Orlando, the Bryans made “catch stops” at America’s oldest ballpark, Rickwood Field, in Birmingham, Ala., and the stadium in Daytona Beach, Fla., in which Jackie Robinson broke the color barrier by playing the first integrated game.

After a few days in Orlando, where Ethan played catch with Kaylea and Sophia to keep the streak intact, the Bryans made a lunch stop in Valdosta, giving Ethan the chance to toss the ball around with Chris and Cameron.

Chris, a helicopter mechanics at Moody Air Force Base, showed up to the session, organized by the Valdosta-Lowndes Parks and Recreation Association, sporting a Cleveland Indians shirt and flanked by Cameron as he pushed a stroller holding his daughter, who was also clad in Indians garb.

Following brief introductions, the real dialogue began as the three stood in a triangle, tossing a baseball back and forth. Among the topics of conversation, were Chris’ move from Ohio to Georgia upon joining the military, and both the Hetricks’ history with the VLPRA.

Cameron, a catcher and second baseman, revealed his favorite baseball player is Jose Altuve, a diminutive second baseman for the Houston Astros, because he is usually the smallest player on the field. Ethan confided in Cameron that he too was once the smallest player on his team, and urged him not to let it deter him from playing the game he loves.

“It was a great experience,” Chris said after competing the short session. “I’m always up for meeting new people. Part of the military is just being a part of something bigger than you, and you play a small part in that. This was kind of the same thing.

“It sounds like he’s got a cool project that he’s working on, and it’s a cool to be even just a tiny part of that.”

After tossing the ball with the Hetricks, Ethan sat on a bench and reflected on some of the knowledge he’s accrued more than halfway through his resolution, including the opportunity playing catch affords one to learn about their throwing partner.

“What he’s thinking is, ‘While he’s busy thinking about baseball, I can figure out how his day was, and how things are at school, and how everything is in his life.’ It became the metaphor of our relationship. This is how we checked in. I was dreaming baseball dreams, he’s making sure his boy’s doing ok.”

Chris glanced over at Cameron and nodded his head in agreement.

As Ethan spoke about the next stop on his journey, a pass through Arkansas on Sunday to play catch with his sister for the first time, he too turned his attention to Cameron, and nodded at the stroller as he implored the older brother to include his own sister when he gets the chance.

After Ethan parted ways with the Hetricks, and he as prepared to rejoin his family in piling up mileage in a white van, his wife imparted some of the life lessons the family has learned through 174 days of the Catch 365 Tour of Hope.

“It’s amazing,” Jamie said. “Baseball does truly give you something to connect over. It gives you something to get to know new people, and to reconnect with friends you haven’t seen in a while, and for me, that’s the big part: just kind of that fellowship.”

Derrick Davis is the sports editor at the Valdosta Daily Times.