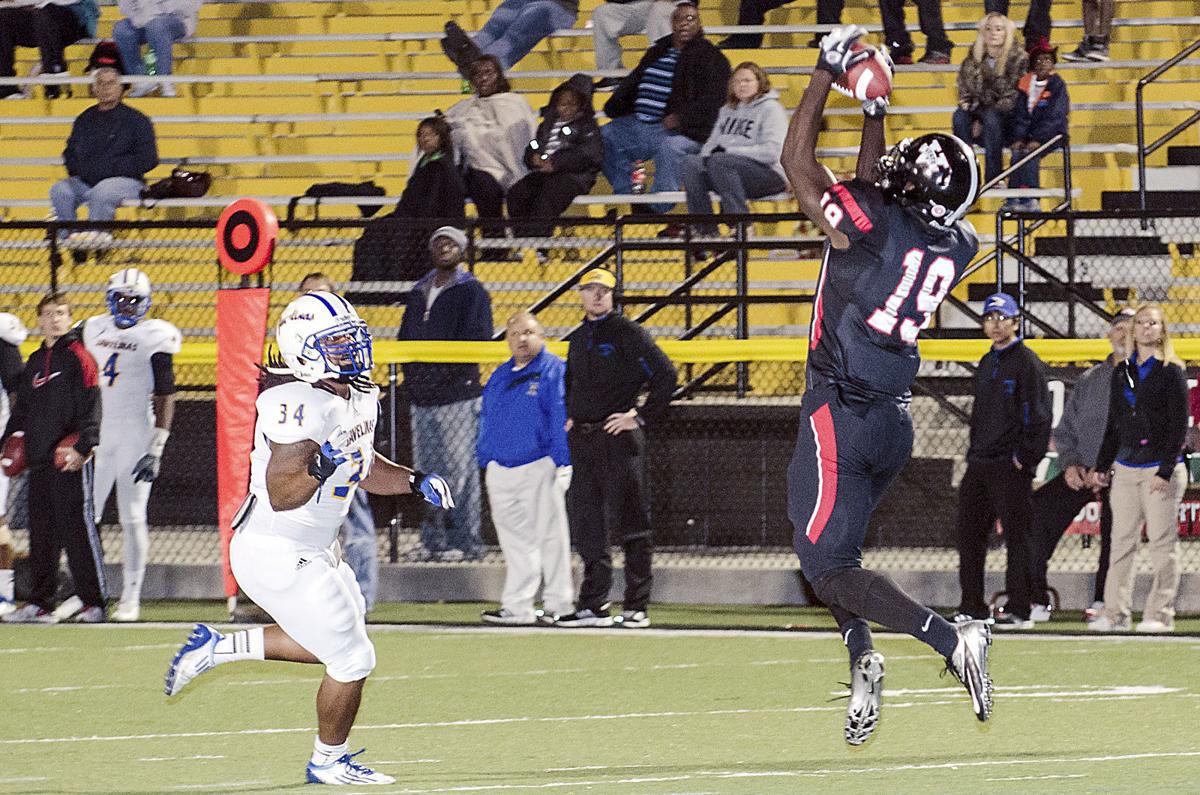 Valdosta State wide receiver Gerald Ford (19) makes a catch deep in Javelinas territory on Thursday night. Ford caught the ball, then ran into the end zone for the Blazers’ second touchdown of the game. 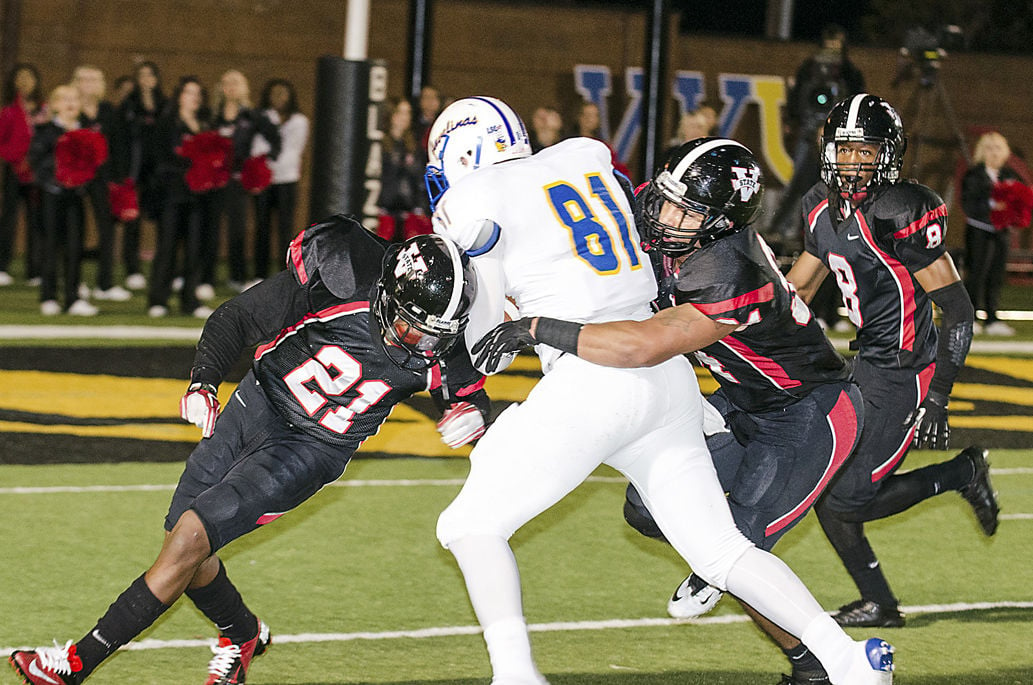 Valdosta State wide receiver Gerald Ford (19) makes a catch deep in Javelinas territory on Thursday night. Ford caught the ball, then ran into the end zone for the Blazers’ second touchdown of the game.

The Valdosta State football team is heading back to the playoffs.

“That was a heck of a football game,” Valdosta State head coach David Dean said. “That is a really good football team. I am just proud of our guys for finding a way to win that football game.”

In a back-and-forth game that featured three lead changes and three ties, the Blazers used a 9-yard touchdown run by freshman running back Cedric O’Neal with 37 seconds remaining to secure the win and their playoff future.

O’Neal’s touchdown capped off a dominating series of plays for the Blazers, which ultimately made the difference Thursday night.

A sack and a fumble force by Tyler Josey on a fourth-down-and-one for Kingsville set up the game-winning touchdown drive for Valdosta State. Josey sacked Kingsville quarterback Bryan Ehrlich, knocking the ball onto the ground and into the arms of linebacker Chris Pope.

The play by Josey ended what looked like a potential game-winning drive for the high-powered and nearly unstoppable Javelinas offense.

“We had an inside blitz where the defensive ends have outside contain,” said Josey, who tied a school-record with four sacks on the night. “They had been giving it to the running back the whole night when we had seen that tackle pull, and they knew they were going to keep it with the quarterback. As soon as he kept it, I made the tackle on the edge.”

“Tyler Josey played the game of his life tonight. That was a big time play. Who would ever thought they would run a naked boot?,” Dean said. “I thought it was a great call by their staff. If they get out there, they are going to make things happen. But, Tyler beat his guy and forced the fumble.”

Josey’s fumble recovery gave the Blazers possession of the ball at their own 43 with 3:35 remaining. The Blazers then used five runs by O’Neal and a pass from quarterback Cayden Cochran to Quin Roberson to move down the field and score the game-winning touchdown.

“When we walked off the field following the West Alabama game, we didn’t feel like we played our best football game,” Dean said. “’We said we gotta win six in a row to get where we want to be and to those kids’ credit in that locker room, that is exactly what they did — they won six in a row.”

The Blazers were able to earn their sixth straight win, despite being outgained 495-473 by the Javelinas.

Valdosta State quarterback Cayden Cochran threw four touchdown passes on the night, along with two interceptions. He now has 19 TD passes on the season, the most by a Blazer quarterback since Chris Hart in 2008.

Receiver Gerald Ford hauled in two touchdown passes on the night, giving him 12 of the season, the seventh most in a single season at VSU.

“I am just happy we could come out here and get a win on senior night,” Ford said. “I give it all to God. … I am just happy. I don’t try to make it all about me. I just try to catch the ball and run.”

A large chunk of Kingsville’s offensive production came through the air, as the Javelinas’ quarterbacks torched the Blazer defense for 389 yards. Backup quarterback Bryan Ehrlich, who entered the game in the second quarter, finished the night 12 of 24 for 224 yards with a pair of touchdowns.

Ehrlich, a fifth-year senior transfer from Newberry, was intercepted once by VSU linebacker Chris Pope, giving him 9-career INTs in three games against the Blazers.

Ehrlich and starter Nate Poppel targeted Robert Armstrong much of the night; Armstrong finished with 4 catches for 137 yards and a pair of touchdowns, including a 94-yard scoring reception on the Javelinas’ first offensive play of the night.

The lead didn’t last long, though. Just four offensive plays into VSU’s ensuing drive, Cochran found Seantavious Jones down the left sideline for a 57-yard touchdown pass. On the play, Jones grabbed the ball out of the defender’s hands to make the catch and run away from the defenders.

“They are a resilient crew,” Dean said. “We’ve had that happen to us before. We’ve given up big drives on opening drives; we’ve been hit for a big play on the first play. We realize it is a 60-minute game and we are going to keep fighting and that is what we did.”

Valdosta State took its first lead of the game on its following possession when Cochran connected with Regginald Lewis (9 catches for 107 yards on the night) on a 44-yard touchdown pass. Lewis caught the ball in the flats on the left side and broke through Kingsville defenders to break loose for the touchdown.

On Kingsville’s ensuing possession, Ehrlich led the Javelinas down the field for a game-tying touchdown, capping off the drive on a 1-yard quarterback sneak.

The Blazers regained the lead later in the second quarter when Cochran connected with Ford on a 44-yard touchdown pass across the middle, which made the score 21-14.

Kingsville added a field goal with less than a minute remaining in the second quarter, cutting VSU’s first half lead to 21-17.

The Javelinas regained the lead in the third quarter, using a 9-play, 55-yard touchdown drive capped off by an 18-yard pass from Ehrlich to Armstrong, his second touchdown catch of the night.

The Blazers tied the game at 24-24 behind a methodical 17-play, 79-yard drive that took over 6 1/2 minutes off the clock, capped off by a 22-yard field by Daniel Andersen.

After a Kingsville punt, the Blazers retook the lead with an 8-play drive capped off by a 4-yard touchdown pass from Cochran to Ford, the duos second of the night and Ford’s 12th of the season, which moved him up in the VSU single season record books. The score gave the Blazers a 31-24 lead.

But, like they had done all night, the Javelinas came charging back.

VSU regained possession of the ball, looking for a game-winning touchdown, with 7:30 remaining. The drive was cut short when Kingsville’s Ronnie Ford intercepted Cochran’s pass to cut the drive short, setting up the Javelinas’ potential game-winning drive that ended with Josey’s sack and fumble.

The South Region 2 playoff bracket won’t be released until Sunday, Nov. 11. With the win, VSU is nearly guaranteed a home playoff game. The playoffs begin Nov. 17.