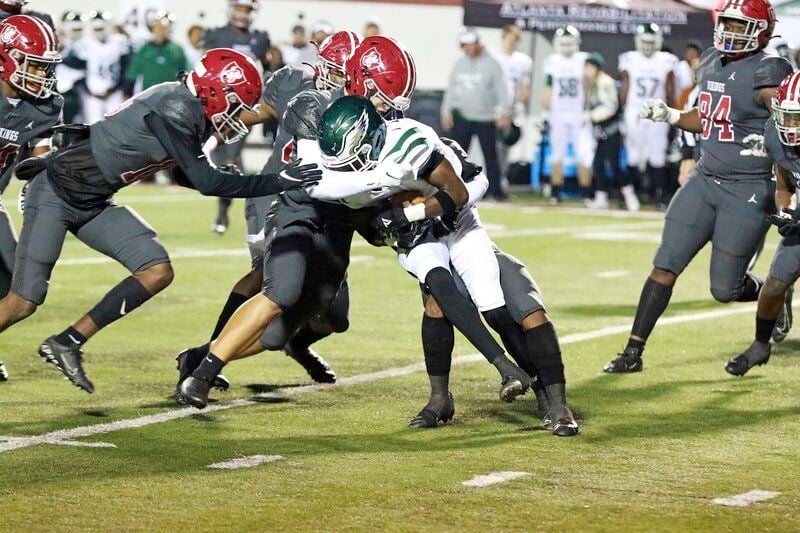 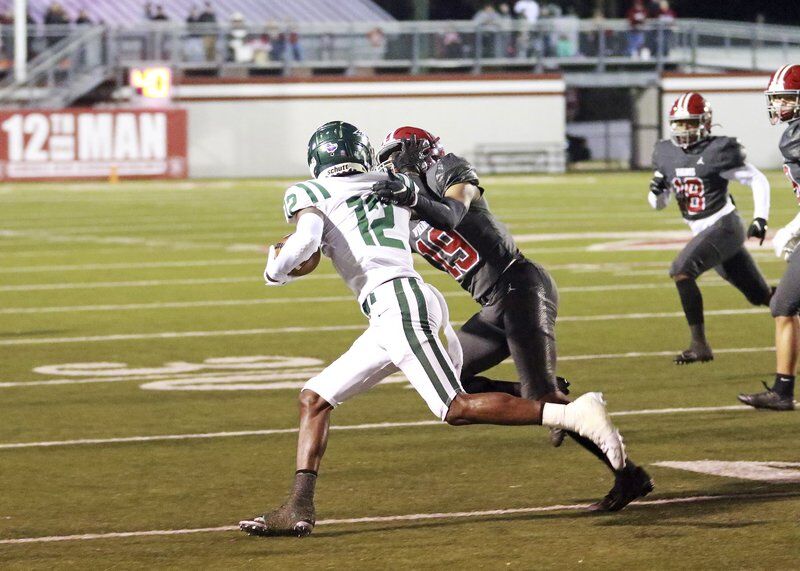 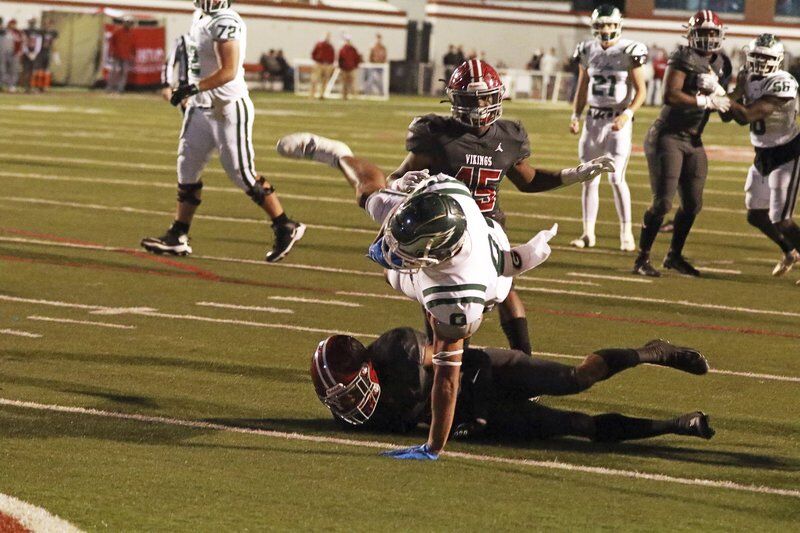 Shane Thomas | The Valdosta Daily TimesCollins Hill wide receiver Ethan Davis (9) puts his hand down to break his fall into the end zone for a touchdown in the first quarter of a Class AAAAAAA quarterfinal game against Lowndes Friday at Martin Stadium.

Shane Thomas | The Valdosta Daily TimesCollins Hill wide receiver Ethan Davis (9) puts his hand down to break his fall into the end zone for a touchdown in the first quarter of a Class AAAAAAA quarterfinal game against Lowndes Friday at Martin Stadium.

VALDOSTA – For the second straight year, the Lowndes Vikings' season ended at the hands of the Collins Hill Eagles.

With senior quarterback Jacurri Brown unable to run the ball and senior running back Chase Belcher out entirely for the Vikings, they just weren’t able to keep up with Sam Horn and the Eagles' firepower in a 49-7 loss Friday night.

Led by Horn and wide receiver/defensive back Travis Hunter, the Eagles jumped out to a 28-7 lead by halftime – the largest deficit going into halftime the Vikings have faced this season.

And it would only get worse in the second half as the Vikings weren’t able to score again.

Horn, the Eagles' star quarterback, picked apart the Vikings' secondary, going 28 for 33 for 320 yards and four touchdowns. The Missouri commit didn’t throw the ball in the fourth quarter.

Travis Hunter, the No. 1 recruit in the nation according to rivals.com, finished with nine catches for 109 yards and two touchdowns, as well as the only interception for the Eagles.

However, the leading receiver for the Eagles Friday was sophomore Cedric Nash with seven catches for 113 yards.

The majority of those yards came after the catch for Nash, who found holes underneath the Vikings' secondary all night while taking advantage of the off-man coverage.

Vikings head coach Jamey DuBose detailed how Nash and the Eagles were able to have so much success in the passing game.

“Most of it was quick throws and that’s who they are. Their run game is throwing quick screens and getting the ball on the edge. We knew that coming in,” DuBose said. “We didn’t tackle well early. We gave them too much space on some quick routes that they just caught, and yards after catch and yards after contact were huge.”

The Vikings' defense understandably also struggled to bring down Ethan Davis. The 6-foot-6 pass catcher finished with the other two touchdowns from Horn, as well as adding 86 yards on nine receptions.

DuBose mentioned the Eagles' run game, or lack thereof against the Vikings. The Eagles finished with 239 rushing yards, but most of that came in the second half when the Vikings were down multiple scores.

They hardly ran the ball in the first half, but one rush, an 80-yard breakaway score from Ryan Stephens, felt like a turning point in the game.

Moments before, a DeAunte Hunter interception set the Vikings up at the 15 with a chance to close the gap from 20-7 a couple of minutes before halftime. But the Vikings' offense went nowhere, and a 30-yard field goal by Franklin Aguilar went wide left to leave the Vikings empty-handed with 30 seconds left.

The Eagles took over from the 20-yard line and handed the ball to Stephens on the first play. To this point, the Eagles' leading rusher had run the ball three times for a total of five yards.

But on this play, DuBose said there was confusion getting the call in to the defense. In the scramble, Stephens broke up the middle for 80 yards to the house, and instead of going into halftime 20-10 or 20-14, the Vikings went in down 28-7.

Being unable to turn a 15-yard field into any points right before half was the highlight of the Vikings' offensive struggles against the Eagles.

The Eagles have had a dominant defense all season, but the injuries to the Vikings' offense certainly hampered production Friday night.

When they have been successful on offense, the Vikings have been able to run the ball, as evidenced by their 2,300 yards rushing as a team on the season. But Friday, they were missing nearly 1,600 of those yards with Brown and Belcher hobbled or, in Belcher's case, sidelined entirely.

DuBose said the offense that was on the field tonight was not the same unit that had averaged 40 points per game over their last six games.

“Tonight was no indication of what the year was like, and that’s what I hate about it because if we had been full speed – I’m not saying we would’ve won the game, but I think it would’ve been a very different look," DuBose said. “Both those guys [Brown and Belcher] are why we’re here. But last week took its toll on us, the year took its toll on us and we just couldn’t go any further.”

In their absence, sophomore running back Jacarre' "Smoke" Fleming was good, but his 66 yards weren’t close to enough to make up for all that missing production.

With Brown’s injured ankle forcing him to be a pocket passer, he struggled – going 5 for 11 for 54 yards. While Brown is usually at his best evading pressure and making plays on the move, the big defensive line for the Eagles stayed in his face and made things difficult for him all game.

“They did a good job against us, and we didn’t control the line of scrimmage on either side," DuBose said. "I felt like they won both sides of it."

It didn’t help that, without Belcher, the Vikings were also down their second leading receiver, giving Brown even fewer options to get the ball out quickly.

However, DuBose doesn’t want this game to define the season for the Vikings, who exceeded expectations in many people’s minds.

“If you ask people back in July, people we’re saying 5-5, 6-4. We end up 8-2, region champs and sitting in the quarterfinals,” DuBose said. “I’m proud of our team and I’m proud of our coaches. I hate that it ended the way that it did. We’ll get in the offseason now, we’ll get bigger, faster, stronger and try to get back here next year.”