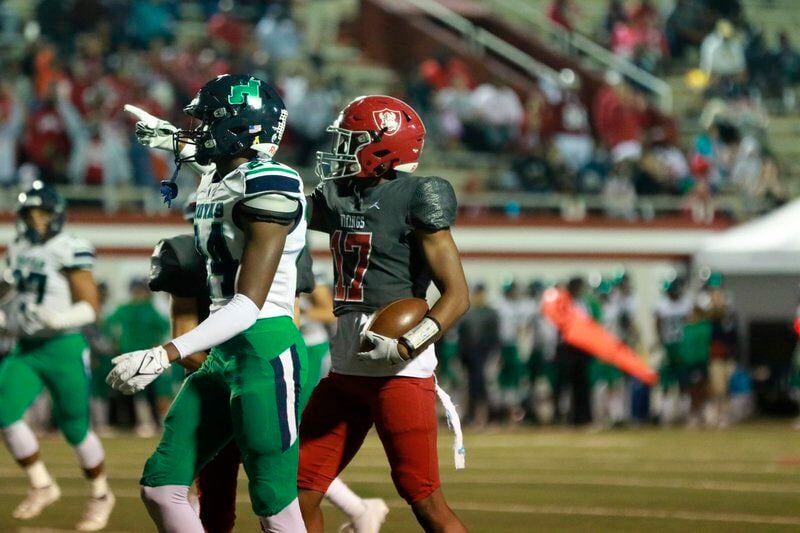 Shane Thomas | The Valdosta Daily TimesLowndes wide receiver Khris Thomas (17) points downfield after making a catch for a first down during a Class 7A state playoff game against Harrison Friday at Martin Stadium. Thomas caught four passes for 107 yards in Lowndes’ 45-35 win. 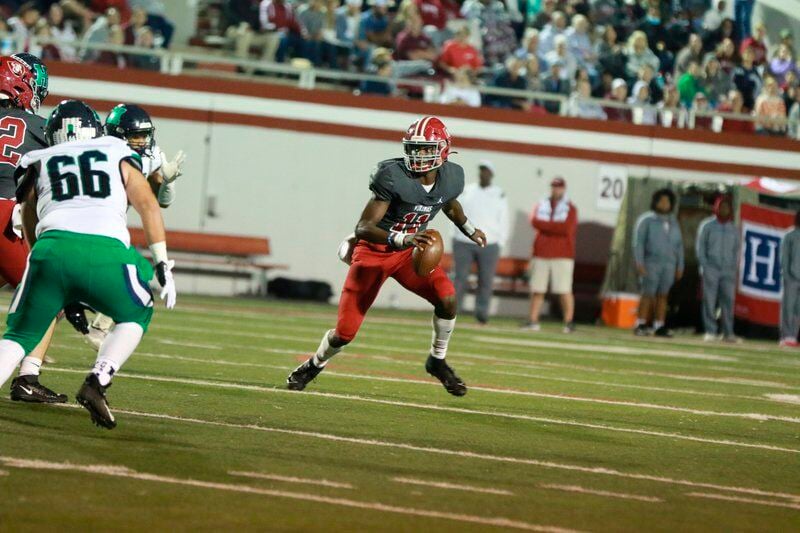 Shane Thomas | The Valdosta Daily TimesLowndes quarterback Jacurri Brown (11) scrambles during a Class 7A state playoff game against Harrison Friday at Martin Stadium. Brown completed 12 of 20 passes for 225 yards with one touchdown in the Vikings’ 45-35 win. 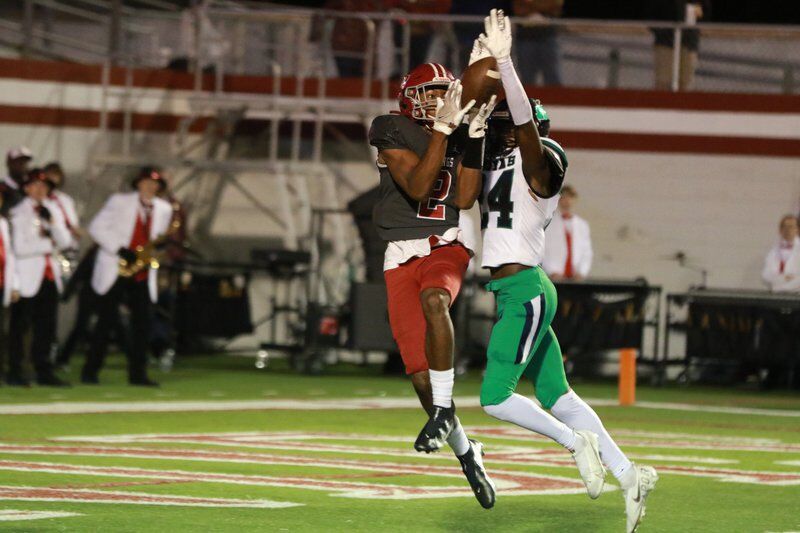 Shane Thomas | The Valdosta Daily TimesLowndes wide receiver Justin Barron (2) goes up for a ball against Harrison defensive back Timothy Sturdivant (24) during a Class 7A state playoff game against Harrison Friday at Martin Stadium. The pass fell incomplete in the end zone.

Shane Thomas | The Valdosta Daily TimesLowndes wide receiver Khris Thomas (17) points downfield after making a catch for a first down during a Class 7A state playoff game against Harrison Friday at Martin Stadium. Thomas caught four passes for 107 yards in Lowndes’ 45-35 win.

Shane Thomas | The Valdosta Daily TimesLowndes quarterback Jacurri Brown (11) scrambles during a Class 7A state playoff game against Harrison Friday at Martin Stadium. Brown completed 12 of 20 passes for 225 yards with one touchdown in the Vikings’ 45-35 win.

Shane Thomas | The Valdosta Daily TimesLowndes wide receiver Justin Barron (2) goes up for a ball against Harrison defensive back Timothy Sturdivant (24) during a Class 7A state playoff game against Harrison Friday at Martin Stadium. The pass fell incomplete in the end zone.

VALDOSTA – The Lowndes Vikings welcomed the Harrison Hoyas to the 2021 GHSA playoffs in the Concrete Palace by scoring 22 points in the first 6 minutes of a 45-35 home win Friday night.

While the Hoyas were able to outgain and outscore the Vikings in the second half, the 22-0 first-quarter deficit and 28-0 hole early in the second quarter proved to be too much for the Hoyas.

The first half was all Vikings. Even the 35-14 score at halftime doesn’t quite do it justice. The Hoyas only made it across midfield once and ended the half with 137 total yards of offense.

However, the same can’t be said for the second half of the contest where the Hoyas came back to make it a two-touchdown game late in the third.

“We just didn’t play a four-quarter game. I think, in the second half, we really played lackadaisical, not enough enthusiasm,” said Vikings head coach Jamey DuBose.

The second-year coach, who’s in the midst of a seven-game winning streak, had flashbacks to a game earlier this season where the Vikings almost watched another 28-point first-half lead dissipate.

“Tonight reminded me a lot of the Griffin game, where we went into the half with a 35-7 game and came out and we had to hold on at the end to win,” DuBose said. “Heck it was 28-0 at one point. It looked like it was going to be a cruise tonight, but it ended up not being that. We get to looking at the scoreboard, but we need to keep playing.”

In the second half Friday night, the Hoyas more than doubled their first-half production, scorching the Vikings for nearly 300 yards. The Hoyas finished with 430 total yards, one less than the Vikings’ 431.

The Hoyas and Vikings finished statistically similar in most important categories except one: turnovers.

The Hoyas had four turnovers turn into 14 Vikings points, where the Vikings only turned it over once, a fumble recovered for a touchdown in the waning seconds of the first half.

Those 14 points for the Vikings all came in the first quarter, when the Hoyas looked like a deer caught in headlights.

“I thought we got off the bus and played really well,” DuBose said.  “We went down the field and got in the end zone quick. Then came back the other way and got a pick six.”

At that point, the Vikings were up 14-0 after running only four offensive plays thanks to senior defensive back Josh Pickett.

Pickett has been one of the leading tacklers for the Vikings this season and he showed up big for the defense Friday night, recording 11 tackles, and the only defensive touchdown the Vikings have scored all season.

Hoyas quarterback Jake Walling was under pressure for much of the first half, and especially so in the first quarter. One of the results of that pressure was a wobbly pass that floated in the air for Pickett to pick it, but that wasn’t all he did. The senior took Walling’s pass 50 yards the other way for six.

On the ensuing drive for the Hoyas, Walling just overthrew his receiver, but unfortunately for him C.J. Tomlin separated from behind Walling’s target and dove to intercept the ball.

Four plays later, the Vikings scored again to make it 22-0 while the stadium was still filling up.

On that four-play drive, sophomore running back Jacarre Fleming took the Vikings halfway there with a 25-yard burst up the middle on his first touch of the game. His second touch of the game also went for 20 yards but that was called back for holding.

While penalties have been a problem for the Vikings this season, and they had another 105 penalty yards Friday night, this holding call wouldn’t matter, except to Fleming’s stats. The sophomore still finished with 71 total yards on only six carries and one catch.

A couple of plays later, Jacurri Brown threw up a jump ball that Justin Baron rose over his defender to haul in at the two-yard line. From there, he shrugged off the defender and walked across the plane for a 38-yard touchdown catch.

Barron caught the only passing touchdown and finished with 43 receiving yards. Khris Thomas led the way in that category for the Vikings with four catches for 107 yards. Brown threw for 225 yards.

The Vikings scored again early in the second quarter, but instead of starting the drive almost at midfield, this one started inside the 5-yard line. After the Vikings spent the first two downs going the wrong way, they faced 98 yards between them and pay dirt.

Seven plays later, senior Chase Belcher was carrying defenders with him into the end zone to make it 28-0 with nine minutes remaining in the first half.

Belcher again did a bit of everything for the Vikings, leading the team with 92 yards on the ground and three touchdowns, on top of 34 receiving yards on a pair of 17-yard catches.

The Hoyas used a short field late in the second quarter to score their first points of the game.  They had a short field because, despite being up by 28 points with about 3 minutes left in the half, the Vikings went for a fourth and eight around midfield unsuccessful.

The Hoyas then went about 60 yards in four plays, aided by a 15-yard penalty on the Vikings for a late hit that set the Hoyas up for a first and goal from the 7. Which they capitalized on on the next play to make it 28-7.

The Vikings responded by capitalizing on their own short field after a botched kickoff set the Vikings up at midfield.

The Vikings left about a minute and a half on the clock after Brown rushed for his only touchdown on the day. Up 35-7, it would’ve been perfectly reasonable to look forward to halftime, but when the Hoyas fumbled the kick back to the Vikings, an opportunity presented itself.

Brown scrambled around, trying to make something happen but nobody would come open downfield. At least nobody in Brown’s line of sight as he juked around multiple Hoya defenders.

The Hoyas got the last laugh as the ball came out of Brown’s hand and Ryan Nelson scooped it up and went 65 yards to bring the score to 35-14 right before the half.

That play seems like a turning point looking back, as the Hoyas came out after halftime looking like a new team.

Indeed, the Hoyas were the team of the second half, but the Vikings held on and won the game by being the team of the first half this time. But a win is a win at the end of the night no matter how pretty it is.

“Defensively we’re giving up way too many points; too many yards,” DuBose said. “All I can say is I’m proud we came out and to a great first half and put points on the boards, which enabled us to find a way to win. But we got to do a better job and we’ll do that next week.”