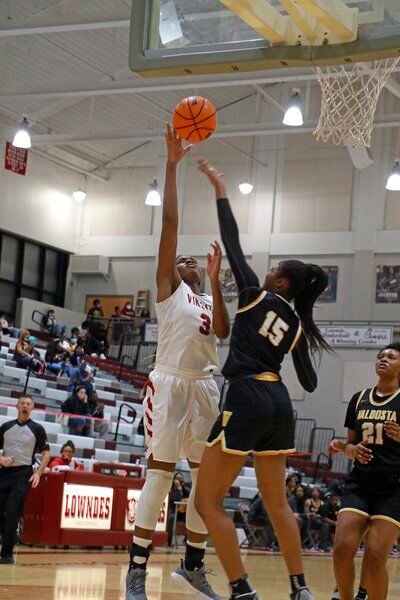 Shane Thomas | The Valdosta Daily TimesLowndes guard Otaifo Esenabhalu (3) goes up for a layup while being contested by Valdosta center Delissa Kier (15) during a game Thursday at Lowndes High School. 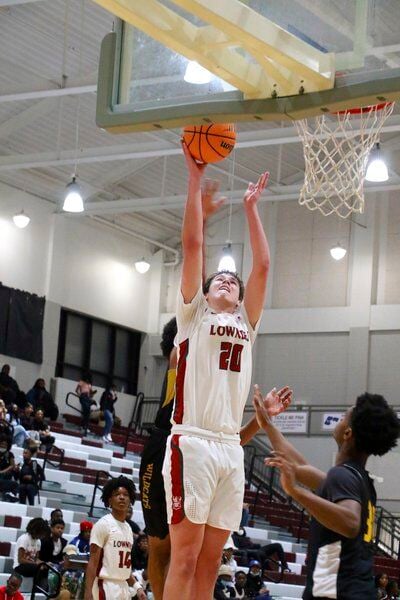 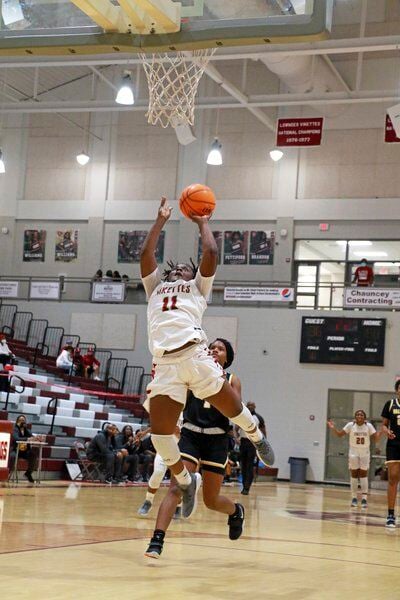 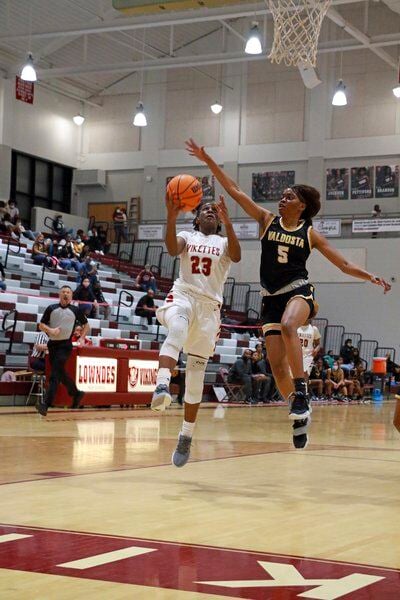 Shane Thomas | The Valdosta Daily TimesLowndes guard Taje Middleton (23) goes up for a layup while being contested by Valdosta guard Gavonia Horton (5) during a game Thursday at Lowndes High School. 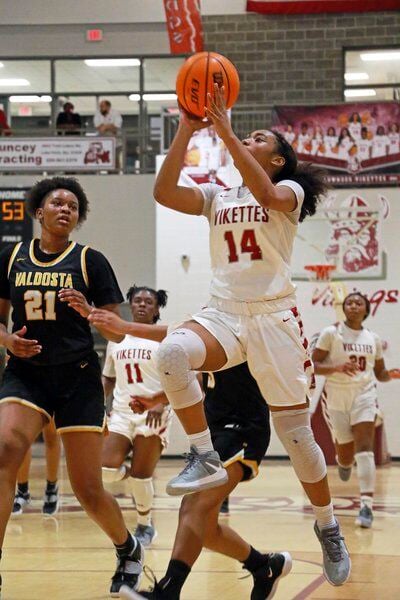 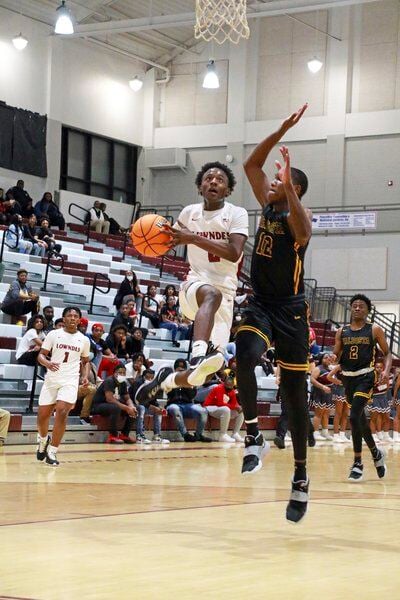 Shane Thomas | The Valdosta Daily TimesLowndes guard Jacques Williams (2) goes up for a layup against Valdosta's Kylan Fox (12) during a game Thursday at Lowndes High School. Williams scored 11 points in the Vikings' 47-44 loss to the Wildcats. 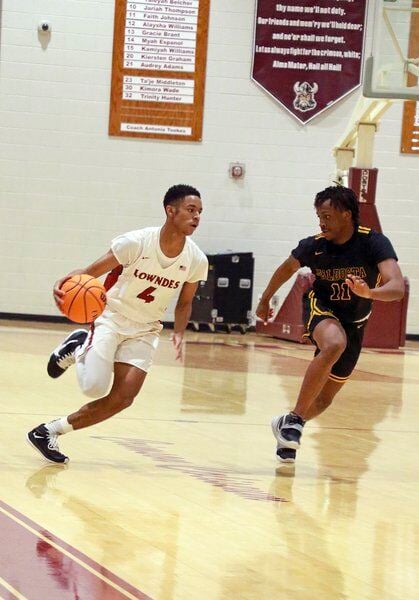 Shane Thomas | The Valdosta Daily TimesLowndes guard Otaifo Esenabhalu (3) goes up for a layup while being contested by Valdosta center Delissa Kier (15) during a game Thursday at Lowndes High School.

Shane Thomas | The Valdosta Daily TimesLowndes guard Taje Middleton (23) goes up for a layup while being contested by Valdosta guard Gavonia Horton (5) during a game Thursday at Lowndes High School.

Shane Thomas | The Valdosta Daily TimesLowndes guard Jacques Williams (2) goes up for a layup against Valdosta's Kylan Fox (12) during a game Thursday at Lowndes High School. Williams scored 11 points in the Vikings' 47-44 loss to the Wildcats.

VALDOSTA –– The Lowndes Vikettes basketball team completed a season sweep against Valdosta after beating the Wildcats 61-38 on Thursday.

In a game where the Wildcats appeared to run out of gas late, the Vikettes came together for their best performance yet. They dispatched the crosstown rivals after a 20-point performance from Faith Johnson.

Johnson put on a clinic in the third quarter, scoring floaters, contested layups and jump shots herself but also by making key passes to teammates for scoring opportunities.

The result of the offensive outburst was the Vikettes’ offense looking as fluid as it has all season. Taje Middleton had 12 points, Otaifo Esenabhalu and Amayah Espanol both finished with nine points and four other players contributed points.

The highlight of the game came on a fast break after a Wildcat turnover in the fourth quarter. Espanol was ahead of every other player and had an uncontested layup.

She rose up appearing to wildly miss the shot but instead lobbed the ball off the backboard to Johnson who was trailing behind her.

Johnson caught the ball in midair and made a lay-up, provoking a roar from the fans in attendance.

The team appeared to have genuine fun on the court and as the final buzzer sounded, the Vikettes celebrated the final win of the regular season.

“They’re finally gelling at the right time,” head coach Antonia Tookes said about the 23 point win. “I told them they should be having fun while playing basketball. But it starts with talking. It starts with defense so you can get easy layups and then that’s fun.”

With the win the Vikettes will now shift their attention to Tookes’ alma mater Camden County and the region tournament.

“We’ve got to play Camden, I’m a graduate of Camden, they have no quit in them,” Tookes said about the region tournament. “We have to match their intensity when they come in because they’re not just going to give it to us. Right now we’re gelling, we’re having fun and the sky is the limit.”

The Vikettes will be the No. 3 seed in the region tournament and will face Camden on Saturday.

The Lowndes boys dropped a home contest against Valdosta 47-44 after a late three pointer by the Wildcats.

What appeared to be a runaway contest by the Wildcats turned into a close contest with less than a minute to go.

Valdosta got an open look to take the lead from the corner in front of their bench and knocked it down, making it a three-point contest.

With the seconds running down, the Vikings pushed down the court and attempted a game-tying shot but it didn’t stay down and Lowndes suffered a home loss in the final regular season game.

The shot at the end is what will be remembered, but there was a stretch in the third quarter that put the Wildcats in a good position.

With a little more than three minutes remaining in the quarter Lowndes tied the game at 33. What followed from the Vikings was a stretch where they committed two turnovers and two fouls that allowed Valdosta to take a seven-point lead into the fourth.

The gap meant the junior varsity players would be forced to overcome a seven point deficit if they wanted to win the contest.

In a high-energy and high-emotion game, it was the slight advantage that pushed the Wildcats past the finish line.

Lowndes will face Colquitt in the region tournament on Saturday. It’s the third time the two teams will meet with Lowndes winning the two prior matchups.

Despite consecutive losses to close out the regular season, Lowndes is steadfast on the mission to win a region championship according to Benjamin.

“I think we figured something out tonight that we’ll take into Saturday and as we go forward,” Benjamin said. “The main thing, mental toughness down the stretch, making free throws, staying in front of your man instead of bail out fouling and if a shot goes up, securing those game winning type rebounds. That’s the key. If we just take the energy and momentum that we played with tonight into Saturday, I like our chances.