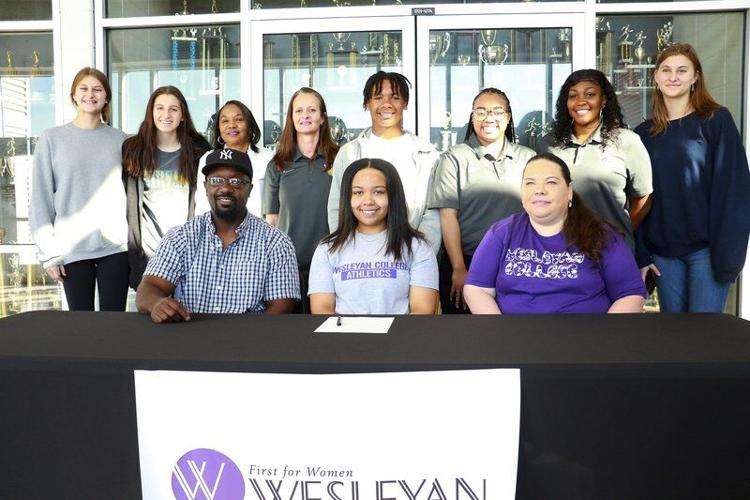 Shane Thomas | The Valdosta Daily TimesValdosta High setter Alivia Fennell, center, sits with her parents Aaron and Leslie along with members of the VHS volleyball team and coaching staff after signing with Wesleyan College on Wednesday. 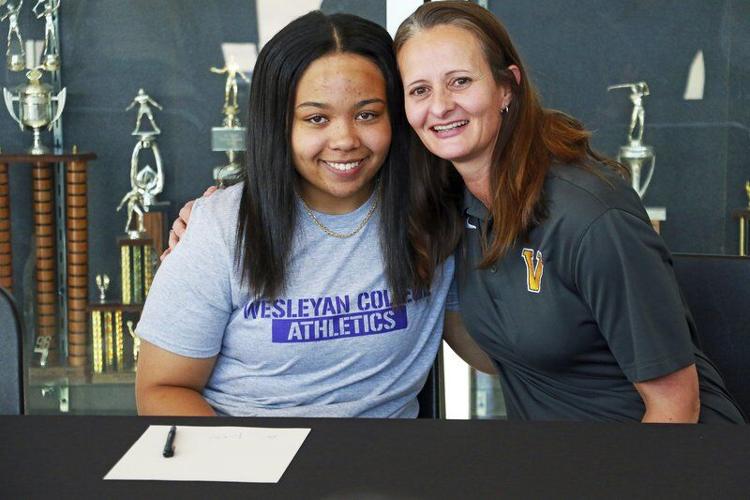 Shane Thomas | The Valdosta Daily TimesValdosta High setter Alivia Fennell, center, sits with her parents Aaron and Leslie along with members of the VHS volleyball team and coaching staff after signing with Wesleyan College on Wednesday.

VALDOSTA – When it comes to Valdosta High School volleyball, setter Alivia Fennell is one of the greatest of all-time.

"It means a lot. I didn't think I would get this far," Fennell said of signing with Wesleyan. "I was worried about not being good enough to be a college athlete. It's a great accomplishment and a door to the next step in my journey."

Fennell helped lead the 'Cats to a 23-16 record this past season and an appearance in the second round of the state playoffs for the first time in school history.

This past season, Fennell not only became the first Wildcat to reach 1,000 career assists, she pushed that mark to 1,242 by season's end. Fennell was named Most Valuable Player and a First Team All-Region selection.

In 2019-20, she was voted the team's Best Defensive Player and made the All-Region Second Team.

"I have a poster (in the gym), so of course I'm going to come back to see it and show the younger girls that if you work hard, you can succeed. You can get a poster in the gym. You can win awards. You can get the chance to go to college for volleyball and do what you love."

Off the court, Fennell plans to major in biology and aspires to work in chiropractic medicine after her volleyball career is over.

On the court, Fennell will be looked to as a foundational piece to help the Wolves turn their program around under head coach Malaeolevavau Fiaseu. The Wolves finished just 2-21 last season and lost their last six matches in a row.

According to Fennell, Fiaseu sees her as a welcomed addition to their lineup for next season.

"It's a big responsibility; everybody depending on you, but doing it for seven years at the same position, I'm used to the pressure," Fennell said. "They told me I'll fit in very well. Coach (Fiaseu) told me one of the players saw me playing and said they would enjoy me being there. I can't wait to experience the environment because I've heard the environment is really good and playing with them."

McCall was inducted into the Valdosta State University Athletic Hall of Fame in 2019, having recorded over 3,000 assists for the Blazers – a program record for a career at the time. McCall holds the distinction of being the first volleyball player to be inducted to the VSU Athletic Hall of Fame.

McCall opened Wednesday's ceremony with a story about Fennell's start with the VHS volleyball program.

"I was thinking about it last night," McCall said. "The first time I met Alivia, it was probably about middle school – seventh grade. You could tell right away that she had played before. I didn't see her much at the middle school level, but when she came to the high school, she played on our JV team the first year and I just remember the summer before her sophomore year, having some conversations with Alivia about her having to work harder or she was not going to play at the varsity level.

"We butted heads a little bit, but she definitely improved herself. She was one of two setters her sophomore year and then she was the starting setter her junior and senior year. ... Now's she's signing to go to college. That's a big honor. We're extremely proud of her and very excited about this occasion."

Fennell will graduate from VHS on May 27.

After putting pen to paper on where she'll spend her college years, Fennell reflected on what playing for the Wildcats and being a student-athlete means to her.

"Being a Wildcat has meant so much," Fennell said. "They got me to college off their sports and doing well and playing well and giving me the opportunity to play the sport I love. I'll miss the people, the coaches, my teammates...from going to Atlanta at 2 in the morning to coming back and spending the whole day with them."