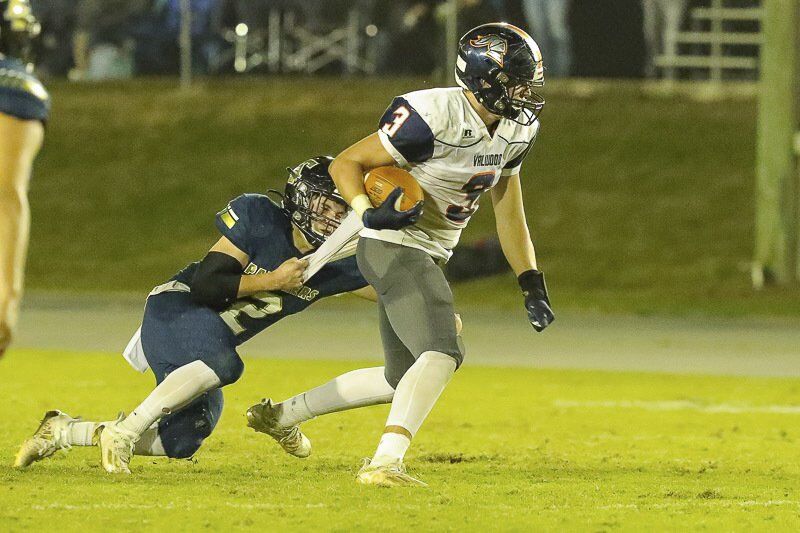 Mary Ann Miller | Special to the TimesValwood tight end Harrison Hamsley drags a Tiftarea defender on a run during a game Nov. 20, 2020 in Chula, Ga. Hamsley caught 12 passes for 141 yards and a touchdown in the Valiants’ 49-28 loss to the Panthers. 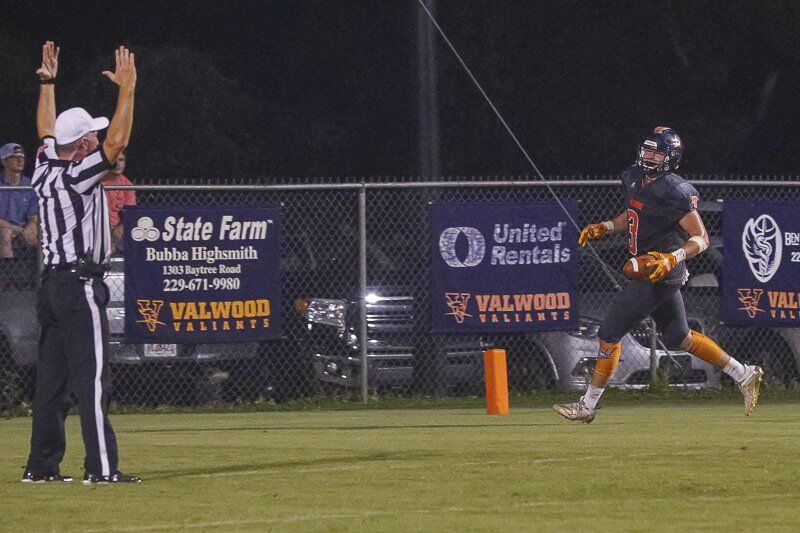 Mary Ann Miller | Special to the TimesValwood defensive end Harrison Hamsley (3) runs into the end zone for a touchdown against Baconton Charter Sept. 25, 2020 at Goddard Field.

Mary Ann Miller | Special to the TimesValwood tight end Harrison Hamsley drags a Tiftarea defender on a run during a game Nov. 20, 2020 in Chula, Ga. Hamsley caught 12 passes for 141 yards and a touchdown in the Valiants’ 49-28 loss to the Panthers.

Mary Ann Miller | Special to the TimesValwood defensive end Harrison Hamsley (3) runs into the end zone for a touchdown against Baconton Charter Sept. 25, 2020 at Goddard Field.

VALDOSTA –– A man among boys.

One look at Valwood senior Harrison Hamsley and there’s no mystery as to why he was the GISA Region 3-3A Player of the Year.

Hamsley worked tirelessly in the offseason to add weight to his frame to shoulder a more featured role for the Valiants. When Hamsley took the field to start the 2020 season, he’d grown to 6-foot-4 and 240 pounds –– having added 15 pounds of muscle to the 225-pound frame he played with as a junior.

For Hamsley, the offseason was all about goal-setting.

“Winning Region Player of the Year and making the All-State were my goals coming into the season,” Hamsley said. “Coach J-Hen (Henderson) and Coach Troupe helped me become the football player I am today and pushed me to be the best player I can be on the field.”

With his new and improved physique, Hamsley showed a lot of people what he was capable of –– a standout tight end that demands double teams on offense almost every Friday night.

One thing about football, sometimes the plays you make do not show up in the stat sheet. Hamsley being such a force on the offensive side of the ball called for a lot of coverages to be pulled his way.

Whether he was clearing the way for his teammates to get into the end zone or picking up big yards, Hamsley credits a lot of his success to his brothers on the field.

“My teammates are the best group I could ever ask for and are going to be my brothers forever. I could not have accomplished what I’ve done this year without those group of guys by my side every week battling at practice and in the game.”

Hamsley had several plays this year that made anyone watching recognize his talent and impact on the field. When the Valiants needed a big play throughout the season, they called on No. 3, their top target affectionately known as “Hammy”.

Going through a strenuous season on and off the field, Hamsley showed time and time again that he was going to be there for his team when they needed him the most.

In key games this season, Hamsley showed up and showed out when the lights were brightest. Hamsley made one play that is most likely going to stick with him when he is playing on Saturdays.

Going up against Southland, in a huge region matchup late in the third quarter down by 6, the Valiants called on “Hammy” to make a play in the red zone. Not only did Hamsley make the play, he made a spectacular one-handed grab over a Raiders defensive back to give the Valiants the lead.

For the season, Hamsley accounted for 736 all-purpose yards, with 58 receptions, and nine touchdowns. On defense, despite the constant double teams he faced, Hamsley finished the season with 20 tackles, six sacks, two forced fumbles, one interception and one defensive touchdown.

In his final high school game, Hamsley caught 12 passes for 141 yards and a touchdown in the Valiants’ 49-28 loss to Tiftarea Academy.

Garnering Region Player of the Year honors and making the All-State Team as a senior, Hamsley admits it feels particularly sweet to accomplish the goals he set for himself in the offseason. If his senior season proved anything, it showed that no matter the circumstance, hard work always pays off.

“It feels great to know all of the hard work pays off,” Hamsley said. “To be able to be named Region Player of the Year and being named to the All-State team just is amazing.”