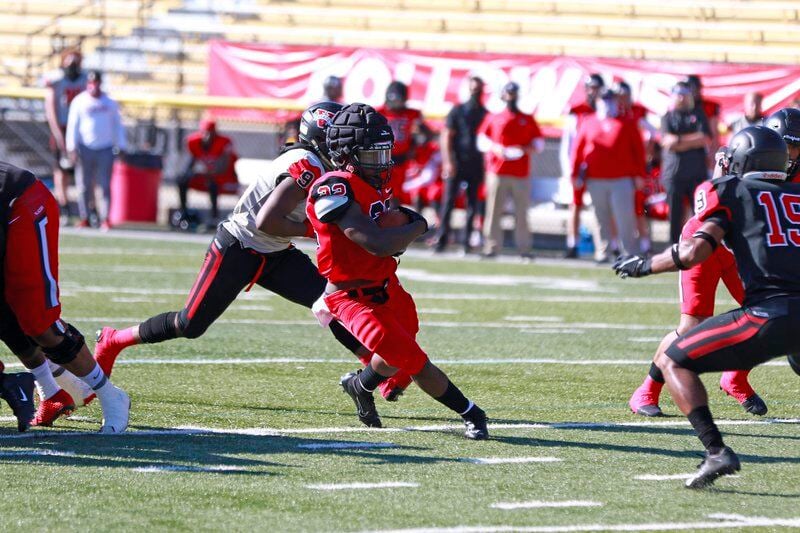 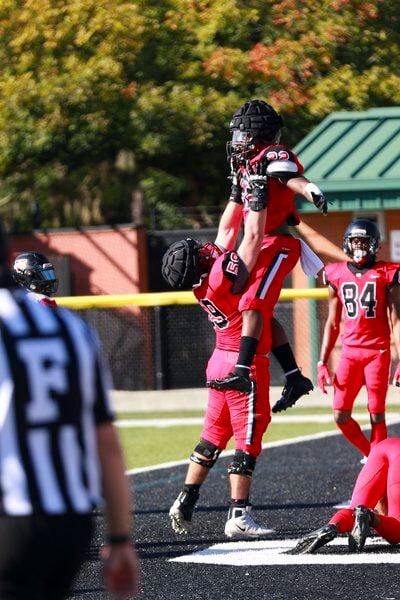 Shane Thomas | The Valdosta Daily TimesValdosta State running back Tan Gelin (22) is lifted into the air by offensive lineman Ethan Ingham (59) after scoring a touchdown for the Red team during the team's fall scrimmage Saturday at Bazemore-Hyder Stadium. 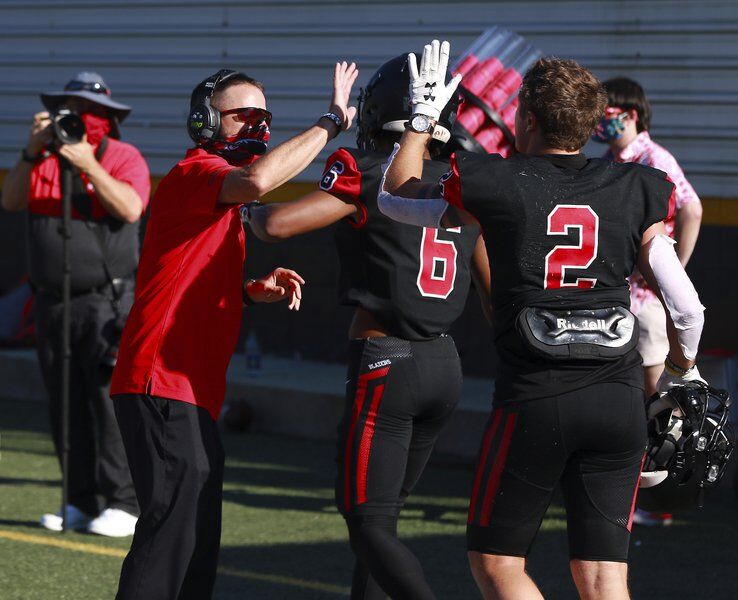 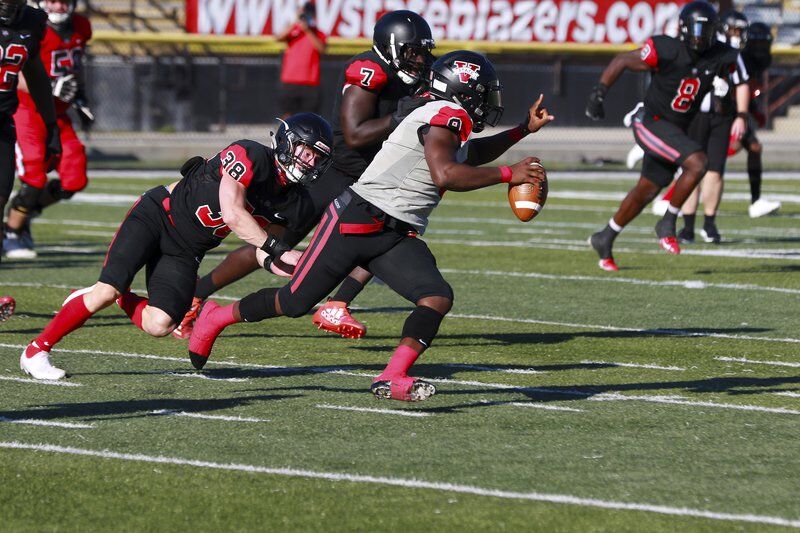 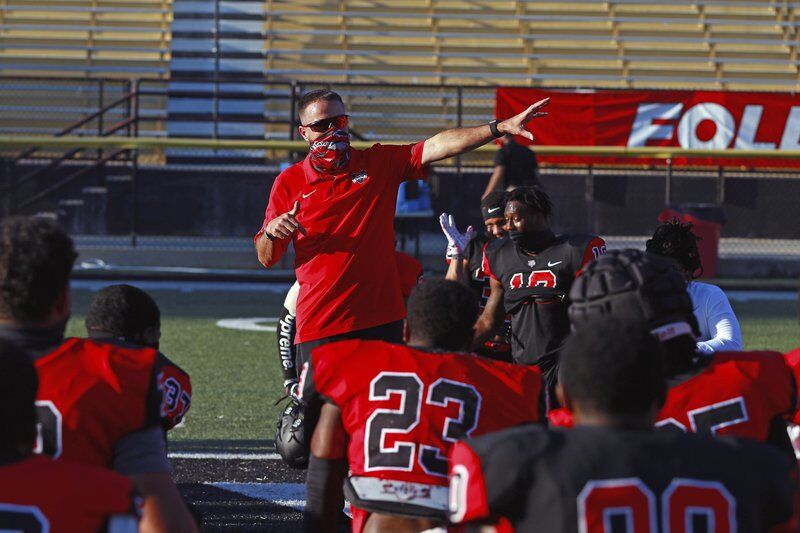 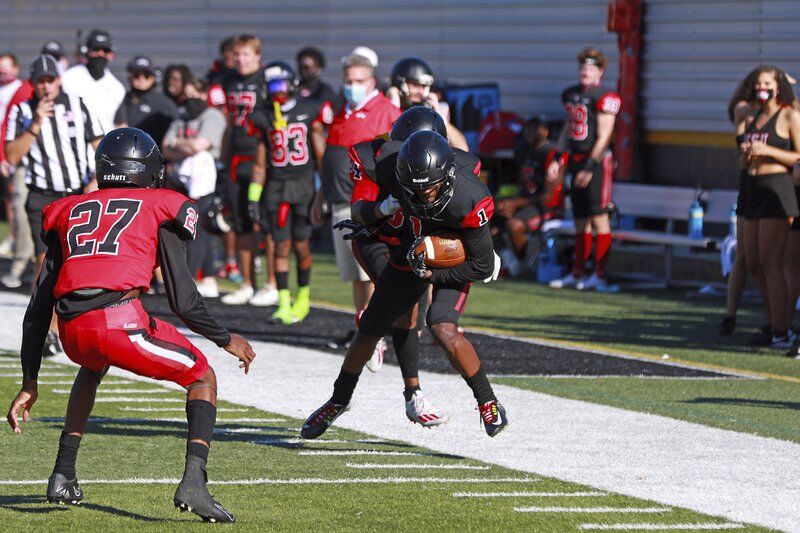 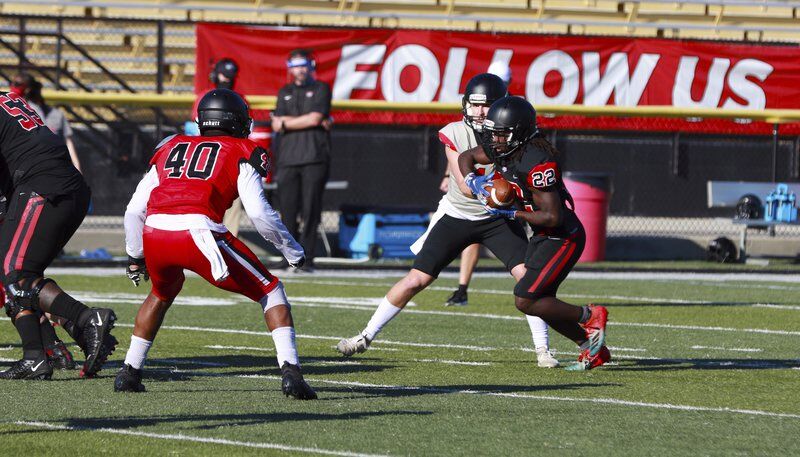 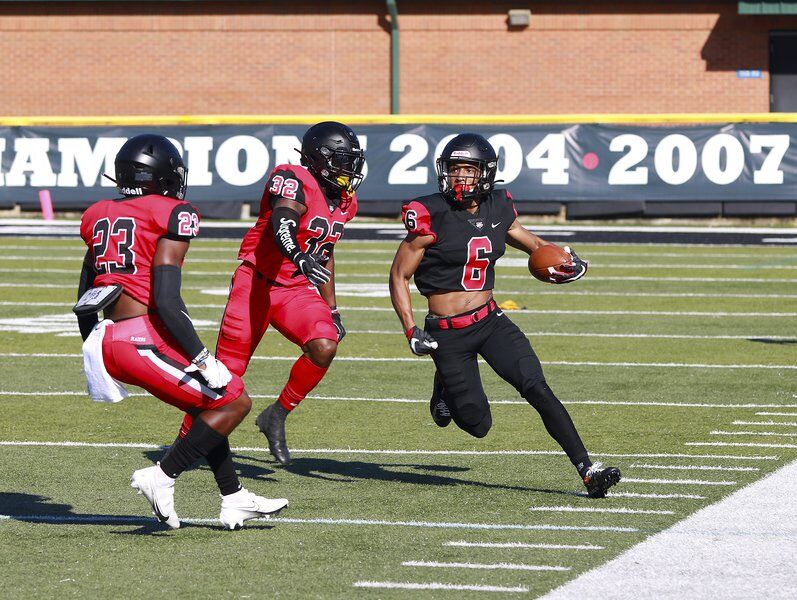 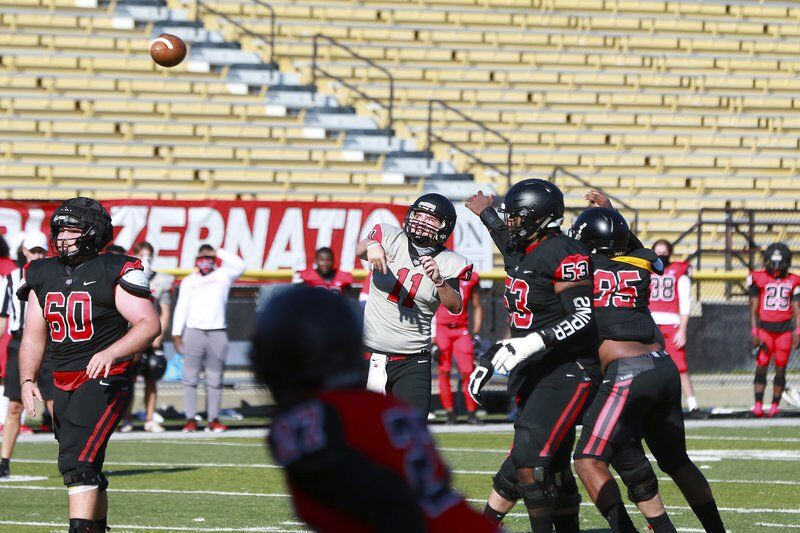 Shane Thomas | The Valdosta Daily TimesValdosta State running back Tan Gelin (22) is lifted into the air by offensive lineman Ethan Ingham (59) after scoring a touchdown for the Red team during the team's fall scrimmage Saturday at Bazemore-Hyder Stadium.

VALDOSTA –– For the first time since college sports were shut down March 12, Valdosta State played football in front of a crowd Saturday afternoon.

Much like the spring game, Team Red was spotted 14 points –– forcing the Black starting unit to come from behind to make the game more competitive.

On an 80-degree day with plenty of sun, a full band playing, fans in the stands and the VSU Red Hots cheering them on, Saturday’s scrimmage felt more like a season opener for the Blazers.

“It was fun,” Blazers head coach Gary Goff said. “This was the closest we could get to game reps. So, really, we basically played one game this fall and against ourselves. ... I was pleased. I wanted to make it very difficult for the Black team, which is primarily our starters and kind of put them under pressure situations and we did that pretty much all day.

“I’ve never played a fall game like this, but the points we scored, I’m very pleased with that.”

With the Red team nursing a 49-35 lead with 14:25 left in the game, it appeared they would coast to a victory as its defense had gotten the best of the Black offense.

Fans were treated to a familiar connection from last season as Black battled back behind starting quarterback Rogan Wells and go-to guy Brian Saunds. Wells found Saunds for an 18-yard strike to pull Black within a score of Red, 49-42 with 10:54 to play.

Neither team produced any offense for the next 10 minutes and 16 seconds of game-time. That is, until a newcomer in Black put a cap on an impressive debut.

Running back Khiari McCoy’s 10-yard touchdown run made it a 49-48 game with 38.2 seconds remaining.

Black elected to go for two, refusing to let the game end in a tie.

Wells rolled out and found receiver Kenny Benjamin for what would have been the winning conversion, but a penalty moved the Black team back 10 yards and forced a retry.

The Red defense held strong on the final play, sticking to the Black team targets well enough for Wells’ pass to sail through the end zone, ending the Black team’s comeback bid.

“It definitely (felt like a regular season game) on that last drive,” Wells said. “We felt the pressure that we’ve got to go score or it’s over.”

Wells continued, “It was a lot of fun –– it was great weather we had, a little hot, but coming out here and having our fans show up and our band was here, it was really exciting. This fall has been really weird with all the testing we’ve been doing. We get tested and we wait a couple of hours and we don’t know if anybody’s going to be positive or negative, so we’ve had to adjust a lot.

“Coming out here Saturday, I enjoyed it a lot. We had a lot of energy and I think everybody else did. We got to go live, too, and I know a lot of people had been missing hitting people...taking their anger out.”

No. 2 quarterback Ivory Durham looked in midseason form early on, busting an electric 28-yard scramble then finding Council Allen to get his Red team into the red zone. Durham promptly scored from a yard out to put the Red team ahead 21-0 with 7:25 left in the first quarter.

On the next possession, Wells helped get his Black team on the board –– engineering a drive culminating with a five-yard touchdown to Lio’undre Gallimore with 1:22 left in the opening frame.

“It felt great to be out there today with my brothers,” Durham said.  “We are just glad to be together and out there playing some live action football.”

The Red defense was opportunistic and sharp Saturday.

As the Black team put together another drive, Terrance Lovett intercepted Wells to set up good field position for the Red squad. Soon after, Durham found Isaiah Flowers for gains before Thomasville High School product Tan Gelin punched in a score to open up a 28-7 lead for the Red team with 9:18 left in the second quarter.

Marcel Williams and Jaylen Williams came up with key interceptions in the first half. Williams snagged a pick-six from No. 3 quarterback Josh Jenkins and on the next Black team drive, while Wilson’s interception sparked a Red team scoring drive. Durham found Isaiah Wilson for a first down, then fired to Jaheim Jerry in the back of the end zone to make it 42-14 for the Red squad.

Durham used his legs for a three-yard score to make it 49-28 with 3:09 left in the third quarter.

Playing behind veteran running backs Jamar Thompkins and Seth McGill, McCoy looks to be the future of the running back position for the Blazers.

McCoy showcased a unique combination of elusiveness, speed and playmaking ability from the backfield. In the postgame media scrum, Goff lauded McCoy’s potential to help the Blazers moving forward.

“I tell you what, Khiari McCoy out of Columbus, Georgia is a playmaker,” Goff said. “He’s electric. He’s just scratching the surface as far as learning what we’re doing out here. He’s going to be a really good player for us.”

Goff also spoke glowingly of his freshman class, a group that did a lot of good things in their time on the field Saturday.

“On the Red team, there were a bunch of young players –– the receivers and the DBs made some really good plays, Jordan Billups out of Camden. I’m very excited. If there’s any positive to come out of this fall, it’s that we had 34 freshmen we got out here and worked with and taught them offense and defense and special teams schemes.

“In a normal season, you don’t get an opportunity to do that. You’re gonna look at them for a couple of days, maybe a week and then they go to scout team unless somebody really caught your attention. We’re really excited about that freshman class. They’re going to be some big-time players for us.”

The red jersey has black shoulder patches with red numerals trimmed in white.

After the scrimmage, linebacker Nick Moss gave his thoughts on the new uniforms.

“I love them,” Moss said with a big smile. “They’re tough. I love the new uniforms. I feel good in them!”