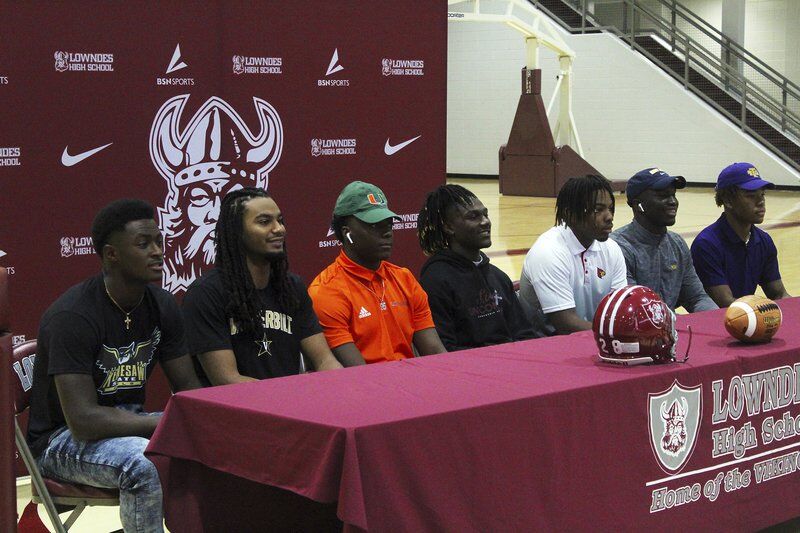 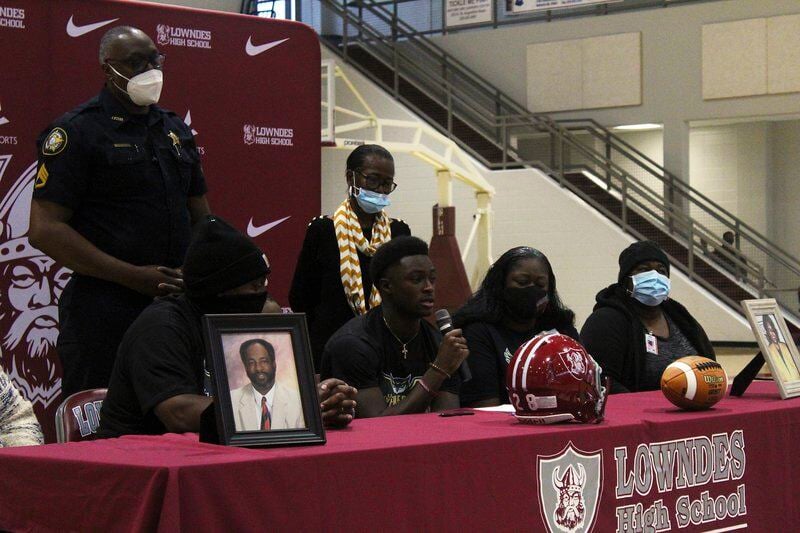 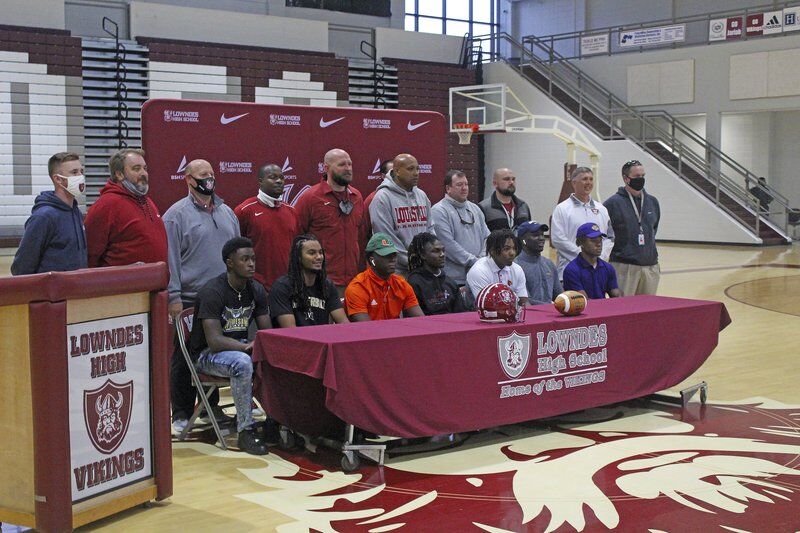 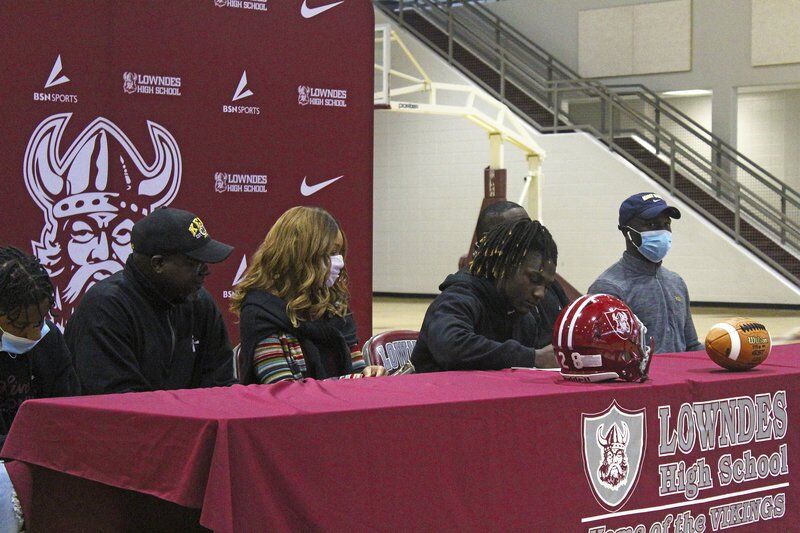 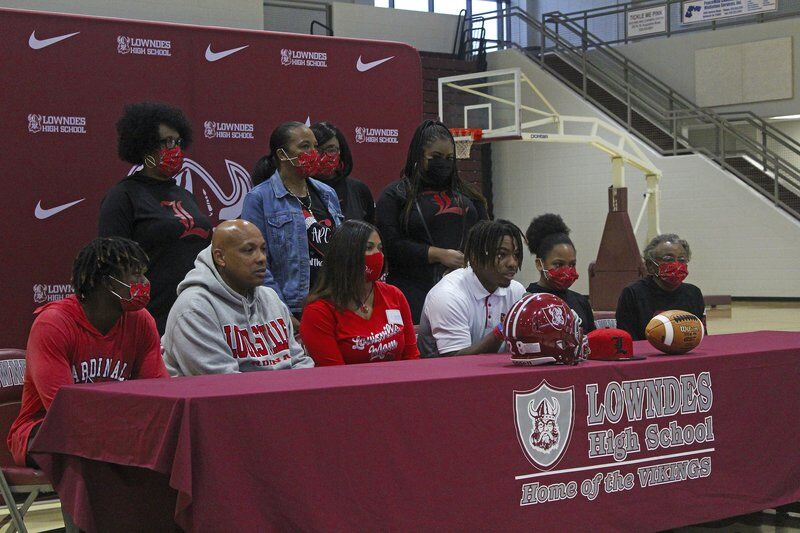 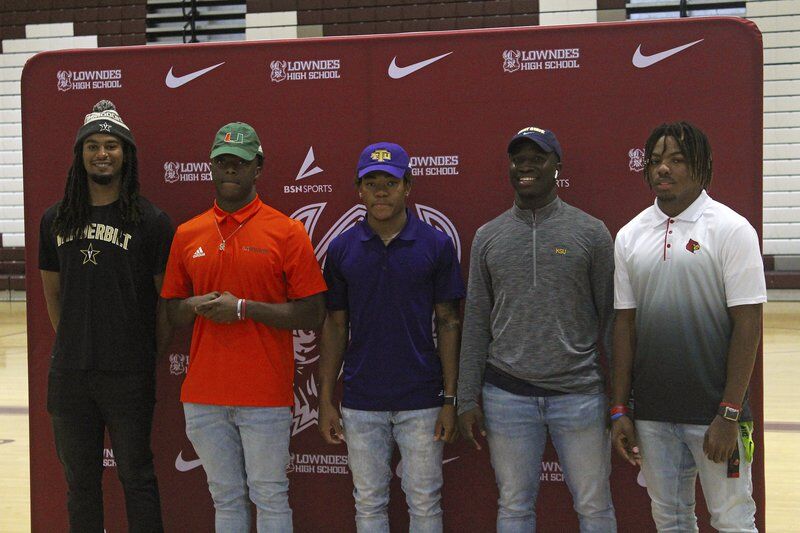 VALDOSTA –– Wednesday was the culmination of hard work and dedication for seven Lowndes seniors.

The ceremony was held in the Lowndes gymnasium and school officials sanitized in between each player’s signing.

The signing day signals the success of one of the best defensive units in the state for the past two seasons. Many of the players worked their way from unknown and underrated recruits, to some of the most sought after players in the state.

With the ink still fresh on their respective letters, the players couldn’t help but thank family, friends and their team for everything they’ve accomplished.

“I play football for them,” Davis said of his support system. “Put family first in everything … We’ve been talking about this since ninth grade when we first came in. We knew it was possible. We just had to chase it and ball out every time we go on the field. I’m proud of my boys.”

For one of the top ranked defensive units over the last two seasons this moment was years in the making. The trio of semifinals appearance is no fluke, it’s rooted in the Concrete Curtain’s talent—continuously outplaying opposing offenses.

“Them boys are my brothers,” Leon Williams said about his teammates that signed with him. “We’ve been through it all. We’ve been through every type of situation it’s been. I love them boys. To see them be happy, see the smile on their faces and to get through this. It’s a blessing for all of us. I love it.”

Quinn shared his sentiments, acknowledging the blessing of being able to achieve this day with his teammates.

“It’s just a blessing to be here,” Quinn said. “It’s been a long time coming. The journey from my ninth grade year up to now. It’s a blessing to be here … I believe it’s all part of the plan. We all knew that we could play on the next level, last year was just a testament to that when all of us started getting offers. To see us, it’s just a product of it. What happened on the field is why we’re here now.”

The sole offensive player to sign early was Marshall. He went from playing behind three seniors last season, to one of the top wide receivers in 7A.

As Marshall approached the table to announce his commitment, he was overcome with emotion. It was a result of a promise kept to his late grandfather, that he’d sign to play collegiate football no matter the level.

He’s honoring that by going to Kennesaw State, but prior to his transition, he has unfinished business.

Marshall and the rest of the signees will try to help Lowndes make its second state championship appearance by defeating Collins Hill.

“It feels awesome, all these guys that you’re looking at right now I’ve known them since I was younger,” Marshall said about his teammates’ success. “None of the relationships were only since high school. I’ve known them since middle school and some of them in elementary school. Just coming up at a young age with these guys and now we’re to the top it feels great. But we’re not done yet.”

Lowndes will hold another signing day in February for any players that did not get the opportunity to sign on Wednesday.