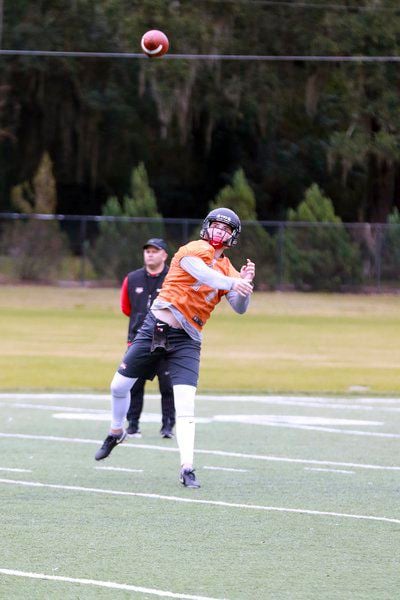 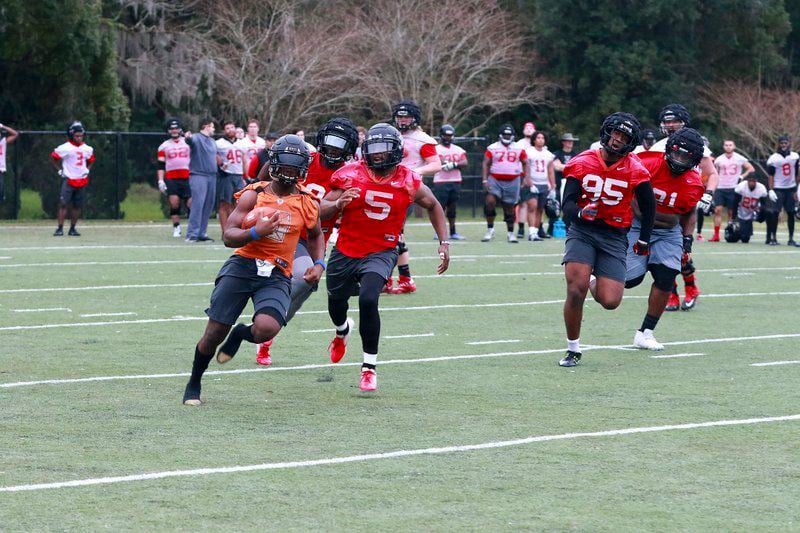 Shane Thomas | The Valdosta Daily TimesValdosta State quarterback Ivory Durham (9) breaks out on a run during the team's first day of spring practice Monday at the VSU Athletic Fieldhouse. 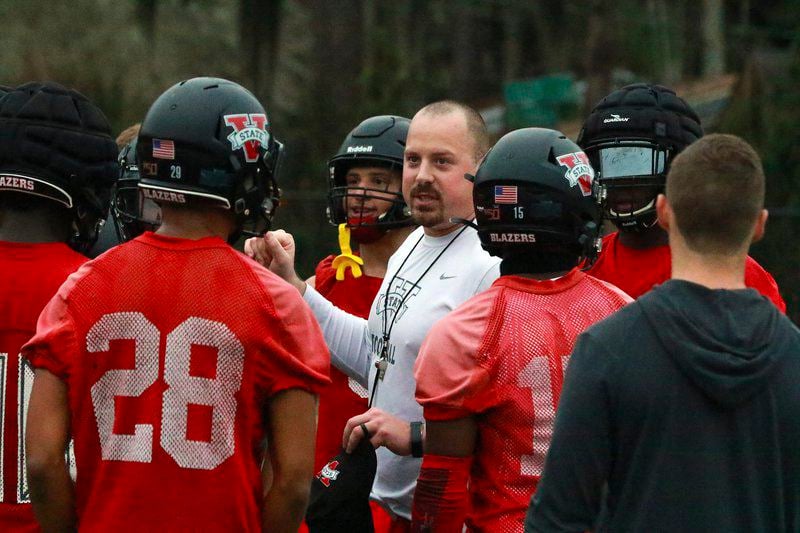 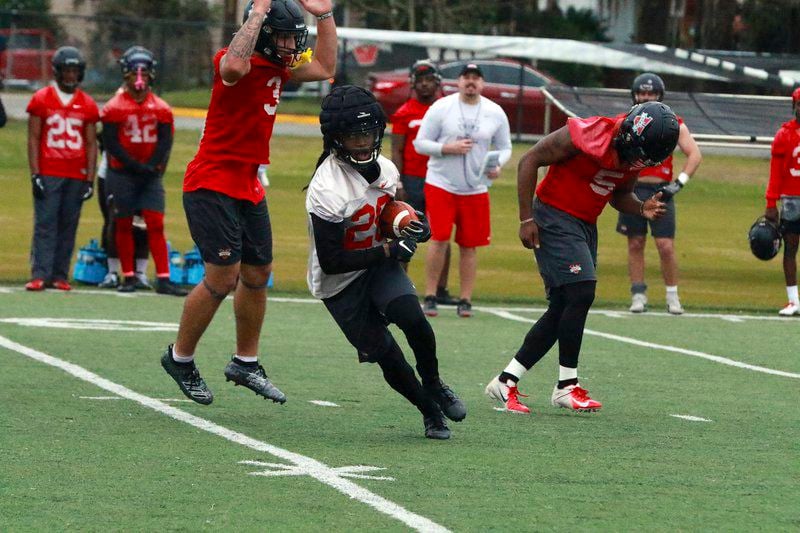 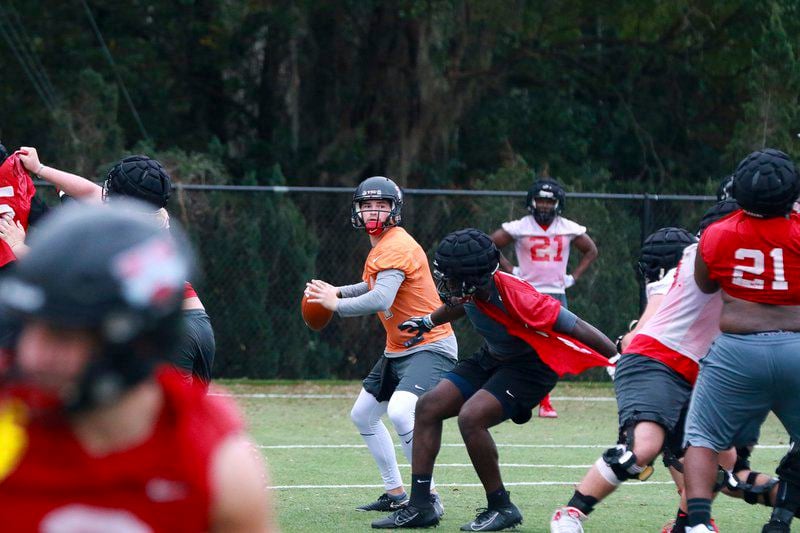 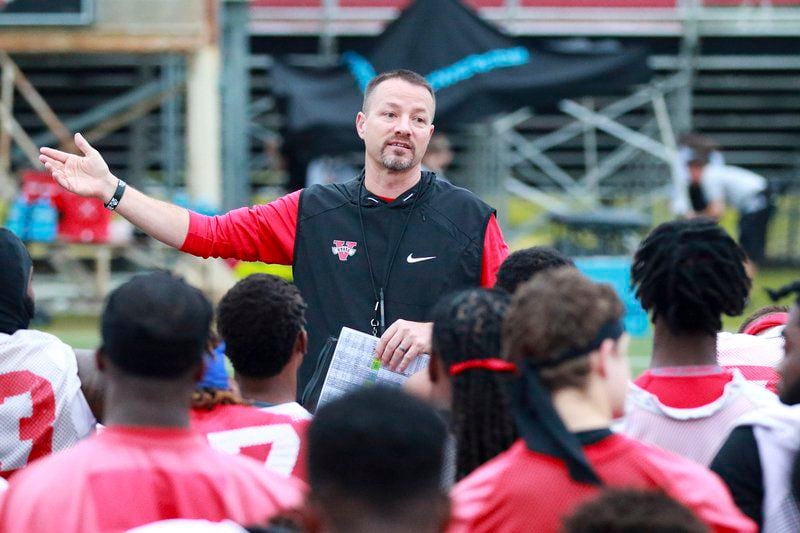 Shane Thomas | The Valdosta Daily TimesValdosta State quarterback Ivory Durham (9) breaks out on a run during the team's first day of spring practice Monday at the VSU Athletic Fieldhouse.

The Blazers hit the field at the VSU Athletic Fieldhouse and for as many new faces they had in uniform, there were plenty of familiar faces leading the way.

Senior quarterback Rogan Wells showed some zip on passes downfield, juniors Ivory Durham and Jamar Thompkins showcased their speed in space. The Black Swarm defense flew around and made its presence felt early and often through Day 1.

All in all, the Blazers hit the field fired up for their first football action since Nov. 30.

"I thought it was really good," VSU defensive coordinator Lee Stalker said. "Obviously, the guys –– you expect them to be fired up. You expect them to be high energy, flying around. The really important part of it all was you saw them communicating. There's been a lot of growth from this first day of spring last year to this spring. Day 1, the communication part –– they're working together and also they're playing fast. So, I thought it was really good."

The Blazers signed 31 players on National Signing Day –– 16 from Florida, 13 from Georgia, one from Alabama and one from Maryland.

Of the 31 players, eight were offensive linemen. There were also six wide outs, six defensive linemen, three quarterbacks, three defensive backs, two tight ends, one running back, one linebacker and one specialist acquired on Signing Day.

"First and foremost, you look at the defensive line," Stalker said of the Blazers' needs on defense. "We just graduated three senior defensive tackles, guys who played a lot for us. We've got guys in waiting, guys who are redshirted, guys who have transferred in, but we wanted to acquire a lot of high school talent –– be able to build for the future at defensive tackle and defensive end.

"I thought we brought in four really dynamic guys. At linebacker, we're pretty heavy –– we brought in one. We went ahead and signed four DBs in the class for the future. We've got a lot of talent coming back this year –– a lot of those guys shouldn't be forced into a role before they're ready, but if they come in and they can mentally pick it up and play hard, they've all got a chance."

The Blazers are coming off a 10-1 season under head coach Gary Goff. Two years removed from a national championship, the Blazers looked poised to repeat until Gulf South Conference rival and eventual national champion West Florida had its say. The Argos defeated the Blazers 38-35 on a touchdown run with 6 seconds remaining.

A lot was said about the Blazers' early exit, but one thing that cannot be underestimated is what Goff and his staff were able to accomplish –– starting 10-0, winning the GSC, and maintaining the No. 1 spot for much of the 2019 season. Though much of the 2018 national title team was still intact, getting those same players to adopt a new philosophy proved quite challenging in the early going.

Since the season ended, the focus for the Blazers is no different than any other team come spring time: Getting better.

"The most important thing you try to develop as a new staff is that trust factor –– getting guys to buy in to trust what you're coaching, to trust you as a person and trust you on a day-to-day basis," Stalker said. "Early on, it took time. We got into Fall camp and I think we were still battling with that with some guys. Through the season, I think they found out that, 'Hey, this works. We can be competitive. We can win games.'

"At the end of the day, us losing a playoff game to a very good team is no knock on anybody. It's a matter of getting better, knowing where our weaknesses are –– that might be in recruiting, getting better talent and also, it might just be us getting better at what we do."

Monday's practice was the first of 14 scheduled sessions for the Blazers leading up to the annual VSU Spring Game on March 12. Practices will be held each Monday, Tuesday, Thursday and Friday at 4 p.m.

One thing the coaching staff paid much attention to on Monday was how the players would attack Day 1. Stalker believes as spring practice unfolds, the experience of last season will allow veteran players to pass knowledge along to the newcomers and the veterans will, in turn, be able to teach things to the staff.

"The most important thing is really the mental side," Stalker said of the spring schedule. "Our guys can understand the what –– they understand what to do, the call, they understand where it puts them, the coverage and their responsibility. But now, the real big focus is them learning –– the ability for them to learn concepts and almost teach each other, teach us.

"Then obviously the how, getting really good at the technique. I think we'll be able to throw a lot more at them this spring because the knowledge aspect has been there since the fall and try out different things we may want to pull out in the fall for season. ... I think the growth day-to-day will be immensely much better."