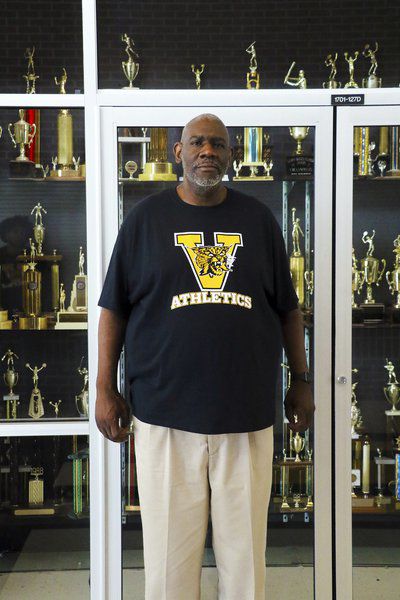 Shane Thomas | The Valdosta Daily TimesDarrell Lockhart was a second-round draft pick (35th overall) of the NBA's San Antonio Spurs in 1983 and played in Europe until 1998. Tuesday, Lockhart was introduced as the new boys basketball coach at Valdosta High School. 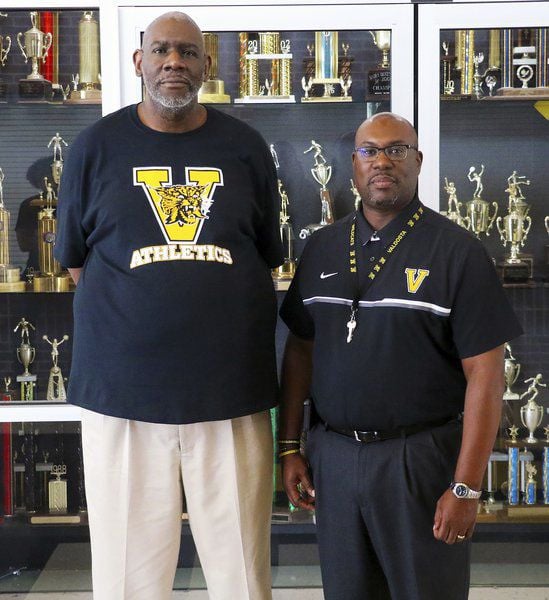 Shane Thomas | The Valdosta Daily TimesDarrell Lockhart was a second-round draft pick (35th overall) of the NBA's San Antonio Spurs in 1983 and played in Europe until 1998. Tuesday, Lockhart was introduced as the new boys basketball coach at Valdosta High School.

Lockhart was drafted by the San Antonio Spurs with the 35th overall pick in the second round of the 1983 NBA Draft –– the same draft as future NBA legends Ralph Sampson and Clyde "The Glide" Drexler. A rookie out of Auburn, Lockhart shared a locker room with NBA Hall of Famers Artis Gilmore and legendary swingman, George "The Iceman" Gervin.

Lockhart had played in only two games for the Spurs when his NBA career took an unexpected turn. By Nov. 12, 1983, Spurs head coach Morris McHone informed Lockhart he would be released. After the Spurs started the season 4-5, McHone told Lockhart, "Things aren't working out."

Lockhart signed with Bancoroma Roma (now Virtus Roma) of the Euroleague. It was here where Lockhart's eyes opened to a whole new world that would shape the course of his life forever.

Lockhart and his new teammates opened the regular season on the road. Emerging from a corridor, wading through the smoke-filled gym overflowing with humanity, Roma was pelted with hostile chants, coins and other objects.

"I look back on it and I think God had a hand in it because of what He was able to allow me to experience overseas," Lockhart said. "I remember my first time playing basketball in Rome. We were playing on the road and we walked into the gym. The gym was full and they had a rag doll hanging on a stick and they burned it –– they were lighting it on fire. It was crazy, smoke everywhere. We had to pause the game for a while until the smoke cleared. It was crazy.

"Stuff like that, that stuff went on all the time. After a while, you just begin to expect it. The thing I gained most from that experience is that it helped me learn to remain calm on the sideline and focus on the job at hand."

A native of Thomaston, Ga., Lockhart arrives in Valdosta after 14 years as head coach at Upson-Lee High School. During his time with the Knights, Lockhart amassed 294 wins and back-to-back Georgia Class 4A state championships in 2017 and 2018.

Lockhart played high school basketball at Robert E. Lee High School, which later combined with Upson to become Upson-Lee High School in 1992. When he was 12 years old, Lockhart was cut from his first basketball tryout, providing the spark for his love of basketball.

"On my way home, I was so upset," Lockhart recalled. "I went home and picked up a basketball and it's never left my hand since."

Lockhart came back the next year, making the team and helped lead Robert E. Lee to the state playoffs. In fact, the team advanced all the way to the state finals in Savannah before losing 58-57 in the championship game.

From there, Lockhart blossomed into an All-American and garnered the attention of several high-profile schools that coveted the young big man. Most memorably for Lockhart was the time he met legendary UNLV coach Jerry Tarkanian.

"I had so many colleges coming in," Lockhart said. "I had three or four letters from major colleges a day. ... One time, I had Jerry Tarkanian sitting down in the office wanting to talk to me and I just flipped. I said, 'This guy flew all the way out from Las Vegas to come to Thomaston, Georgia just to get me to go to school there.'"

After fielding several offers, Lockhart chose to sign with Auburn. He played all four years with the Tigers, averaging 11.1 points and 5.7 rebounds in 111 career games.

As a junior, Lockhart became teammates with perhaps the school's most famous basketball product –– Charles Barkley.

"I haven't talked to Charles for a while," Lockhart said. "I've talked to people that talk to Charles. He was crazy. To see so much talent, it's just crazy –– 300 pounds, jumping and running like he did when he first came to Auburn, it was just amazing to me. I haven't seen it since.

"It was just God-given talent, the things he was doing out there on the floor. You could tell he was going to be one of the greats. He was a good guy, he just can't stop talking. He says what comes to mind and sometimes it hurts you and sometimes it doesn't but he's that way and he's still that way. I wish I had more years, but it was fun to play with him at Auburn."

"I was kind of surprised when Coach Haynes informed us he was going to step away from coaching," Mitchell said. "We had to do something quickly, especially with basketball –– they start so soon with summer basketball. I keep a short list of names of coaches and immediately, I started reaching out to different coaches and ADs, find out who were some of the best coaches out there.

"The more I contacted coaches, the more Coach Lockhart's name came up. Lo and behold, he reached out to me and wanted to make sure we did have an opening and if so, he was interested. ... We are elated to have him. From his playing career playing at Auburn with Charles Barkley and playing in the NBA and overseas for many years and the fact that he's won two state championships and went undefeated both years, his head coaching record is just through the roof."

Lockhart led the Knights to a 25-2 record last season. For a 'Cats team that finished 12-15 last season, Lockhart's arrival couldn't come at a better time.

On the sidelines, Lockhart uses his steely, calm demeanor to survey the court much like he did during his playing days.

"I see the game as if I'm playing it," Lockhart said. "I think that's a big reason I've been able to do some of the things I've done. I see it as if I'm on the court and I know what the first reactions are going to be with my players.

"From my playing days, I still see the things that have to be done as a player and I try to get players to do that."

Upon arriving at Valdosta High School for the first time Tuesday, Lockhart was shocked by the size of his new location.

"When I drove in, it was my first time seeing the high school," Lockhart said. "I'd heard it was a big high school, but I drove in right here and thought it was a college [laughs]. My first impression was, 'Wow!'"

When asked if he feels any pressure with his new position, Lockhart remains calm yet confident.

"I want to win. Valdosta wants to win, so that's there," Lockhart said of the expectations joining the 'Cats. "I'm not going to say I don't feel pressure, but I don't feel pressure. I put more pressure on myself than anybody can put on me, that's just how I am; always have been.

"I think that's a good quality to have, but I know how to get it done. I'm not gonna say we're going to win (every game), but I know the players are going to play hard and when they play hard, good things happen."

Of course, as basketball coach, Lockhart also embraces the responsibility of leading a group of student-athletes off the floor as well.

While he can certainly fall back on his experiences playing for the Spurs as well as his overseas career playing in Italy, Belgium and Spain for the better part of 13 years, Lockhart wants to emphasize the importance of having more options than just basketball.

At Upson-Lee, Lockhart built his coaching philosophy based around a team-oriented approach. A self-described "team guy", Lockhart believes that philosophy is critical to success.

In recent years, Lockhart's Knights teams were prolific offensive teams that also got it done defensively. Last season, the Knights averaged over 72 points per game while allowing just 45.7 points per game.

"Defense is first and foremost," Lockhart said of his core values as a coach. "For years, we've had great offensive teams at Upson, but when I go back and look at what was different, the difference has been defense. ... Everybody's looking to score but everybody ain't looking to play that defense."

"We focus on defense and trying our best to rebound the ball and hit free throws –– I think those are the three most important things when you talk about winning championships anyway. And, looking back, that's what we've been able to do at Upson Lee."

Now Lockhart will be charged with building a winning culture to the VHS boys basketball team. Though football has always reigned supreme, Lockhart sees a hungry team ready to stake its claim as the school's next big thing.

"Valdosta is a great sports town," Lockhart said. "I'm all for football and the coaches. I wish them the best of luck. I feel like I belong here. I've just talked with the players and I see that hungry look on their faces. They just need some direction...which way are we going and I think they're ready to get it done."