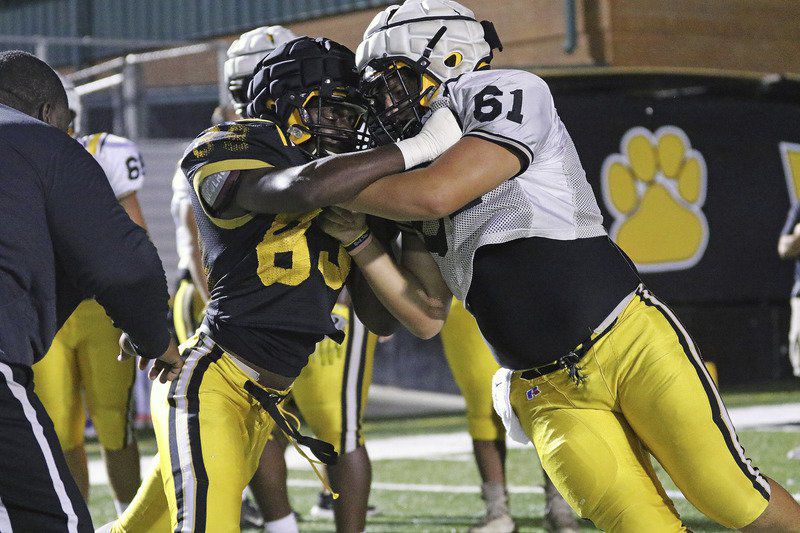 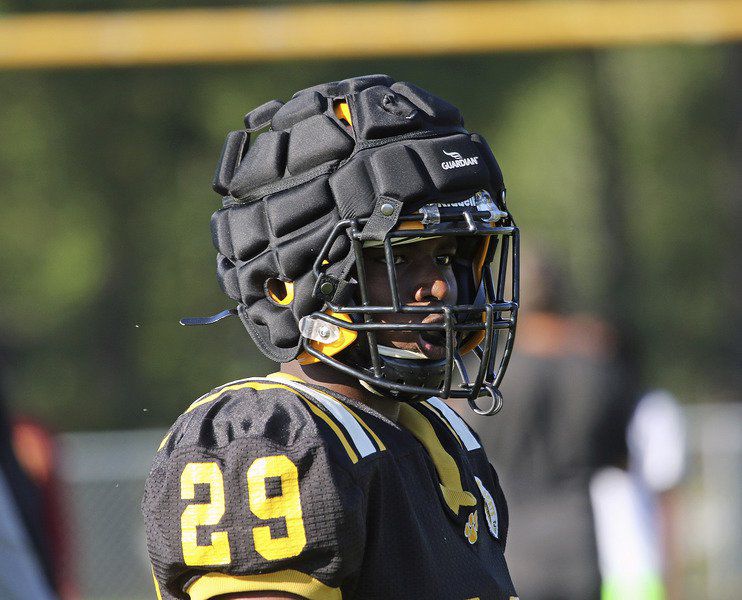 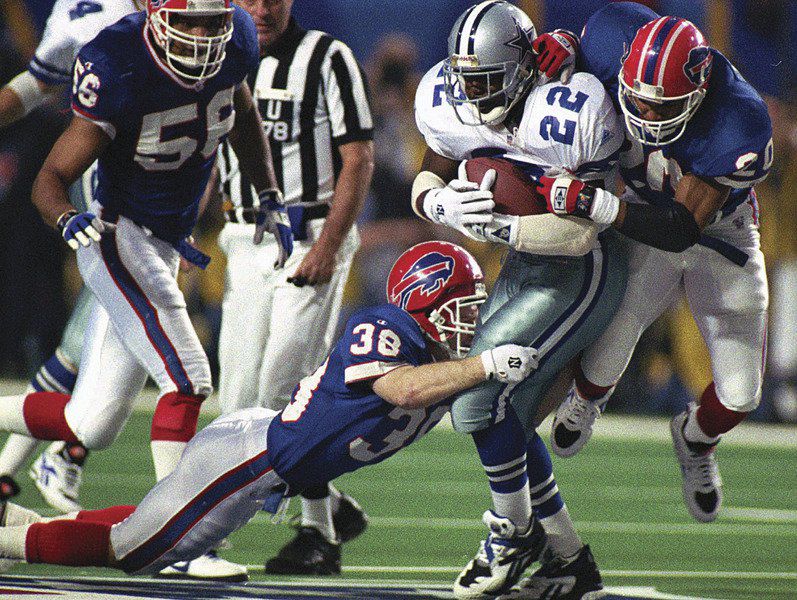 Associated Press File PhotoBuffalo Bills safety Mark Kelso (38) sports a ProCap as he brings down Dallas Cowboys running back Emmitt Smith during in Super Bowl XXVIII in Atlanta on Jan. 30, 1994. 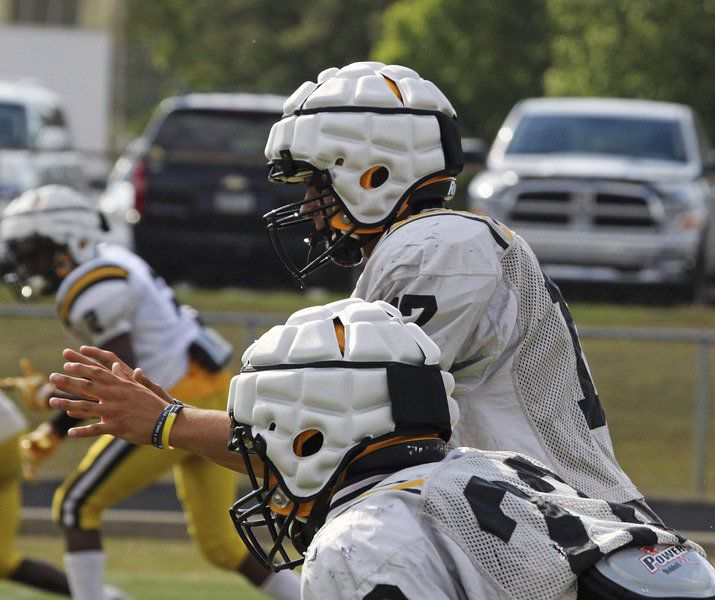 Football continues to hold a special place in the hearts of millions in the U.S. alone.

An annual survey conducted by the National Federation of State High School Associations calculated that 1,085,272 high school students played on their school's 11-player tackle football team over the 2015-16 school year.

But concerns regarding how to best protect the players has grown as well.

The primary concern in recent years has focused around the potential brain injuries associated with playing football, and the conversation has ramped up in light of a study published July 25 by researchers at Boston University.

According to the study, that looked at a convenience sample of 202 brains from deceased football players across all levels of play, the degenerative disease chronic traumatic encephalopathy was diagnosed in 177 of the players (87 percent), including 110 of the 111 brains (99 percent) belonging to former NFL players.

CTE was diagnosed in three of the 14 brains (21 percent) belonging to high-school players.

One criticism of the study suggests the brains used in the research were donated by families who reported symptoms of CTE (loss of memory, erratic behavior, difficulties with balance, etc.) prior to death. The study doesn’t prove a direct link between participation in football and development of CTE,  but the researchers conclude CTE may be related to prior participation in the sport.

This spring, looking for ways to preserve the health of its football players, Valdosta High decided to take a chance on a product generating buzz around the country — the Guardian Cap.

The Guardian Cap is a soft-shell helmet cover designed for impact reduction, and according to information provided by Guardian Innovations, more than 50,000 Guardian Caps have been used on the field across youth leagues, high schools and colleges both in the U.S., as well as Canada and Germany from 2012-16.

Georgia Tech, Clemson and Florida State are among the high-profile schools to recently adopt the technology.

Valdosta director of operations DeMario Jones did research on the product and spoke with Tift County head coach Ashley Anders about the Blue Devils’ experience with the Guardian Cap throughout the 2016-17 football season. With the help of the Touchdown Club, the Wildcats purchased 50 Guardian Caps to try for themselves.

“They’ve been around for a little while, we’ve just never tried them before because there is an expense there," Valdosta head coach Alan Rodemaker said in April. “If I could put a bubble around our kids and have them go out there and play and never get hurt, that’d be my choice.

Guardian Innovations was formed five years ago by parent company, the Hanson Group, a material science company with nearly two decades of engineering and material science expertise. Its goal is to protect athletes by developing superior sports equipment, the company created the Guardian Cap to reduce the force of impact upon collision experienced by football and lacrosse players.

The desire to reduce the severity of the impacts inflicted by hard-shell helmets began as a means to solve a personal problem for Guardian Innovations co-founders Erin and Lee Hanson.

“We knew that there was a problem,” Erin Hanson said in a phone interview in May. “Our son was starting to play football and we just knew the helmet, we felt, would be better served not being a hard-shell weapon, and if we could take some of that impact off, at the minimum at practice, that we would be serving the players better.”

Recognizing the game wasn’t ready for a radical switch to soft-shell helmets, Hanson designed the Guardian Cap to be worn over a players’ usual helmet with four elastic straps connecting the soft shell to the facemask, and they claim it reduces the impact of hits by up to 33 percent by decreasing the linear acceleration of the hit without affecting the integrity of the helmet.

“Well, the first thing for us is to not, in any way, shape or form, purport to prevent concussions,” Hanson said. “We do not say that, because the science just isn’t there yet.”

In a study cited by Newsweek in February 2015, researchers from an independent helmet technology company and a nonprofit that supports research on sports-related concussions claim that products by Guardian Caps, as well as similar companies Unequal and Shockstrips, only reduce angular acceleration — which some claim is force believed to cause concussions — by 2 percent (although the Hansons dispute that figure).

The article goes on to cite one of the study’s researchers, John Lloyd, who says, “There’s this entire myth that concussion relates to linear acceleration. Biomechanists like myself have known for a long time that that’s not the case.”

On the other hand, Dr. Ben Hogan, a Valdosta physician specializing in sports medicine and the medical director of Valdosta State University’s athletic training education program, believes the true mechanisms behind a concussion are still relatively unknown to medical experts.

Some have also called into question the “drop test” method, which involved dropping helmets from different heights, used to conduct the experiment cited as a meaningful representation of the product’s use.

The coaches at Valdosta aren’t concerned with experimental results, though. They’re just looking for a way to protect their players, and so far they've said the Guardian Cap has done just that.

In Rodemaker’s first season as head coach of the Wildcats, he eventually had to cut out pre-practice board drills after seeing multiple players suffer concussions.

Aside from the health concerns down the line, Rodemaker didn’t want to risk his players missing up to a week or more in concussion protocol before they’re cleared to return to practice.

Since ordering the Guardian Caps this spring, only one Wildcat player has suffered a concussion and he wasn’t wearing one of Valdosta’s 50 available caps.

“I would say they’ve already made a significant improvement to what we’re doing,” Rodemaker said Wednesday. “My plan is to just buy more next year. I’d love to put all of them in it.”

Valdosta is far from the first program to report a reduction in head injuries since moving to the Guardian Cap, though the company has chosen not to pass along the anecdotal results to its customers.

And the Guardian Caps are about more than just head injuries. The soft-shell barrier can cushion the impact between the helmet and whatever it’s making contact with, be it a quarterback’s hand, a running back’s legs, etc.

“The one thing that I’d really like for people to understand is, everybody does wrap everything around the concussion issue; teams are doing a great job of limiting contact in practice, but there’s still a lot of blows that are incidental,” Hanson said. “With helmet-to-turf, when they fall forward or backward, helmet-to-knee, helmet-to-elbow, hand injury where the quarterback comes down and hits a hard-shell helmet, or someone’s hand getting caught between two hard-shell helmets, we feel that reducing the ability of that hard-shell helmet to be used in that way during practice is a good thing for these guys.”

Valdosta’s football team plans to continue to outfit its high-repetition players with Guardian Caps during practices throughout the season, but it’s possible the soft-shell helmet makes an appearance on Friday nights some time in the future.

The NFHS has permitted the use of Guardian Caps for both practices and games, but ultimately left it up to the individual states to make the final call.

In 2013, the Colorado High School Activities Association declared the Guardian Cap could not be worn during games, but the Florida High School Athletic Association approved the caps usage in games.

The Georgia High School Association hasn’t permitted the use of the Guardian Caps in games yet, but GHSA football coordinator Tommy Whittle said an executive committee meeting of the organization’s trustees will be held in August to discuss the future possibilities.

Whittle said the biggest hurdle to overcome was likely the liability issue.

“The product itself is taking on the liability for the entire helmet, basically,” Whittle said. “If that is true, and our attorneys think that’s true, it’s got a real good chance.”

Hanson’s not sold on the Guardian Cap’s future in games either, citing the aesthetics of the game. She doubts players give up the flashy helmets employed nowadays for the soft-shell.

“That’s just a tough sell,” Hanson said. “There’s some pageantry to football, too. The guys like their shiny helmets on Friday night or at the colleges on Saturday, and they like to wear those.

“Some of the teams like our caps because they say they’re helmet protectors and they keep their paint and decal looking better.”

There’s clearly truth in Hanson’s statement. At one point, the ProCap appeared to make a difference in the career of Buffalo Bills safety Mark Kelso, who suffered four concussions in two NFL seasons from 1988-89.

In the four ensuing seasons playing with the helmet attachment, Kelso said he suffered just one concussion when a much heavier player kneed him in the side of the head.

But Kelso was mocked for wearing the helmet attachment, and the ridicule, along with a June 1996 memo Bloomberg writer John Helyar detailed in a 2013 news story, in which the NFL issued warning that the “standard helmet manufacturer’s warranty may be negated or modified by the use of the ProCap” in an attempt to snuff out any technology competing with the league’s official helmet manufacturer, Riddell, effectively killed the ProCap.

However, it may not be long until similar technology is back in the NFL.

The NFL has put aside $60 million for “HeadHealthTech Challenge” that encouraged companies nationwide from mom-and-pop starters to commercial businesses to submit proposals for improvements in football protective equipment. Guardian applied for the opportunity to gain access to the mentorship and research the program offered, and out of the thousands of companies Guardian Innovations was one of two selected, along with VyaTek Sports.

According to a statement released by the NFL, Guardian Innovations received a grant of $20,000 to support biomechanical testing of its Guardian Cap technology.

“That’ll be further vetting the product and determining where it best fits into the NFL,” Hanson said. “They see a lot of value in maybe even going position specific and it being used as a lineman cap.”