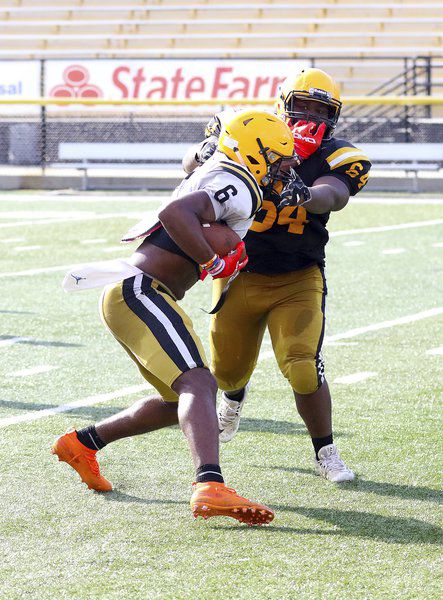 Shane Thomas | The Valdosta Daily TimesValdosta's Jaheim Bell (6) stiff-arms a defender during a run on Day 5 of spring practice May 8 at Bazemore-Hyder Stadium. 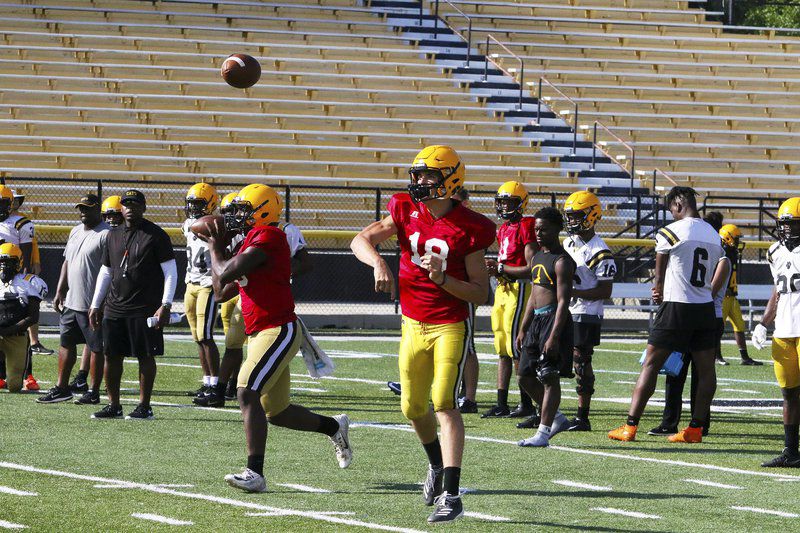 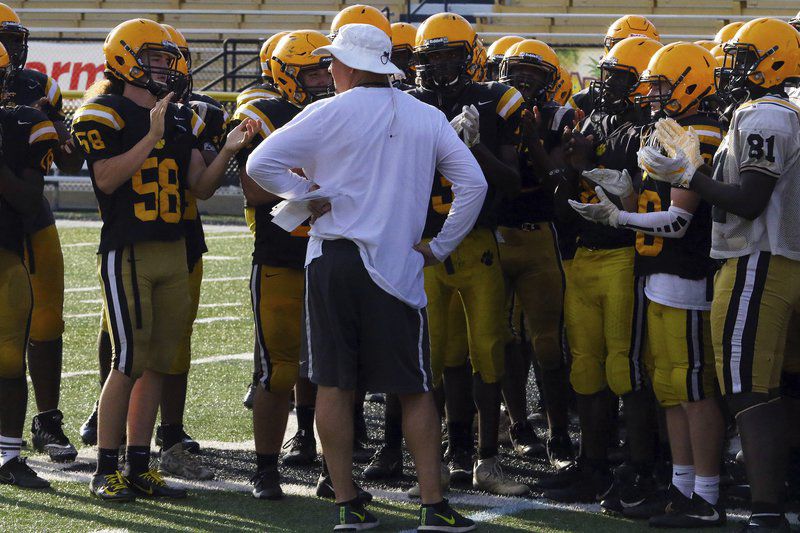 Shane Thomas | The Valdosta Daily TimesValdosta's Jaheim Bell (6) stiff-arms a defender during a run on Day 5 of spring practice May 8 at Bazemore-Hyder Stadium.

VALDOSTA — Spring has sprung and now it's time for the Valdosta Wildcats to go live.

While there will be no unfamiliar opposition standing across from them tonight for their annual Spring Game, several 'Cats will be looking to show what they can do and secure playing time in the fall.

"I think the effort's gotten consistently better," head coach Alan Rodemaker said. "We've only had a couple bad days — that was Day 1 and Day 3. Since then, I think we've gotten better. Kids are buying in and I think they're growing. Some of them are getting a lot of confidence. ... I'm anxious to see them Friday night when they lay it out there.

"I expect us to not bust as many things. We've thrown a lot at them in the spring. This is always our first install, so we're never hitting on all cylinders. We'll be a little more simple Friday night, but I expect them to execute a little bit better. I don't expect to be perfect but I expect them to play really hard and to execute better than they have this week and last week. ... That's my expectation — hopefully they'll meet that. I just want to see them come out here and fly around and have fun. Only with enthusiasm will you show any improvement. I want them to have great enthusiasm and fly around and have fun. I know they'll execute better if they do that."

QB Tate Rodemaker: Senior quarterback Tate Rodemaker will man the first-team offense. Currently a three-star prospect, Rodemaker broke out as one of the top quarterbacks in Georgia as a junior. Rodemaker garnered First-Team All-State honors as he set the new single-season school passing yardage record with 3,539 — shattering Seth Shuman's previous mark of 3,190 in 2015.

The 6-foot-4, 195-pound signal caller threw for 31 touchdowns with just 10 interceptions last season. As his stock continues to rise, Rodemaker is coveted by as many as 15 schools — Memphis, Tulane, Boston College, Coastal Carolina, Eastern Kentucky, Akron, Appalachian State and South Florida among others.

Jaheim Bell: The most highly sought after prospect for the 'Cats has been hampered by a hand injury during the spring. Bell, who committed to the University of Florida, heads into his senior year with a chance to further cement himself as a future Florida Gator. Bell had 52 catches for 770 yards last season.

If Bell is able to play in the spring game, he will get a chance to show a glimpse of what's in store this coming season.

RB Kaleb Robinson: Sophomore running back Kaleb Robinson has already shown enough on the field to snag offers from Duke, Cincinnati and North Carolina State. With the departure of senior running back Rajae'z Mosley, Robinson will be counted on to carry more of the load in the backfield.

RB/WR Tarrell Roberts: A threat from the backfield and out wide, senior Tarrell Roberts is perhaps the most explosive and speedy weapon at head coach Alan Rodemaker's disposal. The 5-foot-7 Roberts along with fellow receiver Willie Trapp and Bell make up a trio of playmakers for the 'Cats. Rodemaker said as much following Day 8 of spring practice Tuesday.

“Tarrell Roberts is the guy right now,” Rodemaker said. “Willie Trapp had a couple good catches today. I think both of those guys are leading us right now. Jaheim’s been hurt the last couple of days with a little hand injury, but those two guys are difference-makers for us.”

Roberts has already received offers from South Alabama and Tennessee Tech and has a chance to reel in many more when the regular season opens Aug. 23

On defense, the 'Cats will get a chance to test themselves in a live setting tonight.

In terms of standouts, 'Cats defensive coordinator Justin Montgomery broke down his group after Tuesday's practice.

“We have a ton of potential for a lot of standouts,” Montgomery said. “We have Josh Hill, who was a starter for us every game last year as a sophomore. Jaylin Alderman’s a returning start. Maxwell Cherelus has been out with a hamstring injury, he’s a returning starter. All those guys are going to be juniors this season and those guys are going to be playing a lot more confidently.

“We’ve got a new guy who didn’t play with us last year in Reggie Bell. He’s showing up (this spring). We’ve got a young guy Isaiah Holland that’s coming up at the safety spot and they’re competing a lot right now. I’m excited about what they can be — a ton of potential for those guys. Quinton Wade has stepped up big this offseason, just really starting to play at a higher level of football. Interior guys like Jylon Bennett that just do their job every play and John Brown, he’s come back. He had a lot of mental errors last year and was hesitant as a sophomore. No hesitation right now, he’s playing fast and playing really good football. Those guys, this spring, have shown up and done a good job.”

The 'Cats will have plenty of eyes fixed on its defense this season after fielding perhaps its worst defensive unit ever last season. The 2018 'Cats allowed 33.9 points per game last season and struggled to take pressure off the 'Cats prolific offensive attack. While the offense produced 36.4 points per contest, the defense simply couldn't get enough stops to provide a comfortable margin for error.

Thus far this spring, Montgomery is confident things will be different this season. But tonight's spring game will be the first test.

“I expect us to keep this mentality, I expect us to take it up another level when the lights come on,” Montgomery said. “I expect our guys to play with an edge — that’s what I want to evaluate. I want to evaluate guys playing hard when we’re up and playing hard when we’re down; being consistent in that department. The Xs and Os, you’re going to make mistakes on Friday nights, especially in the spring but I do expect our guys to play extremely hard (tonight) and bring that Valdosta defensive mentality back.”