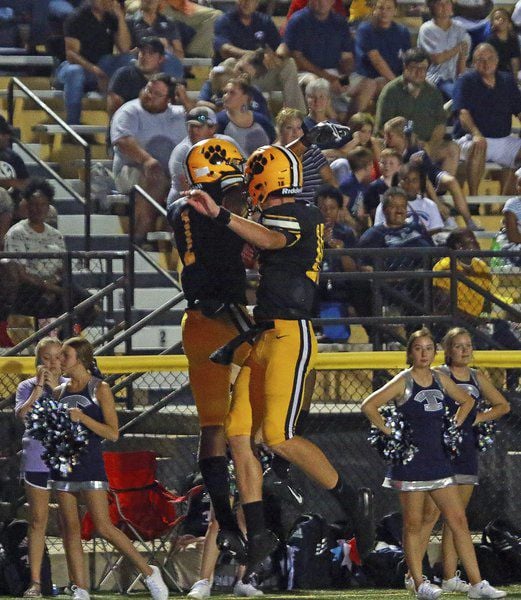 Shane Thomas | The Valdosta Daily TimesValdosta’s Jaheim Bell (1) and Tate Rodemaker (18) celebrate after hooking up for a touchdown during the second quarter against Tift County Friday at Bazemore-Hyder Stadium. 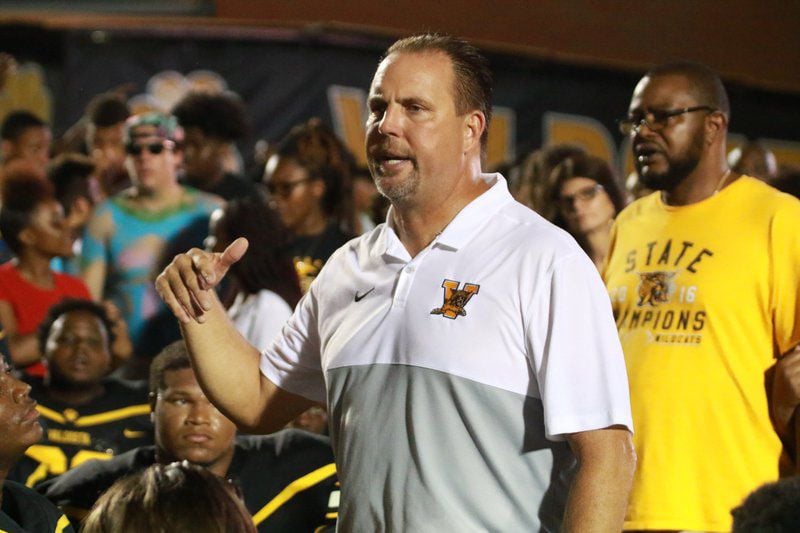 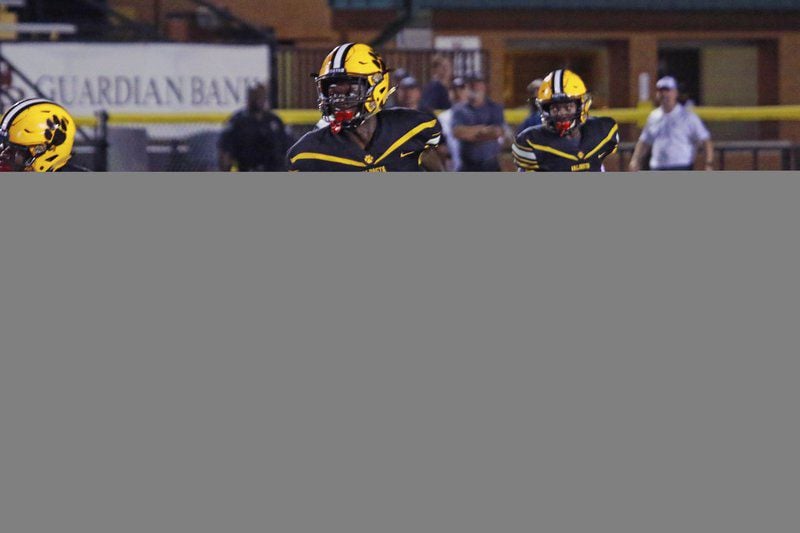 Shane Thomas | The Valdosta Daily TimesValdosta’s Jaheim Bell (1) and Tate Rodemaker (18) celebrate after hooking up for a touchdown during the second quarter against Tift County Friday at Bazemore-Hyder Stadium.

VALDOSTA –– “How ‘bout them Wildcats?”

Those were the raspy, gleeful words of Valdosta High head coach Alan Rodemaker to his team after Friday night’s triumph.

The ‘Cats (2-0) took a 10-0 halftime lead and turned it on its head, erupting for 27 points in the third quarter to break the game wide open.

“(Tift) has gotten us the last two years and I think they had confidence and they played well,” Rodemaker said. “Coach Anders has got a good football team and they’ll get going, but I think ours was a little hesitant when we started the game. We just didn’t have confidence (at the start). I think getting our tails whipped the last couple of years kind of hung with us probably too long.

“That first quarter, we had to figure out we could play with them. Actually, tonight we were better than them, but it took us a while to figure that out. Opening up the second half, most of us, especially on defense, felt like we could win this game. You could just see it happening. It was just confidence.”

Tate Rodemaker shook off a slow first half, throwing four touchdowns after halftime. His last of the night going to Tarrell Roberts for 34 yards with 5:23 left in the third quarter.

An interception by the Valdosta defense set up another score as Rodemaker lofted a feathery pass on a fade to Willie Trapp for an 8-yard touchdown to put the ‘Cats ahead 30-0 with 7:22 left in the third quarter.

“Willie’s another one –– Willie’s a 6-3, 6-4 wide out that’s got all kinds of potential in the world, but he hasn’t done a lot,” the coach said. “He had some big plays last year after games were decided, but he’s playing real minutes now in real games and that catch was big for him. You watch him, he may take off.”

Rodemaker also praised his defense for making timely plays to set up bigger plays against the Blue Devils.

“I think we had some big plays,” Rodemaker said of the defense. “Zakye Mathis’ pick early and then as they had a good drive going, Elijah Norwood’s pick down towards the goal line –– you can’t even measure how big those plays are. Those are huge for us on a mental side for our entire football team. ... We played hard. The further it went and as we started stopping them, we played with more confidence. If you could buy confidence, I’d spend all the money I have.”

The ‘Cats came out with fire to start the second half as Rodemaker connected with Javonte Sherman on a pair of touchdowns –– a 40-yard score to open up a commanding 17-0 Valdosta lead just 55 seconds into the third quarter then another almost a minute later for 19 yards to swell the lead to 24-0 with 10:09 left in the third.

With 57.1 seconds left in the first half, Rodemaker hit Jaheim Bell in the back right corner of the end zone for a 21-yard touchdown. Mattis’ extra point opened up a 10-0 halftime lead for the ‘Cats.

“I thought Jaheim made a great catch right there and Tate threw a good ball,” Rodemaker said of the play.

The first half saw both teams making plays on the defensive end but struggling to capitalize with points. Valdosta managed to convert more miscues in the first half as Zakye Mathis’ interception set up a 25-yard field goal by the ‘Cats Delroy Mattis to put Valdosta ahead 3-0 with 7:17 left in the first quarter.

Both teams traded three-and-outs much of the first quarter. Rodemaker hit Bell for 23 yards, but a personal foul penalty called the gain back before leading to a Valdosta punt. Rodemaker found Javonte Sherman for 15 yard on a critical 3rd-and-9 play for a first down, but Rodemaker was sacked for a loss of six yards and the Tift defense stopped the ‘Cats to bring up 3rd-and-16 from the 24-yard line. Tift’s pressure yielded results as Rodemaker was picked off by Wendell McClain. Following a personal foul on Valdosta, Tift looked to take advantage of the interception.

However, the ‘Cats stopped Tift running back Walt Jackson for no gain then forced an incompletion by Tift’s Joe Almond to bring up third-down. Senior Elijah Norwood picked off Almond on the ensuing possession, but the ‘Cats were unable to score on the drive as Mattis missed on a 40-yard field goal attempt.

As far as the rivalry goes, the ‘Cats avoided their first three-game losing streak against Tift County and moved to 50-10 all-time against the Blue Devils.

“We certainly prepared for these guys,” Rodemaker said of Tift County. “Really probably two weeks, the week we had between our scrimmage (and the opener), we spent on Tifton. ... The theme for the week for us is improvement. We’re going to try our best to be better next week than we were this week. That’s the goal. We’re not playing as good as we can play, but tonight, I thought we took a big step.”

The ‘Cats host the Bradwell Institute Tigers on Sept. 6. Kickoff is scheduled for 8 p.m.