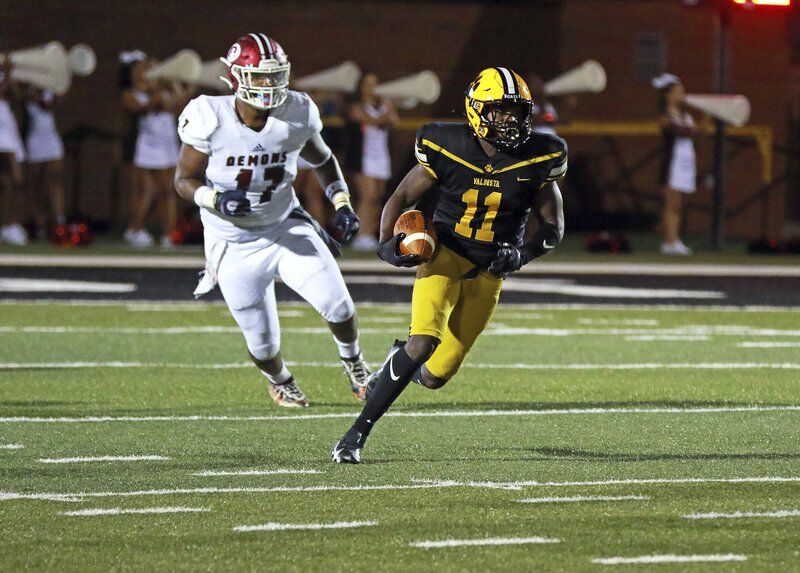 Shane Thomas | The Valdosta Daily TimesValdosta wide receiver Tajh Sanders (11) runs after a catch during a game against Warner Robins Friday at Bazemore-Hyder Stadium. Sanders had a game-high seven receptions for 159 yards and two touchdowns in the game. 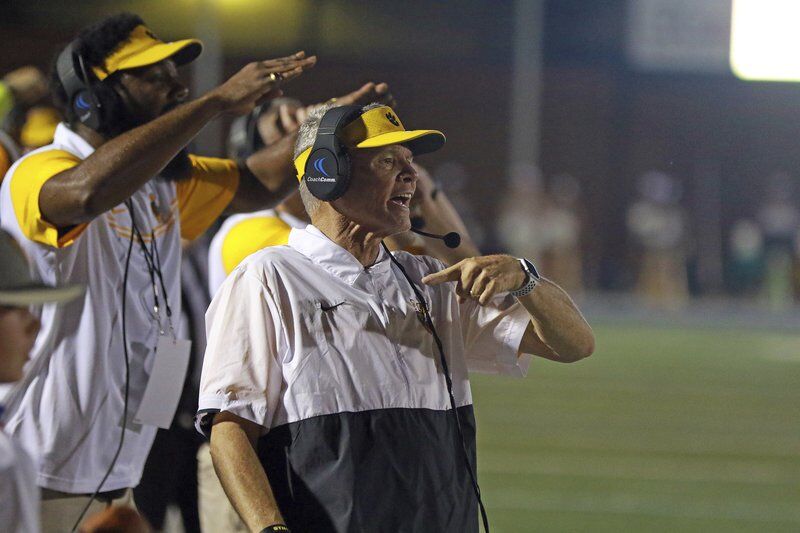 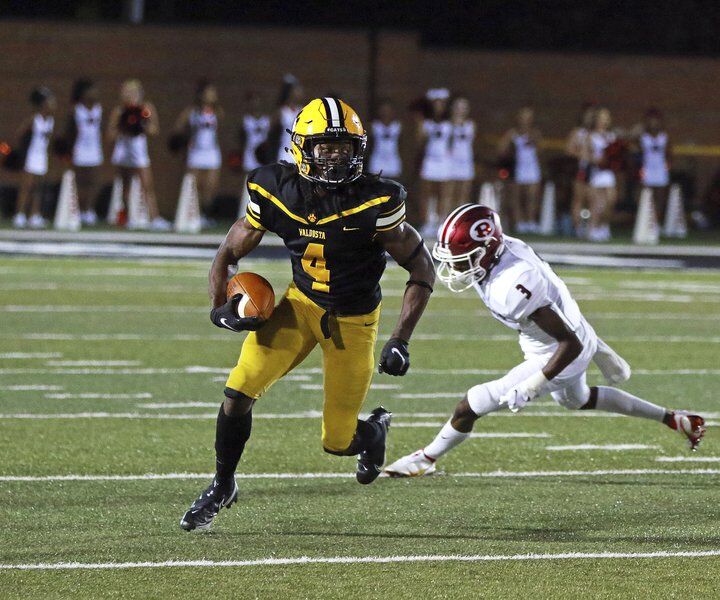 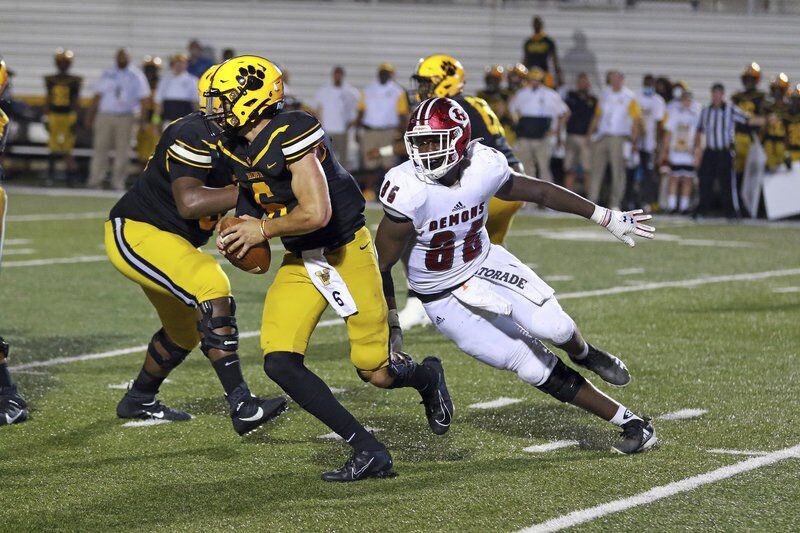 Shane Thomas | The Valdosta Daily TimesValdosta quarterback Jake Garcia (6) tries to get away from Warner Robins defensive end Vic Burley (86) during the second half of a game Friday at Bazemore-Hyder Stadium.

Shane Thomas | The Valdosta Daily TimesValdosta wide receiver Tajh Sanders (11) runs after a catch during a game against Warner Robins Friday at Bazemore-Hyder Stadium. Sanders had a game-high seven receptions for 159 yards and two touchdowns in the game.

Shane Thomas | The Valdosta Daily TimesValdosta quarterback Jake Garcia (6) tries to get away from Warner Robins defensive end Vic Burley (86) during the second half of a game Friday at Bazemore-Hyder Stadium.

Junior placekicker Angel Martinez's 41-yard field goal with 25.3 seconds left put Valdosta ahead for good as the defense stopped the Demons from marching down the field for any last-second heroics.

"We had some things going pretty good, but really it turned into Sherman and Aalah Brown and Tajh Sanders –– those three guys," Propst said. "I'm just proud of the way we finished the game, especially there at the end (defensively)."

After struggling to find or sustain any momentum much of the night, the 'Cats found a spark in the form of senior receiver Aalah Brown and junior receiver Tajh Sanders.

Brown busted out a 50-yard kickoff return following a D'Marion Sturn 89-yard touchdown run for the Demons that injected some life into the 'Cats at just the right time.

After Brown's big return, quarterback Jake Garcia fired downfield to Sanders, who went in for a 45-yard score to make it a 25-23 game with 8:25 to play. Valdosta went for two and converted when Garcia hit Javonte Sherman cutting into the end zone to tie the game at 25.

Garcia, who was named the team's starting quarterback at the beginning of the week, struggled mightily in his first half as a starter. The University of Southern California commit, in the words of his head coach, looked lost. Garcia fumbled twice, threw an interception and was sacked several times trying to work in the pocket.

Despite his poor start, Garcia completed 22-of-34 passes for 332 yards with two touchdowns –– both going to Sanders –– in the win.

"With Jake, we simplified it in the second half to where he didn't have as much thinking to do," Propst said of his quarterback. "The first half, he was just lost. He was lost –– first game jitters, a new environment, a new place, all that kind of stuff."

Sanders had a game-high seven catches for 159 yards, while Sherman added three catches of his own for 85 yards.

Valdosta undid any semblance of rhythm they tried to build much of the night with a rash of penalties –– 11 for 75 yards in total. Many of the penalties stemmed from a lack of clock awareness as eight of the 11 flags were for false starts and delay of game violations.

Despite the disjointed nature of the 'Cats offense, the team finished with 367 yards of total offense.

One area Propst expressed some displeasure was his team's inability to move the ball on the ground. The 'Cats ran the ball 32 times for just 35 yards, with Kaleb Robinson contributing 10 carries for 31 yards and a touchdown.

The Demons finished with 412 total yards, 287 of which were total offense. Starting quarterback Jalen Addie went 11-for-20 for 168 yards with a touchdown, but was flummoxed by the Valdosta defense in the fourth quarter.

"Defensively, we're thin in some places, but we came to play," Propst said. "I really liked the way we finished the game putting pressure on the passer. I don't think they had a lot of time to throw the football, especially from about the 8-minute mark of the fourth quarter on. They didn't have anywhere to go with the ball."

The 'Cats entered Friday's game as underdogs against the Region 1-5A powerhouse Demons and emerged victorious. Considering the lack of an exhibition game to work all the kinks out, Propst likes the fight his team showed to come back but only began to harp on the litany of mistakes it committed in the opener.

"When you trail the whole game and then finally find a way to tie it with (8:25) to go, that's the turning point," Propst said. "We made a lot of crucial mistakes –– a kickoff return, we've got to look at our personnel and make sure we've got the right people in there. It reminded me of a first game scrimmage. That's how many mistakes were made. They always say you make your best improvement from Game 1 to Game 2, but that's after having a scrimmage game, too. I'll probably see the most improvement after Tift County. into the Bainbridge game."

Valdosta: Travels to Tifton next Friday to face the Tift County Blue Devils. Kickoff is scheduled for 7:30 p.m.