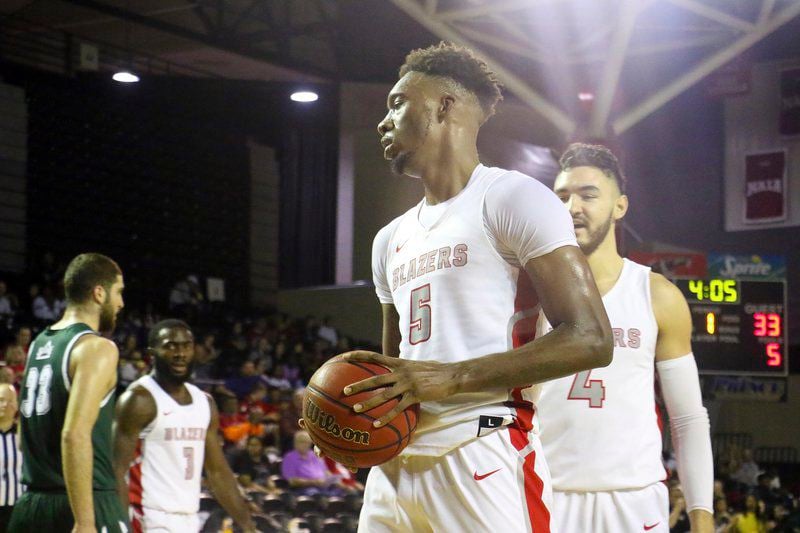 Shane Thomas | The Valdosta Daily TimesValdosta State center Bryce Smith (5) reacts after scoring a basket during the first half against Delta State Saturday at The Complex. 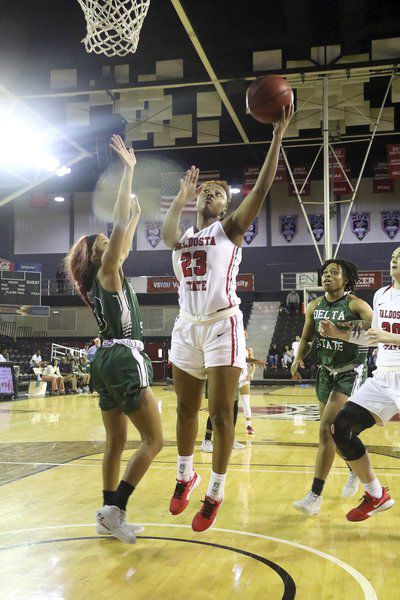 Shane Thomas | The Valdosta Daily TimesValdosta State guard Kayla Frey (23) lays the ball in during the fourth quarter against Delta State Saturday at The Complex.

Shane Thomas | The Valdosta Daily TimesValdosta State center Bryce Smith (5) reacts after scoring a basket during the first half against Delta State Saturday at The Complex.

Shane Thomas | The Valdosta Daily TimesValdosta State guard Kayla Frey (23) lays the ball in during the fourth quarter against Delta State Saturday at The Complex.

With one team finding its stride and the other stumbling, let’s run the floor:

Despite their 12-3 record, the Blazers lacked an identity prior to their five-game winning streak. Without the shooting of Beau Justice and Winston Morgan, there was no question the Blazers would look much different offensively this year.

The Blazers have found an identity during this winning streak: Defensive juggernaut.

Over the last five games, the Blazers are getting nearly 12 steals per game, leading to 25 points per game off of turnovers and nearly 12 points per game on the fast break. As a result, the team is pouring in 91.4 points a night while giving up just 67.4 to opponents –– an average win margin of 24 points per game.

“We’re just better defensively,” Blazers coach Mike Helfer said when asked about the key to the team’s winning streak. “We guard better, we help and rotate better and I think our guys are buying in and believing on the defensive end. That’s kind of been the change for us and that’s led us to win some games but it doesn’t get any easier going into Carrollton in front of a huge crowd. We’ll have to be ready.”

The Blazers’ defense has been making it hard for opponents to put the ball in the basket as well, having held teams under 40 percent shooting in three of the last five contests. Not only that, the Blazers have been very good defending the 3-pointer during this streak. Thomas University, West Florida, West Alabama, Mississippi College and Delta State combined to shoot 25-of-103 from beyond the arc –– 24.2 percent.

Conversely, the Blazers’ offense has seen an uptick in efficiency by capitalizing on their opponents’ miscues and poor shooting. The Blazers have shot 48.4 percent from the floor and 39.8 percent from 3-point range. If this team can maintain its intensity on the defensive end and combine that with this kind of offensive efficiency, look out.

Junior shooting guard DeMarcus Addie returned to the lineup against Mississippi College on Jan. 9 after a nine-game absence for undisclosed reasons. Without Addie, the Blazers hummed along but lacked his ability to spread the floor with his outside shooting.

Addie’s impact solidified itself in the Blazers’ win against Delta State over the weekend. Addie poured in a season-high 17 points on 6-of-10 shooting, including a season-best 4-of-6 from 3-point range. Proving his worth beyond just shooting, Addie also had three rebounds and two steals in 17 minutes.

“DeMarcus can really score the basketball, he can really shoot it,” Helfer said of Addie. “He’s a great lift for us right now because we’ve got him back and he’s playing. He’s a great kid who buys into everything we do. A team guy that plays super hard. We’re happy to have him back in the lineup and it was good to see him play well today.”

Three players have raised their level of play during the team’s winning streak: Burke Putnam, Cam Hamilton and Imoras Agee.

Putnam was inserted into the starting lineup against Thomas University and has flourished in the role thus far. Through five starts, Putnam is averaging 16.4 points, 4.6 assists, 3.6 rebounds and 1.6 steals per game. In terms of shooting, Putnam has been a plus for the Blazers as well. The junior is hitting 56.3 percent of his shots overall, 50 percent from 3 and 80 percent from the foul line.

Hamilton has been a revelation during this run, averaging 15.2 points and 3.6 steals while shooting 54 percent from the floor and 57 percent from 3 (17-of-30). Hamilton’s defense and shot-making off the bench has been vital to the team’s recent success.

Agee, perhaps the team’s best athlete, has put together three straight double-digit scoring games. The last time the sophomore accomplished this feat was at the beginning of the season when he scored 10-plus in each of the first three games.

Heading over to the women’s side of the spectrum, the Valdosta State women will look to get back to their winning ways Thursday at West Georgia. The team led much of the first half against No. 16 Delta State before succumbing to the Statesmen 66-59 on Saturday.

Against Delta State, VSU came out with some extra pep in its step –– building a lead as high as seven points and leading 32-28 at halftime. But the second half just came down to who was better on both ends of the floor.

Delta State’s Nia Johnson scored 15 of her game-high 23 points in the second half. The Lady Blazers were outscored 38-27 and committed 11 second-half turnovers. VSU cut the lead to four points with 1:29 left following back-to-back triples by junior Delaney Bernard. Delta’s Zyaire Ewing, who finished with 20 points and nine rebounds, answered Bernard with a basket inside with 1:06 to play that effectively put the game out of reach.

“Down the stretch, we didn’t make some key plays and they did,” VSU head coach Deandra Schirmer said. “Sometimes, when you face a really good team, that’s what they do –– players make plays. They’re a tough team –– they’re the No. 16 team in the nation, there’s a reason for that. You can’t let those teams get back in the game and that’s what I felt like we did in the third.”

Rebounding has dogged the Lady Blazers all season. Despite the size of Germani Abram and Abby Rouse up front, the team has not been able to finish off defensive possessions with rebounds with regularity this season. In fact, the Lady Blazers are being outrebounded by 2.8 boards per game on average.

At times, Schirmer says, it has been effort. Other times, it’s been positioning or the ball just not bouncing into the right hands. Despite giving up some key offensive rebounds late against Delta State, that game should be an encouraging sign for the Lady Blazers. The Statesmen came into that game boasting two of the nation’s top-10 rebounders in Ewing and leading rebounder Quantesha Patterson. Together, the duo averages over 25 rebounds per game –– on Saturday, VSU held them to a combined 15 rebounds.

VSU goes on the road to face rival West Georgia on Thursday, before heading to league-worst Shorter on Saturday.

Shane Thomas is the sports editor at The Valdosta Daily Times.