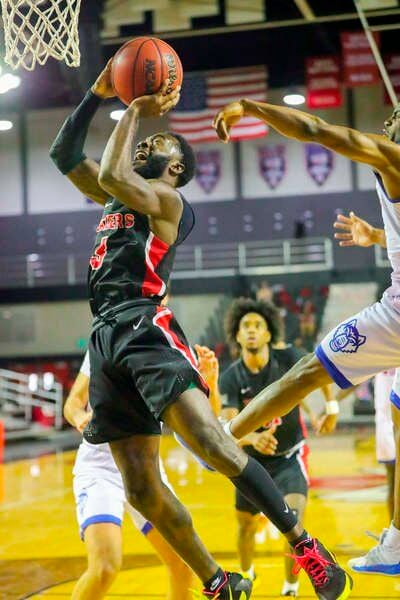 Mary Ann Miller | Special to the TimesValdosta State guard Cam Hamilton (3) lays the ball in during the second half against West Georgia Saturday at The Complex. 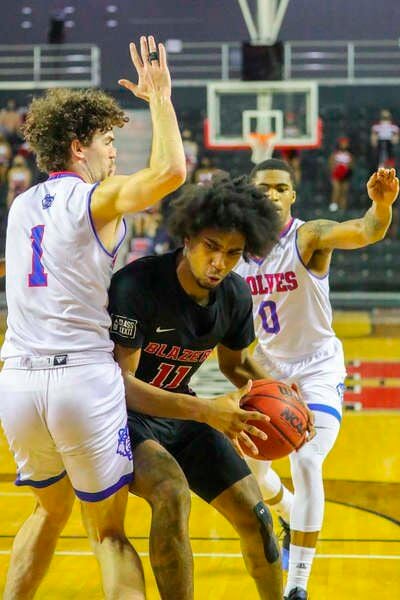 Mary Ann Miller | Special to the TimesValdosta State forward Mohamed Fofana (11) works in the post against West Georgia's Michael Zabetakis (1) and Kadeim Jones (0) during a game Saturday at The Complex. 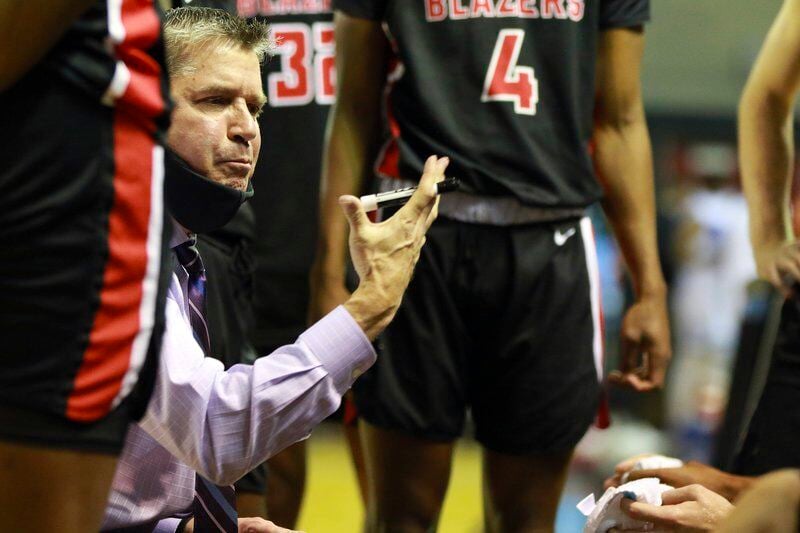 Mary Ann Miller | Special to the TimesValdosta State head coach Mike Helfer speaks in the huddle during a second-half timeout in a game against West Georgia Saturday at The Complex. 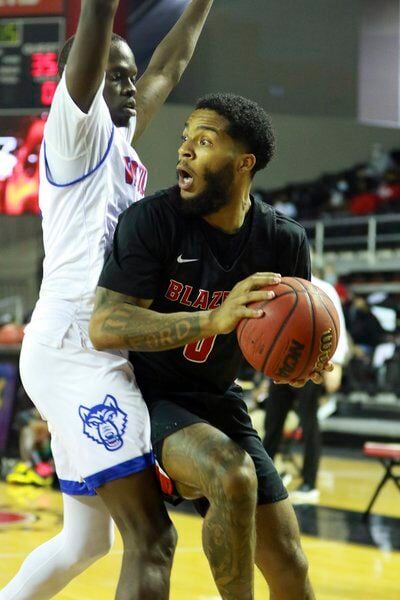 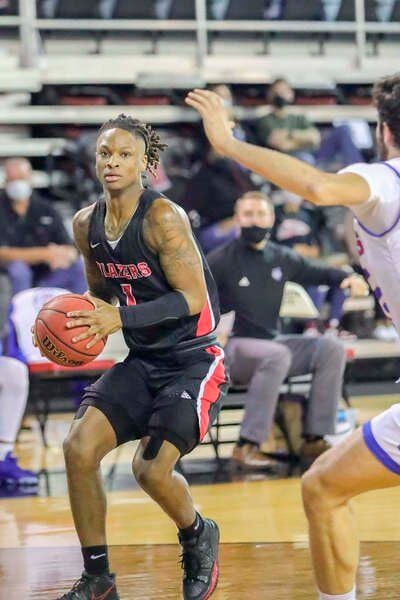 Mary Ann Miller | Special to the TimesValdosta State guard Jacolbey Owens (1) tries to get to the basket during a game against West Georgia Saturday at The Complex.

Mary Ann Miller | Special to the TimesValdosta State guard Cam Hamilton (3) lays the ball in during the second half against West Georgia Saturday at The Complex.

Mary Ann Miller | Special to the TimesValdosta State forward Mohamed Fofana (11) works in the post against West Georgia's Michael Zabetakis (1) and Kadeim Jones (0) during a game Saturday at The Complex.

Mary Ann Miller | Special to the TimesValdosta State head coach Mike Helfer speaks in the huddle during a second-half timeout in a game against West Georgia Saturday at The Complex.

Mary Ann Miller | Special to the TimesValdosta State guard Jacolbey Owens (1) tries to get to the basket during a game against West Georgia Saturday at The Complex.

No. 16 Valdosta State men's basketball split with West Georgia over the weekend, losing 87-79 last Friday before shaking some things up and exacting revenge 71-61 on Saturday.

With the win, the Blazers improved to 9-3 on the season and snapped a three-game home losing streak.

The Blazers hit the road to face the third-place team in the Gulf South Conference East Division, the Montevallo Falcons on Friday.

The Blazers knocked off the Wolves Saturday despite shooting a season-worst 36.8% from the floor and tied their second-worst 3-point shooting performance (7-of-25).

With their shooting touch abandoning them over the weekend, the Blazers won by winning in several key stats –– particularly, rebounding, second chance points and bench scoring.

On Saturday, the Blazers got whatever they wanted on the backboards, winning that category 56-35. The plus-21 rebounding differential was a season-high, the most the Blazers have separated themselves on the glass since Jan. 3 at Auburn Montgomery.

The Blazers outscored the Wolves 34-7 in second chance points over the weekend and got it done off the bench 51-21.

After the team's disheartening loss to the Wolves last Friday, Fofana played a season-high 27 minutes and justified the uptick in minutes with all-out effort –– diving for loose balls, battling inside for rebounds and showcasing his offensive versatility.

The team badly needed someone to be a tone-setter and Fofana was happy to be that guy.

“It just felt good –– just playing hard,” Fofana said of his breakout game. “It starts with the hustle plays. I started with an offensive rebound and just being there for my teammates and that just gets you going. It gets the whole team going, which is what we want. ... It’s good for confidence and for me to develop my game and things, but we have a lot of players on our team. We’re very versatile and we can have anybody score on a given night. Anybody can step up and I’m just glad that I was able to help my team win this game.”

SHAKE-UP TO WAKE UP?

Friday's loss to the Wolves seemed to serve as a bit of a wake-up call for the Blazers. Defensively, they allowed the Wolves to shoot 12-of-20 from 3 and almost 51 percent from the floor overall.

“I don’t want to get too deep into why or who or whatever –– I just wanted to go with those five,” Blazers head coach Mike Helfer said of the player swap. “Those were the five that I thought were the right five for today.”

Owens responded well in his first start of the season with 13 points, a couple of rebounds and a couple of steals in 38 minutes. Gordon grabbed a season-high 10 rebounds along with six points and a block in 19 minutes as a starter. While he only played seven minutes, Hunt blocked two shots in short order.

Bianco, as he's shown throughout the year, will find a way to produce in any capacity –– delivering a nice all-around performance with eight points, seven rebounds (four offensive) and two steals in 22 minutes.

Something I found interesting was moving Hamilton to the bench. On Friday, Hamilton tied a season-low with two points on 1-of-8 shooting, missing all six of his 3-point attempts.

The next night, Hamilton played a season-low 16 minutes, scoring nine points on 4-of-13 shooting with five rebounds and two assists. Hamilton served as the team's sixth man last season, so the move to the bench isn't too foreign. The team obviously plays better and feeds off his energy when he's on, so it'll be interesting to see if the move to the bench is permanent or just a temporary thing.

Before Saturday's win, Jacolbey Owens had only attempted three 3-pointers in 10 games. Granted, he was 2-for-3 but the 6-foot-1 point guard has seemed reluctant to shoot from long range this season. Teams have picked up on that reluctance, daring him to shoot.

As I mentioned earlier, Owens scored 13 points on Saturday. He went 4-for-10 overall, but more importantly, he buried 3-of-4 from beyond the arc.

Owens plays a very patient game –– attacking when he has space, pulling up when the paint is clogged and using his quickness off the dribble to get into the paint and kicking out to shooters. Through 11 games, Owens leads all guards on the team in field goal percentage at 58.9%. He takes great shots and makes them at a high clip. If he shoots the 3 the way he did Saturday, it will be a major boon for the Blazers' offense.

WHO ARE THE FALCONS?

The Blazers are playing the Montevallo Falcons for the first time this season after having their first matchup Dec. 16 postponed due to COVID-19 concerns.

The Falcons have played just four games this season, winning three of them. Most recently, Montevallo lost to Auburn Montgomery 89-75 on Jan. 30.

Junior guard James McNeil leads the team in scoring at 14.3 points per game. Senior Xavier Malcolm averages 14 points per game and serves as the team's leading 3-point shooter with 13 made triples while 6-foot-1 junior Travarus Carroll averages 13.5 points and 7.5 rebounds on the season.

Rust may play a factor this weekend. The Falcons defeated West Georgia 75-72 in their season opener back on Dec. 9, then had their next eight games postponed due to COVID-19.

The Falcons have wins over West Florida and Auburn Montgomery –– teams with a combined record of 6-10 this season.