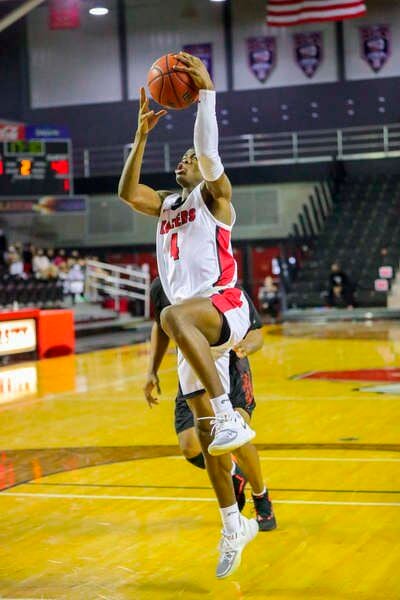 Mary Ann Miller | Special to the TimesValdosta State guard Ricky Brown (4) lays the ball in during the second half against Auburn Montgomery Saturday at The Complex. 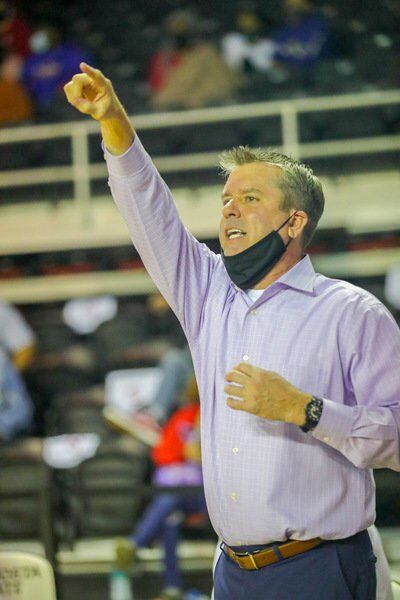 Mary Ann Miller | Special to the TimesValdosta State head coach Mike Helfer shouts instructions from the sideline during a game against Auburn Montgomery Saturday at The Complex. 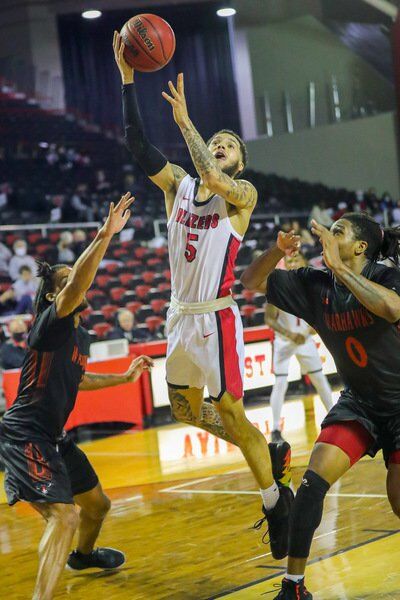 Mary Ann Miller | Special to the TimesValdosta State guard Burke Putnam (5) lays the ball in between two Auburn Montgomery defenders during a game Saturday at The Complex. Putnam finished with 19 points, eight rebounds and seven assists in the Blazers' 101-84 victory. 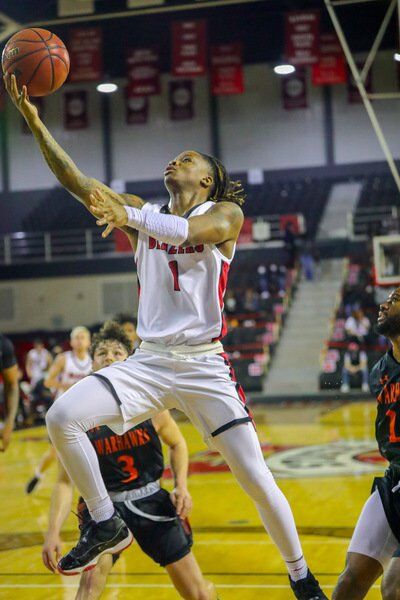 Mary Ann Miller | Special to the TimesValdosta State guard Jacolbey Owens (1) lays the ball in for two of his 12 first-half points against Auburn Montgomery Saturday at The Complex.

Mary Ann Miller | Special to the TimesValdosta State guard Ricky Brown (4) lays the ball in during the second half against Auburn Montgomery Saturday at The Complex.

Mary Ann Miller | Special to the TimesValdosta State head coach Mike Helfer shouts instructions from the sideline during a game against Auburn Montgomery Saturday at The Complex.

Mary Ann Miller | Special to the TimesValdosta State guard Burke Putnam (5) lays the ball in between two Auburn Montgomery defenders during a game Saturday at The Complex. Putnam finished with 19 points, eight rebounds and seven assists in the Blazers' 101-84 victory.

Mary Ann Miller | Special to the TimesValdosta State guard Jacolbey Owens (1) lays the ball in for two of his 12 first-half points against Auburn Montgomery Saturday at The Complex.

No. 25 Valdosta State men's basketball picked up two more victories against Auburn Montgomery over the weekend, improving to 12-4 on the season.

With more than a week off before the Blazers wrap the regular season at West Florida, let's run the floor.

True freshman Ricky Brown had his coming out party against the Warhawks on Saturday.

Brown, a hometown talent from Valdosta High School, scored a season-high 21 points on 8-of-9 shooting in 24 minutes off the bench. The freshman known affectionately as "Downtown" Ricky Brown made his first eight shots and didn't miss any of the five 3s he took in the game.

“It felt great,” Brown said of his breakout performance. “My teammates came together. We played as a family, played as one unit and it showed on the scoreboard. We played great.”

Freshmen don't usually get a lot of burn, but Brown has made it hard for Helfer to keep him on the bench. Brown doesn't do a whole lot wrong when he's on the floor –– he rarely forces shots, he only has 10 turnovers in the 129 minutes he's played this season and he's a long, active and heady defender.

Without starting shooting guard Imoras Agee and do-it-all swingman Travis Bianco over the weekend, Brown along with fellow freshman Jeremy Golson stepped into the minutes void with confidence. The duo changed Saturday's game with their shotmaking, combining for 30 of the Blazers' 37 points off the bench and hitting eight 3s between them.

The only thing cooling Brown off on Saturday was his teammates dousing him with water bottles in the locker room after the game.

"We took great advantage of the opportunity," Brown said. "Agee and Trav are great players, so we're trying to take the role of playing their minutes the best that we could and it came out great. We're just ready for them to come back and we'll get back on the boat."

On Tuesday, Brown was named Gulf South Conference East Division Freshman of the Week –– the second time he's garnered the honor this season.

In his 16th season as VSU head coach and his 24th overall, Blazers coach Mike Helfer now has 501 career victories.

At Valdosta State, Helfer has won 315 games and counting over 16 seasons. Under Helfer, the Blazers have won six GSC regular season titles, including the last four in a row.

Most impressively, the Blazers have been nearly unbeatable at home –– posting a record of 192-44 in The Complex, an 81.3% win percentage.

Helfer reacted to the 500-win milestone on Twitter on Sunday:

"Thank you for all the texts and calls over the weekend for win #500.  You don’t win in any sport without great players and great coaches - and I’ve been blessed to have had many at SPSU and VSU!  This is truly a team accomplishment in every manner ... 24 teams = 24 yrs = 500 W’s!"

The Blazers scored a season-high 101 points against the Warhawks on Saturday, looking as good as they've looked offensively all season.

The team shot a season-best 54.5% from the floor and went 13-for-29 from 3-point range for their third-highest percentage of the season (44.8%). Speaking of 3s, it was the eighth time the Blazers have made 10 or more triples in a game this season.

Against the Warhawks, the Blazers found a weakness to exploit in the Warhawks' defense: Guarding ball screens.

The Blazers picked the Warhawks apart using a pick-and-roll set known as "Twist". In "Twist, the screener sprints to set a screen on the ball-handler's defender, but at the last minute, the screener flips the direction of the screen. The last-second change of direction confused the Warhawks and allowed hard drivers like Jacolbey Owens and Burke Putnam to live in the lane.

From there, Owens and Putnam could do one of three things: 1) Score at the rim, 2) Collapse the defense and kick out to open shooters, or 3) Find finishers Maurice Gordon, Jakari Gallon or Mohamed Fofana lurking in the short corner on either side of the rim for easy baskets.

With the screen action working to perfection, Owens and Putnam combined for 38 points and 13 assists in Saturday's win. The Blazers hit nine of their 13 triples in the first half, then earned 15 free throw attempts in the second half with 13 makes.

“The problem teams have when we do that is that our guards are so explosive with the dribble,” Helfer explained. “If you just hesitate for a second on how you switch it or how you get over and hedge it, our guards are by you and now you’re scrambling because we have shooters out on the perimeter. That’s kind of what we saw and we took advantage of it.”

The Blazers don't play again until Feb. 26 when they travel to Pensacola to take on rival West Florida to end the regular season.

The break comes at a good time for the Blazers with the injuries to Agee and Bianco having kept them out the last two games.

Agee, the team's leading scorer and rebounder, is also one of the team's top defenders. Bianco has established himself as a Swiss Army knife of sorts, being able to play any position from shooting guard and small forward in traditional lineups to power forward and center in small-ball alignments. Together, that's 24 points and 10.5 rebounds missing from the lineup. Having those players back at full strength, along with the emergence of Brown as a real contributor off the bench, could put the Blazers in a prime position to do damage with the postseason just around the bend.

A LOOK AT THE GSC

With teams broken up into divisions, we've been robbed of some of the Blazers' traditional rivalry games with Alabama-Huntsville, Delta State and West Alabama. While the GSC Tournament format is still yet to be determined, if these teams are able to collide in the postseason, we could still get some of those marquee matchups with the stakes at their highest.