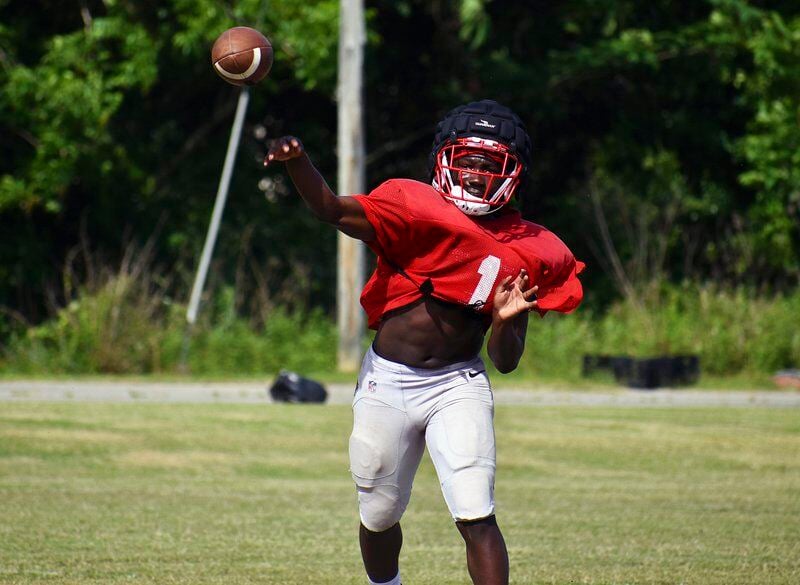 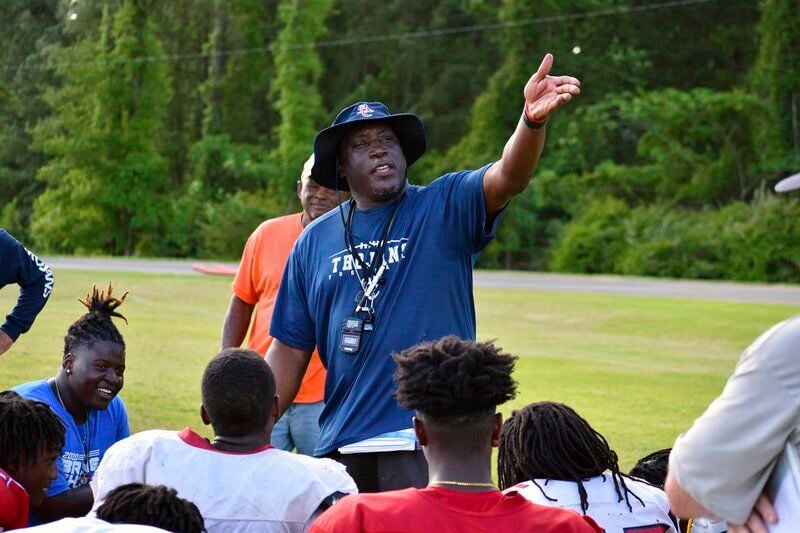 Gerald Thomas III | Special to the TimesBrooks County head football coach Maurice Freeman speaks to his team at the conclusion of spring practice Monday in Quitman.

Gerald Thomas III | Special to the TimesBrooks County head football coach Maurice Freeman speaks to his team at the conclusion of spring practice Monday in Quitman.

QUITMAN –– The 2021 Brooks County Trojans football season is in motion.

On Monday, they began spring practice to prep for the upcoming season.

This comes a year after spring activities getting cancelled in light of the beginning stages of the COVID-19 pandemic which would put the 2020 season in jeopardy.

But the Trojans would still go 13-2 and reach the Class A State title, falling 21-13 to Irwin County.

With the Trojans playing 15 games by reaching two consecutive championship games and going 23-7 over the last two seasons, head coach Maurice Freeman was ecstatic to have a spring circuit heading into his 28th year coaching.

“Man, I’m so happy. We’re out here on this grass in this great weather having a good time,” an animated Freeman said after practice. “With the pandemic, we didn’t know if we were going to have a season. These kids are working hard. I love being around them and they are even excited. You can’t beat that.”

The Trojans have six returning offensive starters and five on the defending end.

But they still have their 3-star running back and two-time top 10 Georgia high school rusher in senior Omari Arnold who is currently sitting on 11 Division I offers including Georgia Tech, Kent State, and Tulane.

“It feels good to come out here because we’re seniors now and we actually have to lead. I can’t just lead by example, I have to be vocal,” Arnold said. “The people that are getting new positions get to actually work at it instead of just starting in the season.”

Junior quarterback Jamal Sanders will now be under center this season with senior Willie Brown being his top receiving target.

Sanders got reps at quarterback during their 2020 state championship game when Burrus left the game for a few plays with a knee injury but primarily played a hybrid of running back and receiver last season.

“I’ve been working on it during the offseason by going to park to throw to receivers,” Sanders said after practice. “Tay (Burrus) gave me some great advice. He told me to never overwork myself. I hope to accomplish us getting a ring. That’s the only thing I’m worried about.”

He secured 51 tackles and six sacks a season ago and played on the offensive line, getting six pancake blocks.

“Any time you have experience, you have a leg up,” Freeman said. “We have some experienced receivers, Jamal Sanders has had snaps at quarterback, and we have one of the best running backs in this area coming back. Even our young kids know how to fly to ball on defense. It is nothing like senior leadership and players with experience. You can’t beat playing 15 games two years in a row when a lot of teams play 10.”

The Trojans will head to Douglas May 14 to face the Class 5A Coffee High School Trojans to begin their road for hopefully another state title appearance and victory this time.

“In my staff meeting, I asked my coaches what do our players need to do for us to win 15 and win No. 15 and they gave me a list,” Freeman said. “And then I said what do we need to do to get to game 15 and win it, and we created a list. We must block, tackle, and get our second team players to get ready to play early. We lost at the end because we had injuries and the second guy was not as ready as we wanted. So, in case of emergency, our second group will be ready to play and click on all cylinders.”