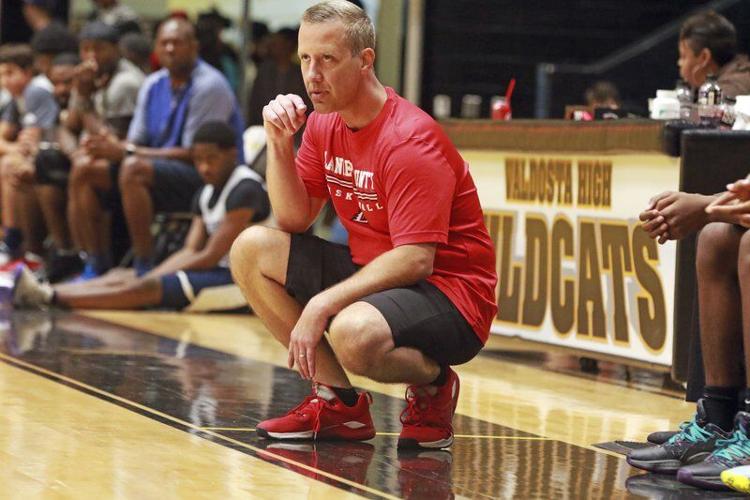 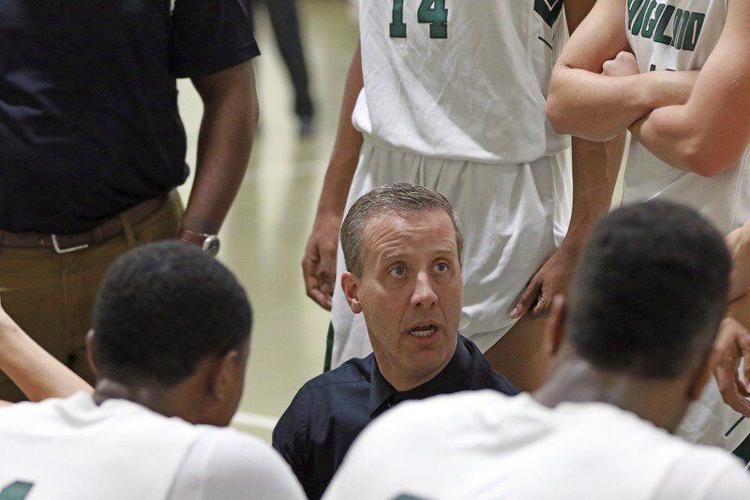 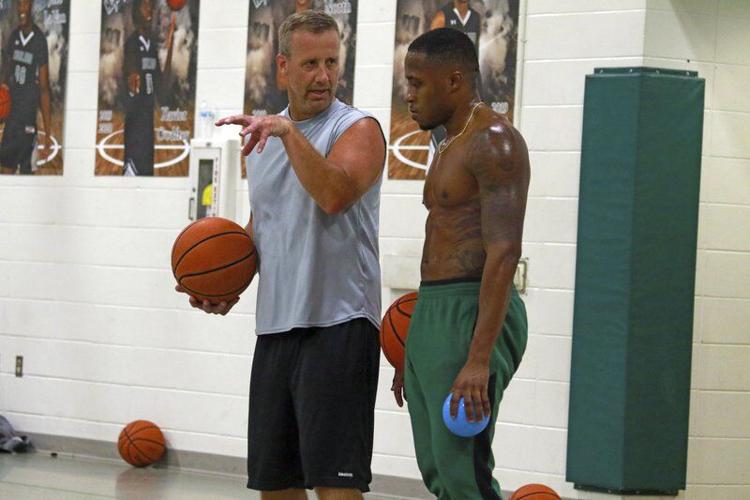 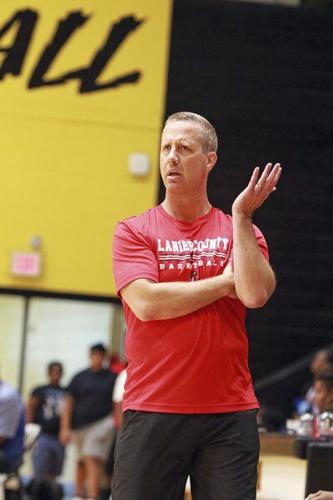 HAHIRA – Why did the basketball coach cross the road? To lead another program to prominence.

A stone’s throw from his driveway, Dr. Joel Stites agreed to become the new head basketball coach at Valwood May 26.

Stites, who won 168 games and a state championship at Highland Christian Academy, comes to Valwood after two years at Lanier County High School in Lakeland. The Ohio native went 37-10 with the Bulldogs, including a 24-4 record in region play with two state playoff runs to boot.

Though he added to Lanier’s rich basketball tradition in two short years, Stites said things just did not click the way he wanted them to in Lakeland.

“Lanier was fun. It was a challenge,” Stites said. “We did well. We went 16-7 and got to the Sweet Sixteen in our first season and last year, we were 21-3. I think we would’ve went a ways but we had some untimely illnesses and some things that just got us at the end of the season that kind of took away an opportunity to maybe make a deep run.

“It was an experience. I just didn’t love it. It was missing a few things. My vision and maybe a couple folks at the administrative level at the high school just didn’t align and then I was contacted through some folks at Valwood that they were looking to possibly make a change and I sat down with them and here I am. ... It was a blessing to have it fall in my lap and I’m excited about the opportunity.”

Taking the reins from longtime coach Andy Stamschror, Stites takes over a Valwood program that has seen some of its luster fade in recent years.

“I’ve known Joel for a long time; since he started coaching at Highland. I know the work he did at Highland and I know what he’s done at Lanier,” Valwood Athletic Director Brett Martin said. “He’s the kind of guy we want to step in to continue the good work that Coach Stamschror did. He’s had a good program that we feel like is just on the cusp of becoming a great program and when Coach Stamschror decided to step down, I went to look for the best possible person I could get to head that program and that was Coach Stites.

“I believe in his philosophy. I believe in what he does at practice. I like the way he manages games and I like the way he bonds with the kids and really tries to guide them through not just basketball-wise but in terms of becoming better young men as well. We’re very lucky to have Coach Stites.”

During his time at Highland and Lanier, Stites built the reputation of being a gym rat – hosting countless days of summer workouts, open gyms and skill development sessions for his players.

That reputation resonated with Martin, who has overseen several of his programs compete for state championships at Valwood.

“Part of the attraction is the fact that he wants that gym to be open all the time and he wants kids to be in it all the time,” Martin said. “He doesn’t just demand that they work hard or that they buy into his system, he also gives them the opportunity to come out just about every night of the week and get better. He’s that kind of guy. He lives right across the street from Valwood and he works right down the road from Valwood. The pieces just all fell together in the right place.”

Not only does Martin envision success for Stites with the Valiants, he sees Stites building a program that can sustain itself by strengthening its roots at the elementary and middle school levels.

“I told him when we sat down, what I’m looking for is somebody that’s not just going to come in and be the varsity coach but is going to have their hand in from the bottom up,” Martin said. “We want the fifth- and sixth-grade kids and the seventh- and eighth-grade kids doing his stuff. We want them not just running his plays but warming up like he warms up, using the same terminology, playing the game like he wants to play and he’s going to make sure that the coaches on those levels are doing that so the programs feed into the high school program – which is what they’re supposed to do.

“We had a big senior class last year. We lost a lot of players, so it’s going to be a rebuilding time anyway. We’ve got a really good group of middle school kids coming up that are going to be playing varsity next year. A lot of them saw some minutes this year. I think he’s the guy that can take that and do what we need to.”

When he interviewed for the Valwood coaching position, Stites admits he was “definitely a little leery” due to the team’s mediocre records recently. However, his conversation with Martin quickly dissipated any trepidation.

“I can’t tell you how well of a conversation we had initially,” Stites said. “I was a little concerned about what the current status of the basketball program was, how important it was and he sat down and really just sold me on Valwood as a whole, Valwood as a program, Valwood as a basketball program and how he really wanted to ramp it up. They’ve been successful in other sports recently and he wants to have basketball to get to the next level.”

Stites said he won’t have to do much selling of Valwood to prospective students, adding, “The beautiful thing about Valwood is it’s Valwood. It sells itself, which is wonderful.”

The playing floor in Eager Sports Center is in the process of a facelift and will be ready to play in the coming weeks.

“Our floor is going to look like Valdosta State’s by the time it’s done in a couple of weeks,” Stites said. “My vision is getting the kids in there that want to be in there and teach, build a culture that’s proud of basketball and a group of kids that are willing to work hard and see where that takes them. Be in there and be relentless, be driven, be passionate; those are the things I’ve always done and we’ll continue to do.

“If we can get these kids in the gym and teaching the fundamentals and how to be a basketball player, how to be a student-athlete, how to possibly go to the next level – and we’ve had success with that – I’m hoping those things will create a buzz for Valwood basketball. Not just now, but in the future.”

Though it’s still very early into his tenure, Stites said he already likes the resources he’ll have at his disposal during the summer and into the fall – citing the team’s training and weight room facilities as “probably the best I’ve had.”

More than the facilities on campus, Stites has felt warmly welcomed by many in the community, not only from Valwood supporters but people that know him in the community.

“I just got my feet on the ground but I’ve had an incredible amount of people contacting me, reaching out and just telling me how excited they are to have me back in Valdosta. There’s been a lot of really good, positive support from the Valwood folks and folks in Valdosta in general, to have me back in town coaching. It never hurts to have someone tell you they’re excited to have you.”

About three weeks from the first day of summer, Stites’ work has only just begun.

So far, Stites said he’s already met 13 boys and hosted a workout; the first of many before the season tips off in the fall.

“I think we can really build a program that sustains itself and other programs look to for direction so to speak,” Stites said. “Those things are all part of my vision but you’ve got to have the kids that are willing to put in the work. I’ve never found a kid that goes in the gym and gets worse.”

As Stites is quick to point out, at both stops, he’s won.

He built the Highland Christian hoops program from the ground up and eventually molded the Eagles into a private school powerhouse that made seven Sweet Sixteen appearances and two Final Fours. He understands what it feels like to wear the bullseye on his back.

Now at Valwood, Stites welcomes a slightly different challenge with the same competitive fire and thirst for success he had at his previous stops.

“It’s interesting. We were the hunted at Lanier the last couple years. I don’t think there was a week we were out of the Top 10 in the two years I was there. I don’t know if we were always deserving of it, but nonetheless, four teams in our region last year including us were in the Top 10,” Stites said. “We played a tough, tough schedule. With that being said, we’ve got to figure out a way to weather the storm, no matter what conference you’re in. It’ll be different. It may take a bit of time and some teaching and some growing pains but I’ve done it and now I’m doing it in a beautiful place with some really good people and some really good kids. They’re ready to learn. They’re excited and I don’t know if they’ve done a whole lot of skill training before, so they’re gonna get it now for sure.”