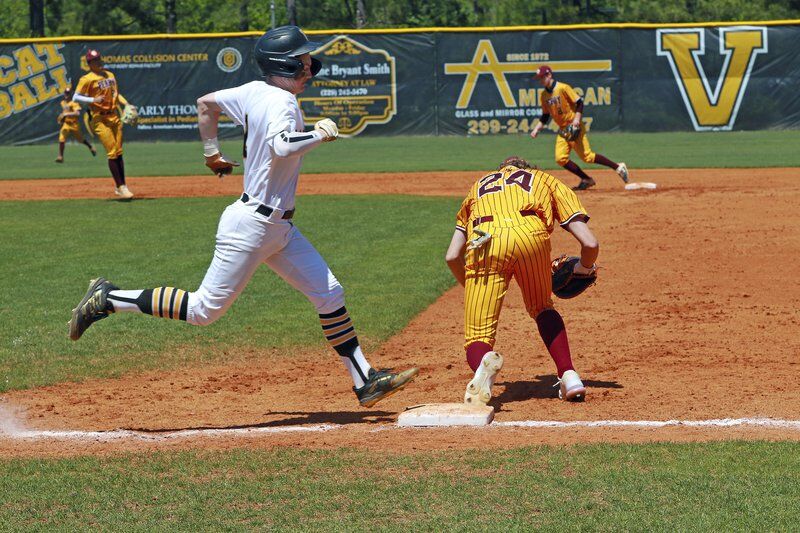 Shane Thomas | The Valdosta Daily TimesValdosta's Jordan Caraway is narrowly beaten out by a throw at first base during a game against Perry Saturday at Bazemore Field. 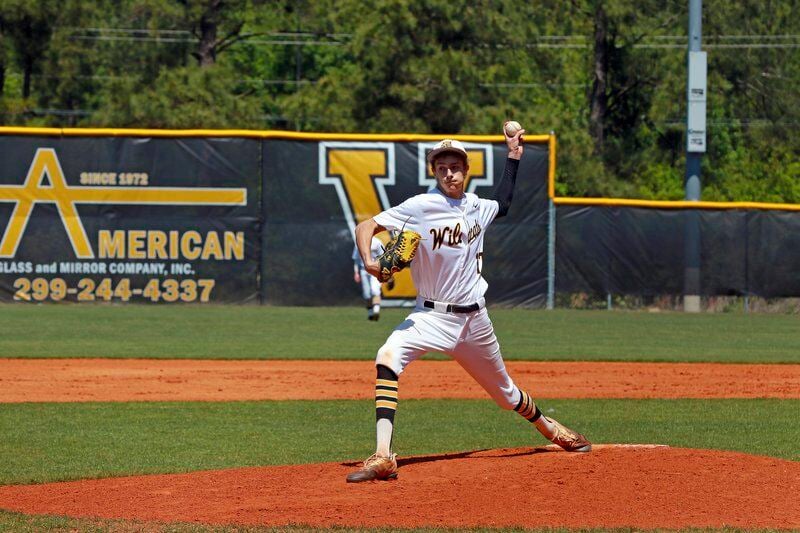 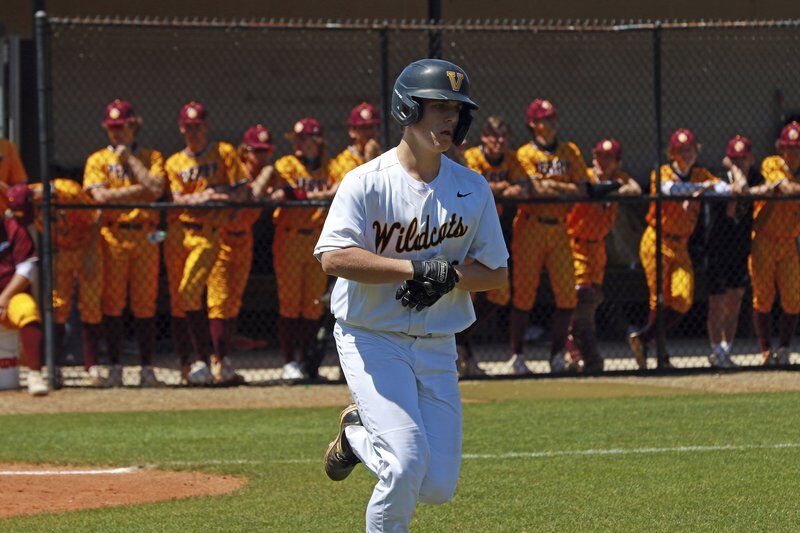 Shane Thomas | The Valdosta Daily TimesValdosta’s Max Newbern (11) trots to first base after drawing a walk during a game against Perry Saturday at Bazemore Field. 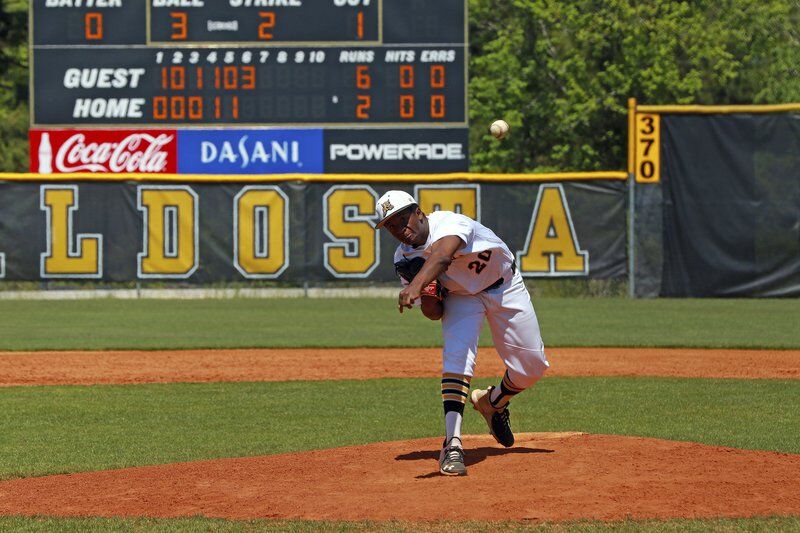 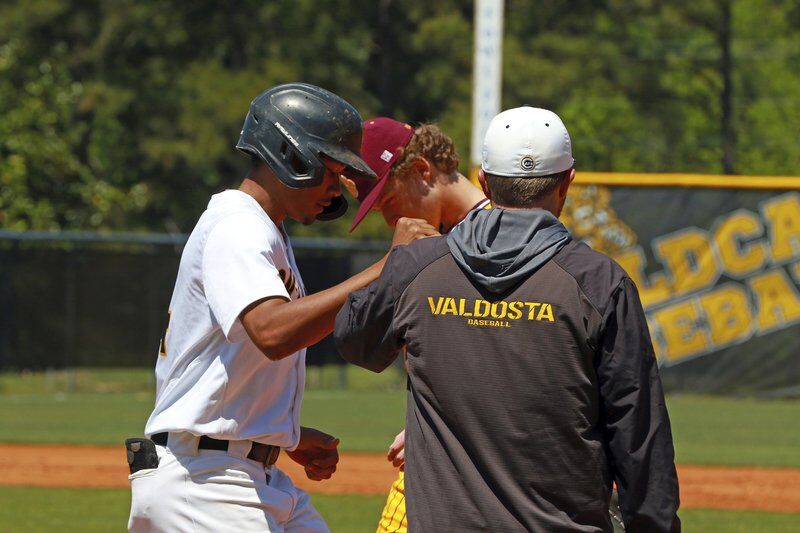 Shane Thomas | The Valdosta Daily TimesValdosta's Jordan Caraway is narrowly beaten out by a throw at first base during a game against Perry Saturday at Bazemore Field.

Shane Thomas | The Valdosta Daily TimesValdosta’s Max Newbern (11) trots to first base after drawing a walk during a game against Perry Saturday at Bazemore Field.

VALDOSTA –– After a dominating 15-2 region win against Northside on Friday, Valdosta High baseball couldn’t replicate its magic a day later.

The Wildcats fell behind early, then saw the Panthers pull away with a six-run sixth inning as they fell 9-2 Saturday.

The top of the sixth inning got off to an inauspicious start for the ‘Cats as second baseman Cole Porter and short stop J.D. Smith collided going for a fly ball by the Panthers’ Garrett Davis.

The collision allowed Davis to advance to second base before Panthers’ utility player Brayden Long delivered a bunt single to put two men on with no outs. On the next at-bat, Ethan Bearden connected on an RBI single to left to make it 4-2 in favor of the Panthers.

Perry had only just begun.

Following a base hit by short stop Tanner Knowles, outfielder Tristan Freis got a base hit that brought in another run for the Panthers. The run made it 5-2 and led to Valdosta head coach Brad Porter to pull starter William Richards, who allowed nine hits and eight runs (two earned) through five innings of work with two strikeouts and two walks.

Richards gave way to reliever Isaiah Haygood, who couldn’t quite stop the bleeding as Lane Rucker came through with an RBI to bring Bearden home to push the lead to 6-2. Haygood then walked Tyler Newhouse to load the bases.

Haygood struck out Carson Bryant, then hit Dylan Butler –– a controversial call as Haygood pitched Butler inside and didn’t appear to make contact. After a conference between umpires, the ruling instructed Butler to take first base, prompting Porter to come out of the dugout to get clarification.

From there, three more runs crossed home plate before the ‘Cats were able to pick off pinch runner Lane Smith between third and home to end the nightmarish inning.

“That’s the first time in a long time where we’ve had one of those innings where we didn’t stop the bleeding,” Porter said of the sixth inning. “(Perry) did a great job of putting some good two-strike pitches in play. They had some bloopers fall in and drop in. But ultimately, we didn’t make a couple plays that inning and because we didn’t make those plays, they’re a good baseball team and they took advantage of it.”

The ‘Cats also struggled in the field defensively, botching some routine fielding situations that put Panthers on base and eventually led to the lead swelling for the visitors.

In total, Valdosta finished with five errors in the loss.

The Panthers finished with 10 hits Saturday.

Smith and Elijah Guilliams combined for Valdosta’s only two hits in the game.

With the loss, Valdosta fell to 13-9 on the season while Perry improved to 16-2.

“We’ve just got to play with intensity,” Porter said when asked what the next step he wants to see his team take moving forward. “Today was an emotional letdown, right? A big region win (Friday) coming off two weeks where we just played great baseball. Today was a bit of an emotional letdown. The start of spring break and all of that stuff. Everything that can distract a kid is available to distract them today and we just didn’t play with a whole lot of focus today.

Valdosta visits Johns Creek on Thursday before playing Woodland in the second half of the non-region doubleheader. First pitch is scheduled for 4 p.m.