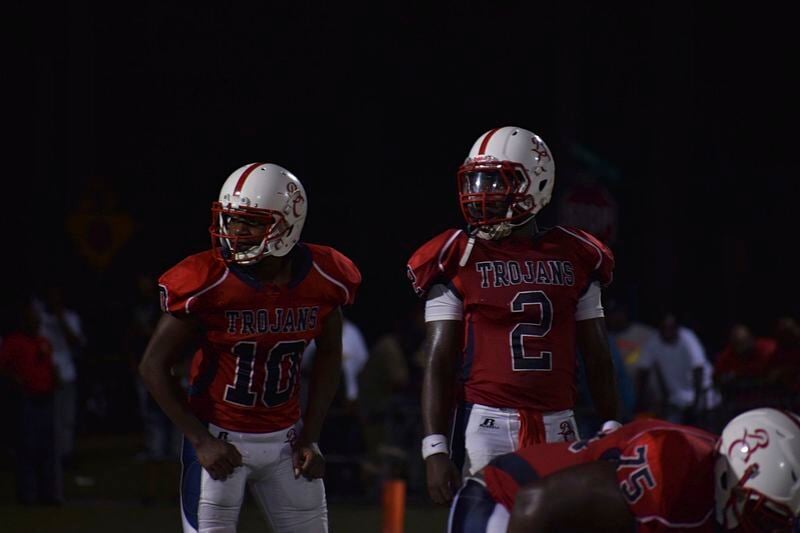 Gerald Thomas III | Special to the TimesOmari Arnold (10) and Nitavion Burrus (2) look towards the Brook's sideline during a 2019 game. 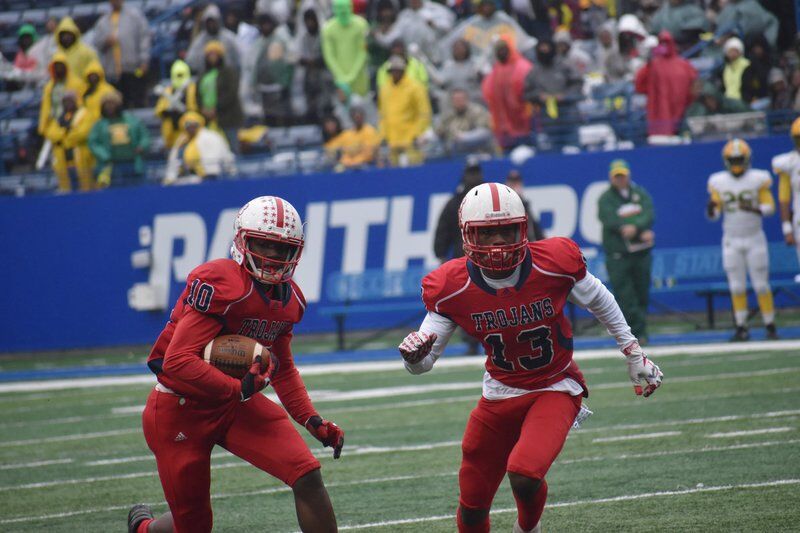 Gerald Thomas III | Special to the TimesBrooks County running back Omari Arnold carries the ball during the 2A state championship.

Gerald Thomas III | Special to the TimesOmari Arnold (10) and Nitavion Burrus (2) look towards the Brook's sideline during a 2019 game.

Gerald Thomas III | Special to the TimesBrooks County running back Omari Arnold carries the ball during the 2A state championship.

QUITMAN—As he entered his upperclassmen years, junior running back Omari Arnold has made his mark on the field for the Brooks County Trojans.

In his career, Arnold has posted 2,786 rushing yards and 31 touchdowns through three seasons for the Trojans.

This includes when he racked up 1,796 yards in the Trojans’ 10-5 season that included a Class AA State Championship appearance.

The 17-year old from Brooks County’s love for football began at a young age through family members mentoring him into his current state.

“I started playing football when I was real young,” Arnold said. “My uncle taught me everything that I know from then up into high school.”

Athletics keeps Arnold on a straight path as he is also a member of the Brooks County basketball team where he averages 7.5 points per game, 4.4 rebounds, and 1.5 steals throughout his career.

“When you’re involved in any sport, it makes you want to get your grades up, act right, and always come to school to get your education,” Arnold said.

Arnold, a normally quiet kid, is building up his qualities as a vocal leader being one of the older guys on the team now.

“I’m definitely getting more vocal and I’m trying to have more leadership because right now it’s not there yet,” he said at practice. “I should have even more leadership skills by next year.”

Trojans’ Head Coach Maurice Freeman said that when Arnold came into the program, it was at the point where the running back would not even talk to him or give input even though he was a starter since his freshman year.

“I’ve seen him go from not talking to me at all to having general conversations with me,” Freeman said. “He shows the eagerness to play various positions and speaks up to let us know how he is feeling and what he can do. When we think he is tired, now he will say, ‘Coach I’m ok, let me play.’ As a teammate he has matured, and we can hear him speaking up to his teammates and finally outgrowing not giving his opinion. He’s always been the right guy in the hallways, and we’re excited to see this young man grow.”

With Arnold’s college athletic interest warming up after he received an offer from Georgia Tech on Sept. 28, he is using the excitement he felt as motivation to get more looks but also acknowledging that he still wants to polish his game more.

“I found out at school,” Arnold said. “Coach Freeman called me in his office and showed me the text between him and the coach saying they were going to offer me. I called Coach (Tashard) Choice from Georgia Tech and he told me the offer was official and was telling me what I needed to work on. That was my first one, so I was excited.”

Wherever Arnold heads to college after he graduates in 2022, he hopes to major in Sports Medicine.

Years down the line, when Arnold’s football career is set and done on all levels, he will always remember the stern but helpful manner of Coach Freeman on and off the field.

“He doesn’t cut anybody slack,” Arnold said. “If something happens, he always going to want you to go on the field and do what you have to do. He’s always there to help you no matter what you’re going through.”