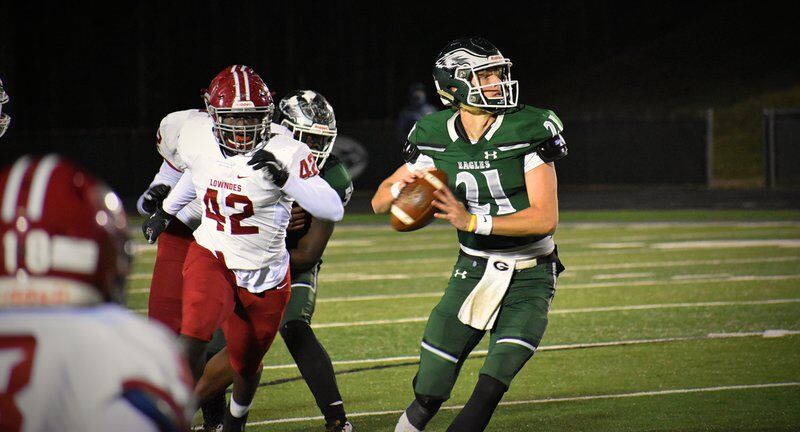 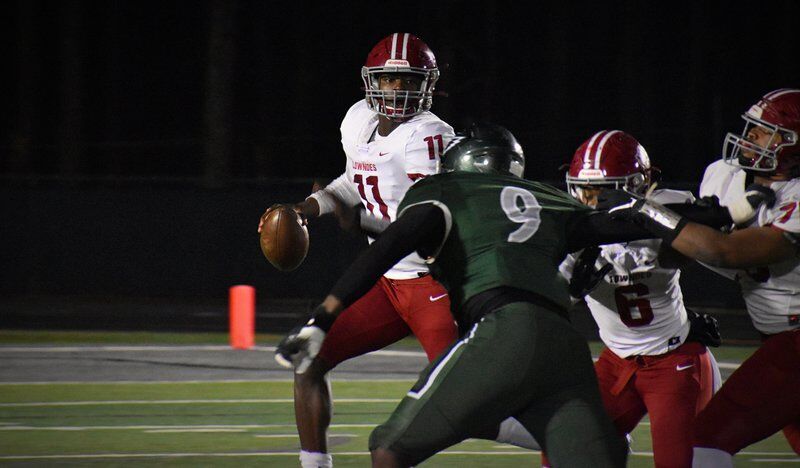 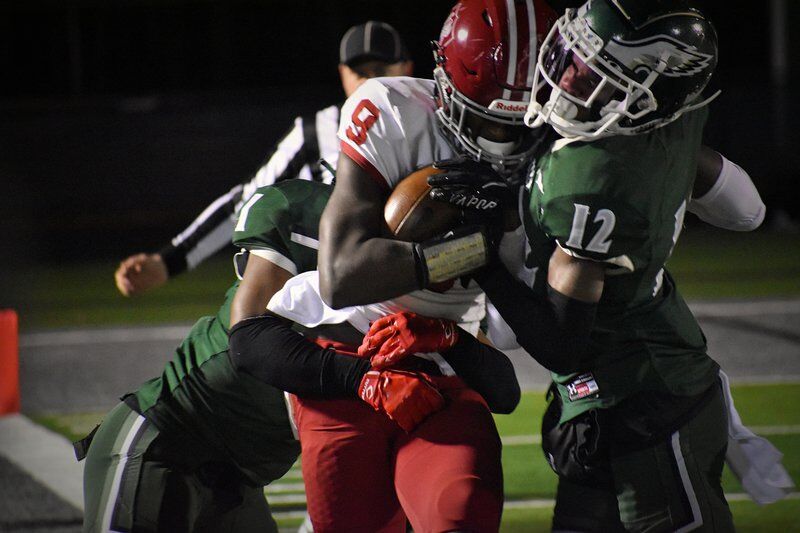 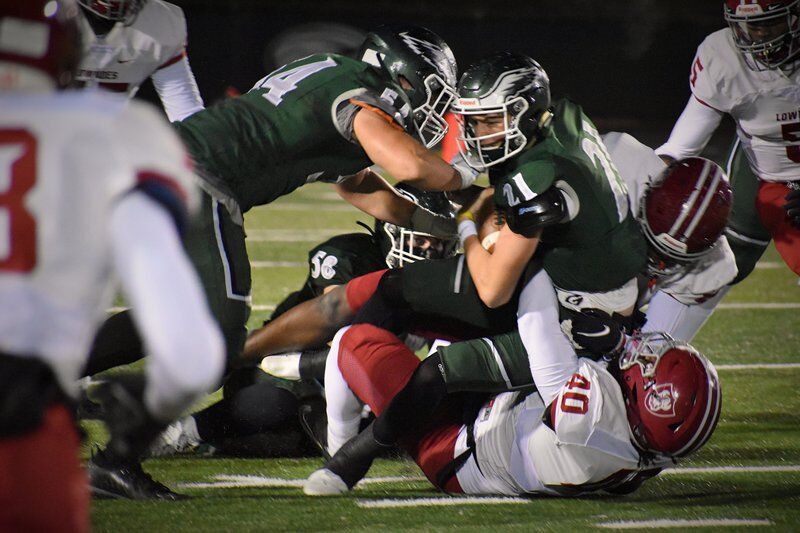 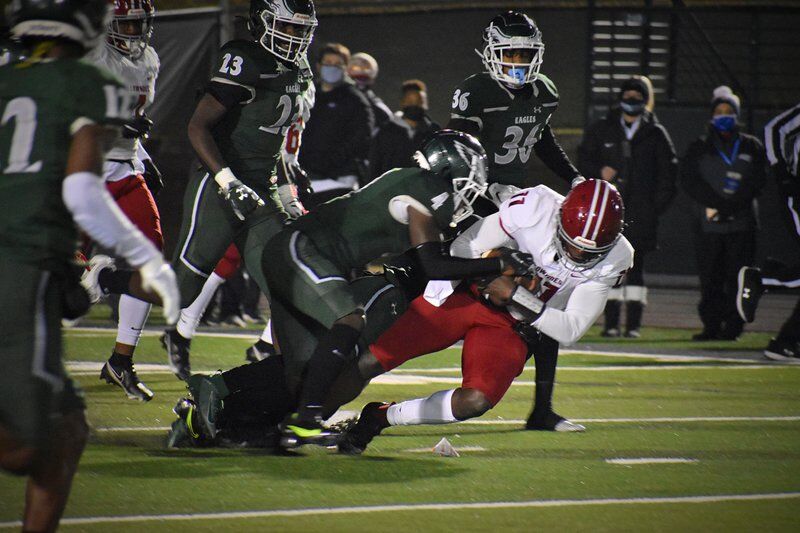 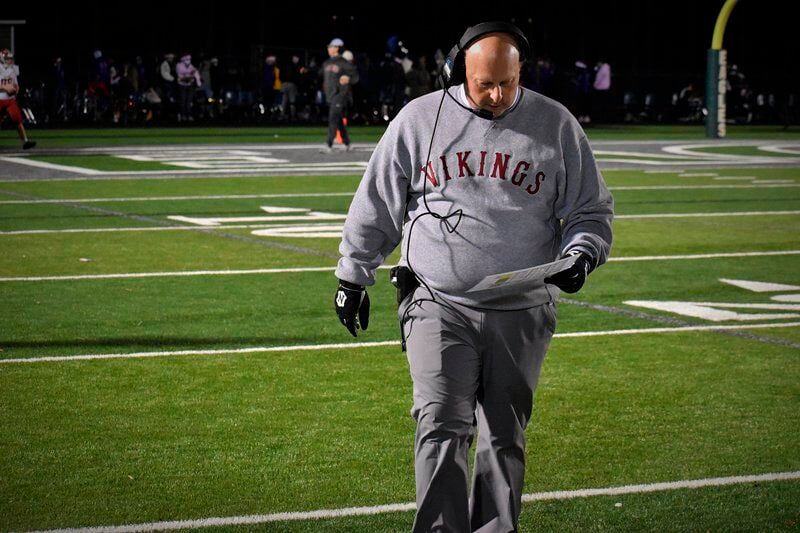 Gerald Thomas III | Special to the TimesLowndes head football coach Jamey DuBose looks at his playbook during a GHSA Class 7A semifinal game against Collins Hill Friday in Suwanee, Ga.

Gerald Thomas III | Special to the TimesLowndes head football coach Jamey DuBose looks at his playbook during a GHSA Class 7A semifinal game against Collins Hill Friday in Suwanee, Ga.

The No. 4 Lowndes Vikings season ended with a 31-14 semifinal loss to the No. 10 Collins Hill Eagles Friday night.

The passing game of Collins Hill led by 4-star pro-style junior quarterback Sam Horn proved to be too much for the Vikings as they could not take the ball out of the air.

The Vikings came out in the second half but still couldn’t get the ball moving, even being pushed back into a third-and-30 situation.

On the other side, the Eagles put together two consecutive scoring drives on Horn to Hunter passes for 33 and 45-yards that would grab them a 28-7 lead.

Jacurri Brown tried to give the Vikings the shock in the heart they needed, pulling a handoff and breaking from the pack to score a 43-yard touchdown to bring the Vikings’ deficit to 28-14.

The touchdown would be the final score for the Vikings’ 2020 season as they could not gain momentum and committed another turnover on a Brown interception in the fourth as Collins Hill milked the clock to clinch a Class 7A state championship berth against Grayson on Dec. 30.

“Collins Hill has an exceptional football team,” Vikings head coach Jamey DuBose said after the loss. “Their quarterback is a really good player, and they have some good playmakers outside. We never could get anything going and pressed a little bit late.”

In the second quarter, a Vikings’ turnover finally led to points as DeAunte Hunter jumped onto a Collins Hill fumble to get the ball back for the Vikings.

First, Brown and James connected for a big gain to get the Vikings into the red zone before the quarterback would rush in from a yard out to knot the game at 7 with 5:10 left in the first half.

Before the half ended, Collins Hill got into the end zone again following an interception by Jayden Harris to set his team up for a score.

With 47 seconds left until halftime, Horn completed a 9-yard pass to Sean Norris that went for an Eagles score to capture a 14-7 lead heading into the break.

At the onset, the Eagles received the ball first and scored in less than a minute and a half as they were rewarded yards after a late hit by DeAunte Hunter of Lowndes.

The drive ended with Horn finding his No. 1 target Travis Hunter for a 15-yard touchdown to grab a 7-0 lead with 10:37 left in the first quarter.

The Vikings got the ball but turned it over after a lob from Brown was intercepted by Justin Richardson as the quarterback intended to get the ball to Dominique Marshall.

Despite the turnover, the Vikings defense did not allow any points and got the ball back for the offense as Ramecia Burgman picked off Horn in the end zone.

Off the interception, the Viking offense couldn’t capitalize as it was forced three and out by the Eagles.

On the following drive by the Eagles, they attempted to go for a fourth down conversion but Tylar Belcher intercepted Horn and returned it to the 50 as the quarterback tried for a shot down the field.

The Vikings drove the ball down to the 15-yard line and attempted to for a fourth down on their own but Brown’s pass to Jaheim James fell incomplete.

DuBose’s first season at Lowndes ended at a 10-2 clip with a region runner-up title and semifinals appearance.

He commended his 34 seniors for helping him get through the year as they played their last high school game on Friday.

“I’m proud to be a part of the Lowndes family,” he said. “These guys taught me a lot this year. We have been there for each other all year. I am down on myself and hold myself accountable because I told them that we would get back to the state championship game and I feel like I let them down. Our seniors got us this far and the reason we were here tonight.”