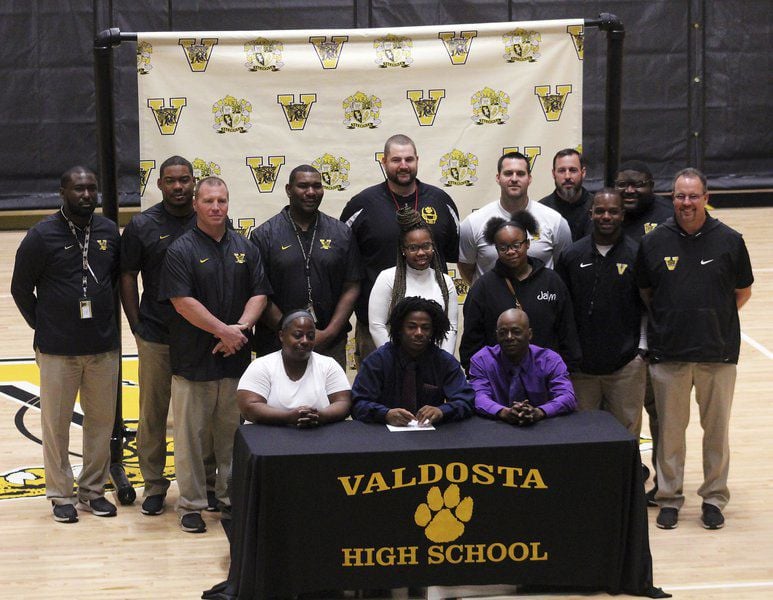 Juston Lewis | Special to the TimesValdosta defensive back Jacquez Brown and his family take a photo with the Valdosta High coaching staff during a National Signing Day event Wednesday at Valdosta High School. Brown signed a letter of intent to attend the University of the Cumberlands in Kentucky.

Juston Lewis | Special to the TimesValdosta defensive back Jacquez Brown and his family take a photo with the Valdosta High coaching staff during a National Signing Day event Wednesday at Valdosta High School. Brown signed a letter of intent to attend the University of the Cumberlands in Kentucky.

“It was one of the best years that we’ve had because we didn’t have any problems,” head coach Alan Rodemaker said of the senior class. “We had a lot of low-maintenance kids that came to work every day and worked hard. We probably weren’t as talented as we’ve been in years past but I think our kids played to the best of their abilities and got the most out of what they had to offer.”

The Wildcats went 8-5 with region wins over Houston, Coffee and Northside this year. The team made it to the third round of the GHSA 6A tournament before losing to Dacula. For nine Wildcats that chapter has closed and they’ve started their collegiate stories.

Wide receiver Devonta Berrian and defensive end Jarred Sermons signed with Union College in Kentucky. Twin brothers Jaxon and Justin Harrell signed with Lagrange College to play on the offensive line. Linebacker Desmond Johnson signed with Western Kentucky University while defensive back Jacquez Brown committed to the University of the Cumberlands in Kentucky.

The Wildcats senior running back duo of Rajae’z Mosley and Bazelais Saintvil will be staying in state for college.

Mosley will be attending the University of West Georgia in Carrolton while Saintvil will be going to Christian Community College in Atlanta. Saintvil took a moment out of the program to recognize the chance that he has in front of him.

“It’s my only opportunity at the moment and I’m going to take advantage of it,” Saintvil said during the ceremony.

Mosley acknowledged the Valdosta community and how it has helped him grow as a football player.

“It just shows how deep the football tradition is in Valdosta,” Mosley said. “It means a lot to me because I came from nothing. Not saying I was poor but with football I had no name. I was called undersized, I was small but over the years I was able to prove myself and come out on top in the state of Georgia.”