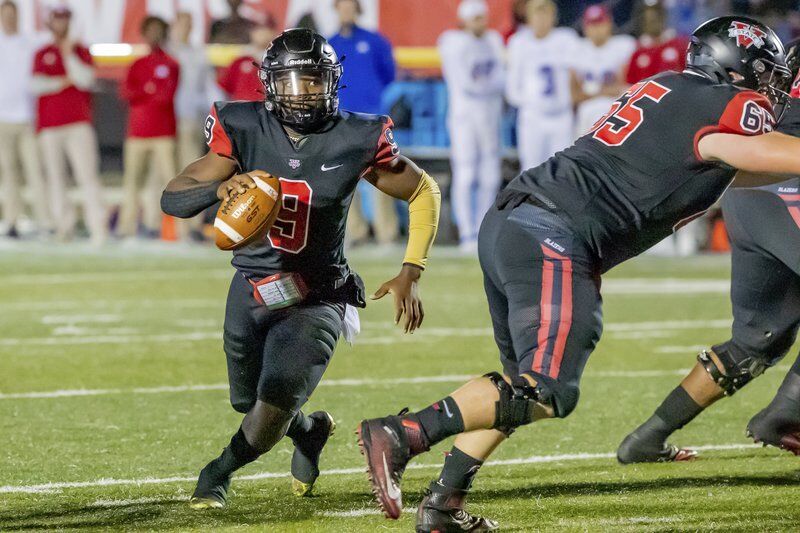 Mary Ann Miller | Special to the TimesValdosta State quarterback Ivory Durham (9) finds a hole on a carry during a Gulf South Conference game against West Georgia Saturday at Bazemore-Hyder Stadium. 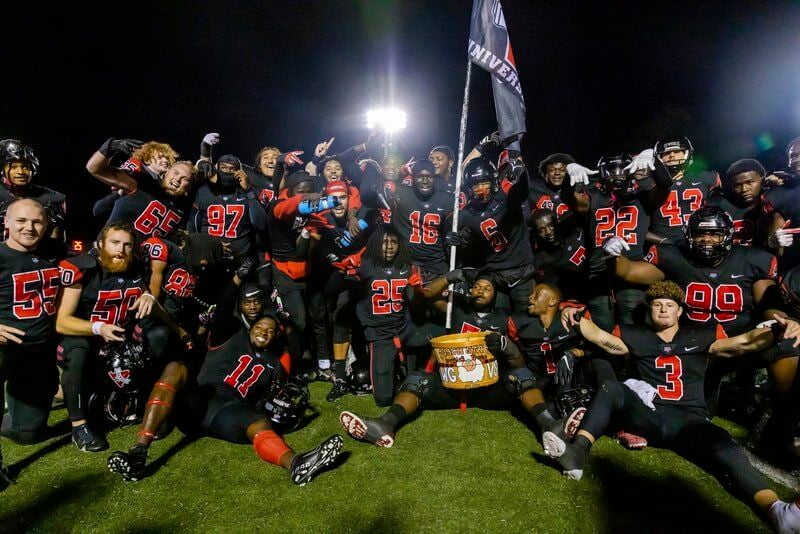 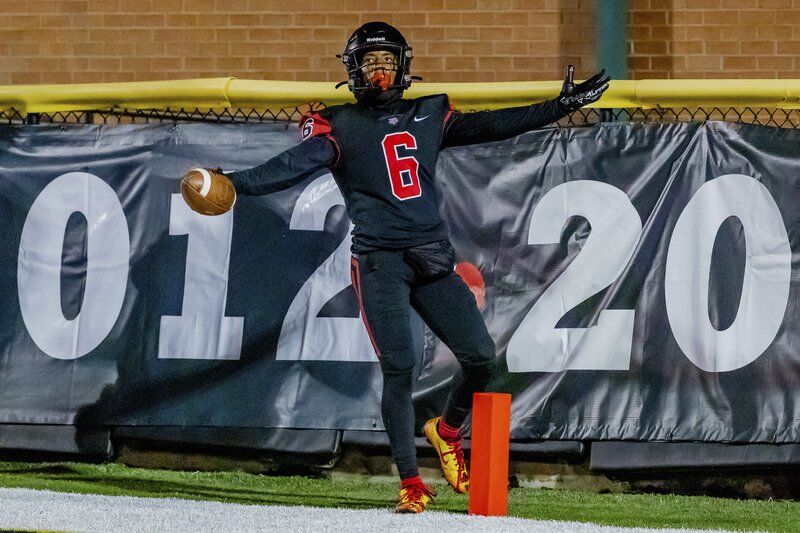 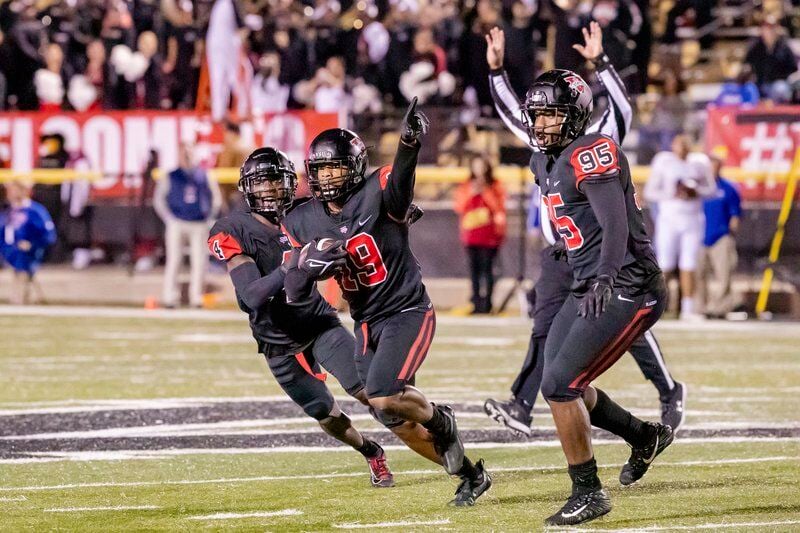 Mary Ann Miller | Special to the TimesValdosta State defensive back Cory Roberts (19) celebrates with teammates Taurus Dotson (4) and Eric Williams (95) after picking off a pass by West Georgia's Harrison Frost during a Gulf South Conference game Saturday at Bazemore-Hyder Stadium. 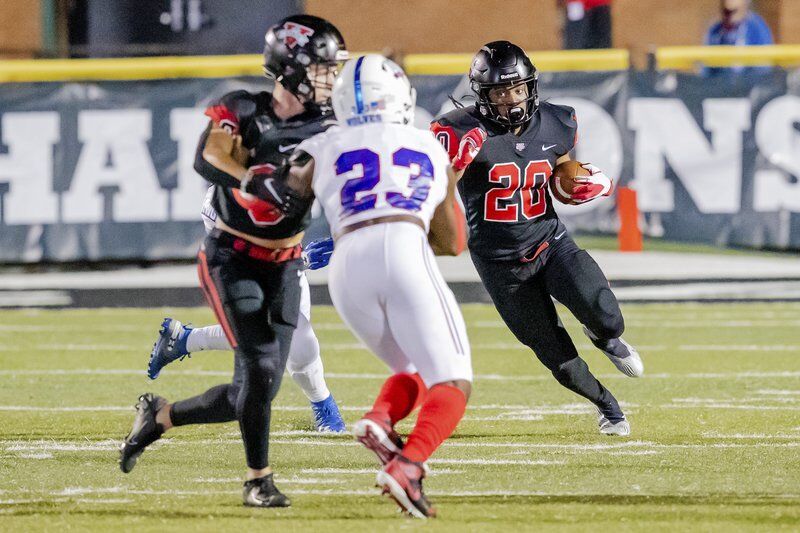 Mary Ann Miller | Special to the TimesValdosta State running back Jamar Thompkins (20) follows a block by wide receiver Brian Saunds (0) on a carry during a Gulf South Conference game against West Georgia Saturday at Bazemore-Hyder Stadium. Thompkins had 14 carries for 150 yards with one touchdown in VSU's 36-34 victory. 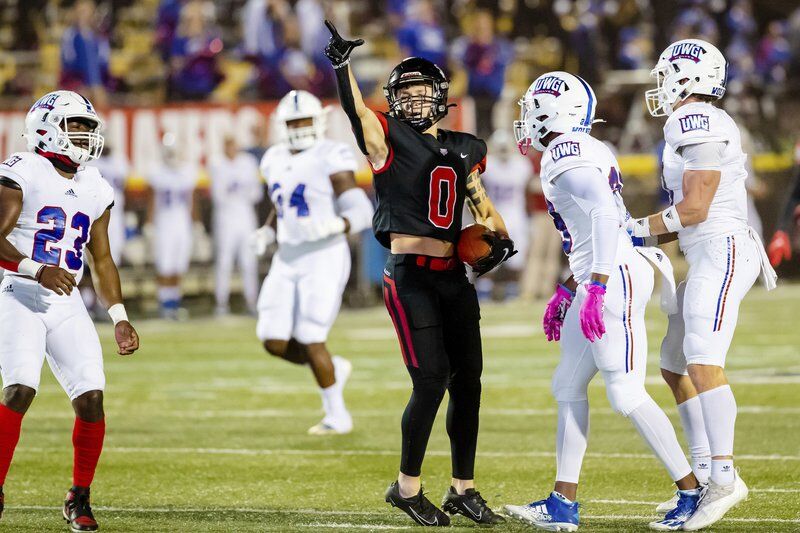 Mary Ann Miller | Special to the TimesValdosta State wide receiver Brian Saunds (0) points downfield after making a catch for a first down during a Gulf South Conference game against West Georgia Saturday at Bazemore-Hyder Stadium. Saunds had a team-high seven catches for 96 yards in VSU's 36-34 victory.

Mary Ann Miller | Special to the TimesValdosta State quarterback Ivory Durham (9) finds a hole on a carry during a Gulf South Conference game against West Georgia Saturday at Bazemore-Hyder Stadium.

Mary Ann Miller | Special to the TimesValdosta State defensive back Cory Roberts (19) celebrates with teammates Taurus Dotson (4) and Eric Williams (95) after picking off a pass by West Georgia's Harrison Frost during a Gulf South Conference game Saturday at Bazemore-Hyder Stadium.

Mary Ann Miller | Special to the TimesValdosta State running back Jamar Thompkins (20) follows a block by wide receiver Brian Saunds (0) on a carry during a Gulf South Conference game against West Georgia Saturday at Bazemore-Hyder Stadium. Thompkins had 14 carries for 150 yards with one touchdown in VSU's 36-34 victory.

Mary Ann Miller | Special to the TimesValdosta State wide receiver Brian Saunds (0) points downfield after making a catch for a first down during a Gulf South Conference game against West Georgia Saturday at Bazemore-Hyder Stadium. Saunds had a team-high seven catches for 96 yards in VSU's 36-34 victory.

VALDOSTA – The Peach Basket remained in TitleTown as No. 2 Valdosta State escaped with a 36-34 win over No. 3 West Georgia Saturday night.

For three-and-a-half quarters, the Blazers (8-0, 5-0 Gulf South Conference) looked well on their way to another blowout of a top-ranked team as they jumped out to a 33-13 lead on a 63-yard touchdown run by Jamar Thompkins with 10:39 left in the third quarter.

The Wolves were not about to go out like that against their biggest rival.

Dragging the Blazers on a 10-play, 75-yard drive, the Wolves found the end zone on a 5-yard pass from quarterback Harrison Frost to Mechane Slade to make it 33-20 with 5:40 left in the third.

Two minutes and 40 seconds later, the Wolves made things interesting as they forced the Blazers to punt. The ball bounced away from an incoming VSU defender tackling path as the Wolves' Quan Harrison scooped up the punt and rolled 78 yards to the house to cut the 20-point deficit to six with 3 minutes left in the quarter.

"We've overcome a lot of adversity," VSU head coach Gary Goff said. "We've played some backups here and there. We have not played with our entire starters since the second game of the season. The first half was great, the second half we still made some mistakes. The biggest one was the scoop punt return that got them back in the game and gave them all the momentum right there, but I'm extremely proud of how these guys finished the game and hung in there and didn't panic. We knew this was going to be a dog fight. We knew we were facing a really, really talented West Georgia team, so I'm on Cloud 9 right now. I just care about the win."

On the next VSU drive, the Wolves denied the Blazers a chance to widen the margin – forcing a 20-yard field goal by kicker Estin Thiele that pushed the VSU lead to 36-27 with 11:28 to go in the game.

Like they did in the third quarter, the Wolves kept the Blazers' offense off the field for what felt like an eternity in the cold south Georgia night. The Wolves ground down the Black Swarm with a 17-play, 94-yard drive culminating in a 9-yard hookup from Frost to Jace Jordan to cut the lead to 36-34 with 3:09 to play.

As their 20-point lead had all but evaporated, the Blazers needed the 3:09 left in the game to tick away without the Wolves' offense seeing the field.

The crucial drive began with Thompkins gaining two yards on the first two downs, forcing the Wolves to take their second timeout of the half.

Out of the timeout, on third-and-8 from the VSU 27, the Blazers put the ball in the hands of one of their trusted playmakers: Junior quarterback Ivory Durham.

Durham, as he's done in several key spots for the Blazers throughout his career, made something happen – quickly scanning the field after receiving the snap and sprinting through a seam on his way toward the West Georgia sideline for exactly 8 yards for the first down as he was pushed out of bounds.

The fresh set of downs and a 2-yard rush by Seth McGill forced the Wolves to burn their final timeout with 1:20 left. McGill pushed forward for a 3-yard gain and effectively allowed the Blazers to kneel and run out the clock on the Wolves – claiming the Peach Basket for the third year in a row.

"It was everything," Goff said of Durham's run. "They've got a field goal kicker that's really good, so it meant everything. I just wanted to put the ball in one of our best playmakers' hands in that crucial moment right there. Hey, when you've got speed like he does, it's really fun to coach him."

Durham completed 19 of 23 passes for 212 yards with two touchdowns along with 10 carries for 72 yards and two more scores. His 1-yard touchdown run with 13 seconds left in the second quarter gave the Blazers a 27-13 halftime lead.

The Blazers' vaunted Black Swarm, which came into Saturday as the GSC's No. 1 scoring defense at 8.7 points per game, was tested by the Wolves high-flying offense as Frost finished the game 27 of 43 for 228 yards with three touchdowns and one interception.

Remaining stingy against the run, the Blazers held the Wolves to 111 yards rushing on 28 carries as they allowed 339 yards of offense overall.

"There were some untimely pass interferences and sometimes those go your way, sometimes they don't but I'm really proud of how the secondary showed up and played tonight," Goff said of the defense. "When you think about, we played a triple option team, we've played a spread option team, we've played a pro-style team and we hadn't played that many spread offenses. Coach (David) Dean and his staff do a great job over there. Overall, I'm very very pleased with how our defense played. All week, there was a lot of talk about they've got a great offense, they've got a great defense but I reminded our guys, 'Let's not forget. We've got a great defense and we've got a great offense, too.'"

Despite the close margin of victory, the Blazers were able to march up and down the field much of the game against the Wolves – racking up 488 yards of offense in the game with 276 on the ground. Thompkins spearheaded the rushing attack with 150 yards on 14 carries – an average of 10.7 yards per touch.

Though the defense struggled at times Saturday, the offense building an early cushion was key to minimize the impact of the damage the Wolves did in the second half.

"That's a great team in West Georgia. They played great," Durham said. "Our defense, they played pretty good tonight. They helped us out, we helped them out. This team is basically built on trust. We trust them. They trust us. We know we're going to face adversity, we've just got to get through it."

Goff added: "Our offense is kind of take what they give us to be honest. We did a great job of playing complementary football. If they're taking away the passing game downfield, we've been able to run the ball. If they're cramming the box and taking away the run game, we've been able to throw it. We knew coming into this game that West Georgia was going to try to slow us down in the run game and it was going to be a big game. We had to rely on (Durham) to make some key throws and he did that early on in the game and that paid dividends come late in the fourth quarter."

The Blazers took a 14-3 lead with 6:55 left in the first quarter as Durham hit tight end Noah Gillan wide open in the right side of the end zone to cap an 8-play, 75-yard scoring drive.

Following a 9-yard touchdown throw from Frost to Harrison to cut the lead to 14-10 early in the second quarter, the Blazers responded 5 minutes and 50 seconds later with a 30-yard strike from Durham to Lio'undre Gallimore to stretch the lead to 21-10 with 9:04 to go before the half.

Brian Saunds led the Blazers' receiving corps with seven grabs for 96 yards while Gallimore finished with five for 49 yards as seven different Blazers caught a pass in the game.

Defensively, Nick Moss led the Blazers with 13 total tackles – 10 coming in the second half. Cory Roberts, who intercepted Frost in the second quarter, finished with nine tackles.

While the Blazers were only able to sack Frost once, they got to the Wolves' star quarterback four times for hurries.

"The quarterback is very efficient. He's got three really, really good receivers so for our secondary to really hold up like that and our D-line to put pressure on that quarterback – I don't know if he's been hit that many times all season long," Goff said. "They've only given up three sacks all year. I don't know how many sacks we did or didn't get, but I know we got to him several times.

Though Goff and the Blazers downplayed the rivalry aspect in the days leading up to Saturday's game, the matchup presented a much-needed test for a team that's been mowing down opponents much of the season.

"It helps our confidence," Durham said. "We're going to stay humble, but this was a game we needed to win and we executed."

The Blazers host North Greenville at 3 p.m. Saturday for Homecoming before traveling to Pensacola, Fla., Nov. 12 to face No. 5 West Florida in the regular season finale.