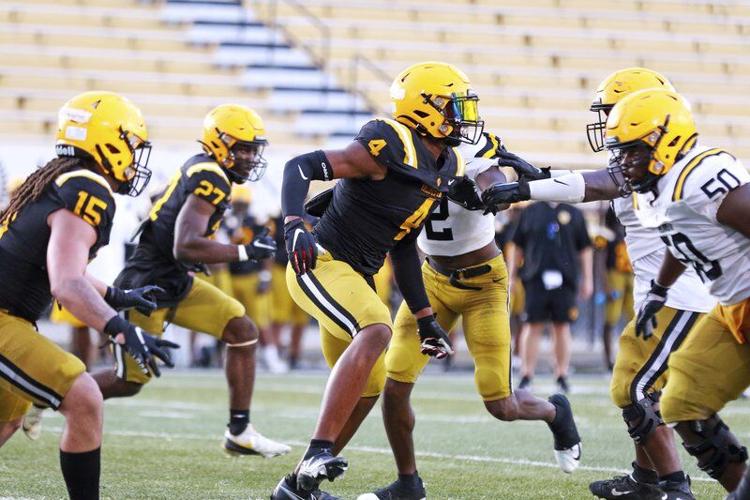 Shane Thomas | The Valdosta Daily TimesValdosta defensive end Gabriel Harris (4) tries to get around a block during the Black-Gold game May 13 at Bazemore-Hyder Stadium. 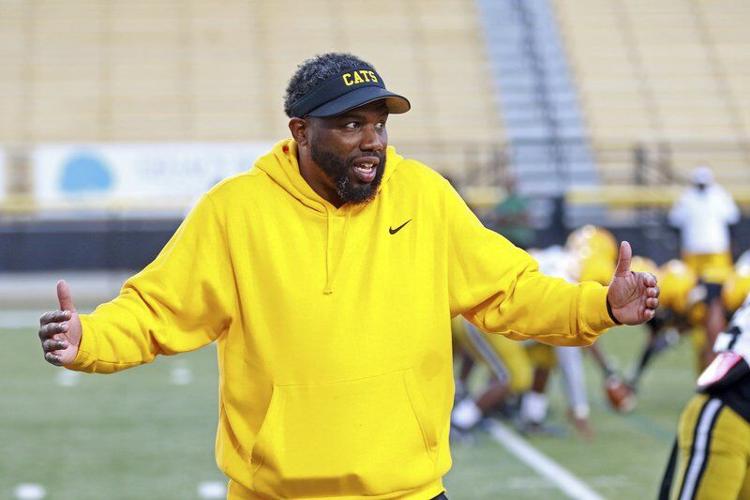 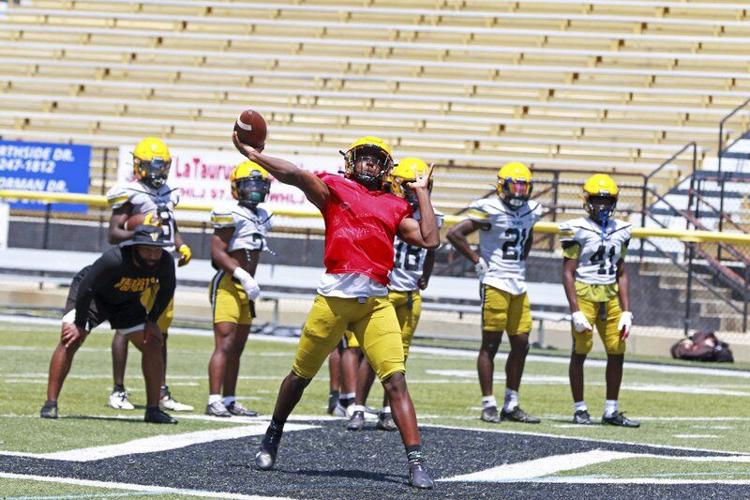 Shane Thomas | The Valdosta Daily TimesValdosta defensive end Gabriel Harris (4) tries to get around a block during the Black-Gold game May 13 at Bazemore-Hyder Stadium.

VALDOSTA – Without the cloud of a postseason ban hanging overhead, the Valdosta High football program is more than ready to turn the page and get back to building a state title contender.

Despite the challenges of trying to keep a team motivated with no chance to play for a state title, first year head coach Shelton Felton and his staff still managed to put a formidable Wildcats team on the field.

The scars left behind by the Rush Propst era were thick as three-star quarterback Amari Jones and four-star wide receiver Tajh Sanders were among five players ruled ineligible for the 2021 season by the GHSA.

Without a legitimate quarterback, the 'Cats were forced to get creative to find ways to produce offense. The answer was to lean on its senior-laden offensive line to create holes for the team's bevy of talented running backs to make things happen.

The results weren't always pretty, but the 'Cats had one of the most productive rushing attacks in the state. In an October non-region game against Westside, Valdosta threw just two passes the entire game, opting for a ground-and-pound style of offense. The 'Cats ran the ball 48 times for 365 yards and blew out the Wolverines 48-6.

One of the biggest question marks coming into the year is the quarterback position. Jo Jo Gardner opened the season as the team's starter, but eventually left the team after the team's non-region win over Tift County last October.

With Gardner's backup, freshman Todd Robinson, not quite ready to contribute, the team found ways to work around their glaring hole at quarterback by adopting wildcat sets, running more run-pass option plays and practically abandoning the passing game entirely.

Gardner is back in the fold this season, along with newcomers Zane Smith and Ansel Clark to give the 'Cats several options to look at throughout the spring and into the summer.

According to Felton, Robinson will serve as the team's starting quarterback heading into the preseason.

"Right now, we've got a slew of guys playing quarterback," Felton said. "Right now, we're going with Todd Robinson – the young guy, a freshman about to be a sophomore. Very athletic. He's been really good in the pocket, controlling the offense. We've still got Jo Jo (Gardner); he does a great job. We've got Zane Smith and one of our most impressive guys, our eighth-grade quarterback Ansel Clark – he's got great composure, he's the future. But right now, we're putting the ball in Todd's hands and going with it."

Robinson looked much more confident with his reps in the spring, making quick reads and finding receivers as well as showcasing surprising speed to break a long touchdown run around the edge untouched.

Felton believes Robinson getting a full offseason and weightlifting program under his belt heading into his sophomore year has paid dividends.

"I think another year in the offseason, the weight room and getting in there with the guys has helped him develop better leadership," Felton said of the young quarterback. "He's more calm and he's earned the respect of the guys in the weight room. I think that's helped him a lot."

Another area of concern for the 'Cats will come on the defensive side of the ball. The 2021 Valdosta defense allowed its fewest points per game (16.0) since the 2014 season.

Having lost 11 seniors from that group, Felton has returning defensive end Eric Brantley and incoming senior and University of Georgia commit Gabriel Harris anchoring a young but talented defense.

Harris has impressed in the summer, having grown to 6-foot-5 and 250 pounds – up from the 6-foot-4 and 237 pounds he was listed at last season at Thomas County Central.

Harris is a disruptive force coming off the edge and combined with Brantley, the 'Cats boast one of the most fearsome pass rushes in the state.

Among the seniors lost was cornerback Jadarian Rhym and safety Isaiah Holland. As preseason camp begins, a couple of players to watch are upcoming junior cornerback Jaylen Bentley and sophomore safety Khalil Mollay.

"Last year, we lost a lot of great seniors on defense. We're very young on defense, but we're led by one of the best players in the state of Georgia in my opinion in Eric Brantley. Gabe Harris, who's learning the system, he's another good one. We've just got to rally around those two guys.

"A surprise so far has been Jaylen Bentley. He's a physical, nice sized safety. (Khalil) Mollay has been really good. We've got some good young guys. The biggest thing is to get them caught up on the plan and the schemes. Not having playing time is something different, but right now, we're very young on defense but we've got a lot of energy and we're playing with a lot of speed."

In addition to the secondary, the 'Cats saw losses at the linebacker position with the departure of leading tacklers Jacquez McGowan, Jaylin Berrian and Edward Carter.

Felton likes what he's seen from upcoming junior Amari Tomblin, whom he already touts as the leader of the linebacking corps, along with upcoming seniors Nehemiah Dennis and Jarius Curry at middle and outside linebacker.

"We're really thin at linebacker right now. We've just got to find a good fit," Felton said. "We moved (Jontavious) McGriff to linebacker. He's looking pretty good for the first week. We've still got to grow and get better at that position. That has to get a lot better."

One area Felton has been high on is the running back position.

A workhorse unit for the 'Cats last season, Felton has touted this crop of running backs as the future of the team. The group of Ahmad Denson, Jordan Gatlin, Charles Williams, Shaq Wright and Javari Harris each got touches and made positive contributions in the spring game.

According to Felton, while the running back position doesn't have a ton of size, each player's combination of speed, quickness and football IQ makes the unit productive.

"That group, there's so many (talented players)," Felton said of his running backs. "We're not real big, but we're shifty and strong with good vision. We've got Shaq Wright, whose game is developing. We've got Gatlin, who can do it all for us. We've got (Ahmad) Denson coming back from last year; he had a great season. One surprise is (Javari) Harris. He's got really good vision. That position is real deep. We're not very big but we're shifty, strong and very smart. We've just got to keep playing, rotating guys in and out and build depth."

Now that the team has the tumultuous 2021 season in its rearview, a new challenge lies in front of the 'Cats as they move up to Region 1-7A this season – joining rivals Lowndes and Colquitt County as well as Camden County and Richmond Hill in the new classification.

On Aug. 12, the 'Cats open with a home exhibition against Thomasville. The regular season begins with the team's first three games at Bazemore-Hyder Stadium as the 'Cats host North Miami in their season opener Aug. 19, followed by Cook Aug. 26 and Banneker Sept. 2.

The 'Cats face a stiff test in their first road game of the year as they visit defending 5A state champion Warner Robins Sept. 9.

Heading back home, the 'Cats face the Coral Glades Jaguars Sept. 16 before tangling with Region 2-7A power McEachern Sept. 23.

Due to the reclassification, the 2022 Winnersville Classic will be held at Lowndes for the second straight year. The 'Cats and Vikings will battle off of an open week Oct. 7 to kick off region play.

Two of Valdosta's last three games will be at home as the Richmond Hill Wildcats come to town Oct. 14. The 'Cats will go on the road against Camden Oct. 21 and wrap up the regular season at home against the Colquitt County Packers Oct. 28.