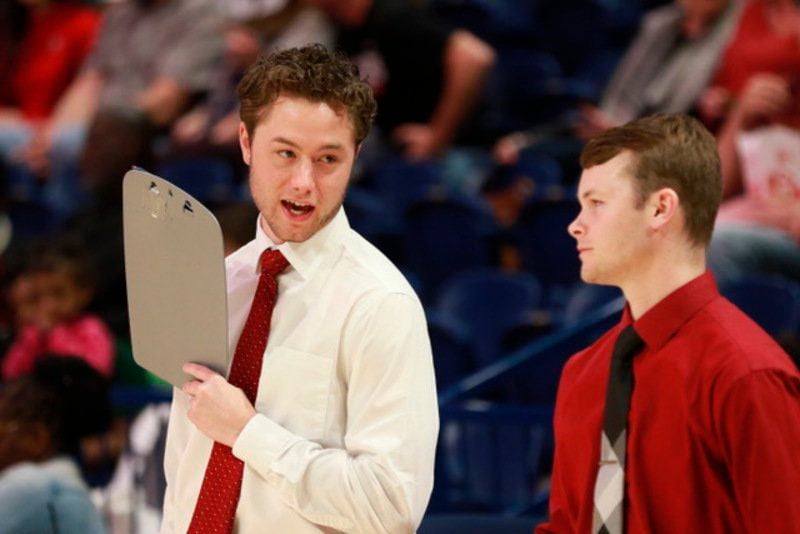 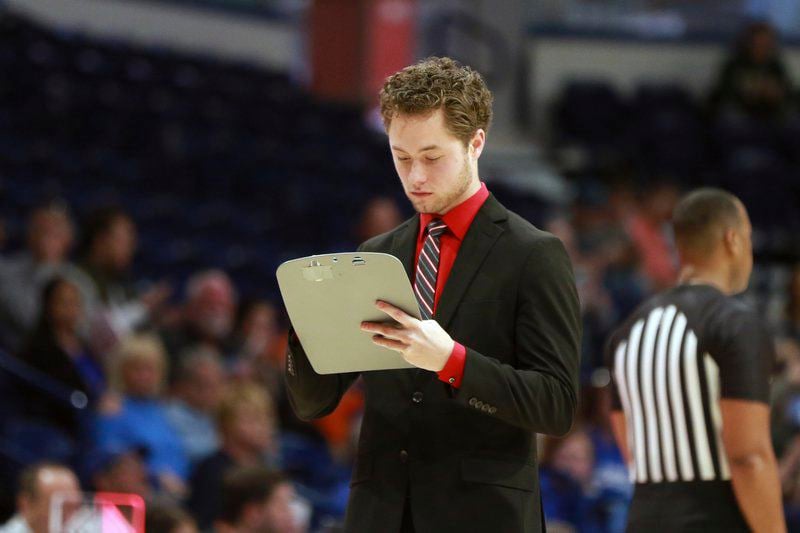 Shane Thomas | The Valdosta Daily TimesValdosta State graduate assistant Nick Nossaman writes on a notepad during a timeout in the Gulf South Conference Championship game against Alabama-Huntsville on March 8. 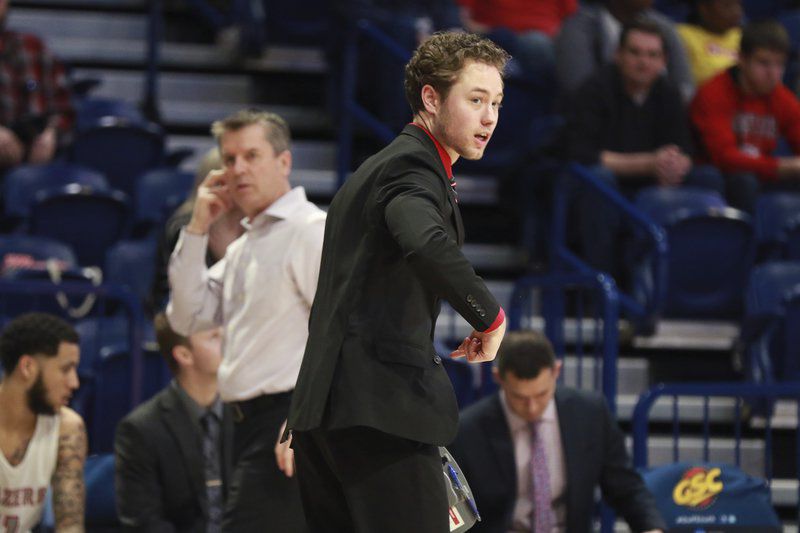 Shane Thomas | The Valdosta Daily TimesValdosta State graduate assistant Nick Nossaman gestures to a player during a timeout in the Gulf South Conference Championship game against Alabama-Huntsville on March 8.

Shane Thomas | The Valdosta Daily TimesValdosta State graduate assistant Nick Nossaman writes on a notepad during a timeout in the Gulf South Conference Championship game against Alabama-Huntsville on March 8.

Shane Thomas | The Valdosta Daily TimesValdosta State graduate assistant Nick Nossaman gestures to a player during a timeout in the Gulf South Conference Championship game against Alabama-Huntsville on March 8.

A Powell, Ohio native, Nossaman was hired as an assistant coach at Division III Ohio Northern University on July 3.

“In the midst of the whole situation with COVID-19 going on right now, I’m excited,” Nossaman said. “I feel very lucky and grateful to be hired as a full-time assistant at any level.”

After the Blazers’ season ended before the NCAA Tournament could begin, Nossaman went back to Ohio to be closer to family while still fulfilling some of his coaching duties for the Blazers.

Nossaman earned his Master’s degree in higher education learning from Valdosta State on May 9 and immediately turned his attention to the job hunt.

The first few weeks of June, Nossaman worked in houses in downtown Columbus as a means to make money during the pandemic. While working, Nossaman got the alert that a position at Ohio Northern opened up and threw his name into the running.

Nossaman called Bensman right away to inquire about the position. Ironically, Bensman recruited Nossaman as a high school player and one of Nossaman’s former high school teammates played for Bensman in college.

As a player, Nossaman began his college career at Wooster and played two seasons for the Fighting Scots before transferring to Otterbein University where he finished his playing career.

Nossaman graduated from Otterbein in 2018 with a bachelor’s degree in history before joining the VSU coaching staff prior to the 2018-19 season.

“What people don’t understand is how difficult it is to get into college coaching in general,” Helfer said of Nossaman’s move to Ohio Northern. “There’s so many people that want to get into that level. For him to accomplish that says a lot about Nick as a person, says a lot about our program and I think it was a great thing for him.”

In addition to helping lead the Blazers to 50 wins over his two seasons on the sideline, Nossaman was instrumental –– along with fellow grad assistant Brad Burkholder –– in two Gulf South Conference regular season championships and two NCAA Division II Tournament berths.

As an assistant under Helfer, Nossaman learned the inner workings of running one of the most successful basketball programs in the country.

“I think Nick has a great basketball mind,” Helfer said. “He just understands the game. I think that’s because of how he grew up. His dad is a longtime high school coach and I think Nick just understands basketball in general. He’s also just a good person –– willing to do whatever I or Blake (Justice) asked of him. When you get started in coaching, you’ve got to be the guy that does everything on an instant’s notice. That’s what Nick really embraced when he came here.”

Nossaman added, “I’ve learned a lot from Coach Helfer –– especially the overall handling of situations you have to handle on a day-to-day basis in terms of recruiting, school, the athletic department as a whole and players and everything. Everybody is different. You’re going to talk to players and you may talk to somebody differently than you talk to somebody else and it’s just handling situations to the best of your ability to get things done.

“As a young G.A., I stayed in the office pretty much all hours of the day. ... Recruiting is one of the biggest things as an assistant coach, especially, because if you can’t bring in players, then you’re not really helping the program out that much.”

Over the past two seasons, Nossaman helped the Blazers establish a talented core of players such as Burke Putnam, Imoras Agee, and Cam Hamilton among others.

According to Nossaman, being able to learn from a master recruiter like Helfer and spending time on the road with former Blazer standout Blake Justice has groomed him for the next step in his career.

“Bringing in players and learning how to talk to those guys and what to say is important,” Nossaman said. “I was able to go on three or four recruiting trips with Coach Helfer and with Blake as well. Me and Blake went on a lot more together. Building that relationship with the recruits and trying to convince them to come to your school was a huge takeaway for me.”

Though he moves on to ONU, Nossaman cherishes his time with the Blazers. His passion for the coaching profession endeared him to Helfer and Justice, which allowed him to handle more responsibilities on the team and help contribute more to the team’s winning culture.

“I loved it –– the learning experience, I don’t think it could’ve gotten any better,” Nossaman said of his time with the Blazers. “Learning from Blake and Coach Helfer. Blake especially, just being a player down there himself and then going overseas and already being an assistant at 24, 25 years old, I got to learn a lot from him and he knew that I was very passionate about it so he gave me a great deal of responsibility, which I loved because I was able to learn very fast on different things. The winning culture...it was unreal to be a part of. I wouldn’t have really wanted to go anywhere else. I learned so much and definitely winning helps. I was able to see how to do things the right way and what you have to do in order to win those league championships and make it to the NCAA Tournament.”

Returning to his home state has its perks and pitfalls. He laments returning to the snowy, frigid winters of Ohio though he won’t miss the humid South Georgia summers.

Weather aside, Nossaman gets a chance to coach with the prospect of his family eventually attending games, which wasn’t always easy 809 miles from his hometown. Getting the opportunity to coach in front of his dad, Nossaman says, will be a cool experience.

“Honestly, when I was down there, I would travel during the summer and work camps and stuff like that,” Nossaman said. “Around August every year, the humidity down there is crazy. Winters down there are so much better than the winters up here. I did not miss seeing snow, so that will be a change for me during basketball season –– not just putting shorts and a sweatshirt on anymore. Coming home is nice. My whole family is up here. They’ll be able to come see games too and my dad is still coaching high school basketball up here and it’s only an hour and 20 minutes from where he coaches so he should be able to make some games. Overall, it’s very exciting. I’m just glad to be in a full-time job, honestly.”