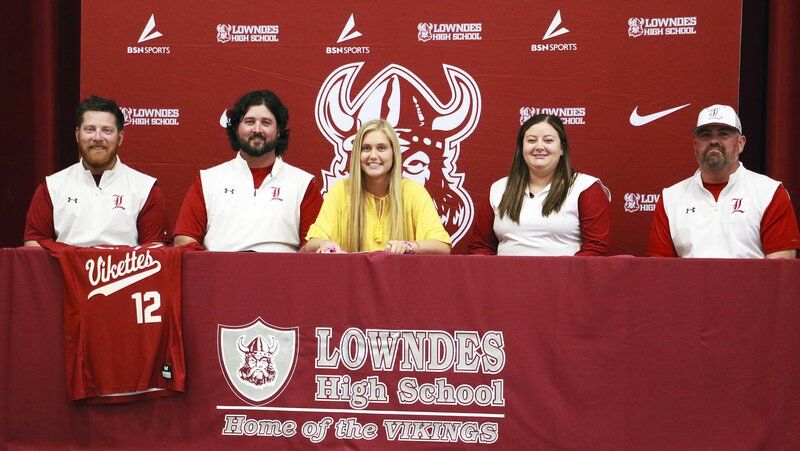 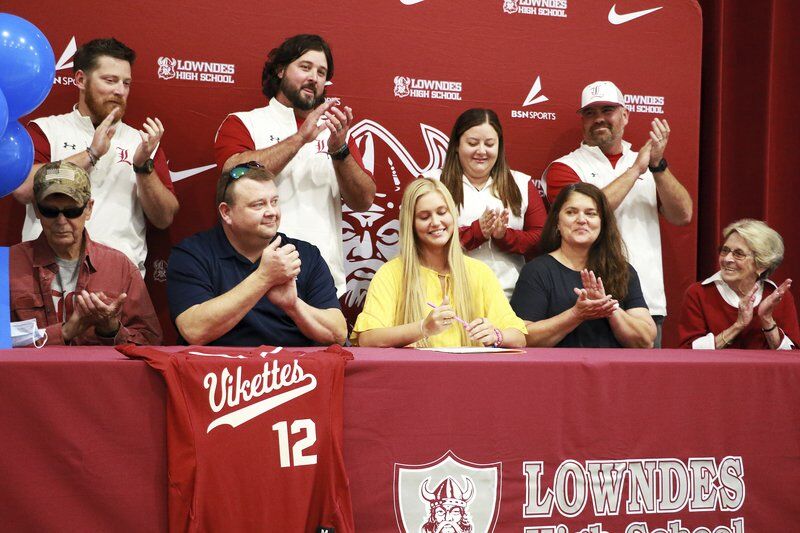 Shane Thomas | The Valdosta Daily TimesLowndes senior pitcher Jolee Camp, center, gets applauded by her family and members softball coaching staff as she puts the cap on her pen after signing with Tallahassee Community College Wednesday in the LHS cafeteria.

Shane Thomas | The Valdosta Daily TimesLowndes senior pitcher Jolee Camp, center, gets applauded by her family and members softball coaching staff as she puts the cap on her pen after signing with Tallahassee Community College Wednesday in the LHS cafeteria.

VALDOSTA – Lowndes High softball is sending its ace to the next level.

"What convinced me to go (to TCC) was the environment down there. The people, they actually cared. They immediately accept you when you get there – really friendly people down there."

"It's bittersweet to see her go, but to see the maturation and the improvements and how hard she's worked to get to this moment," Lowndes head softball coach Stewart Thomas said. "It's very rewarding for her, I know, but for the whole school and program, it's a very rewarding day."

Not only does Camp's ability shine in the circle, according to Thomas, her competitiveness jumps out as well.

"She can be overpowering when she wants to, but to me, it's the competitiveness. It's the stuff that you can't teach. It's the stuff that you just have," Thomas said. "She has that competitive edge where it doesn't matter who gets in the box, she believes she can get you out. I think that's what we're going to miss the most. I'm glad that she's come through the program and I hope that our younger pitchers have been able to recognize that and been able to learn from her and the competitive edge she brings to the table."

Camp joins an Eagles team that finished 12-30 under veteran coach Patti Townsend. The Eagles finished the season on a 10-game losing streak and struggled particularly on the road, going 2-12 in road games and 3-9 at neutral sites.

Despite their struggles, Camp's competitive fire and work ethic should be a welcomed addition to the lineup.