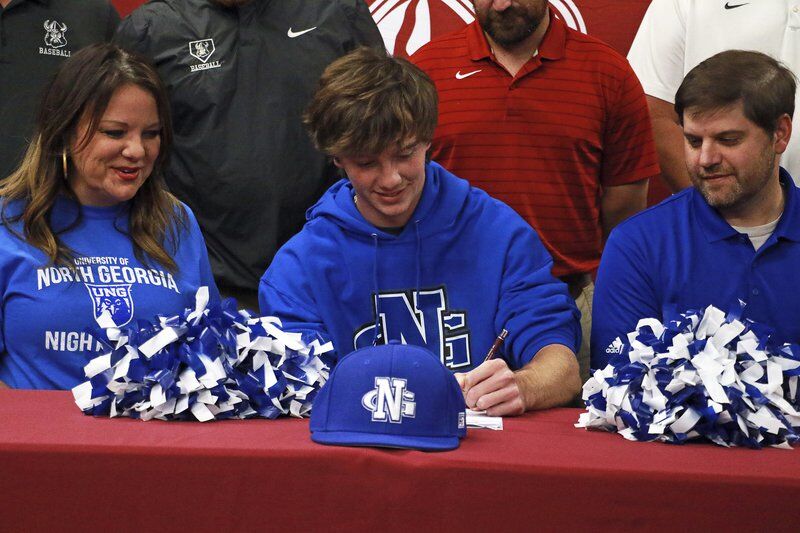 Shane Thomas | The Valdosta Daily TimesLowndes senior baseball player Mason Steel signs a letter of intent with the University of North Georgia as his parents look on Monday in the LHS baseball fieldhouse. 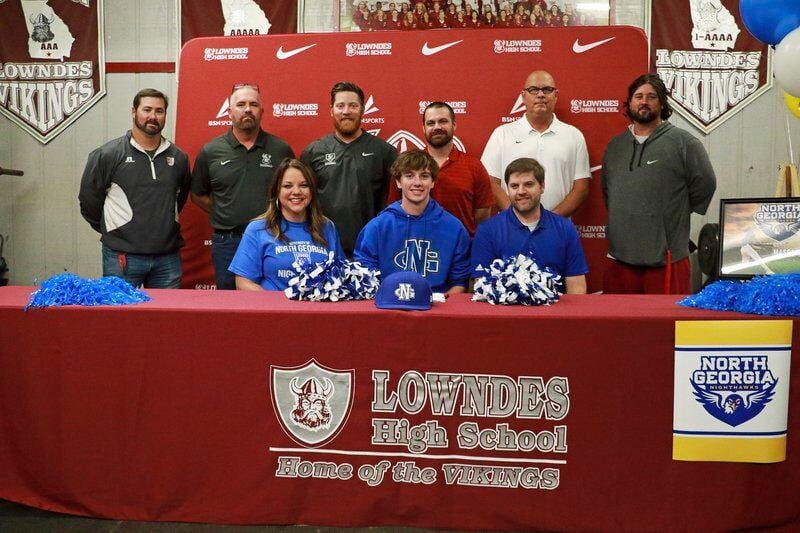 Shane Thomas | The Valdosta Daily TimesLowndes senior baseball player Mason Steel sits with his parents, the LHS baseball coaching staff and Athletic Director Randy PcPherson after signing a letter of intent with the University of North Georgia Monday in the LHS baseball fieldhouse.

Shane Thomas | The Valdosta Daily TimesLowndes senior baseball player Mason Steel signs a letter of intent with the University of North Georgia as his parents look on Monday in the LHS baseball fieldhouse.

Shane Thomas | The Valdosta Daily TimesLowndes senior baseball player Mason Steel sits with his parents, the LHS baseball coaching staff and Athletic Director Randy PcPherson after signing a letter of intent with the University of North Georgia Monday in the LHS baseball fieldhouse.

Steel, an outfielder, infielder and pitcher, signed a letter of intent with the University of North Georgia Nighthawks – a Division II baseball program in Dahlonega, Ga.

"It felt good to finally sign and have that weight of where you're going to end up going to college off your chest because, your whole life, you just train to be able to play at the next level," Steel said. "It meant a lot to me and my family. It's been a long journey with travel ball and other schools and different options and everything. It felt good to finally make up my mind and have a set place and know where I'm going next year. ... I felt like I was really wanted there and it just felt right."

Steel, who will play first base for the Nighthawks, said the coaches, the success of the program and the facilities were his main reasons for choosing North Georgia.

When the season starts in February, the Vikings will be playing on a renovated Noel George Field, complete with an all-new turf field. After seeing the turf field at North Georgia, Steel will be acclimated to the new surface as a senior.

"Their baseball facilities are insane," Steel said of North Georgia. "It's an all-turf field, indoor facilities, brand-new locker rooms and everything. One of my coaches told me the other day, 'You're gonna play on turf for the rest of your career.'"

The Vikings went on to the GHSA Class 7A state semifinals before falling to eventual state champion Parkview.

The historic run ended May 17 in a two-game sweep at the hands of the Panthers, who won the first game 8-0 and closed out the series with a 16-2 rout.

For the Vikings, the semifinal appearance was the first for the program since 2006 and the first under head coach Ryan Page.

"Mason's a tremendous baseball player but more importantly, he's a good dude," Page said. "He's a good kid. We're excited for him. He's going to a tremendous place. I think, before he went on his trip, he was surprised with how much he liked it. It's a really cool place, if you've never gone there – not only a baseball school, but just a beautiful place in general. We're excited for him and his future, but more importantly, we've got work to do here before he goes."

For Steel, the work Page alludes to revolves around doing whatever it takes to get back to the state playoffs and making another deep run in his senior year.

The bitter taste of losing to Parkview still hangs on the tongues of every Viking returning for next season. That bitterness, Steel says, gives the Vikings a chip on their shoulders heading into next season.

"It was a great run with them boys last year," Steel said. "All of us, we had a bond. We grew up playing together. That's one thing those Atlanta teams don't have. They didn't know each other before the school year started. I knew those kids last year and I think that's what allowed us to go so far, but losing in that Final Four and the way we lost, that feeling of losing whenever you're that close – nobody wants to feel that again. It's definitely motivated everyone that was part of that group last year to work harder, do that extra rep. It's almost like we're playing with a chip on our shoulder. We want them again."

Originally, Steel had committed to Kennesaw State before financial issues forced the school to withdraw its scholarship offer.

Shortly after that setback, Steel got a phone call from assistant coach Kane Keith at North Georgia expressing the school's interest in him. Keith attended one of Steel's summer travel ball tournaments, which turned out to be one of the senior's better tournaments of the summer season.

With the first base position becoming vacant with the Nighthawks, Steel made a good enough impression to secure an offer that he ultimately signed on Monday.

"We stayed in contact," Steel said. "We had a few phone calls and they were really interested and telling me everything (about the program). They took me up on a visit and I walked around everywhere and saw everything. I had good conversations with them. Like I said before, they made me feel wanted.

"They explained to me that I have a pretty good chance of starting at first base. Their senior first baseman this year is leaving, so that position is going to be up for grabs for anyone to take. He says he has a good feeling that I'm the right guy for that and they offered me."

Steel has always been a Viking – having been in the Lowndes County school system since he was in third grade.

When his high school career began, he played for head coach Danny Redshaw, who had returned to the post after former coach Rusty Beale's dismissal after the 2018 season.

Redshaw led the Vikings to an 18-12 record and a Region 1-7A championship before stepping down in favor of Page, who Steel said has shifted the team's expectations in his short time as head coach.

"When I started high school, we had a different baseball coach and everything and it was just a different environment," Steel said. "Everybody wanted to win, but like Coach Page has said, the goal then was just to win region. Coach Page has done a great job and so have the guys of completely changing that environment to where region (championships) should be a given. We're supposed to go deep into the playoffs. It's just cool to see how all the guys have been affected since the new coaching staff came in.

"Lowndes means a lot to me because I've lived here my whole life. It's cool to see that we can do something with the program and represent Valdosta in a good way and it be other than football."