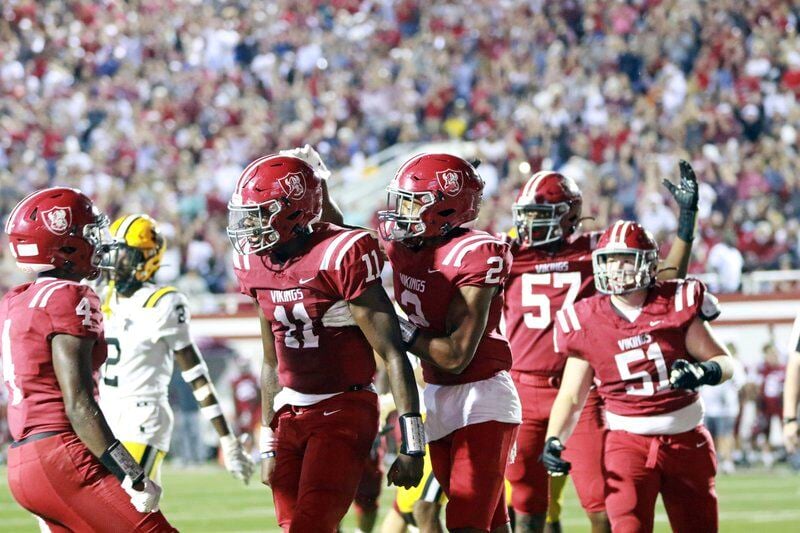 Shane Thomas | The Valdosta Daily TimesLowndes quarterback Jacurri Brown (11) celebrates with his teammates after a 15-yard touchdown run against Valdosta in the Winnersville Classic Sept. 24 at Martin Stadium. 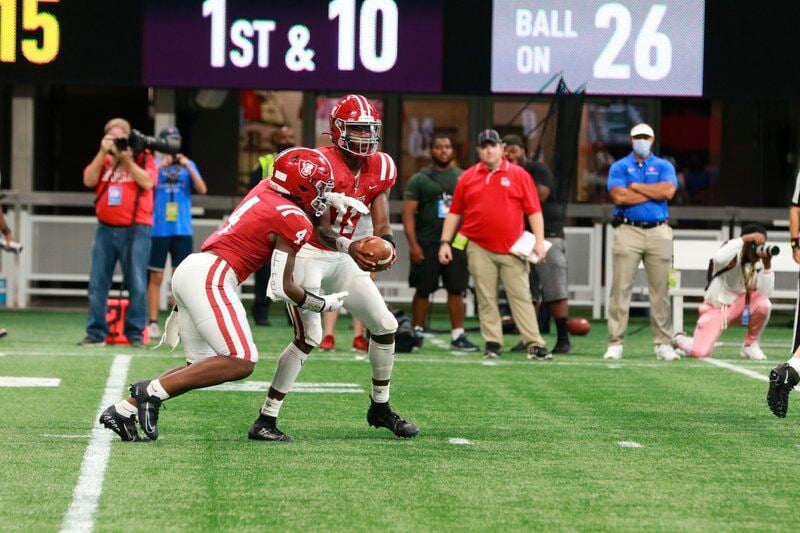 Shane Thomas | The Valdosta Daily TimesLowndes quarterback Jacurri Brown (11) hands off to running back Chase Belcher (4) during a game against Walton in the Corky Kell Classic Aug. 21 at Mercedes-Benz Stadium.

Shane Thomas | The Valdosta Daily TimesLowndes quarterback Jacurri Brown (11) celebrates with his teammates after a 15-yard touchdown run against Valdosta in the Winnersville Classic Sept. 24 at Martin Stadium.

Shane Thomas | The Valdosta Daily TimesLowndes quarterback Jacurri Brown (11) hands off to running back Chase Belcher (4) during a game against Walton in the Corky Kell Classic Aug. 21 at Mercedes-Benz Stadium.

VALDOSTA – The Lowndes High Vikings look to protect home field for their homecoming game against the Alcovy High Tigers this Friday.

Last week, the Tigers recorded the first win of their young season against Rockdale County to bring them to 1-2 on the year.

With region play right around the corner for the Vikings, the team is looking to build on the success they had against Valdosta and continue rolling against the Tigers, who have had a short season due to COVID cancelations and rescheduling.

If the Vikings' defense is prepared for another showing like last weeks, then the Tigers are in trouble. Vikings head coach Jamey DuBose sang the praises of his defense and its performance against a talented Valdosta offense.

“I thought defensively we played real solid last week,” DuBose said. “We didn’t really have mistakes as a whole, we played really good clean football and hopefully we can continue that into the sixth week.”

The Vikings' offense got the job done, but star quarterback Jacurri Brown was never able to stay comfortable in the pocket during the game and completed only 34% of his passes for 80 yards.

The athletic senior was able to rush for another 54 yards and a touchdown on 15 attempts on the ground. Brown’s athleticism was showcased on the touchdown run after the offensive line broke down and two Valdosta Wildcats bum-rushed him.

Brown was able to evade them and then make several more defenders miss while changing directions from one side of the field almost to the other on the 15-yard score. However, that play also encapsulated the biggest problem of the game for the Vikings – the offensive line struggled.

The Wildcats recorded 22 tackles for a loss in the game but were only able to manage four sacks on 16 QB hurries. Escaping so many hurries is another testament to Brown’s athleticism.

DuBose mentioned Valdosta’s size up front and the pressure it caused. “They [Valdosta] blitzed us a lot and sometimes that caused a scramble, but when we scrambled, I know we made some plays, and other times we dropped some balls that hit us in the hands,” DuBose said.

Senior running back Chase Belcher bounced back from a subpar performance a couple weeks ago at Lee County, rushing for 98 yards and two touchdowns against Valdosta. DuBose talked about the chemistry between the two players and how they feed into the team’s tempo.

“Chase and Jacurri have a lot of confidence in playing with each other…and we're a tempo group on offense,” DuBose said. “When we don’t think about it and just get it snapped, we’re really good. We snapped it 70 times last week.”

The Tigers had 68 snaps in their win last week, and 66 in a loss the previous. So if the home defense doesn’t have any say in it, there could be a lot of footballs snapped this Friday.

The Tigers are looking to build on some momentum of their own after their first win of the season. Running back Tristan Mayweather is fresh off a 189 total yard performance for the Tigers.

The senior leads the team with 277 rushing yards, 173 of which came last Friday. Mayweather is a quick back who is quick to bounce outside to win in space. He’s gotten the largest chunks of yardage this season that way.

One of the running back’s 25 carries last week was a 55-yard tear down the sideline where Mayweather showed some burst to get around the edge.

The Vikings have struggled some this season with explosive backs getting the edge and turning it for big gains. Against Lee County and Lake Gibson, the Vikings allowed running backs to break free for 224 and 186 yards respectively.

After the Lee County game a couple weeks ago, DuBose talked about “the big back getting outside of [the Vikings defense] a little bit” as well as “getting outnumbered on the perimeter.”

However, the Vikings' defense showed improvement against Valdosta last Friday by not allowing any back to rush for over 100 yards and holding the team to only 168 total on the ground. DuBose attributed a lot of that change to experience.

“We were a young football team early on, we're half a year into it now, we’ve been through some tough games,” DuBose said. “This team has grown up, I think it's matured and I think we’re game tested.”

Every part of the Vikings' defense was playing in unison last week, especially the defensive backs, who only allowed 6 completions on 21 attempts to Valdosta quarterback Joseph Gardner.

They’ll have to again bring their 'A' game against the athletic receivers of the Tigers.

“[Alcovy] is an athletic football team. Are they Valdosta? No. But they’re a team that has some good talent and has some athletes,” DuBose said. “they’ve got a quarterback who throws a good ball and some athletic receivers.”

One of those athletic receivers is senior Mathias Height. Height was the leading option through the air for the Tigers last week with 112 receiving yards.

That was the 5-foot-11 wideout’s second straight game with 100+ yards receiving, after missing out on three straight by only a yard in the first game of the season, a 37-7 loss against North Forsyth.

Height leads the team with 338 receiving yards through the first three games of the season. He’s been a problem for teams this year on all three sides of the ball. The athlete also returns kicks and plays some corner back, where he caught a pick last week.

But regardless of the team or the talent on it, DuBose is confident the Vikings can hang with anybody.

“They’re going to put eleven on the field just like everybody else and we gotta execute. That’s what we did defensively last week. We had guys on the field execute the game plan and play as a team and a unit.” DuBose said. If we can do that again this Friday night we can be successful on both sides of the ball.”

Kickoff for Friday's game is scheduled for 8 p.m.