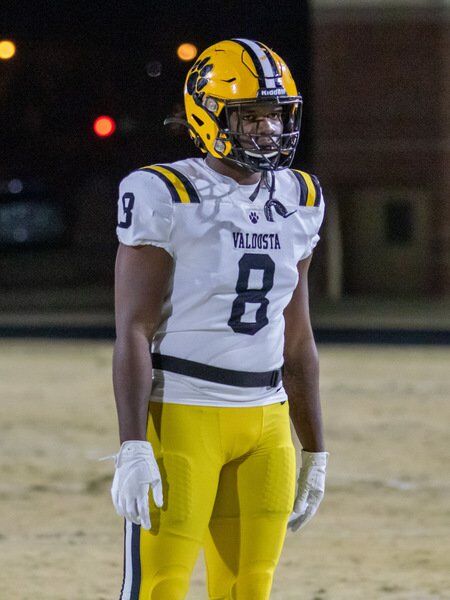 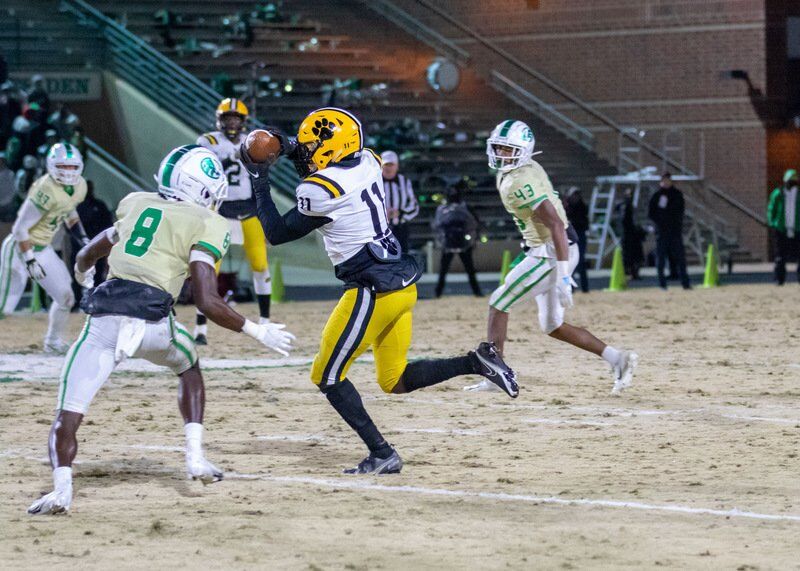 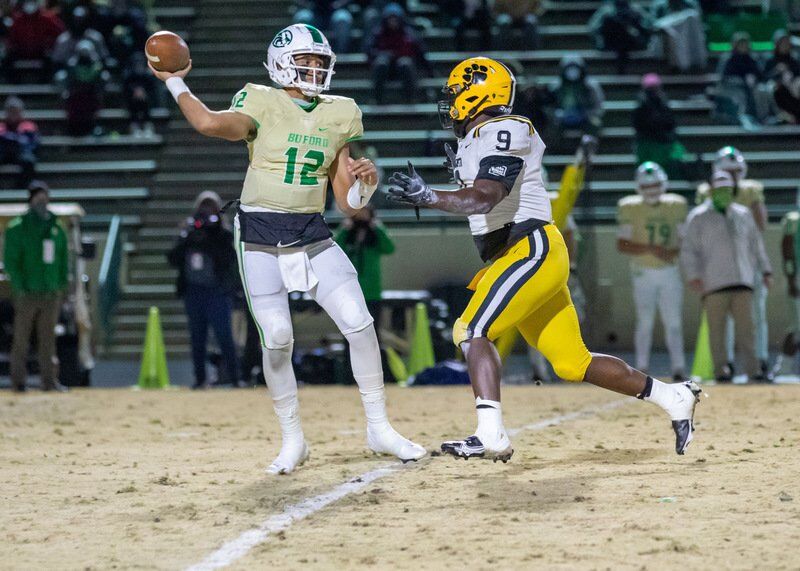 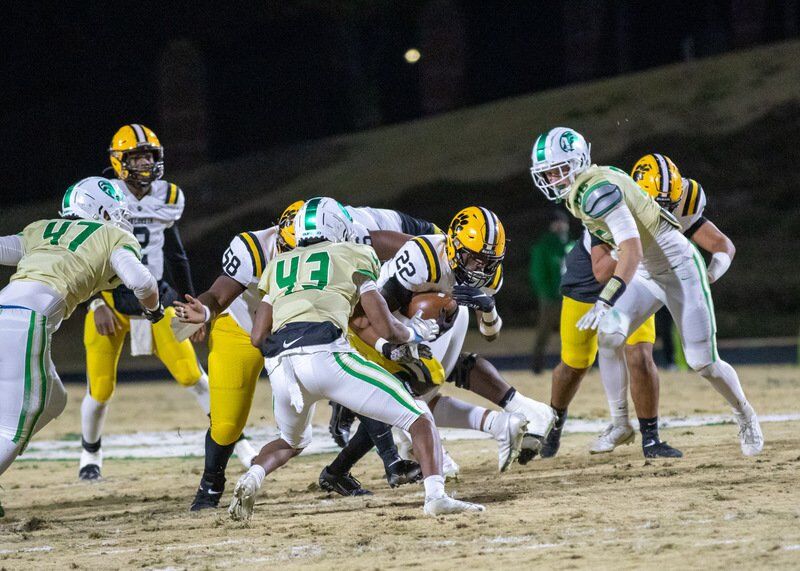 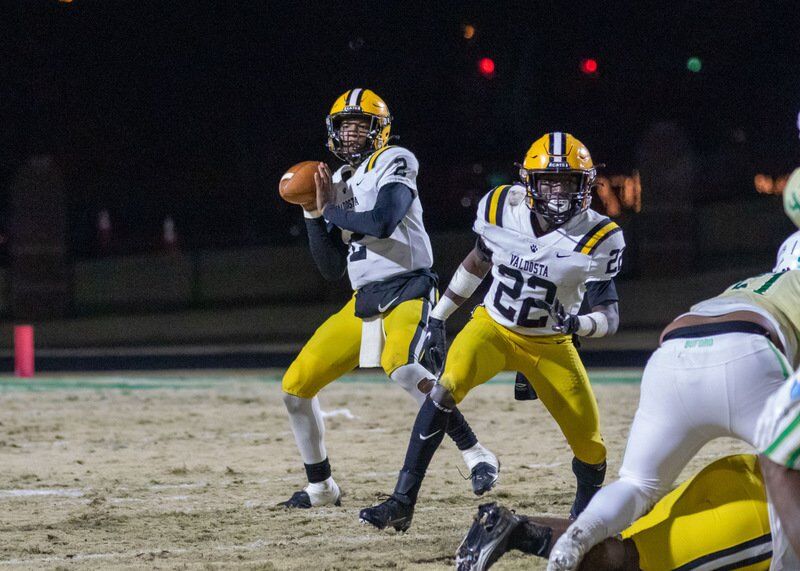 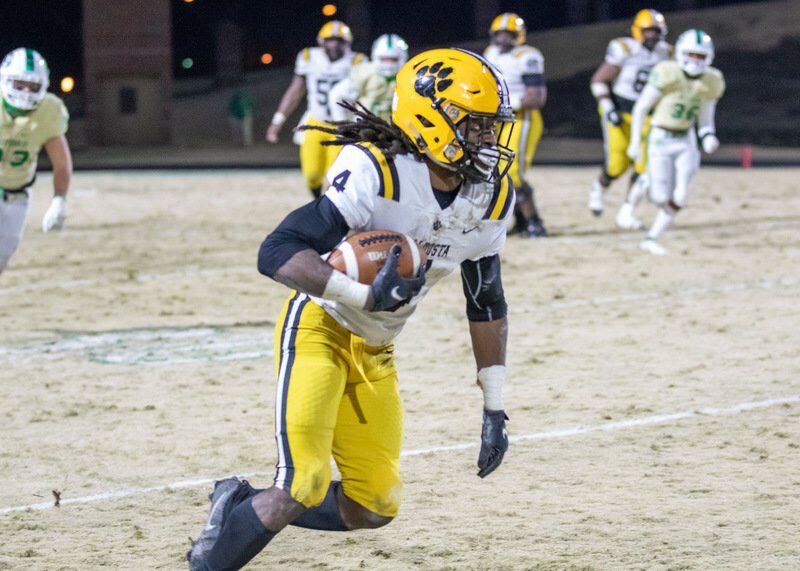 BUFORD –– At the start of a fight, there are only two mentalities.

You either knock someone out or you get knocked out.

The latter was the case for the Valdosta Wildcats as they fell to the Buford Wolves 45-26 in the 6A semifinals.

On the Wolves’ first play from scrimmage, Buford dialed up a play-action pass that went for 76 yards and gave them a 7-0 lead.

Valdosta’s offense seemed poised to respond on its following drive but an Amari Jones pass was tipped, intercepted and returned 52 yards for Buford’s second score of the night.

Backed into a corner, the Wildcats attempted a fourth-down conversion on their next drive but were stopped short. After the turnover on downs, Buford took over in Valdosta territory and added a third touchdown, making it 21-0 before the halfway mark in the first quarter.

“We just didn’t come to the party early,” head coach Rush Propst said after the game. “We got taken out of our game, got down 21-0 early and was playing behind the whole game. When you’re on the road in a semifinal game against a team that’s established like them, you just can’t start out bad and we started out bad. For whatever reason you want to say, we started out bad.”

To make matters worse, injuries on offense limited Valdosta’s play-calling capabilities. The Wildcats started the game without running back Chris Wolfe, leaving Terrell Denson to carry the brunt of the rushing burden.

Senior receiver Javonte Sherman was injured after being tackled in the first quarter. He exited the game and didn’t return after Valdosta’s fourth possession.

Sherman’s early exit caused the offense to spiral while trying to find a way to plug the void the three-star receiver left.

By the half, Buford had built a 31-point advantage over the Wildcats.

But, true to the resiliency of Valdosta this season, the Wildcats came out firing in the second half.

On the first possession after halftime, Jones found junior receiver Tajh Sanders on a slant route, as Sanders broke a tackle and sprinted to the end zone for a 52-yard score—Valdosta’s first points of the night.

The next possession was more of the same as Jones found a streaking Sanders on a go route and dropped the ball into the basket for Valdosta’s second touchdown.

By night’s end, the pairing accounted for three touchdowns and 148 yards of Jones’ 301 passing yards.

“First off, I just want to say that Tajh Sanders is a dog,” Jones said after the game. “He’s an animal. He’s a great guy. He’s actually one of my closest guys, he’s kind of like my best friend. It just speaks volumes of this team. We showed our potential and we’re just going to go back, work in the offseason, look at this tape and build on it. Have it as motivation next year to win a state title.”

The junior duo’s efforts weren’t enough to bring the Wildcats back as Buford continued to score points.

As time drained in the fourth quarter, it became clear that Valdosta wouldn’t be able to mount a full comeback.

By the time the clock hit triple zeroes, there were two feelings.

On one hand, it’s rough for the seniors that dedicated their time to the program to have it end in this fashion. On the other, the second-half surge showed the potential of the Wildcats next season.

As the sun set on the 2020 season, the Wildcats navigated a coaching change, played through a pandemic, dealt with roster uncertainty and still managed to claw their way into the state semifinals.

For a class of seniors that started their careers on the heels of the last Wildcat state championship, they end as one of the four best teams in the state.

For the underclassmen, they have a taste of what’s required to play at a high level, and it’s something that Propst hopes to build on next year.

The 2020 Valdosta Wildcats finished with a 7-5 record, were Region 1-6A runner-ups and one of four teams to make it to the state semifinals.