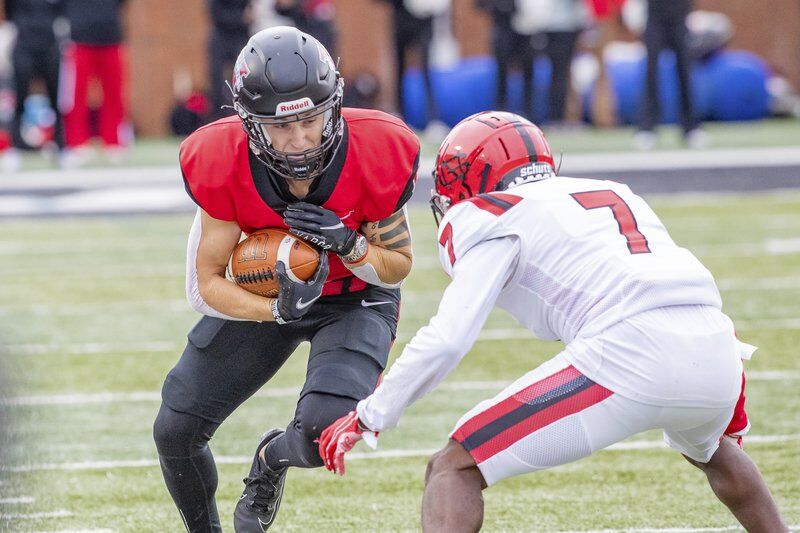 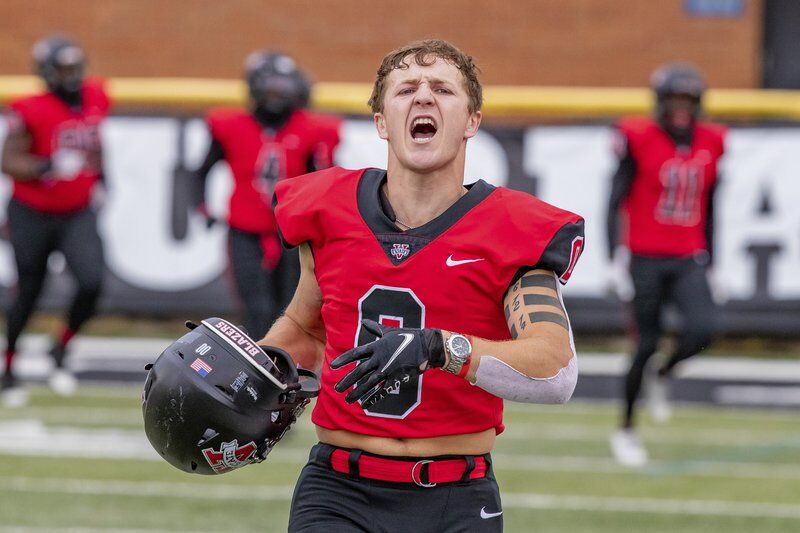 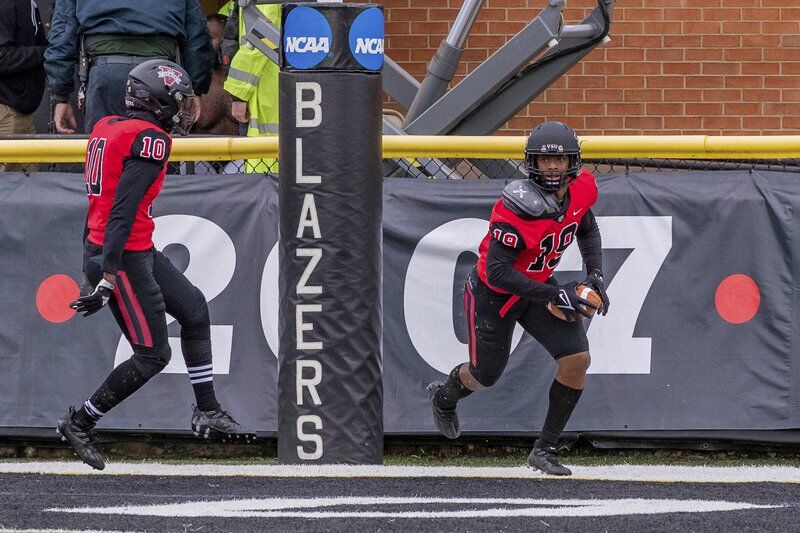 Mary Ann Miller | Special to the TimesValdosta State defensive back Cory Roberts (19) reacts after intercepting a pass by North Greenville's Kaelan Riley during a game Saturday at Bazemore-Hyder Stadium. 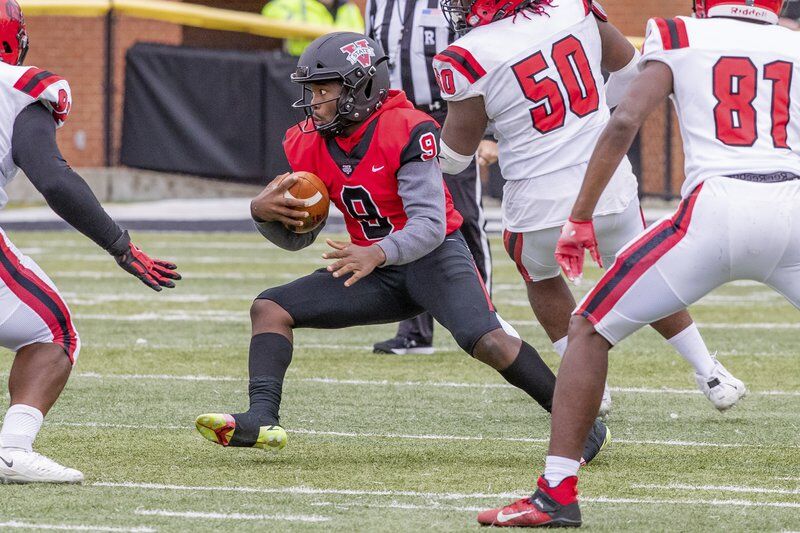 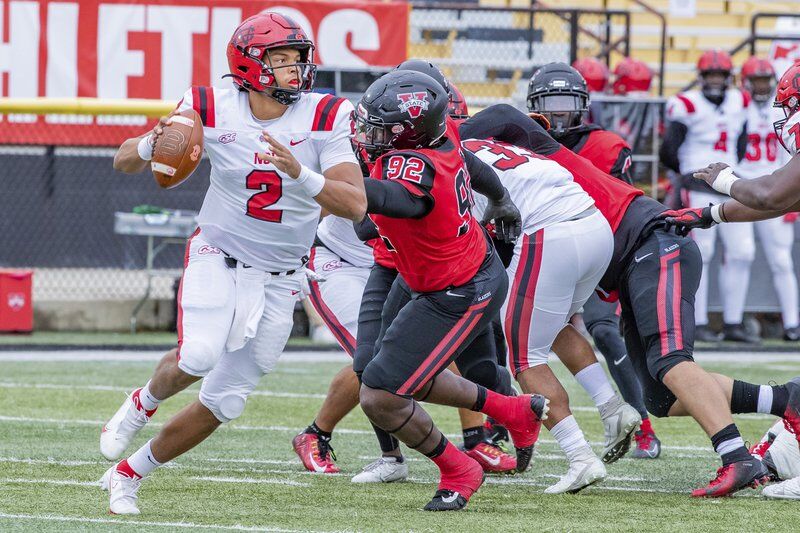 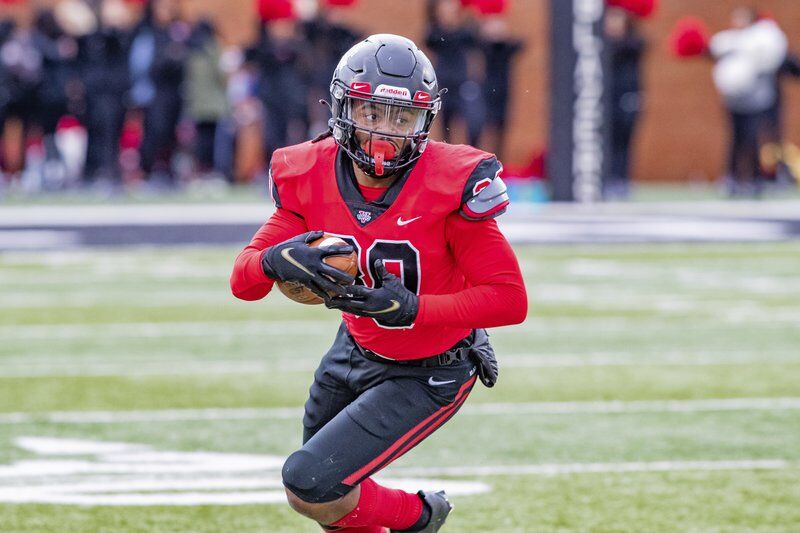 Mary Ann Miller | Special to the TimesValdosta State running back Seth McGill (30) carries the ball during a game against North Greenville Saturday at Bazemore-Hyder Stadium. 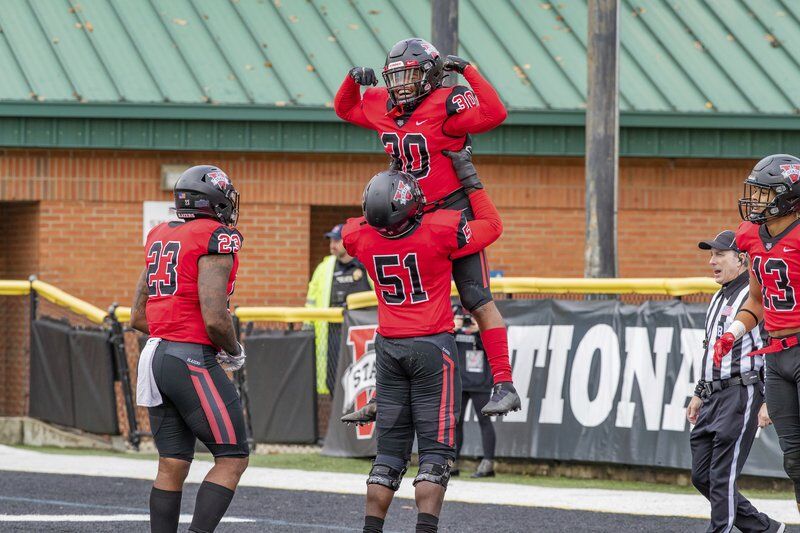 Mary Ann Miller | Special to the TimesValdosta State running back Seth McGill (30) flexes his biceps while being lifted into the air by offensive lineman Ralph Singleton (51) after scoring a touchdown during a game against North Greenville Saturday at Bazemore-Hyder Stadium. 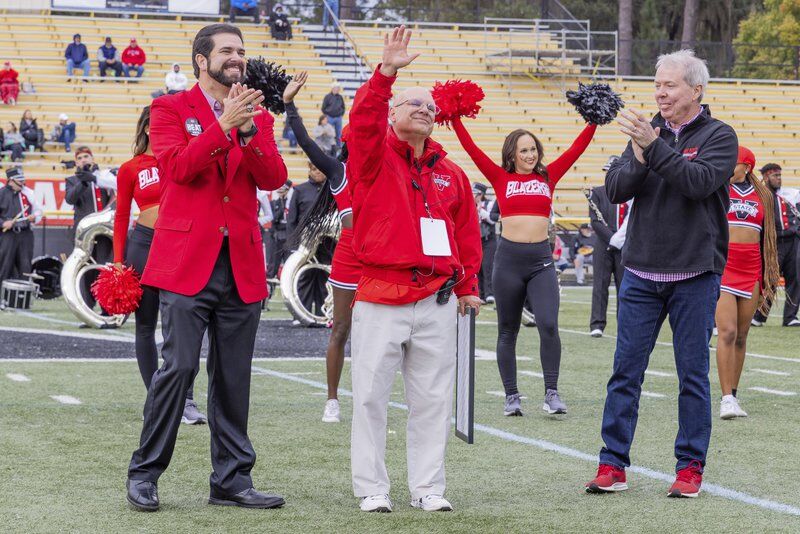 Mary Ann Miller | Special to the TimesValdosta State defensive back Cory Roberts (19) reacts after intercepting a pass by North Greenville's Kaelan Riley during a game Saturday at Bazemore-Hyder Stadium.

Mary Ann Miller | Special to the TimesValdosta State running back Seth McGill (30) carries the ball during a game against North Greenville Saturday at Bazemore-Hyder Stadium.

Mary Ann Miller | Special to the TimesValdosta State running back Seth McGill (30) flexes his biceps while being lifted into the air by offensive lineman Ralph Singleton (51) after scoring a touchdown during a game against North Greenville Saturday at Bazemore-Hyder Stadium.

The Blazers (9-0, 6-0 Gulf South Conference), who admittedly had a lackluster week of practice, looked like it for stretches as they failed to score in the first quarter and made some uncharacteristic mistakes throughout.

“It was an up-and-down practice, so we’ve got to do better. Obviously, we made some mistakes today that we typically don’t but a lot of that was a lack of focus during the week. ... The bright side is we’ve got a really good football team. We didn’t play our best today, obviously, but we won.”

Despite the lulls, they still managed to post 530 yards of total offense led by the playmaking prowess of wide receiver Brian Saunds and running back Seth McGill. The tandem accounted for three second-quarter touchdowns as the Blazers remained unbeaten.

Saunds finished with 15 catches for 220 yards with one touchdown. The 15 catches were the sixth-most in school history, while the 220 yards moved Saunds into third place on the Blazers’ all-time single game reception yards list – moving him past Seantavious Jones, who posted the third (210) and fourth (204) highest marks in school history.

Goff added, “The guy makes play after play after play. He’s a lot of fun to coach. He always wants the football. Even if he’s double-covered, he comes to me and says, ‘Coach, I’m wide open.’ You want guys like that. He lives to play in clutch moments and he wants to carry the team on his back at times. I had no idea he caught 15 balls, but good for him. That was an awesome game.”

McGill only had 15 carries for 39 yards, but scored two of his three touchdowns in the first half after the Blazers went down 7-0 in the first quarter.

McGill’s 2-yard rushing touchdown put the Blazers ahead 28-14 with 11:43 left in the third quarter.

“My O-line was blocking great,” McGill said. “Everything was clicking. Not in the first (quarter), but it started going in the second.”

Given the momentum the Blazers discovered, it appeared the team would pull away, but the Crusaders hung around – scoring for the final time with 5:22 left as Riley scampered for an 18-yard touchdown for the final margin.

The Blazers’ groove came to a halt as Durham threw a pair of curious interceptions – only his fourth and fifth of the season.

Overall, Durham still had an impressive game, completing 27 of a career-high 40 passes for 315 yards with one touchdown. The Jacksonville, Fla. native also ran the ball 11 times for 107 yards in the win.

According to Goff, the miscues came to be from miscommunications between Durham and his receivers. The first interception came as Durham aired a ball right to North Greenville’s Kameron Burton as no Blazer was in the vicinity of the pass. On the second pick, Durham looked for senior No. 1 target Lio’undre Gallimore, who cut off his route short – allowing Burton to step in front for his second interception of the game.

“Two of them were miscommunications,” Goff said. “We had a freshman receiver playing and he adjusted the route one way and (Durham) thought he was going the other way. the other one, L.C. (Gallimore) didn’t complete his route right there which led to a turnover, which was basically a punt on third-and-long. Those two picks were just the quarterback and the receivers not on the same page.”

The Crusaders tied the game at 14 on a 21-yard touchdown from Kaelan Riley to Logan Byrd with 1:13 left before halftime – a 7-play, 61-yard scoring drive.

The Crusaders finished with 258 yards of offense on 50 plays, while the Blazers ran 82 plays on Saturday.

Most of the Crusaders’ damage came on the ground as Cale Swift led the way with 21 carries for 112 yards. Riley got in on the running attack as well with seven carries for 35 yards and two touchdowns. The Crusaders were largely ineffective through the air as Riley completed just 4 of 10 passes for 38 yards in the loss.

Defensively, the Cruasaders were led by Deandre Mack, who had nine total tackles, along with Burton and Ethan Alexander, who finished with eight apiece.

For the Blazers, Jameon Gaskin had a game-high 11 total tackles followed by Mondrell Jefferson’s eight total stops. Nick Moss and Cory Roberts each had five tackles and a half tackle for loss in the win.

Reinhard, who has been at the helm of VSU Athletics for the last 30 years, was pulled onto the field by VSU president Richard Carvajal to receive the honor.

“It’s more than a surprise – I was shocked,” Reinhard said of the honor. “I’m incredibly humbled. I’ve been really, really blessed to work with some really wonderful people here at Valdosta State. When I came here, my plan was to be here three or four years and then three or four turns into 10 or 11. I just love what we’ve done here together as a team. It’s been really rewarding and it’s a great honor and I’m really touched. It’s a tribute to coaches and student-athletes and staff and presidents and everybody that’s really helped us to do the things that we’ve been able to do.”

The Blazers wrap up the regular season next Saturday in Pensacola, Fla., against No. 4 West Florida.

The Argos were the last team to defeat the Blazers, winning 38-35 in the second round of the 2019 NCAA Division II Playoffs.

Two years later, the Blazers will need to vanquish the Argos to lock up the Gulf South Conference championship and clinch the No. 1 seed in the NCAA Super Region Two standings.

“We just had a heart-to-heart in the locker room. There’s not many times you get a chance to be 9-0,” Goff said. “We’ve got to make sure we’re playing really good football from here on out. Next week starts Round 1 of the playoffs, no matter how you look at it. You get a win next week and that’s a conference championship and a first-round bye. If you don’t, you don’t know where you’re going to land in the playoffs. We’ve got to approach this coming week like that and I know the guys – they’re going to be locked in and working hard.”