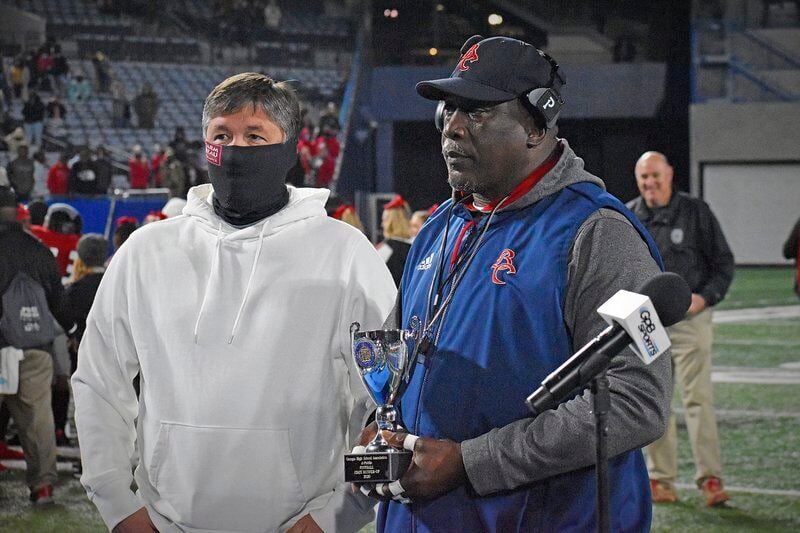 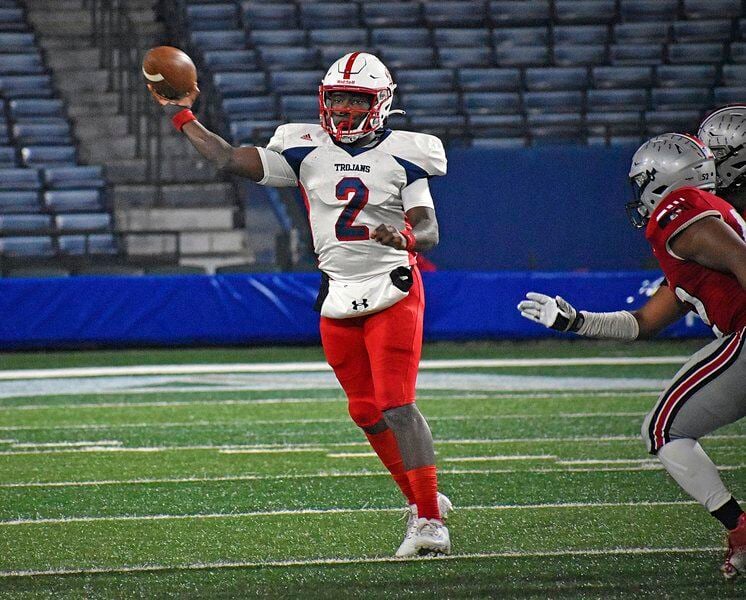 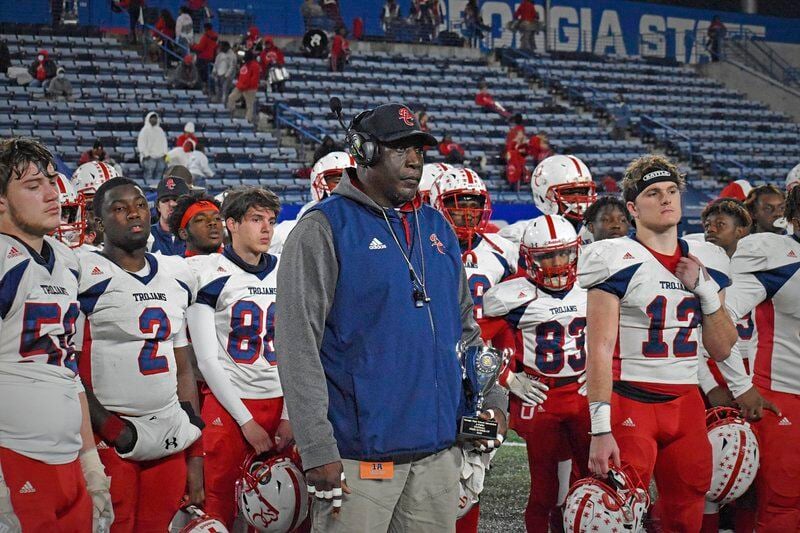 Gerald Thomas III | Special to the TimesBrooks County head football coach Maurice Freeman holds the GHSA Class A State Runner-Up Trophy as he stands with his team after a 27-19 loss to Irwin County Monday in Atlanta. 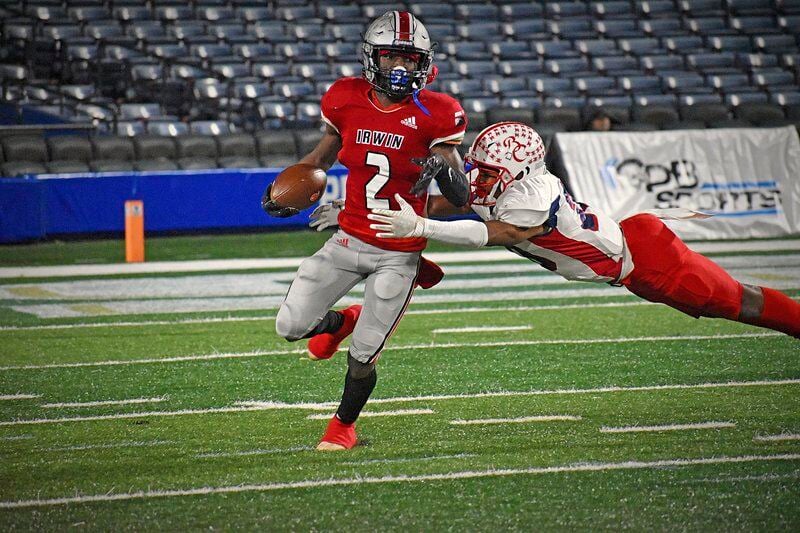 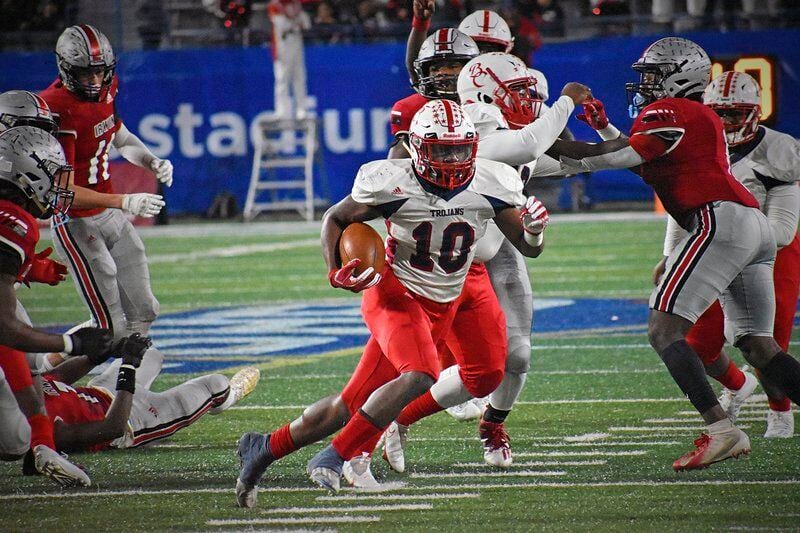 Gerald Thomas III | Special to the TimesBrooks County running back Omari Arnold (10) breaks through a hole in the defense during a GHSA Class A State Championship game against Irwin County Monday in Atlanta. 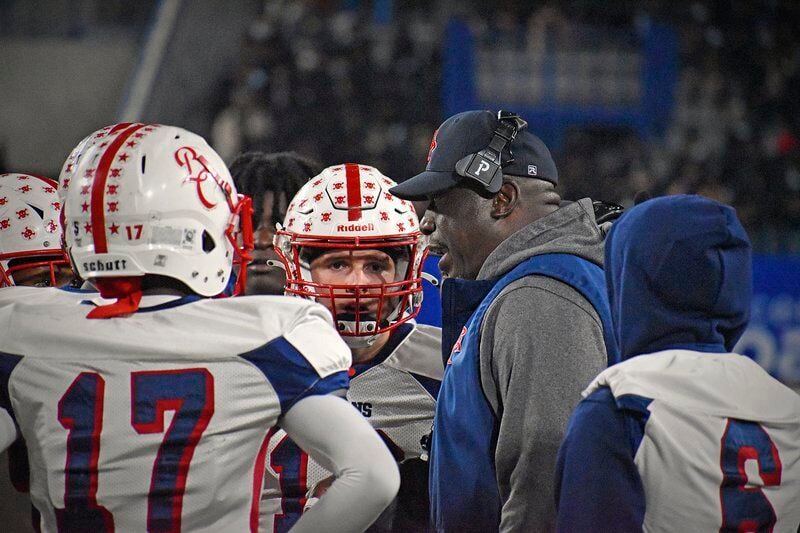 Gerald Thomas III | Special to the TimesBrooks County head football coach Maurice Freeman holds the GHSA Class A State Runner-Up Trophy as he stands with his team after a 27-19 loss to Irwin County Monday in Atlanta.

Gerald Thomas III | Special to the TimesBrooks County running back Omari Arnold (10) breaks through a hole in the defense during a GHSA Class A State Championship game against Irwin County Monday in Atlanta.

The Brooks County Trojans went the distance to get back to Center Parc Stadium in Atlanta, but could not capture the state crown –– losing 27-19 to defending GHSA Class A state champion Irwin County Monday night.

Once the fourth quarter rolled in, Jamal Sanders checked in at quarterback for Ni'tavion Burrus as the senior injured his ankle after taking a sack.

In desperate measures to get a touchdown, Sanders was picked off by Derrick Taylor, who got his second interception of the night as the quarterback tried for a shot into the end zone.

Despite the interception, the Trojans found the end zone as Burrus and Willie Brown connected one more time in the season to bring the score to 27-19 with 34 seconds left in the game.

The Trojans attempted to kick a onside kick but couldn’t get the recovery which was followed by the Indians getting into victory formation to clinch their second consecutive state championship win.

“When we could’ve made big plays, we didn’t and when they could’ve, they did,” Freeman said. "We came out and played a good third quarter and a great fourth quarter, but we got behind in the second quarter. These young men fought like hell down to the last second. I have no regrets. I am happy to wake up every morning and coach Trojan football. I am happy as I can be because we played 15 games, but I am sad that we lost. They represented Brooks County and South Georgia well.”

The running game of Irwin ended up being the main culprit of the Trojans’ problems led by senior running back Gabe Benyard. Benyard scored three touchdowns in the game –– the last of which, a 53-yard touchdown catch from Cody Soliday that put Irwin ahead 20-7 in the second quarter.

Before the half, Omari Arnold would score on a two-yard touchdown run as he fought his way to the end zone to bring the Trojans’ deficit to 20-13 at halftime after Saveon Cason intercepted Soliday as time expired to stop the Indians’ drive.

Out the gate after halftime, the Trojans forced a turnover on downs on the Indians and took over on their own 22-yard line.

But the Trojans’ drive was short-lived as Burrus floated a pass to Jamal Sanders before Derrick Taylor snagged it out the air for the Indians for a pick six to extend their lead to 27-13 with 7:21 left in the third quarter.

The Trojans struck first in the game after they were given a short field when the Indians attempted an onside kick before it was recovered by Derrick Woods on their own 42.

As they made it down to the Indians’ 35, the Trojans faced a third-and-8 situation as  Burrus found Brown on a touchdown pass to grab the first lead of the night.

After that score by the Trojans, the Indians would score 20 unanswered by the way of scores from Benyard.

First, the back scored on a 35-yard touchdown on the Indians’ first drive as they still trailed 7-6 after kicker Evan Ross missed the PAT.

The Indians forced the Trojans to a three and out and received a punt that would set them on Brooks’ 35 as they drove to the two-yard line leading to Benyard’s second touchdown before the first quarter ended.

The Trojans are losing nine seniors, but Freeman is already looking forward to coming back to Center Parc next year.

“The seniors did a great job by showing leadership and fight,” the 26-year coaching veteran said. “I know they’re hurt that we loss this one, but they did everything we asked for. We are going to take a few weeks off to regroup and see if we can play 15 more to come back here next year to make it a habit."