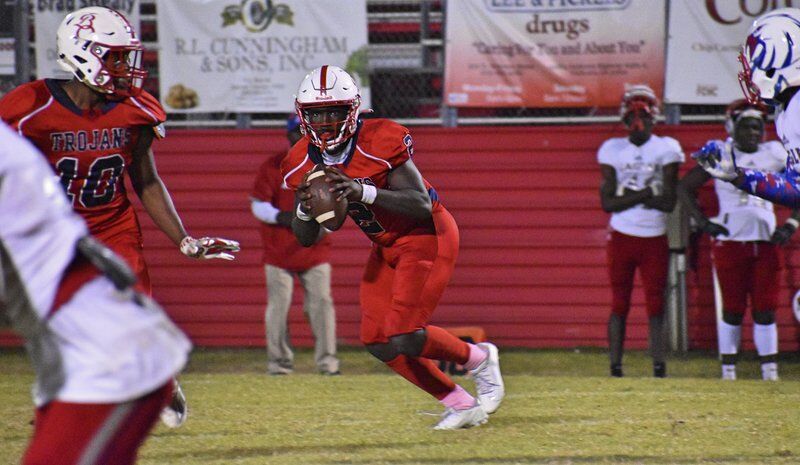 Gerald Thomas III | Special to the TimesBrooks County quarterback Nitavion Burrus rolls out during the Trojan's 63-34 victory against Mitchell County on Friday. Burrus was responsible for seven touchdowns in the game. 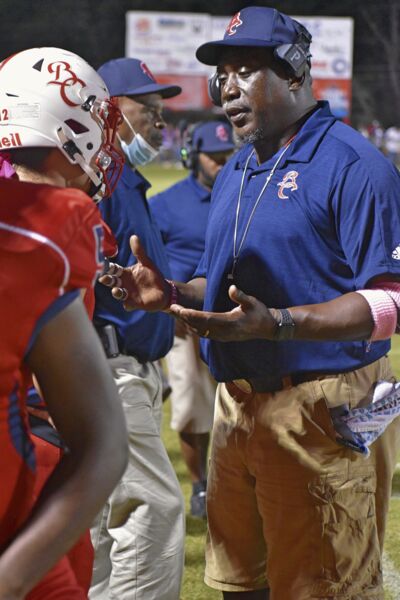 Gerald Thomas III | Special to the TimesBrooks County head coach Maurice Freeman talks with a player on the sidelines during the Trojan's 63-34 victory against Mitchell County.

Gerald Thomas III | Special to the TimesBrooks County quarterback Nitavion Burrus rolls out during the Trojan's 63-34 victory against Mitchell County on Friday. Burrus was responsible for seven touchdowns in the game.

Gerald Thomas III | Special to the TimesBrooks County head coach Maurice Freeman talks with a player on the sidelines during the Trojan's 63-34 victory against Mitchell County.

What had the makings of being a shootout quickly turned sour for the Mitchell County Eagles as they were defeated 63-34 by the Brooks County Trojans.

The 63 points were the most scored by the Trojans since their 2019 matchup against Mitchell County, where they prevailed 63-50.

“It starts with the offensive line,” Burrus said after the game. “They grew up tonight and showed that they could block, and it helped me out.”

After keeping their drive alive on a successful fourth-and-five Quentavious Hunter scramble, he scored a few plays later on a two-yard run with 7:14 to go in the first quarter.

But it did not take the Trojans to respond.

Taking less than a minute off the clock, Omari Arnold rumbled his way to the end zone on a 54-yard breakaway run with 6:16 left in the first quarter.

Hunter had to check out of the game after injuring his back on a scramble for the Eagles.

But Daymion Williams came in and successfully did his job at quarterback, finding Malcolm Jones for a 12-yard receiving score.

After a face mask penalty, Burrus called his own number on the four-yard line, running it up the gut for a score to grab a 14-12 lead to end the first quarter.

Hunter returned to action for the Eagles on the next drive, but they could not get any points after they coughed up the ball, with Jeremiah Henderson jumping on it for the Trojans on their own 21.

Burrus looked to his right and saw Jamal Sanders and connected with him through coverage as the receiver sped down the sideline, juking to his left to get in the end zone on a 51-yard receiving touchdown.

The Eagles were pushed to a third-and-30 predicament after Hunter found Willie Williams on a 70-yard touchdown pass that was called back due to holding.

They were forced to punt and then play got physical.

On an Omari Arnold punt return, Camron Priest was flagged on a blindside block before the play ended with Malcolm Jones slamming Arnold out of bounds and being called for a personal foul, causing Arnold to not play much afterwards.

As a result, the big boys got to touch the ball some.

The ball was popped out of the Trojan’s James Huewitt hands and landed with offensive tackle Damian Gee, as he was pushed nearly 20 yards by his teammates to the 14-yard line.

Burrus used that momentum and scored his second rushing touchdown of the night from three-yards out to give Brooks a 28-12 lead with 5:06 left in the first half.

Eagles’ Hunter and Williams would not be denied this time as they got a 69-yard touchdown score with 3:29 left in the half to get within eight after Hunter ran in the two-point conversion.

On the next kickoff, Sanders fumbled and lost the ball, allowing the Eagles to take over on the 46.

Plays later, Hunter and Jones scored again on a 20-yard 50-50 ball over a Brooks’ defender.

But Brooks got the last laugh for the half.

They lined star running back Arnold at wide receiver before Burrus gave the Eagles a taste of their own medicine.

Arnold went up and over Mitchell County’s Tony Burkes for a 17-yard catch to give the Trojans a 36-28 lead at the end of the first half.

Trojans head coach Maurice Freeman was surprised by the turn of events that took place with his team in the first half.

“The offense had a horrible week and the defensive had a great week at practice,” he said. “The offense was hitting on all cylinders. They gave our defense hell in the first half.”

The Trojans were a different team when the second half rolled around.

They outscored the Eagles 27-6 in the final two quarters.

“Defense has been helping us out all season, so I told the offense that we need to come back and be on fire to help them out,” Burrus said.

They received the ball first in the second half and on that drive, Burrus hit the weak left side of the field for a 19-yard touchdown run.

The Trojan defense decided to get stingy when they came on the field.

They forced a three and out before Hunter’s punt was met by defensive end J’Shawn Baker’s hands when he blocked then scooped and scored the ball for a touchdown to crack 50 points on the board with seven minutes left in the quarter.

“I was feeling good the whole time. I knew their game plan and knew they could not block me,” Baker said. “Coach Freeman told me at halftime to tell the DB’s to keep their heads up. Sometimes their confidence can get low, so we had to pick them up to make us better.”

As the third quarter was coming to an end, Burrus got another touchdown with 51 seconds, getting the pigskin to Willie Brown for a 51-yard touchdown.

After a blocked punt by Derrick Woods for the Trojans early in the fourth quarter, Burrus got his seventh and final touchdown on the very next play after Tramaine Demps caught his pass in the back of the end zone before tapping his feet in bounds, being the fourth receiver to catch a touchdown.

“I sat my receivers down and told them to trust and believe in me,” Burrus said. “I told them to just give me time and I’ll get them the ball and they came out and played for me.”

Freeman praised his defensive line for staying firm and forcing turnovers in the second half.

“We got a couple of turnovers and got control of the game,” Freeman said. “The defensive line played great the whole game and were swarming around the quarterback. If they keep playing like that, the back seven will catch up.”

After getting 27 unanswered scored on them, Daymion Williams passed to Willie Williams for 20-yard touchdown to bring their deficit to 29 with 6:50 to go.

Raising their record to 4-0, Freeman does not want his team to get complacent and be ready for opponents who have Brooks circled on their schedules.

“We’re No. 1. Who’s No. 1 shooting at,” Freeman said. “We came out a little bit flat thinking they were going to lay down because they looked lethargic in film. We’re going to have to defend this season.”