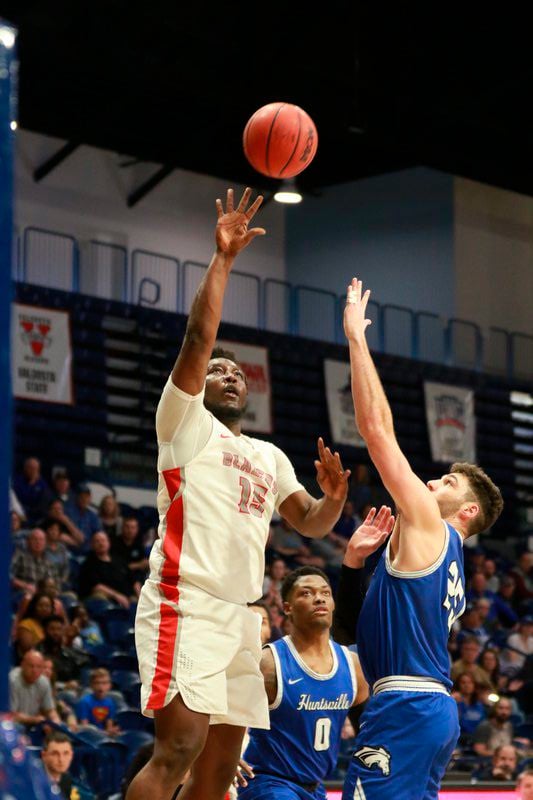 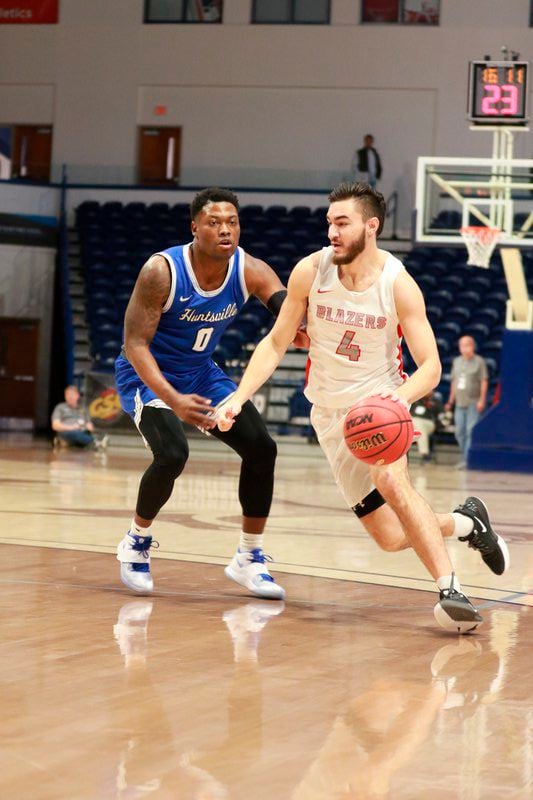 The NABC recognizes the best men's collegiate basketball student-athletes in the division.  Selected and voted on by member coaches of the NABC in NCAA Division II.  Guillozet and Lee's Ryan Montgomery are the only two athletes from the Gulf South Conference to earn first team all-district honors.  West Alabama's LaJuan Hardy earned second team honors along with Jones.  Guillozet will move onto the national ballot for NABC All-America consideration.  Click on the link to the right for the complete list of the all-district honorees.

Guillozet, a native of Greenville, Ohio, capped an outstanding career as he was named Gulf South Conference Player of the Year, becoming the third Blazer in the last four years to be named GSC Player of the Year and the fifth overall in the history of the program.  He also has been named to the Bevo Francis Top 50 Watch List.  In addition, he earned D2CCA First Team All-Region honors.  He also earned spot on the Gulf South Conference All-Tournament team.

He helped lead VSU to its fourth-straight Gulf South Conference regular season title and a school-record 19-game winning streak during the season as the Blazers finished 26-4 on the year.  Guillozet also was named to the GSC All-Tournament Team as he helped lead the Blazers to the championship game.

Guillozet became the 27th player in school history to score 1,000 career points and accomplished it in under three years.  He also tallied 500 career rebounds as he achieved both in a game on Jan. 4 at West Alabama.  Guillozet finished leading the team in scoring at 16.0 points per game this season.  He was 181 of 343 from the field (.528), while he drained 41 triples in 103 attempts (.398) and went 77 of 119 from the line (.647).  He averaged a team-high 8.2 rebounds per game, while he recorded 114 assists to lead the team with 43 steals and ten blocks.  Guillozet had seven double-doubles on the year, starting all 30 games and recording 24 games in double figures.  He was named GSC Player of the Week three times this season.

For his VSU career, Guillozet, who transferred to VSU from West Liberty in 2017, helped lead the Blazers to three Gulf South Conference regular season titles, a 76-16 record overall and a 52-8 mark in the GSC.  He earned academic all-conference honors last season and is a two-time Google Cloud Academic All-District as selected by CoSIDA honoree.

Jones, a native of Lake City, Fla., had an outstanding two-year career for the Blazers and a great senior campaign.  He earned first team all-conference honors as he finished second on the team in scoring at 15.3 points per game.  Jones earned a spot on the GSC All-Tournament team helping the Blazers to the conference tournament championship game.  He tallied the Blazers' first triple-double since 2012 this season with a career-high 16 rebounds, 11 points and ten rebounds in a win over Brewton-Parker (11/12/19) earning GSC Player of the Week honors for his efforts.  Jones finished second on the team in rebounding at 7.3 per game and scored 444 points with 211 rebounds.  He went 166 of 316 from the field (.525) for fourth in the league in field goals made and was 92 of 115 from the line for a .800 clip. He recorded 79 assists with 18 blocks and 29 steals. Jones had 26 games in double figures for most on the team and had seven games of 20 or more points.

About the National Association of Basketball Coaches

Located in Kansas City, MO, the NABC was founded in 1927 by Forrest "Phog" Allen, the legendary basketball coach at the University of Kansas.  Allen, a student of James Naismith, the inventor of basketball, organized coaches into this collective group to serve as Guardians of the Game.  The NABC currently has nearly 5,000 members consisting primarily of university and college men's basketball coaches.  All members of the NABC are expected to uphold the core values of being a Guardian of the Game by bringing attention to the positive aspects of the sport of basketball and the role coaches play in the academic and athletic lives of today's student-athletes.  The four core values of being a Guardian of the Game are advocacy, leadership, service and education.  Additional information about the NABC, its programs and membership, can be found at www.nabc.org.