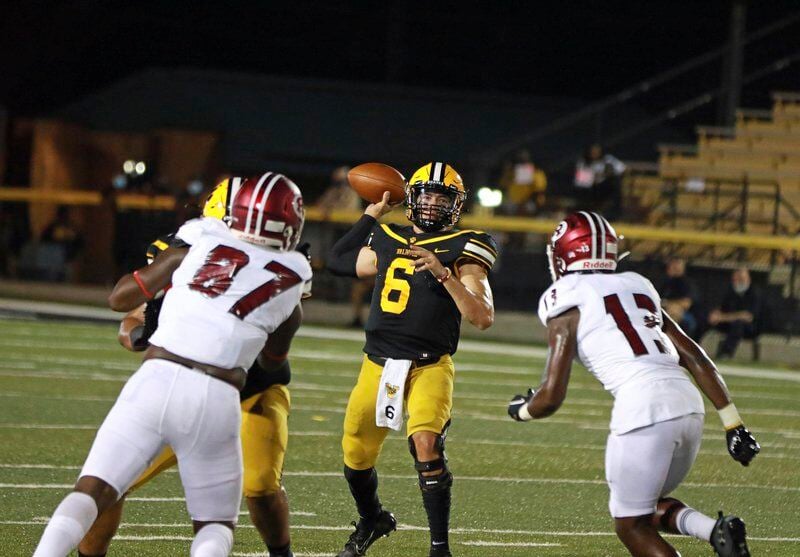 Shane Thomas | The Valdosta Daily TimesValdosta quarterback Jake Garcia (6) throws during the team's season opener against Warner Robins Sept. 4 at Bazemore-Hyder Stadium. Garcia was declared ineligible by the GHSA on Sept. 29. After having his reinstatement denied by the GHSA, Garcia has withdrawn from Valdosta and will transfer to Grayson High School. Garcia will be able to play immediately. 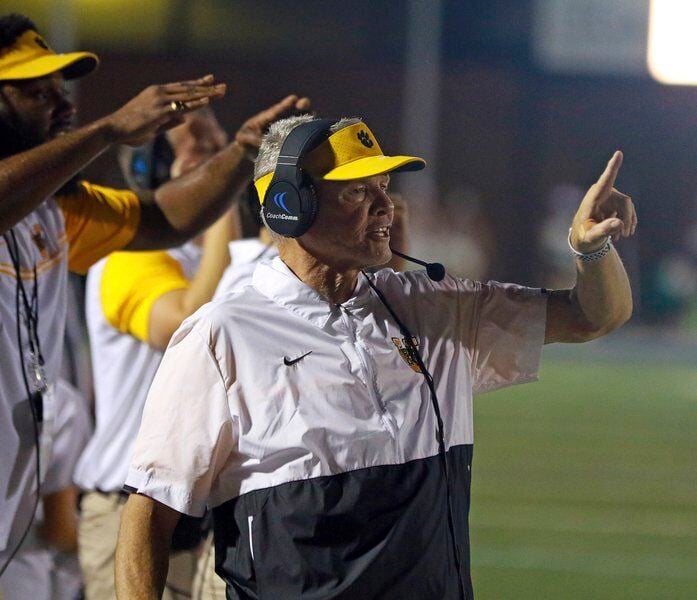 Shane Thomas | The Valdosta Daily TimesValdosta head football coach Rush Propst gestures to a player from the sideline during the team's season opener against Warner Robins Sept. 4 at Bazemore-Hyder Stadium.

Shane Thomas | The Valdosta Daily TimesValdosta quarterback Jake Garcia (6) throws during the team's season opener against Warner Robins Sept. 4 at Bazemore-Hyder Stadium. Garcia was declared ineligible by the GHSA on Sept. 29. After having his reinstatement denied by the GHSA, Garcia has withdrawn from Valdosta and will transfer to Grayson High School. Garcia will be able to play immediately.

Shane Thomas | The Valdosta Daily TimesValdosta head football coach Rush Propst gestures to a player from the sideline during the team's season opener against Warner Robins Sept. 4 at Bazemore-Hyder Stadium.

After being twice ruled ineligible at Valdosta, Garcia has been granted eligibility to play elsewhere by the Georgia High School Association.

Garcia only played in one contest for the Wildcats, a 28-25 victory against Warner Robins that has since been vacated. Garcia passed for 322 yards and two touchdowns in the victory, helping Valdosta come from a double-digit deficit to beat the 2019 5A runner ups.

“Well, he’s not eligible here,” Valdosta head coach Rush Propst said on Tuesday. “I guess by GHSA rule, he’ll be eligible if he makes a bonafide move to another school. You’ll have to ask the GHSA. It doesn’t make any sense but he’s not the only one that’s done that.”

Propst cited other student-athletes that have done the same thing in 2020, with former McEachern quarterback Carlos Del Rio transferring to Grayson and then to Cartersville and linebacker Chief Borders from McEachern to Carrollton, then to Heard County.

Garcia was originally granted eligibility with the Wildcats but after an ESPN story broke about his parents legally separating for him to gain eligibility, the GHSA decided to review their decision.

That’s when they deemed him ineligible, vacating the win against Warner Robins and sending the Wildcats into a downward spiral.

“We’re in unprecedented times,” Propst said about the situation. “We’re in a pandemic. A very strong pandemic. With the SEC and NCAA doing what they’re doing. These big power conferences in college football doing what they’re doing, you would think that these high school associations would adhere to that. Knowing that we’re in a COVID pandemic unlike anything we’ve seen. But they’re going to stick to what they think.

Moving forward for the Wildcats will certainly look a little different this week.

According to Propst, due to contact tracing, roughly 10 players are quarantining –– not because they are sick, but to take precautions in the event that they came into contact with a teacher that has tested positive for COVID-19.

This the latest chapter in what is seemingly, a weekly episodical tale of misfortune for Valdosta but the Wildcats still move forward, potentially missing four starters on offense and a starting cornerback.

“This football team seems to get slapped every week,” Propst said. “And it’s tough. We’re not the only ones. Lowndes is going through it. Colquitt is going through it. Tift has gone through it. It seems like it’s raised its ugly head here in the last few weeks, but all I know to do is go to work everyday, coach the kids that are with me here and move forward and play a football game Friday night.”

The Wildcats are set to host Westside (Fla.) tonight in their final non-region game of the season.

The Wolverines are 3-2, averaging nearly 23 points per game but have scored 30 points or more in three of their last four contests.

They’re powered by senior quarterback Ditannon Otis, a 6-foot-3, dual-threat that can burn teams with his legs and with his arm.

The last quarterback that Valdosta faced that stood 6-foot-3 and had dual-threat talent, burned the Wildcats for four touchdowns in Lowndes’ Winnersville Classic victory.

Still, there is resolve from the loss against the Vikings.

The second half of that game gave a sample of what could be for the 1-3 Wildcats. They excelled on both sides of the ball during the final two periods.

Defensively, the Wildcats held Lowndes scoreless for 29 minutes of game clock, often swarming to the ball and meeting runners at the line of scrimmage.

In an ever-changing world, the Wildcats have struggled to find rhythm.

With one game remaining before region play opens, Valdosta will need to put the pieces together and put on a strong performance.

“Kids are pretty resilient, they really are,” Propst said about his players. “The hard thing is the lack of routine. There’s not been a routine. We had the situation with Jake Garcia. We’ve lost two games that we felt pretty good about winning. So instead of sitting here at 4-2, now we’re 1-3. All that’s in the past, there’s not a thing we can do about it. So we’ve just got to move forward and do what’s best going forward. I think the quicker we get back in the stadium and play a football game the better off we’ll be.”

The Wildcats and Wolverines face off at 8 p.m. at Bazemore-Hyder Stadium.