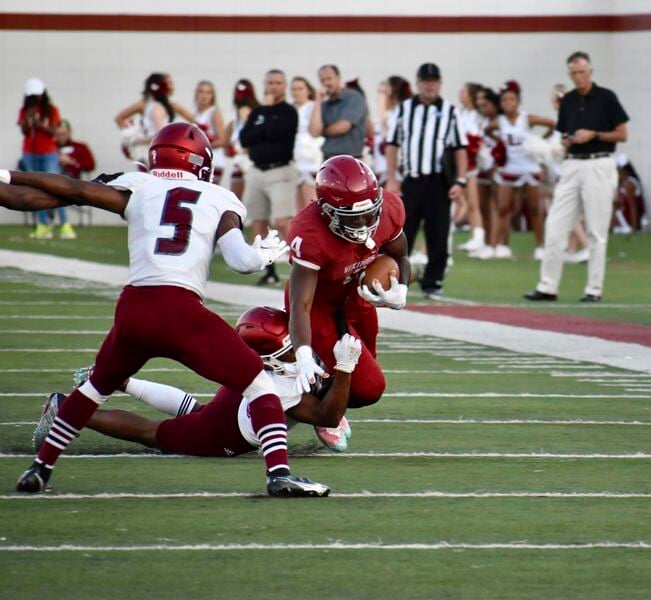 Gerald Thomas III | Special to the TimesLowndes running back Chase Belcher (4) is brought down by a Warner Robins defender during the team's spring game Friday at Martin Stadium. 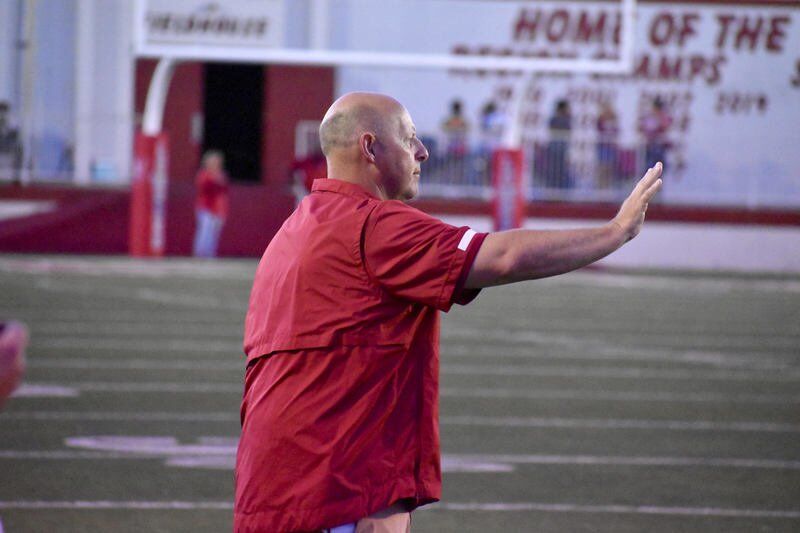 Gerald Thomas III | Special to the TimesLowndes head football coach Jamey DuBose gestures to his team on the field during a spring game against Warner Robins Friday at Martin Stadium. 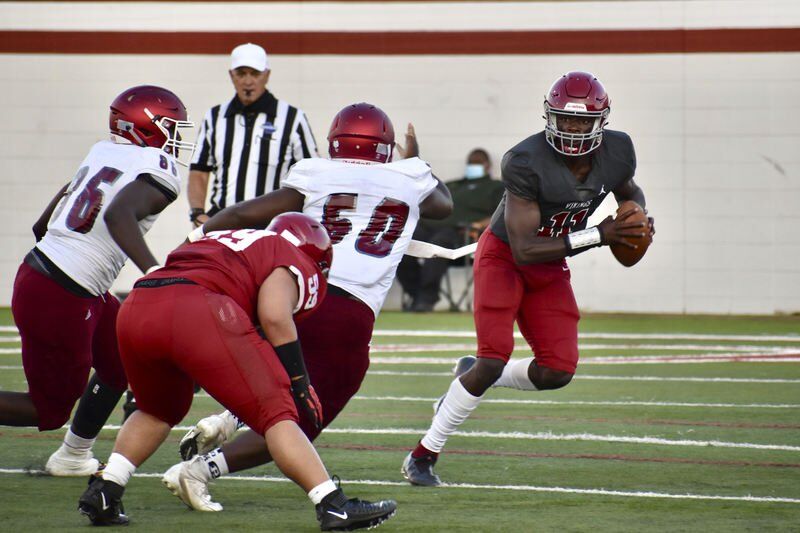 Gerald Thomas III | Special to the TimesLowndes quarterback Jacurri Brown (11) rolls to his left during the team's spring game against Warner Robins Friday at Martin Stadium.

Gerald Thomas III | Special to the TimesLowndes running back Chase Belcher (4) is brought down by a Warner Robins defender during the team's spring game Friday at Martin Stadium.

Gerald Thomas III | Special to the TimesLowndes head football coach Jamey DuBose gestures to his team on the field during a spring game against Warner Robins Friday at Martin Stadium.

Gerald Thomas III | Special to the TimesLowndes quarterback Jacurri Brown (11) rolls to his left during the team's spring game against Warner Robins Friday at Martin Stadium.

VALDOSTA –– The No. 8 Lowndes Vikings concluded their spring circuit by completing a scrimmage against No. 3 Warner Robins Demons, the defending GHSA 5A state champions.

The two powerhouse programs faced each other at Martin Stadium Friday, putting all the things that they have been practicing to the test.

From my point of view, the Vikings had a fair showing despite the many losses they had on both sides of the ball from graduation.

Here are my takeaways from their 2021 spring game:

Run, Vikings, Run – As if we have to tell them that in the first place. They are already a run-heavy team. But senior Chase Belcher being moved from outside receiver to running back is a huge dynamic to the team.  In his first ‘game’ from the backfield, he would score two touchdowns, running hard and shedding Demon tacklers. I think it is safe to say that he will be all good at his new position with his mixture of power and speed in the open field. He also has sophomore Jacarre Fleming as his running back. Fleming has a big burst of speed, the likes of last season’s Justin Lee. Fleming would take off for a lengthy touchdown in the third quarter of the game.

“It was easier than I thought,” Chase Belcher said. “I feel like I did good, and all my coaches said the same. It is always room to get better though. It felt good to score in a different way opposed to catching the ball.”

Same ol’ Concrete Curtain – At the beginning of the game, Demons running back Malcolm Brown gave the Vikings' defense trouble but one thing they never did was break. The Vikings allowed no scores while also having a stand in the red zone. Senior cornerback Tylar Belcher made his presence known, sticking a Warner Robins runner, forcing a fumble that would get recovered by the Vikings for a score.

“Right now, we’re just seeing who can do what and evaluate everybody,” Tylar Belcher said. “I had a forced fumble that put us in a good situation, and we balled after that. I am looking for us to have that bond with each other and getting closer. No one can stop us after that. My last spring game as a high schooler was excellent. It’s time to hit the road, baby.”

Ditch the Pass – As noted above, the Vikings are not shy about running the ball all game. This game saw rare passing from the starting unit. After a Jacurri Brown under-thrown pass to Khris Thomas that would be intercepted, the Vikings starters would not pass until the third quarter, but it did not make it significant difference. The Vikings should focus a lot on Thomas and Justin Barron this summer so they can be two dimensional when need be, kind of how they were with Dominque Marshall and Chase Belcher catching passes last season.

Fountain of Youth – With only six starters returning for the Vikings, I saw jitters out there on the turf –– especially on the first offensive drive. The Vikings went three-and-out along with the defense allowing the Demons to march all the way to the red zone. When Fleming got his first carry, he fumbled and turned the ball over. The offensive line was also young for the second consecutive season. This is a young team, but the potential is there as they fared well against the defending champions.

“Our young O-line hadn’t played a snap in a real varsity game, but they were blocking their butts off,” Jacurri Brown said. “Chase was a big story. He was toting that thing today. Our defense and offense are young, but we rolled with the game plan. Now we’re about to build up in the weight room and go into 7-on-7 and watch some film to get ready for the season.”

The Vikings will now prepare for summer workouts and OTAs since spring is over.

Whatever they struggled to execute should be addressed if they want another deep playoff run once the season starts in August.

But all in all, the Vikings overcame the youthfulness and put up a performance that can be built upon heading into the future.

Gerald Thomas III is a special contributor to the Valdosta Daily Times.