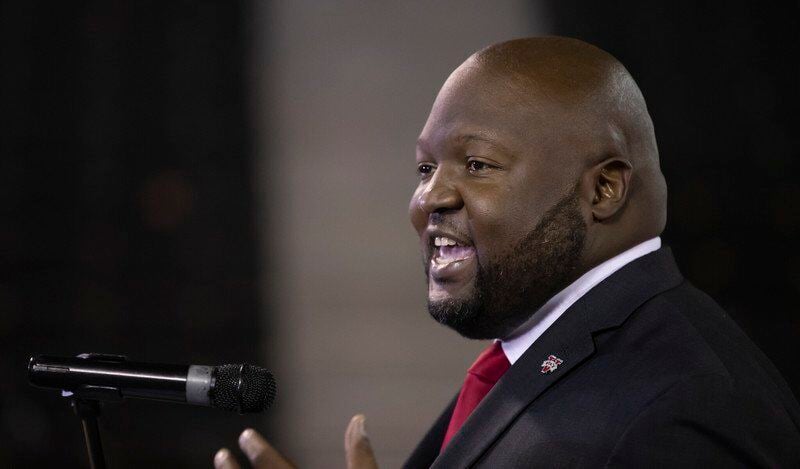 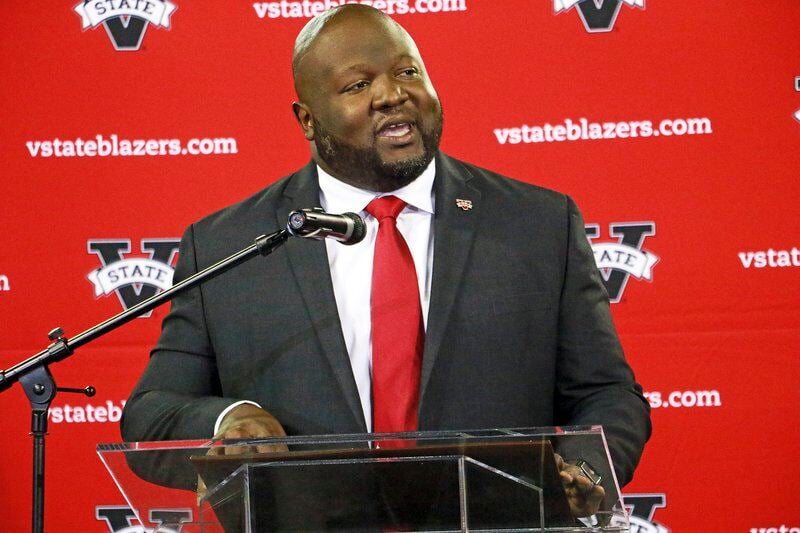 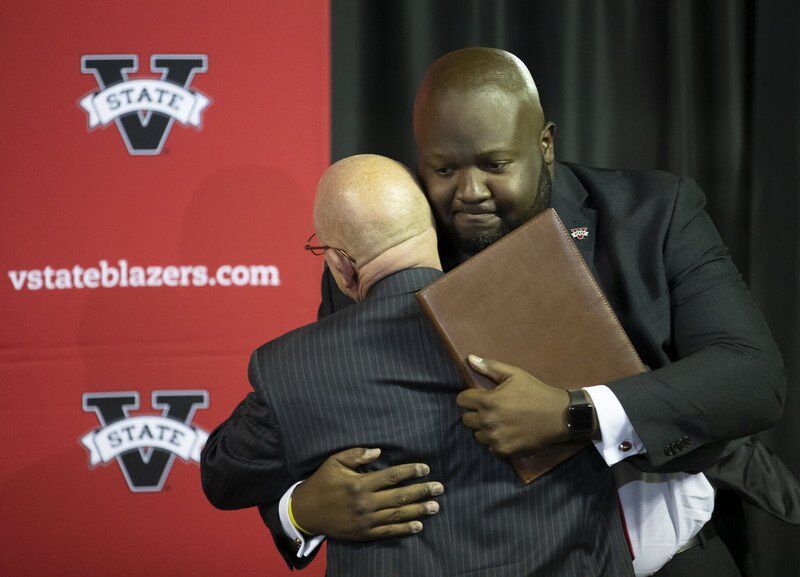 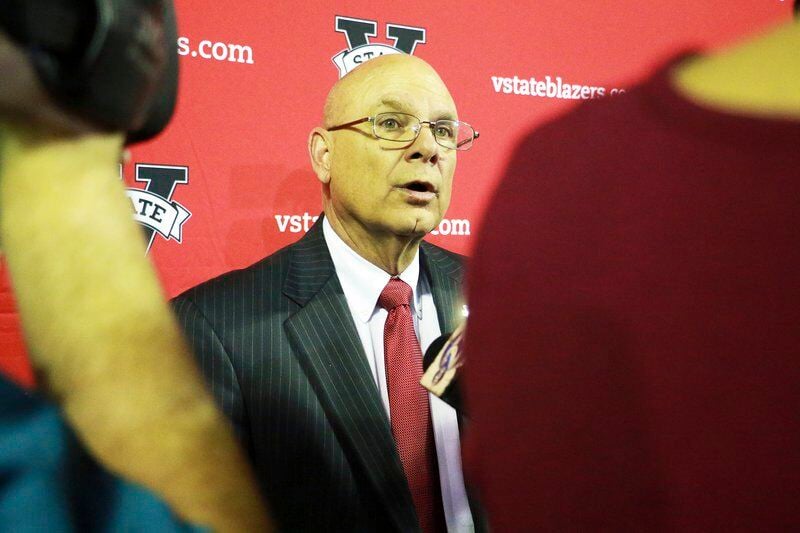 VALDOSTA – For the first time in 40 years of Valdosta State football, the Blazers will have a Black head coach.

"This is special," Jackson said. "This is right up there with the birth of my daughter (Harmony). Getting an opportunity at a place like this with the tradition we have here, it's just not normal. For me to get that honor bestowed upon me, it just makes me very emotional.

"The people here are very genuine. I've really appreciated that. I'm just honored to be the coach here and the reception I've gotten on social media, in person – it's all been positive in the same. I think that's going to get us off to a good start."

Jackson comes to Valdosta from Colorado Mesa University, where he led the Mavericks to a 10-3 record over two seasons – including an 8-2 record this past season.

Valdosta State is the second football program to make a historic coaching hire in the last two months as Jackson joins Valdosta High School head football coach Shelton Felton as the second man of color to be named head coach of a football powerhouse in Valdosta.

"There's not a lot of people that look like me that get the opportunities like this," Jackson said. "Normally, people that look like me unfortunately get broken jobs. They get jobs that are 0-for the year before and get told to fix it. I just got a top-two job and I'm the first Black head coach here and there's not a lot of Black head coaches outside of HBCUs in Division II.

"It's for the culture and we take a lot of pride in that. The same way we coach players and take a lot of pride in their development and their growth is the same responsibility I feel like I have with that. We're going to try to do an excellent job because I'm not the best one. There's a lot of other guys that haven't gotten this opportunity that deserve it. I think if we do well in the moment, that may open some doors for them."

The Blazers and Director of Athletics Herb Reinhard moved quickly to find their next head coach following former coach Gary Goff's sudden departure for Division I McNeese State less than 24 hours after the Blazers' 58-17 loss to Ferris State in the NCAA Division II Championship game Dec. 18.

As the team flew back to Valdosta empty-handed and disappointed, Reinhard made a promise to the players.

"About three weeks ago, I stood before a group of young men in the aisle on a plane and told them that they had my word and the word of the university that we would go and aggressively and boldly look for the finest head coach to come lead the program and build on the foundation that Valdosta State University Blazer football has," Reinhard said. "I stand before you today very confident that we have found that gentleman.

"Two weeks ago, I had never heard of Tremaine Jackson. I was sitting in my office, talking on the phone, going through countless e-mails, looking at countless resumes, going through who in the world are we going to bring here to keep this thing going."

Among those countless resumes was Jackson's, which Reinhard said he put in the "good stack" with the other top candidates.

Then, out of nowhere, Reinhard received some intel on Jackson from former VSU assistant coaches Dana Holgorsen and Doug Belk.

Holgorsen currently serves as the head coach at the University of Houston, while Belk serves as Holgorsen's defensive coordinator.

"Both of those individuals, while preparing for a bowl game, reached out to us and said, 'You need to take a really good look at Tremaine Jackson,'" Reinhard said. "That meant something. Number one, here are individuals that I respect. They have strong ties to Valdosta State. They care about Valdosta State and they took the time during bowl preparation to reach out because they had a message that they wanted us to hear."

As fate would have it, as the Cougars were preparing for the Birmingham Bowl against Auburn, Jackson happened to be in Houston watching the Cougars practice when Belk asked Jackson if he would be interested in the Blazers' head coaching job.

"I said, 'Well, I'd walk backwards from Houston to Valdosta, Georgia if (they'd have me)," Jackson said. "Why I wanted to be here was because of the brand, the history, the tradition, the name recognition of Valdosta State. Not just Blazer football, but Valdosta State University.

"I also wanted to be here because you have a chance to compete for national championships year in and year out. Before the season even starts, everybody knows the Blazers are going to be somewhere in the mix. I wanted to experience that. I came here because of Mr. Reinhard. He's picked four guys to go and compete for national championships and I thought to myself, if he picks me, I must have a chance."

Jackson's coaching career spans 16 years, having started as a defensive line coach at Texas A&M-Kingsville in 2006.

As a player, Jackson began his college career at Louisiana-Monroe before transferring to Texas Southern for his final junior and senior seasons.

When asked what brand of football Blazer fans can come to expect, Jackson promises to bring a style of play that isn't too far removed from what fans have been accustomed to seeing in recent years.

"We're going to be physical, we're going to be hard-nosed, we'll have an offense that can still light up the scoreboard," Jackson said. "We'll have a defense that loves to run around and hit people and knock people completely out. ... Most of all, we'll have a defense that can prevent free points and take the football away to give our offense better opportunities. We'll have a special teams unit that will attack in all phases and win the field position battle. Those are a couple things that you guys can expect to see us do."

More important than the on-field product, Jackson brings a reputation as a star recruiter and a champion of academic excellence.

With classes still out for the winter break, Jackson has not been able to meet the team he inherited Thursday outside of Zoom meetings.

Classes resume Jan. 10 and Jackson has already made considerable efforts to connect with the team. According to the Blazers' new leader, the goal for the returning Blazers is to finish the mission they fell short of in the national championship game.

"I told them I love them. I said, 'I don't even know you yet, but I love you. You might find that weird, but I truly, truly love you. You're accepting me. You're giving me an opportunity to come coach you,'" Jackson said of his first message to the team when he was hired. "I feel like I have a responsibility as a coach to speak truth into people's lives. We don't take that lightly at all, and I told them we're going to do it step-by-step together.

"What's been impressive is the text messages that they've sent me wanting to finish the mission. It's my responsibility to help them finish that mission. They didn't like what happened to them on the 18th, but they're willing to go back through the process day-by-day, welcome us and our new staff into helping them get back to that point. That's been awesome."