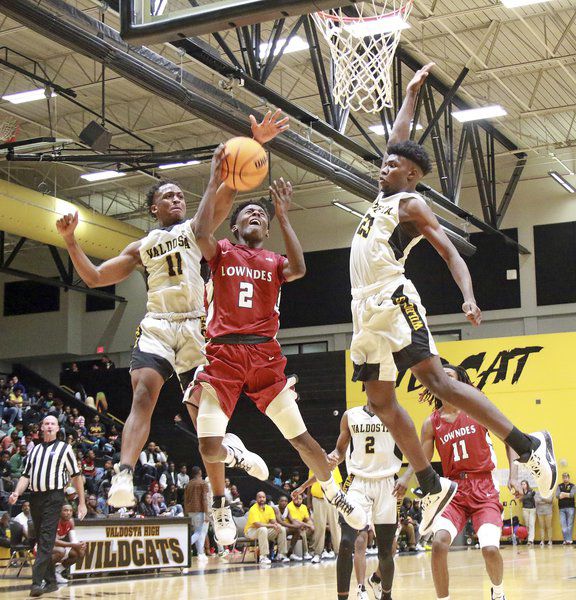 Shane Thomas | The Valdosta Daily TimesLowndes guard Jacques Williams (2) has his shot challenged at the rim by Valdosta's Stanley Haliburton Jr. (11) and Jacquez Anderson (23) during the second half of a game on Saturday. 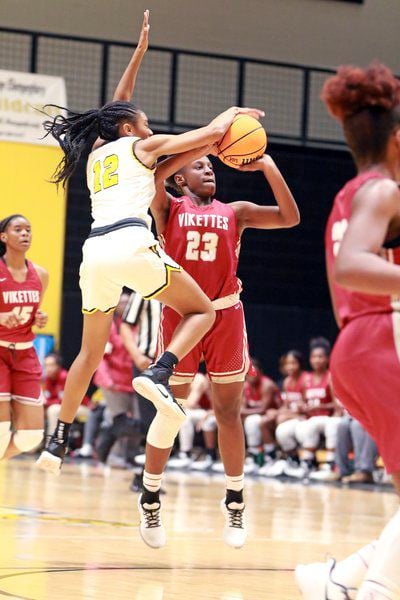 Shane Thomas | The Valdosta Daily TimesLowndes guard Jacques Williams (2) has his shot challenged at the rim by Valdosta's Stanley Haliburton Jr. (11) and Jacquez Anderson (23) during the second half of a game on Saturday.

VALDOSTA –– The Valdosta High boys and girls basketball teams picked up a sweep against the Lowndes Vikings in their first meeting of the season on Saturday.

Struggling against the length, athleticism and aggression of the 'Cats, the Vikings never got on track as the 'Cats feasted on a rash of turnovers that persisted throughout.

Defense set the tone early for the 'Cats as they ran the Vikings off the 3-point line and clogged the paint to make driving lanes difficult to navigate.

Valdosta led by as many as 40 points in the game and held a 68-30 advantage after three quarters.

Ricky Brown, Melvin Smith and Dorrien Douglas each had 14 points to lead Valdosta. Allin Floyd added 11 as the 'Cats extended their winning streak to four games.

Jacques Williams led the Vikings with 10 points, Paul Montgomery added eight and Diego Fernandez had six for the Vikings, who have dropped two of their last three games.

The Lady 'Cats weathered an early push by the Vikettes and finished strong in a 61-47 win in the opener.

Leading 29-20 in the second quarter, Valdosta withstood a 9-0 run to close the first half to go into the locker room tied at 29.

Turnovers hurt the Lady 'Cats much of the third quarter as Lowndes stayed connected. Down by a point with seconds remaining in the third, the Vikettes were in a good spot but couldn't quite seize the momentum as a 12-foot jumper by Ja'Nya Ferguson took a high bounce off the back rim and dropped in at the buzzer to put Valdosta ahead 40-37 heading into the fourth.

Lowndes opened the fourth with six quick points to take a 42-40 lead on a free-throw line jumper by Kiersten Graham with 6 minutes to go in the game. Unfortunately for the Vikings, the Lady 'Cats had an answer.

Freshman Essence Cody worked inside and scored plus the foul to put Valdosta back ahead by one with 5:51 to play. The three-point play keyed a 14-2 run that turned the game decisively in Valdosta's favor. Mikeria Carter found Cody underneath for a layup before Ja'Mya Johnson assisted Amiya Allen on the fast break to give Valdosta 57-44 lead with under a minute to play.

A late rash of turnovers by the Vikettes seemed to give the Lady 'Cats a gust of wind in their sails to pull away with the victory.

Cody led Valdosta with 21 points while Johnson and Carter each poured in 13 points as Valdosta improved to 6-2 on the season.

The Vikings suffered their first loss of the season after starting the year 5-0. Faith Johnson led the Vikettes with 15 points in the loss.