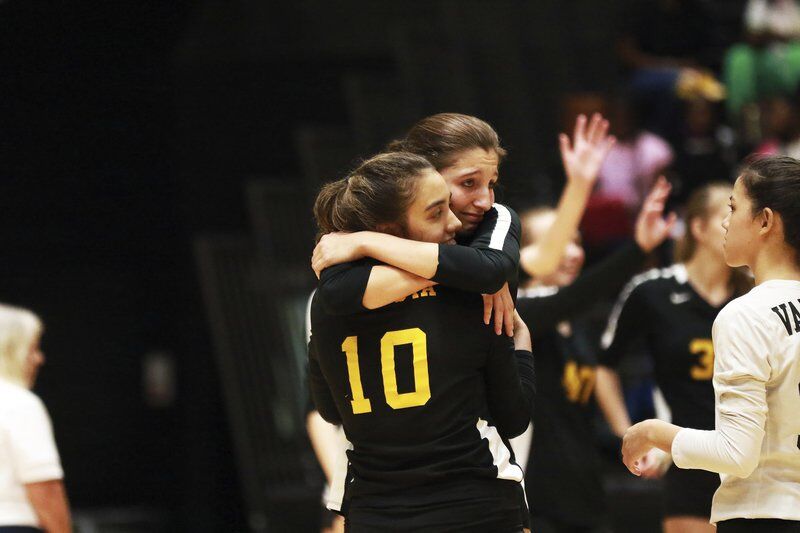 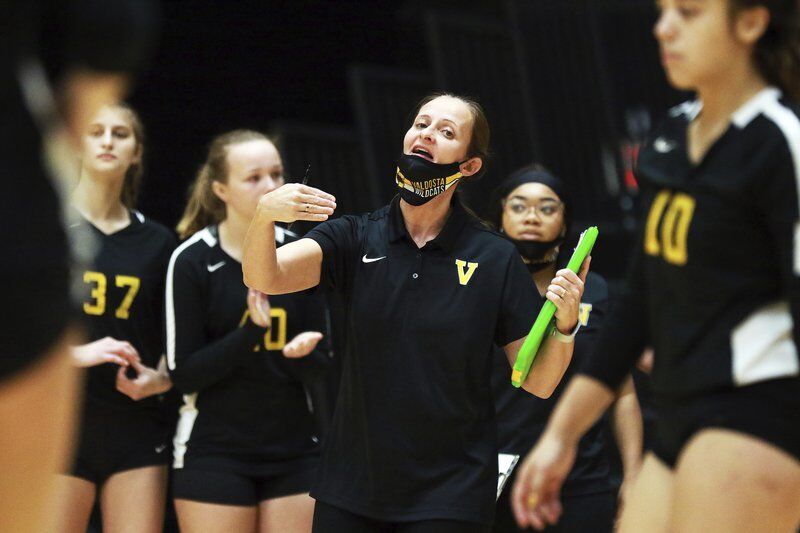 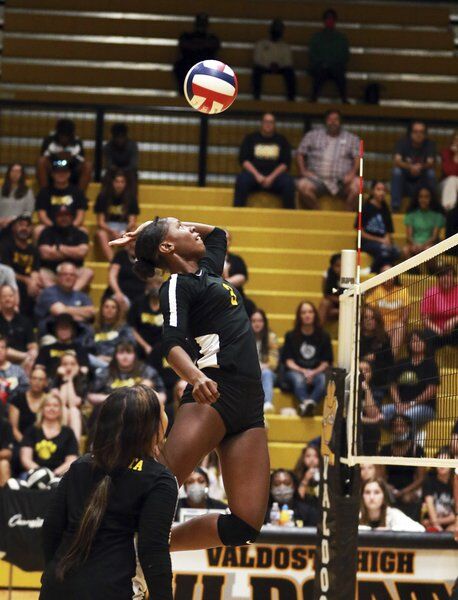 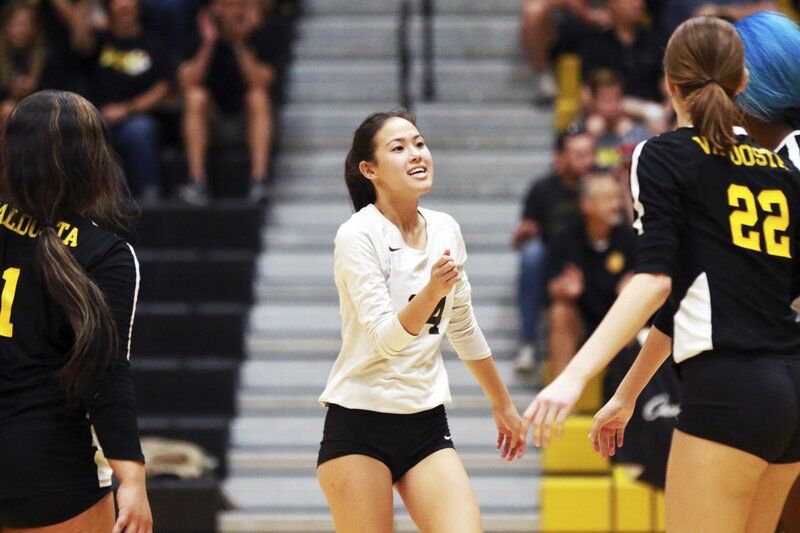 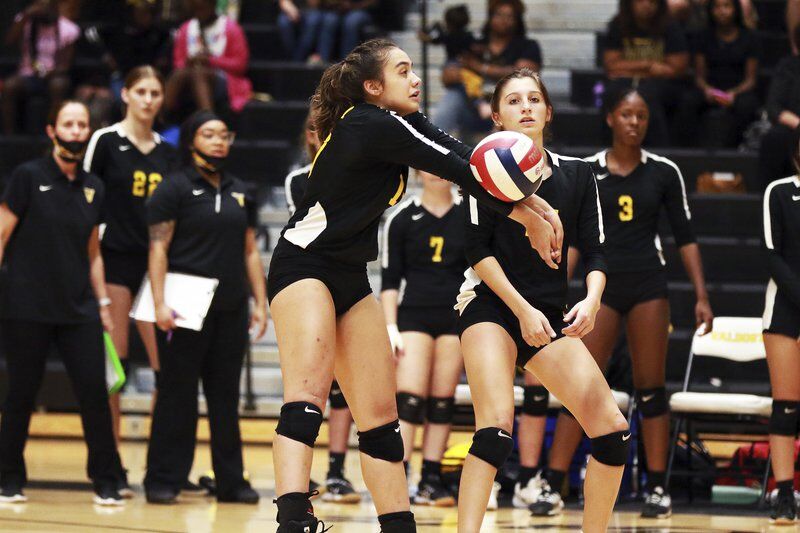 Shane Thomas | The Valdosta Daily TimesValdosta senior outside hitter Isa Kassum returns a ball during a 6A State Playoff match against Creekview Saturday. 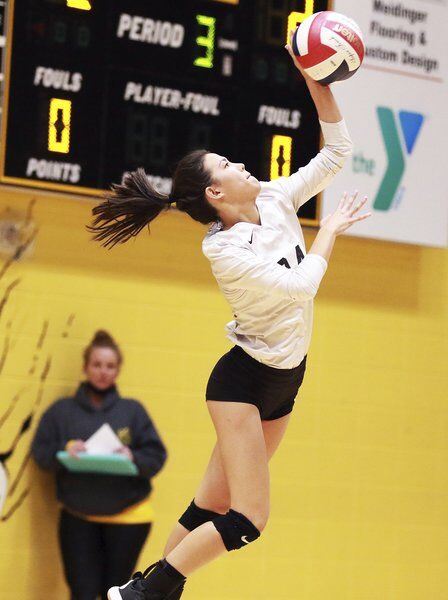 Shane Thomas | The Valdosta Daily TimesValdosta senior outside hitter Isa Kassum returns a ball during a 6A State Playoff match against Creekview Saturday.

VALDOSTA – A historic season for Valdosta High volleyball came to an end in a 3-0 home playoff loss to Creekview Saturday.

Entering the playoffs in the midst of a slump that saw them lose seven of their last 10 matches, the Wildcats opened the state playoffs on the road at Grovetown, where they pulled out a five-set thriller for the first playoff win in program history.

On Saturday, the Wildcats dug deep with their season on the line – raising their level of play to hang with a tall and talented Grizzlies team in the first home playoff match in their program's five-year history.

After a pair of back-and-forth sets that saw the Grizzlies win 25-20 and 25-22, the Wildcats had a sluggish start to the third set as the Grizzlies jumped out to a 14-7 lead. The slow start allowed the Grizzlies to push their lead to 23-11.

Down but refusing to go down without a fight, the Wildcats cut the deficit to 23-16.

Unfortunately for the Wildcats, the surge was came too late as a missed serve by junior Erin Halter ended the run. The Grizzlies were able to secure the win as the Wildcats were unable to prevent a final point.

As a team, Valdosta finished with four aces.

"It was probably one of the best games we've played this season," Valdosta head volleyball coach Anna McCall said. "I'm very excited that we showed up today and everybody stepped up and everybody played their game. It's hard – when you get those Atlanta teams that have had programs for decades. The speed of the game and the fact that most of them have been playing since they were 8, 9, 10 years old. This is only our fifth year as a varsity, so we have a long way to go. But I'm extremely proud of the girls. We had a little setback there in the third set, but we picked it back up and we ended on a good note. I'm extremely proud."

Against a Grizzlies team that boasted at least five players 5-9 or taller at the net, the Wildcats were unable to get many clean opportunities for kills. The height of the Grizzlies also allowed for them to find soft spots in the Wildcats' defense to score points and attack.

Senior middle blocker Morgan McClure led the Grizzlies with 17 kills in 22 attempts. Seniors Ellie Johnson and Alivia Mynes combined for 21 kills as the team finished with 49 points, 50 digs and eight aces for their third straight victory.

"Obviously, there were a couple of spots that we just couldn't stop," McCall said of the challenges presented by the Grizzlies. "The girls knew, but the girls did their best. But in games like this, you've got to adjust right away or the game will go away from you. They were trying, but (Creekview) had those tall middles that put us away."

With their season coming to an end, there were plenty of tears but also many smiles and hugs to go around between the team, its coaches and the throng of supporters that cheered for them throughout the season.

The team huddled on their side of the net as McCall imparted her final message of the season to her squad.

"I told them to hold their head up high," McCall said. "They're Wildcats. Keep playing, and I told my seniors, 'Don't stop here. Keep playing when you go to college. Stay with the sport. Become coaches, so you know what we go through,' because it's taken off in the south and we need more coaches that have played before. We need to start younger so we can compete with teams up in Atlanta."

A senior-laden roster, the Wildcats will bid farewell to eight seniors that filled the 13-woman roster.

With several key players coming back, namely juniors Mason Holtzclaw and Keona Martin and sophomore libero Flora Shen, McCall is optimistic about the future of the program.

According to McCall, the team has established a grade school to middle school pipeline to develop a new crop of Wildcat volleyball for years to come.

"Obviously, it hurts when seniors leave but we'll practice and we'll get better and in each grade level from now on, we're going to have about 10 players per grade level," McCall said of the future of Wildcat volleyball. "We'll keep building, keep building and work hard in the summer. We'll get it done. We'll keep getting better."