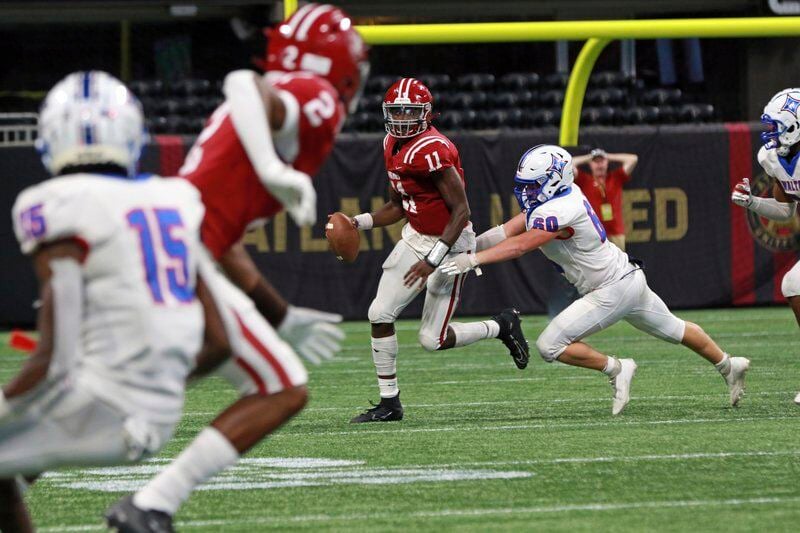 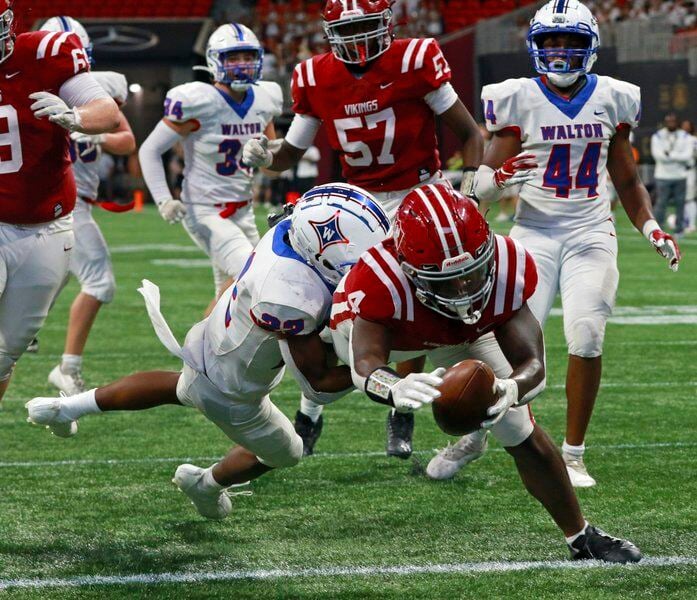 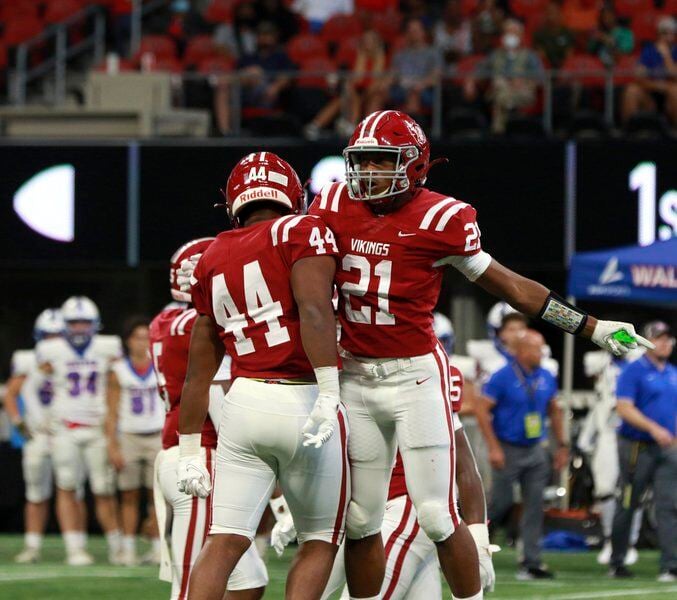 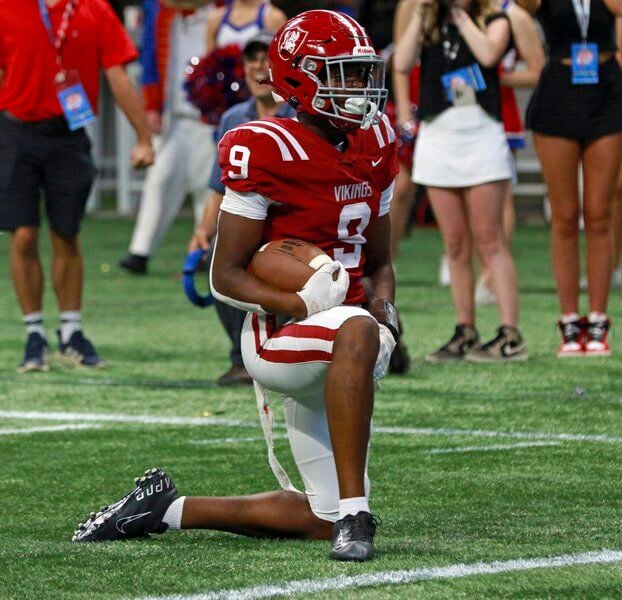 Shane Thomas | The Valdosta Daily TimesLowndes wide receiver Khris Thomas (9) kneels after making a catch late in the fourth quarter against Walton in the Corky Kell Classic Saturday at Mercedes-Benz Stadium in Atlanta. Thomas had four catches for 80 yards in Lowndes' 34-28 loss to Walton. 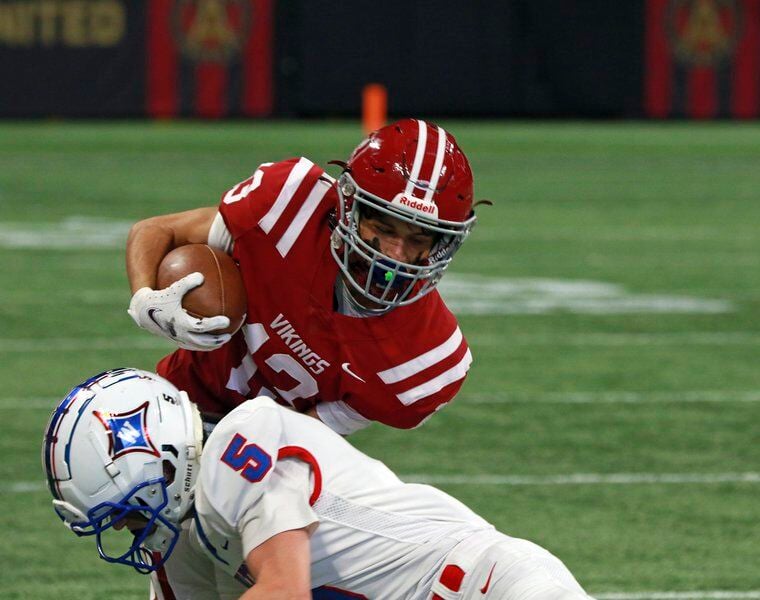 Shane Thomas | The Valdosta Daily TimesLowndes wide receiver Tate McGee (13) tries to get around Walton corner back Will Jordan (5) in the Corky Kell Classic Saturday at Mercedes-Benz Stadium in Atlanta.

Shane Thomas | The Valdosta Daily TimesLowndes wide receiver Khris Thomas (9) kneels after making a catch late in the fourth quarter against Walton in the Corky Kell Classic Saturday at Mercedes-Benz Stadium in Atlanta. Thomas had four catches for 80 yards in Lowndes' 34-28 loss to Walton.

Shane Thomas | The Valdosta Daily TimesLowndes wide receiver Tate McGee (13) tries to get around Walton corner back Will Jordan (5) in the Corky Kell Classic Saturday at Mercedes-Benz Stadium in Atlanta.

The Lowndes Vikings almost did the impossible against the Walton Raiders, coming back from a 28-14 deficit with 1:50 left to force overtime, but ultimately fell to Walton 34-28 in Saturday's Corky Kell Classic at Mercedes-Benz Stadium.

Let's dive right in and hit a few of my Extra Points.

I've covered so many games. Very few end in the way this game did. The Vikings rallied from 14 points down with 1:50 left to send the game to overtime. Though highly unlikely, Lowndes coach Jamey DuBose must've caught wind of my tweet.

“At 28-14, you thought it was over. You were getting ready for the speech after the game,” DuBose said. “I believed in these kids. I will never not believe in them, and they believed in it and we’ve got coaches that believed. It showed up tonight. I’m just proud of the effort. I’m proud of the fight. I’m not proud that we lost, but I’m proud of us growing as a football team.”

Though the Vikings went on to lose on a late score by Walton's Sutton Smith, the attitude around the team was generally positive.

"We're just going to build," Lowndes quarterback Jacurri Brown said. "You can't really take anything from this team we've got. We worked. We fought. You saw nobody blaming each other. You saw nobody pointing fingers. ... We're going to be just fine, for sure."

It always seems impossible until it is done. The Vikings almost did it and for my first visit to Mercedes-Benz Stadium, it will be a game I'll remember for a long, long time.

Going into the season, the biggest story in camp was wide out Chase Belcher being moved to running back.

After seeing Belcher play well in the team's preseason scrimmage against Eagle's Landing Christian back on Aug. 7, it appeared the move was permanent.

However, after Saturday's game, I'm not so sure Belcher's going to be in the backfield much longer.

Belcher caught all three of Brown's touchdown passes against Walton, including the game-tying touchdown as time expired. And what a catch it was. Brown rolled out to his right and Belcher seemed to be doing the same in the end zone.

As Brown fired the pass downfield, Belcher went up to get it and had the presence of mind to get his feet down inbounds as his momentum sent him crashing to the turf. It was a special play by a special player.

As a running back, Belcher had 12 carries for 40 yards. At his more natural wide receiver position, Belcher had five catches for 46 yards.

With the tantalizing potential of running back Jacarre Fleming – who had six carries for 32 yards against Walton – it may not be a stretch to suggest Belcher could be back at wide receiver by the time we get to region play.

Everyone knows what Jacurri Brown can do with his legs. Much of the talk during Brown's time with the Vikings has revolved around his development as a passer.

Against Walton, Brown offered what could be best described as one of his most complete games he's ever played.

On the ground, Brown had 22 carries for 152 yards and a second-quarter touchdown. Through the air, Brown completed 10 of 19 passes for 164 yards with three touchdowns and no interceptions. If you want to pick nits, Brown did have one fumble that he lost in the game, but that one miscue proved harmless.

Brown's progression as a passer looks promising. He completed the short balls and the deep ones. His running ability will always keep teams honest. Sure, it's only the first game, but Brown's ability to punish teams as a true dual-threat is the key to the Vikings' success moving forward.

I've touched on the impact Chase Belcher made Saturday, but I'd be remiss not to recognize the work of two new faces on the receiving corps: Newcomers Khris Thomas and Tate McGee.

Thomas, a transfer from rival Valdosta, looked good in his debut in crimson and white – catching four passes for 80 yards, including a leaping catch that set up Belcher's game-tying touchdown at the end of regulation. The 6-foot-1, 175-pound senior proved himself as a nice complement to Belcher on the left side of the field.

McGee also made an impact with a pair of catches for 43 yards. Midway through the fourth, McGee had what appeared to be a diving catch ruled incomplete. The pass would've given the Vikings a critical first down. At any rate, McGee could be an X-factor in the slot for the Vikings, especially with Brown looking like a legitimate passer from the jump this season.

The Concrete Curtain is a lot younger than in past years after losing much of its vaunted unit to graduation. For the first 12 minutes, it appeared the Vikings were going to be run off the field by Walton.

After spotting Walton a 14-0 lead within the first five minutes, the Vikings buckled down and held the Raiders scoreless for the next two quarters – giving the offense time to tie the game at 14 in the third quarter. Though they gave up some big plays to the Raiders, they should be proud of the job they did in the middle two quarters to avoid getting blown out.

Penalties were a problem for the Vikings as they were flagged for 14 penalties for 115 yards. With such an inexperienced team, penalties are inevitable in the first game of the season. The team cleaned up many of the mistakes that haunted them throughout, maintaining its discipline long enough to rally and make the game interesting down the stretch.

6) Looking ahead to Griffin

Lowndes is 4-0 all-time against Griffin. Most recently, the Vikings defeated the Bears 45-6 on Sept. 11, 2020 in DuBose's first season leading the Vikings.

The Vikings will be looking to avoid their first 0-2 start since 1989. Kickoff for Friday's game is scheduled for 8 p.m.