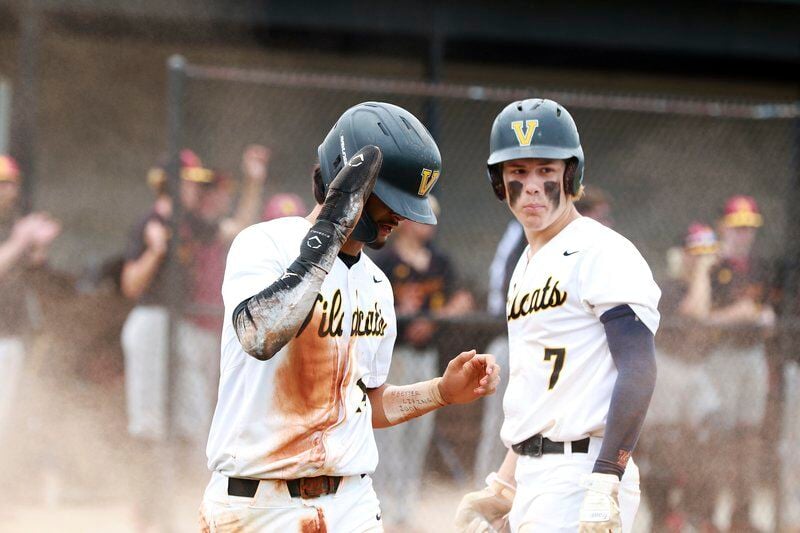 Shane Thomas | The Valdosta Daily TimesValdosta first baseman Eli Batts (14) rises from a cloud of clay after sliding into home plate to score during Game 1 of a GHSA Class 6A state playoff doubleheader against Lassiter Wednesday at Bazemore Field. 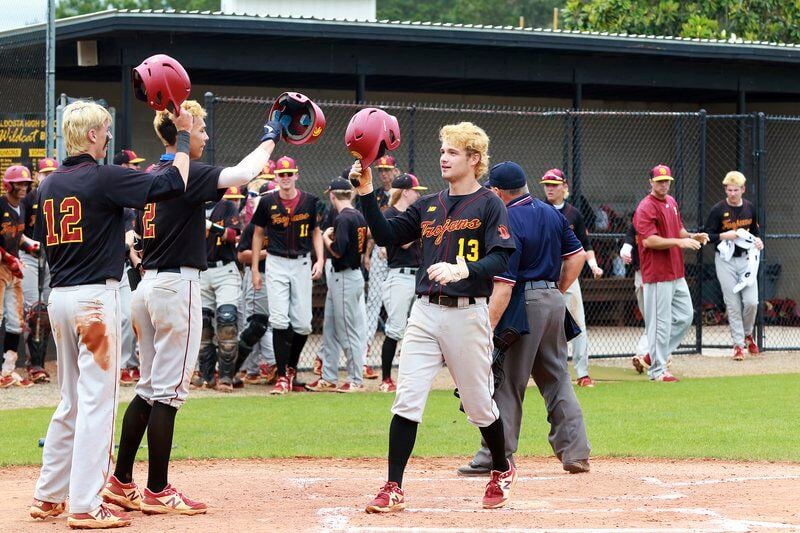 Shane Thomas | The Valdosta Daily TimesLassiter outfielder Parker Hughes (13) knocks helmets with teammates Bradley Frye (2) and Trey Griffin (12) at home plate after hitting a home run in the second inning of Game 1 of a GHSA 6A state playoff doubleheader against Valdosta Wednesday at Bazemore Field. 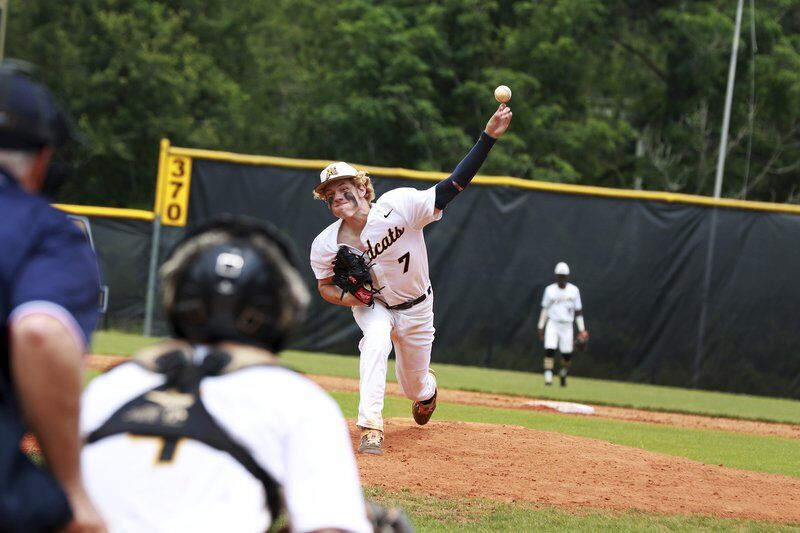 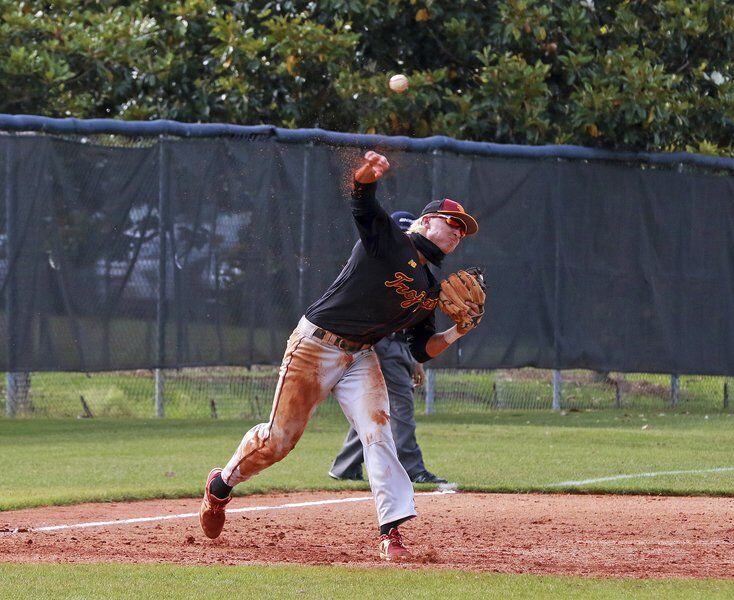 Shane Thomas | The Valdosta Daily TimesLassiter third baseman Kyle Carlson (7) makes a throw to first during Game 2 of a GHSA 6A state playoff doubleheader against Valdosta Wednesday at Bazemore Field. 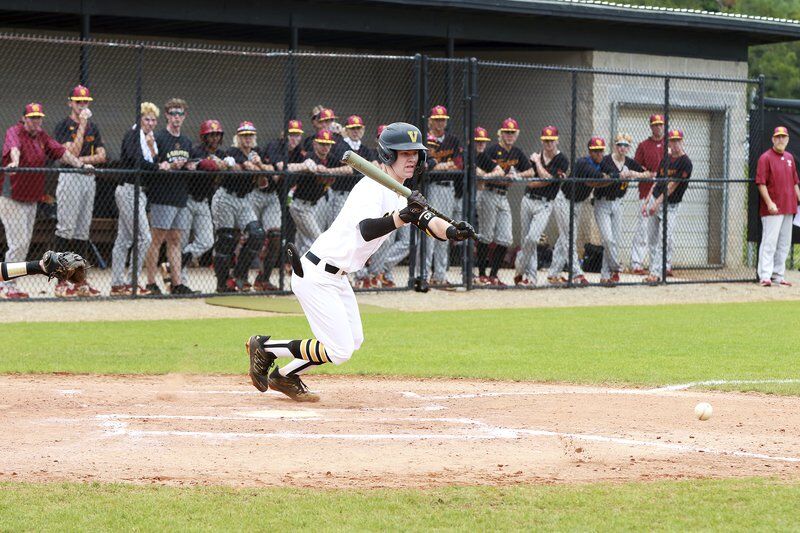 Shane Thomas | The Valdosta Daily TimesValdosta's Cole Porter (1) lays down a bunt during Game 1 of a GHSA 6A state playoff doubleheader against Lassiter Wednesday at Bazemore Field. 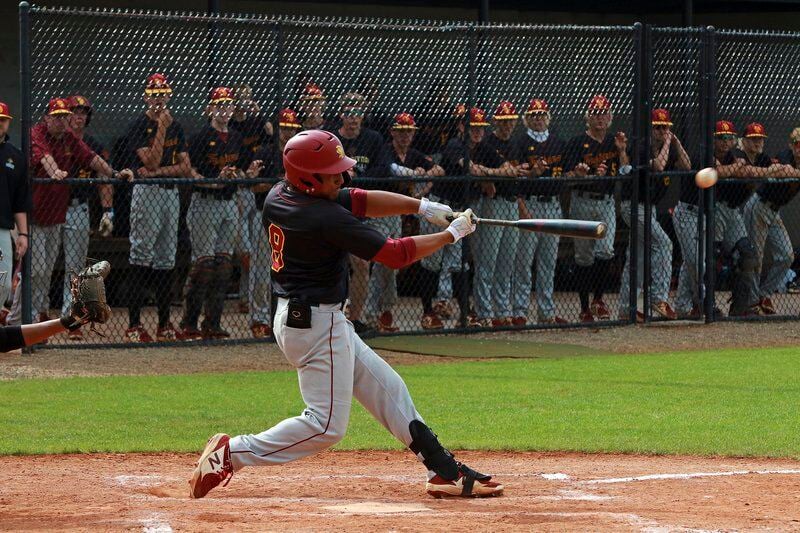 Shane Thomas | The Valdosta Daily TimesLassiter first baseman Ryan Martin (8) gets a hit during the second game of a GHSA 6A state playoff doubleheader against Valdosta Wednesday at Bazemore Field. Martin went 2-for-3 with two RBIs in the Trojans’ 8-1 victory.

Shane Thomas | The Valdosta Daily TimesValdosta first baseman Eli Batts (14) rises from a cloud of clay after sliding into home plate to score during Game 1 of a GHSA Class 6A state playoff doubleheader against Lassiter Wednesday at Bazemore Field.

Shane Thomas | The Valdosta Daily TimesLassiter outfielder Parker Hughes (13) knocks helmets with teammates Bradley Frye (2) and Trey Griffin (12) at home plate after hitting a home run in the second inning of Game 1 of a GHSA 6A state playoff doubleheader against Valdosta Wednesday at Bazemore Field.

Shane Thomas | The Valdosta Daily TimesLassiter third baseman Kyle Carlson (7) makes a throw to first during Game 2 of a GHSA 6A state playoff doubleheader against Valdosta Wednesday at Bazemore Field.

Shane Thomas | The Valdosta Daily TimesValdosta's Cole Porter (1) lays down a bunt during Game 1 of a GHSA 6A state playoff doubleheader against Lassiter Wednesday at Bazemore Field.

Shane Thomas | The Valdosta Daily TimesLassiter first baseman Ryan Martin (8) gets a hit during the second game of a GHSA 6A state playoff doubleheader against Valdosta Wednesday at Bazemore Field. Martin went 2-for-3 with two RBIs in the Trojans’ 8-1 victory.

VALDOSTA –– There were hugs, memories and plenty of tears.

The Valdosta Wildcats' improbable run to the Elite Eight ended with a two-game sweep by the Lassiter Trojans (30-6) Wednesday.

Though the Game 2 clincher was knotted 1-1 through three innings, the Trojans pulled away for an 8-1 win –– tallying 12 hits in the contest.

After the game, several Valdosta players openly wept as they hugged one another and the coaching staff long after the game concluded.

This year's Wildcats team started the season 6-7 and found itself on the periphery of the playoff hunt early on. According to Valdosta head coach Brad Porter, once the team overcame injuries and learned to play for one another, that's when the season began to turn around.

"The first thing about this senior class is that it was my first class," Valdosta head coach Brad Porter said. "They were freshmen when I came in and we played in the Elite Eight then, we played in the Sweet Sixteen, we had a COVID season and we're back in the Elite Eight again. This group has done miraculous things. They've never not been to the playoffs. They've never not been to the second round and so I attribute a lot to our senior class and the leadership that they've been able to carry on. They've learned from the other classes and they're passing the torch.

"As far as us starting off this year a little sluggish, we started off the year playing a little bit as individuals. We were able to bond together and become a family and get over some injuries, get over some quarantines and were able to put our entire team on the field. Once we got that one unit out there and they started playing together and passionately caring about each other, it made all the difference in the world."

The Trojans caught fire in the fourth inning –– scoring three runs in the bottom of the fourth to create separation.

Senior outfielder Cameron Campbell led off the fourth inning with a base hit, followed by an RBI double by junior Ryan Martin to put the Trojans ahead 2-1. On the next at-bat, senior catcher Ryan Stephens delivered a sacrifice fly RBI to bring pinch runner Dixon Noland around to score to push the lead to 3-1. Though third basemen Kyle Carlson flew out for the second out of the inning, the Trojans were far from done as Max Beck-Berendsen reached safely on a late throw to first by Valdosta. Trey Griffin made the Wildcats pay with a base hit, followed by another RBI single by Benjamin Norton to give the Trojans a 4-1 lead.

After Game 2 starter Walker Noland went 1-2-3 to get out of the top of the fifth, the Trojans continued to distance themselves at the plate.

Bradley Frye led off with a bunt single to put one man on. Valdosta’s Game 2 starter J.D. Smith struck out Campbell and Dixon Noland swinging, but the Trojans responded with an RBI double up the middle by Stephens and an RBI single by Carlson to put the Trojans up 6-1 heading into the sixth inning.

From there, the Trojans’ defense held strong to prevent the Wildcats from getting into a rhythm. Noland struck out Lamonte Lindon before giving up a single to Elijah Guilliams. Despite the hit, Smith grounded into a double play to end the top half of the sixth.

In the bottom of the sixth, Griffin delivered a lead-off single for the Trojans’ ninth hit of the game –– prompting Porter to pull Smith in favor of senior William Richards. Even with one of their aces coming in to stop the bleeding, the Wildcats couldn't slow down the Trojans as Parker Hughes got a single off Richards that sett up a two-run RBI double by Frye for the final margin.

Prior to the start of the seventh inning, Porter brought the team and every member of the coaching staff together in the dugout. With everyone surrounding him, Porter imparted an impassioned message to the group.

"Our legacy is that we fight and that we love each other and we compete together," Porter said of the moment. "That's what we wanted to do whether we had three more outs or if we scored 20 more runs. Our legacy is the way that we care about each other and I just wanted to remind those guys that that needed to be the foremost of what people left here thinking about Wildcat baseball was how we compete."

With the Trojans' offense humming and a stellar defensive performance led by Carlson’s work at third base, Valdosta only produced two hits in the close-out game.

Noland picked up the win, going seven innings with three strikeouts and two walks in the game. On the Valdosta side, Smith went five innings – giving up 10 hits, seven runs (six earned) and a walk while striking out four in the loss.

"They played incredible defense," Porter said of the Trojans. "They made every play. Their third baseman is the best I've seen in high school baseball in a long time as far as defensive plays. They just made some incredible plays. The shortstop made some incredible plays and we didn't make a couple of plays. They're an outstanding baseball team and you just tip your hat to them and just move forward. They won the baseball game, won the doubleheader today and we applaud them. We love our kids."

Despite a 23-minute rain delay, the Trojans managed to pull out a 5-2 victory in Game 1.

The Trojans scored three of their five runs in the second inning as Griffin doubled to right field to set up a sacrifice fly by Norton that brought in Carlson to make it 2-0 for Lassiter.

On the next at-bat, Hughes smashed a two-run home run off of starting pitcher Elijah Guilliams to put Lassiter ahead 4-0.

Valdosta cut into the deficit in the bottom of the second with a sacrifice fly by Lindon that made it a 4-1 game.

Norton found himself in a tight situation in the bottom of the third after giving up a pair of singles and walking Valdosta’s Jy’Kel Davis to load the bases. On the ensuing at-bat, Norton issued a walk to Lindon to bring another run across to bring Valdosta to a 4-2 deficit.

Norton got Guilliams to fly out to end the inning and escape the jam.

The Trojans put the finishing touches on the game in the top of the sixth with an RBI single by Frye that scored Hughes to push the lead to 5-2.

Harris Bryson came on for the save, retiring three straight Valdosta batters to end the game.

“It’s all about staying focused, staying locked in,” Lassiter head coach Kyle Rustay said of the rain delay. “We talked about it before the game –– we want to be intense, we want to be focused and we want to be aggressive in what we were doing out there. During that time, guys were frustrated, 'Can we play through this?’ It’s not about that. It’s not your decision. Control what you can control, stay in the moment and be focused on the task at hand. I felt like Ben Norton actually came out of that rain delay sharper than he was before the rain delay. Again, it was just a matter of staying in the moment and staying focused on the job."

Bradley Frye, Kyle Carlson and Trey Griffin each went 2-for-3 at the plate as well.

Guilliams and Cole Porter each had two hits for Valdosta in the loss.

Guilliams picked up the loss for the Wildcats in a five-inning outing. The senior threw 103 pitches with only 58 going for strikes. He allowed seven hits, four earned runs and walked three with four strikeouts. Reliever Cooper Samples pitched two innings with three hits and an earned run.

With the two-game sweep of Valdosta, Lassiter is on a four-game winning streak heading into the Final Four of the state playoffs.

Valdosta finishes the 2021 season with a 20-13 record and bids farewell to six seniors from this year's roster. Though the end of his team's season is still a fresh wound, Porter feels good about the future of the Wildcats moving forward.

"The senior class is going to leave some big shoes to fill," Porter said. "We feel good about what we're building here. We feel good about the legacy that these seniors are leaving behind. I just told them that everything we do from this moment forward, they have been a part of the foundation that's being built in this program. We really feel good about next year and the following year. Again, it's going to be how much we play Wildcat baseball and stay within the culture and the core beliefs that we have. It's family and heart."