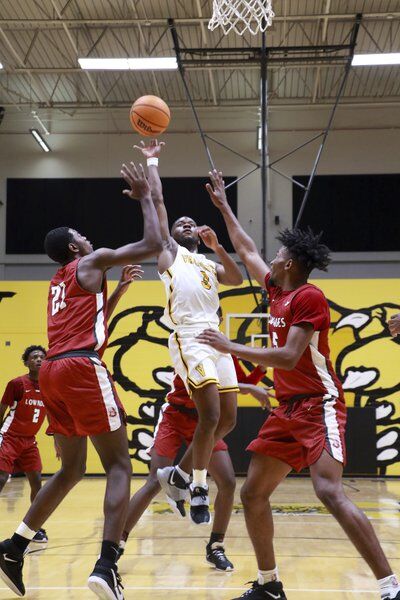 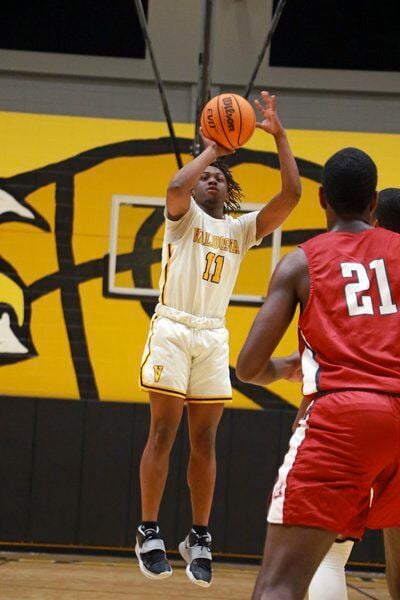 Shane Thomas | The Valdosta Daily TimesValdosta guard Stanley Haliburton (11) shoots a 3-pointer during the first half against Lowndes Saturday. 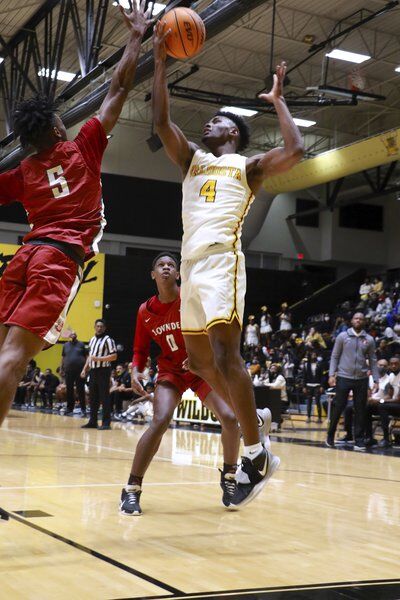 Shane Thomas | The Valdosta Daily TimesValdosta forward Ty'addrian Newsome (4) battles with Lowndes' JaQuan Walton (5) for a rebound during the first half Saturday. 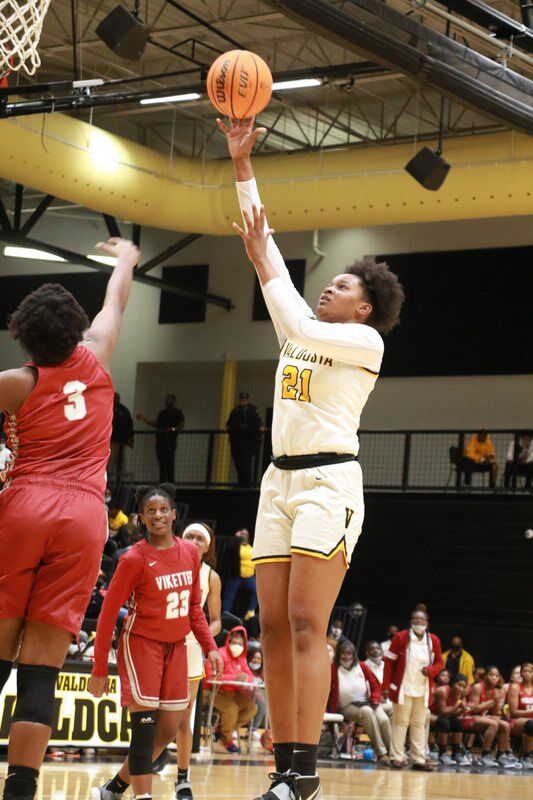 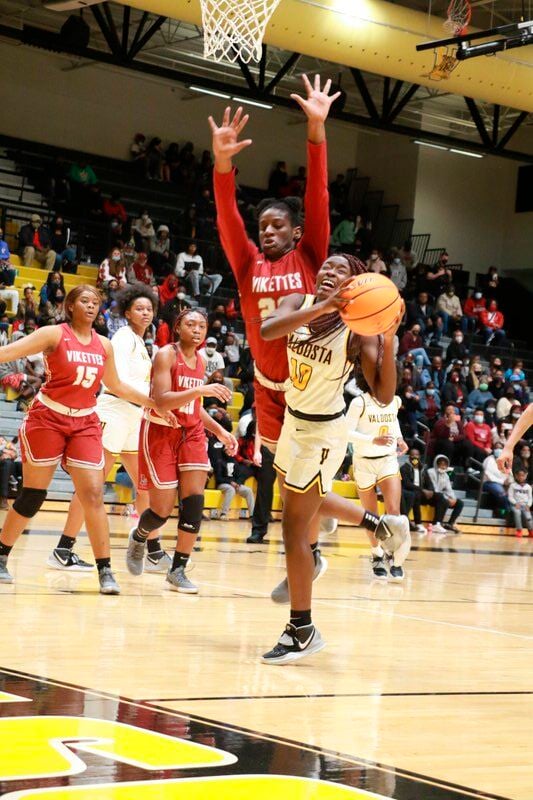 Shane Thomas | The Valdosta Daily TimesValdosta guard Stanley Haliburton (11) shoots a 3-pointer during the first half against Lowndes Saturday.

Shane Thomas | The Valdosta Daily TimesValdosta forward Ty'addrian Newsome (4) battles with Lowndes' JaQuan Walton (5) for a rebound during the first half Saturday.

VALDOSTA –– The Valdosta Wildcats made six of their 12 three-pointers in the second half to sink rival Lowndes 73-55 on Saturday.

Senior point guard Dorrien Douglas poured in a game-high 21 points and nine rebounds to lead the 'Cats to victory. Douglas knocked down five of his eight 3-point attempts in the game, three coming early in the third quarter.

Overall, the 'Cats hit 12-of-26 from 3-point land to secure their fourth straight win.

"We've been working on our shooting a lot and our defense," Valdosta head coach Darrell Lockhart said after the game. "We're getting there. We feel like, if we're able to shoot the ball against some teams, that'll give us a better chance of winning some big games."

Leading by 18 points at the half, Valdosta opened the third quarter on an 11-3 run –– nine points coming on three consecutive 3s to open the period. A layup by Smith gave the 'Cats a 49-23 lead midway through the quarter.

Valdosta led 54-34 heading into the fourth quarter, but Lowndes began to show some signs of life with a 6-1 spurt.

Playing against his brother Jacques, Aaron Williams put the finishing touches on the night –– burying three consecutive 3s to push the lead to 73-51 with 1:16 remaining in regulation.

Though the 'Cats didn't shoot great from the floor overall –– just 33% –– the hot shooting from the 3-point line allowed them to put distance between them and Vikings throughout. With their guards making aggressive forays into the paint, the team's improved spacing led to open 3s off of kick-out passes.

"With our size, we've got to be able to space out and make those passes," Lockhart said of the team's ball movement to create open looks. "That'll give us a chance to make some easy buckets. When we're penetrating, it's so congested up in there and they've got the big boy up in there blocking everything. We've got to space out against teams like this."

Jacques Williams had 13 points on 5-of-15 shooting along with five rebounds, five assists and five steals for the Vikings. Jayvon Hutchinson and Darmarcus Black each scored 10 points, while junior big man JC Riley nearly had a triple-double with 10 points, 16 rebounds and nine blocked shots.

The Vikings shot 34% from the floor and 4-of-18 from 3-point range while committing 22 turnovers in the loss.

"We're looking forward to just playing and keeping the feeling of playing in a playoff game," Lockhart said looking ahead to Thursday's rematch with the Vikings at The Crimson Coliseum. "It's going to have a playoff atmosphere with the fans and we're going to get back and watch this film and pick up on some of the things we can improve upon and work on them."

Faith Johnson's go-ahead three-point play with 1:25 remaining proved to be the difference as Lowndes squeaked past Valdosta 50-44 in the opener.

Following a block by Cody, Lady 'Cats guard Ahnye Wilkins buried a 12-foot jumper along the baseline to tie the game at 44 with 1:39 to play.

After stealing the ball from the Vikings, Wilkins broke away for the potential go-ahead layup but the ball rolled off the rim, eliciting a loud groan from the crowd.

After Johnson's and-one, the Lady 'Cats got the ball to Cody at the top of the key, but the center seemed confused as she fire a pass to the corner. The pass flew high over the receiver's head for a Valdosta turnover.

Looking to cut into the deficit, Valdosta got what appeared to be an open 3-point attempt by Denver Arnold, but the shot was blocked by the Vikettes' Myah Espanol with 36 seconds left.

Espanol calmly sank two free throws, then Johnson split a pair with 16.6 seconds to go to secure the victory.

Otalfo Esenabhalu had a game-high tying 13 points in the win. Johnson finished with 12 points for the Vikings –– five of which coming in the fourth quarter. Taje Middleton scored all 10 of her points in the second quarter.

Cody led the Lady 'Cats with a double-double performance –– finishing with 13 points, 10 rebounds, nine blocks and four steals, but made just 4-of-10 from the free throw line.

As a team, Valdosta shot 28% from the field and committed 24 turnovers in the loss.

Valdosta head coach E.A. Wilcox lamented his team's poor free throw shooting after the game. The Lady 'Cats went 9-for-20 from the stripe and 5-of-20 from beyond the arc in the loss.

"We missed a lot of free throws tonight," Wilcox said. "We played a terrible first half. God awful. I told the girls that. I said, 'We played a terrible first half, but we're only down eight. We didn't go inside to Essence and we played bad, but I said I think we're going to be fine. Coming out the second half, we're going to be more aggressive. We're going to go inside more and get it to my bigs. We fought hard, fought back, played defense, but at the end of the game, we blew some key layups in crunch time. We needed to make those layups, we needed to make those free throws, and we came up short."

Valdosta still sits atop Region 1-6A with a 4-2 record. Despite losing so much firepower from last year's Final Four team, Wilcox has the Lady 'Cats in contention once again.

"It doesn't hurt us in the region," Wilcox said. "It's a home rivalry game and it's important to the community and fans, but keeping it in perspective, it doesn't hurt us. We're still No. 1 in the region. We're still going into our region as a No. 1 seed. We're still hosting here so I'm still proud of our young ladies for our effort the entire year. A lot of people thought when we lost eight seniors from last year, we wouldn't be in this position."

Valdosta travels across town to face Lowndes at their place on Thursday. Tip-off for the girls game is scheduled for 6 p.m., followed by the boys at 7:30 p.m.

"Even though the loss to Lowndes affects us as far as pride is concerned, and of course I want to win every game, but we didn't win this one," Wilcox said. "We've still got them over there, so we've got another opportunity to get back at them on their floor. I'm real optimistic about our chances. We know what we have to do when we compete with them again. We'll clean up our minor mistakes. We are a much better team than what we displayed today."